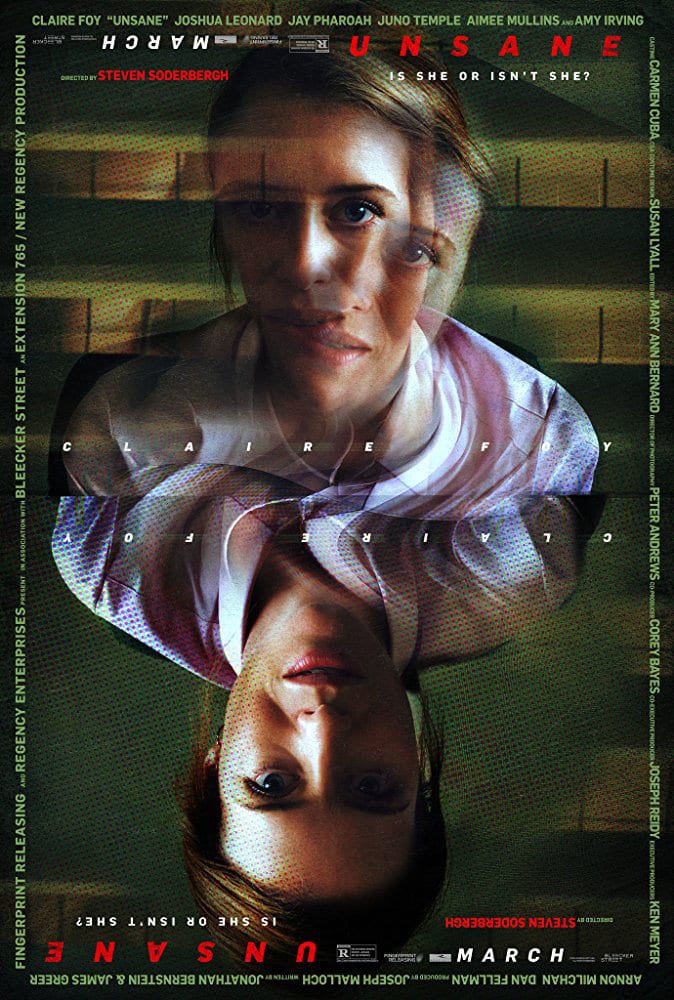 If Claire Foy’s face isn’t familiar to you, you’ll become intimately familiar with her every pore in Steven Soderbergh’s Unsane, in which she plays hard-nosed, erratic businesswoman Sawyer Valentini, who’s consumed with a stalker complex that twists even the most mundane social interactions into fight-or-flight emergencies. Shot on iPhones, the movie’s most enduring images see the smartphones positioned uncomfortably close to Foy’s terror-filled mug, giving the actor — and the audience — no place to hide. The raw imagery and minimalist sound design create an overwhelming sense of panic and disorientation, and while the sotry is less intoxicating in its later acts (the genre scaffolding becomes increasingly apparent as the story unfolds), the unbridled energy of both Soderbergh’s direction and Foy’s performance make it one of the most unnerving psychological thrillers in recent memory.

“I’m not rational,” says Sawyer to her counselor, an admission that ultimately leads to her being involuntarily admitted to Highland Creek Behavioral Center. While initially insulted that anyone would deem her mentally unfit to continue to lead her life outside of a mental institution, her instability is put on full display when she sees the man who’s been stalking her for years, masquerading as one of the ward’s staff members… or so she believes. Soderbergh does a fantastic job of putting you into Sawyer’s headspace, using ultra-close proximity mobile devices afford (think Dreyer’s The Passion of Joan of Arc, but on PCP) to make you truly feel her paranoia. And yet, enough information about her past is withheld to keep her in the “unreliable narrator” category, which makes the story unsettling in the best possible way.

Surprisingly early on, however, the truth of Sawyer’s situation is unveiled, which effectively kills the beautifully palpable sense of disorientation that fuels the first act. What follows is a perfectly tense, frightening, and artful suspense thriller, but with the fog of confusion lifted, the momentum is lost. Some fascinating ideas do rise to the surface — echoes of the #MeToo movement ring throughout, and the natures of obsession and abandonment are explored from interesting angles — but the narrative movements will feel all too familiar to fans of the genre.

Thankfully, it’s hard to dwell on a plot’s predictability when the performances are so riveting. Foy is able to portray both strength and self-doubt in any given moment, and by the end of the movie, we feel like we know Sawyer inside and out, from her neuroses and fears, all the way down to the way she eats food. Foy’s attention to detail is stunning. Juno Temple plays Violet, a deranged patient who’ll do anything — scream, sling death threats, throw tampons — to get into Sawyer’s head. We’ve seen the young actress in similar roles before (she’s the veritable queen of cuckoo), but that doesn’t diminish the fact that she absolutely nails it here. Playing Nate, a decidedly less batty bunkmate, is Jay Pharoah, who brings a welcome measure of warmth and maturity to the table (a fun throwaway line references the SNL alum’s reputation as a world-class impressionist).

One of the more complex roles belongs to Joshua Leonard, who plays the Highland Creek staffer who may or may not be Sawyer’s stalker. The Blair Witch Project actor does a fine job of keeping us guessing early on, handing patients their meds with a straight face, but once the secret of the story is revealed, he’s tasked with exploring a much wider range of emotions. Some moments feel more genuine than others, with the script sometimes making him more verbose than necessary (by the end, his mystique is all but gone), but Leonard ultimately proves to be a major asset.

When Unsane first sinks its claws in you, it sinks them in deep — the way Soderbergh knocks loose our grip on reality is paralyzing and unforgettable. But too much is given away too soon. It could be argued that the film is a feminist cautionary tale, and that if the twist was revealed closer to the end, there wouldn’t be adequate time to truly explore the story’s morality. But the truth is, everything that follows the film’s central revelation feels slightly deflated. Narrative issues aside, Foy’s brilliance and the strength of Soderbergh’s vision make Unsane a worthy take on the psychothriller subgenre.