The Russian philosopher and literary critic Mikhail Bakhtin, in his essay “Carnival and Carnivalesque”, wrote about European carnivals as expressions of an “upside-down world” where social conventions and hierarchies, secular and religious authority, and even laws were flouted. During carnivals, inhibitions were discarded, gender roles were subverted, and passion and creativity reigned. Carnival also dissolved barriers between performers and spectators; as Bakhtin observed, all who took part “lived” in its “second world”.

Smith writes that in the post-World War II era, and to some extent even earlier, New Orleans was a “mecca” for gay men, a “sacred city” that, for those who moved there, became “the first stop after the closet door was finally unbolted.” Tennessee Williams discovered its louche charms in the ’30s; he lived in the French Quarter and used the city as the setting for his best-known play, A Streetcar Named Desire. New Orleans gay culture, especially in the ’50s, “exhibited the general trend among gay men and women at the time: a transformation into an exaggerated personality… Particularly expressive was the coded use of camp talk.” Nowadays many gay men see camp and flamboyance as passé, given that gay culture no longer needs to be clandestine to survive. “But in the early days of gay consciousness and liberation, to be gay was to connect with an already established way of speaking, acting, and reacting, and this discrete lexicon served to create bonds and connections where there was safety in community and ultimately acceptance.”

During the ’50s, McCarthyism aimed to expel Communists and homosexuals not only from government employment but from any positions of cultural influence. In New Orleans, however, the gay world “enjoyed an openness and exuberance that seemed to defy the national postwar atmosphere of suppression.” Gay bars prospered in the French Quarter — as long as they paid off cops and mobsters. Members of the close-knit community frequented bars like Miss Dixie’s House of Music (run by two jazz-loving women, Dixie, a lesbian who played saxophone in her own all-female band, and her sister), the Bourbon House, Café Lafitte, and others on Bourbon Street.

In the late ’50s, the circumscribed tolerance fell prey to moral panics instigated by opportunistic politicians and the police. Undercover cops entrapped patrons in bars, gay bashing became a popular pastime of drunken fraternity brothers, and visible signs of effeminacy (dress, makeup, even gestures) could get men arrested. The gay costume parties and revelry of Carnival season moved into private homes and out of the public eye. During this benighted era, a photographer, Jack Uther Robinson, Jr., took pictures of his gay friends as they celebrated Mardi Gras. This group was the nucleus of gay Carnival, and Robinson documented the emerging scene and its “creative force and drive that soon came together to form the first gay Carnival krewe in New Orleans.” The Steamboat Club, an exclusive gay social organization whose prominent members included Clay Shaw, the businessman unjustly prosecuted by the corrupt district attorney Jim Garrison for his purported involvement in the JFK assassination (and smeared in Oliver Stone’s mendacious film JFK), was a member of this circle. The men in this somewhat rarefied world came up with the idea of a gay krewe and turned the private parties in homes into costume balls. 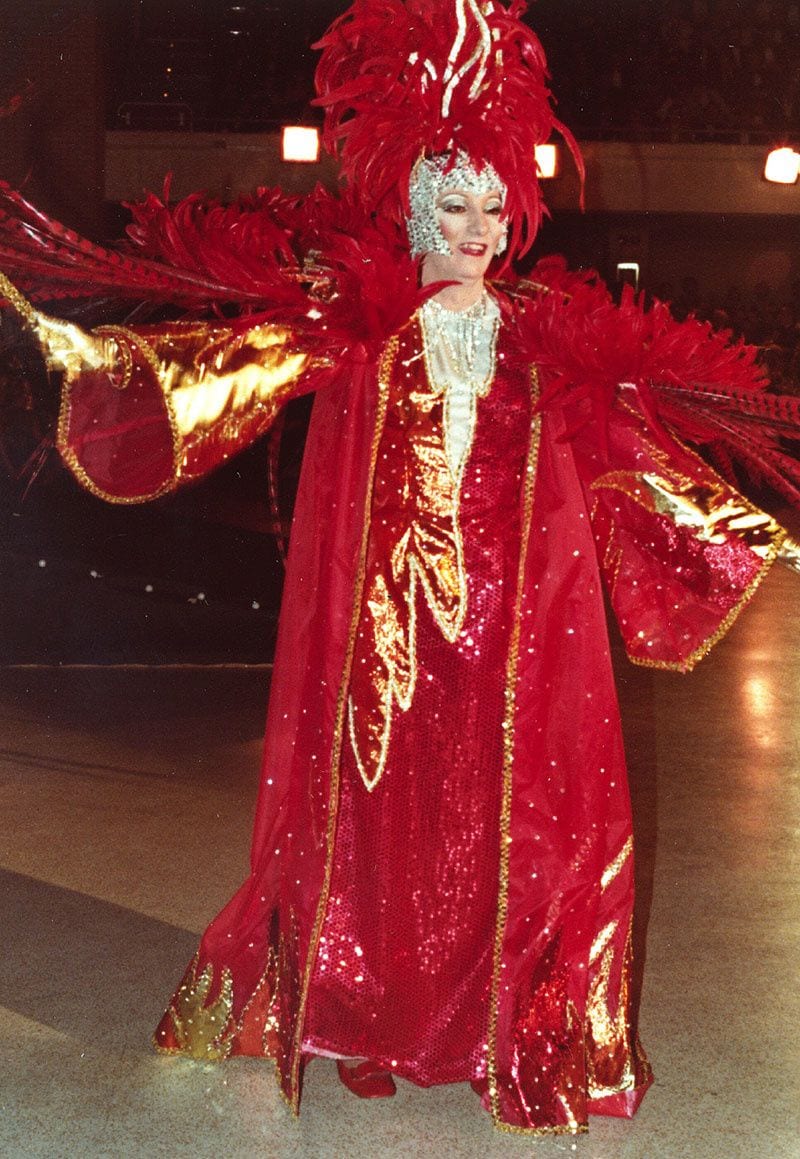 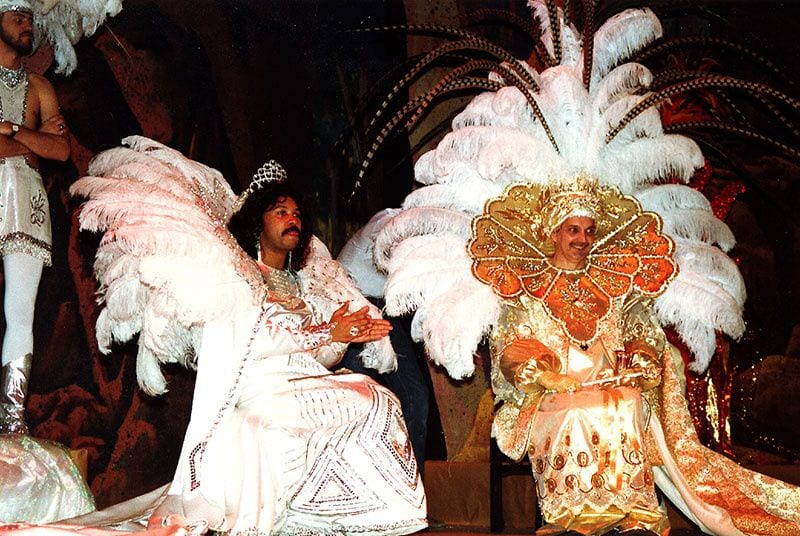 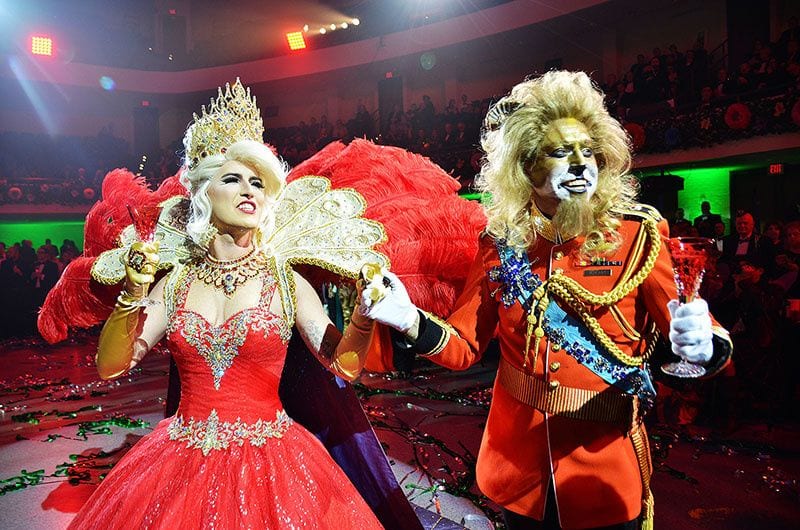 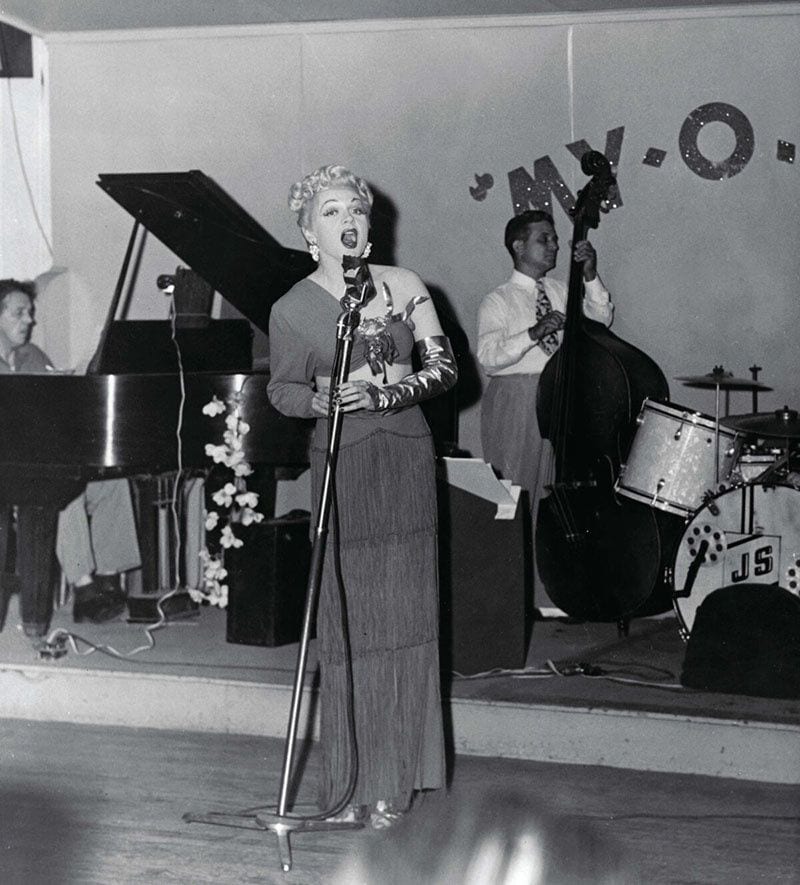 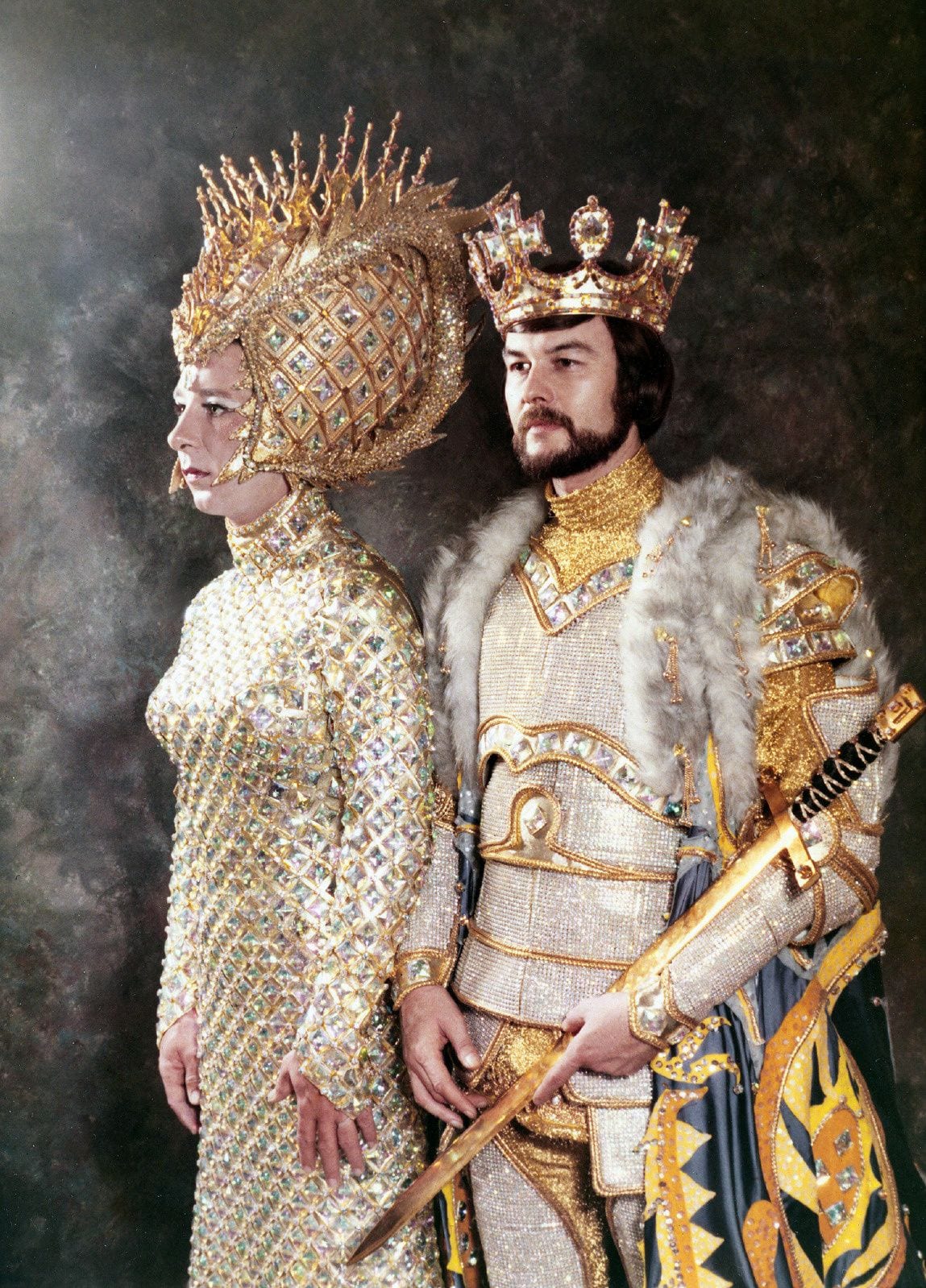 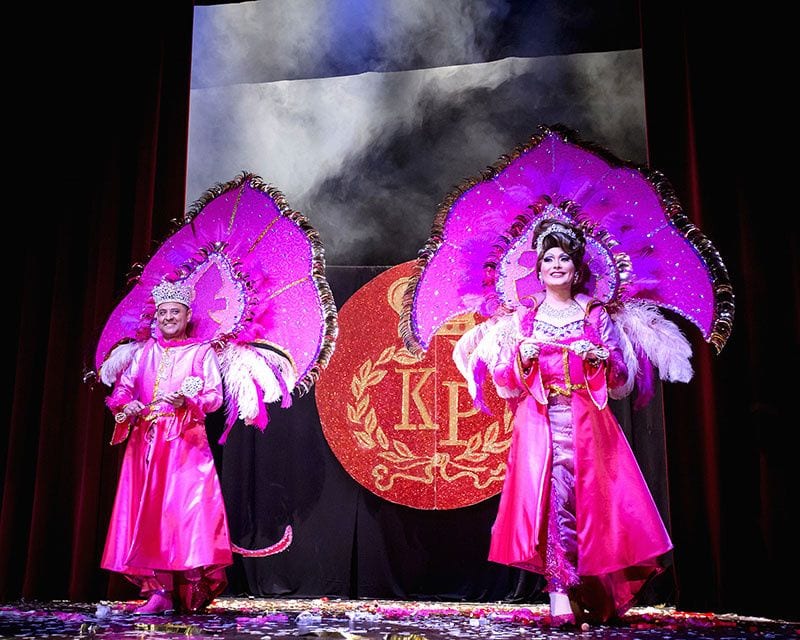 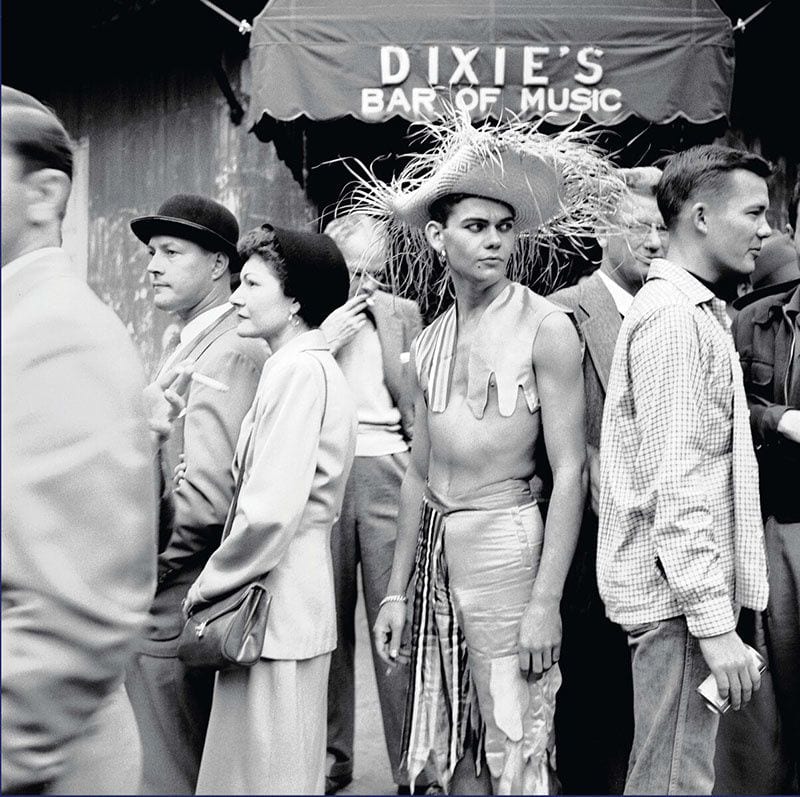 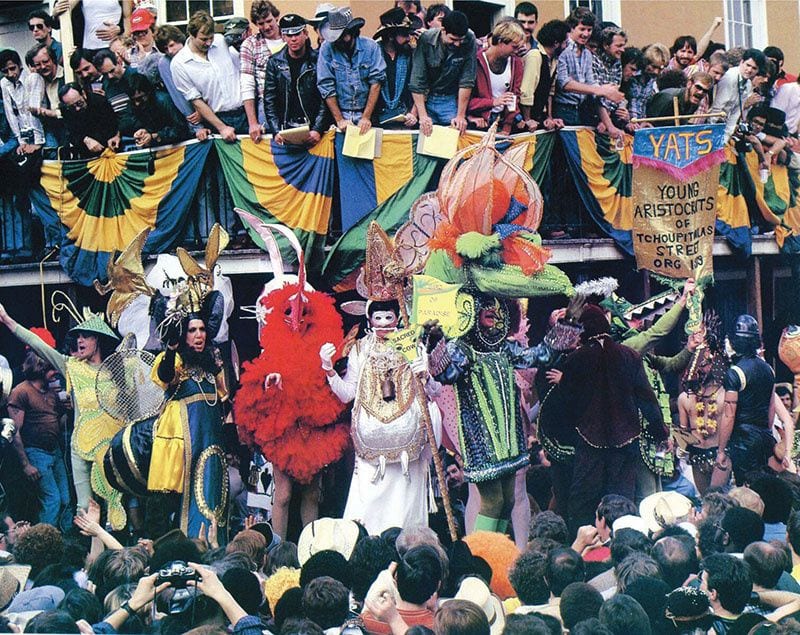 The first gay krewe was the Krewe of Yuga, named after the Kali Yuga of Indian mythology. Police raided Yuga’s fifth ball, held in the suburban town Metairie, and arrested everyone. Guests fled into a nearby forest but most were caught by mounted cops or by K-9 division police with attack dogs. Yvonne Fasnacht, aka Miss Dixie, bailed out her customers. Although she worked her political connections to try to protect the men, the names of all those who had been arrested appeared in local newspapers and most of them lost their jobs. This put a chill on the nascent gay Carnival culture, and the Krewe of Yuga dissolved.

But soon another krewe, Petronius, emerged. The founders decided to obtain a state charter for their new organization and, as a “legitimate” Carnival club, Petronius changed the format of the balls – guests would attend in formal wear, and members of the krewe appeared in costume on a stage, performing in tableaux. The third gay krewe, Amon-Ra, was formed in 1966. By the mid-’80s, there were more than a dozen such krewes. They included Armeinius, Lords of Leather, Ganymede, Apollo, Memphis, Celestial Knights, Ishtar, and Polyphemus. Of the first krewes, only Petronius, Amon-Ra, and Lords of Leather still hold balls. Newer krewes – the African-American krewe Mwindo, the Mystic Krewe of Satyricon, Narcissus, and Star — also present tableau balls. Petronius, the oldest still-active krewe, is 57 years old; it held its first ball in 1962 in Metairie just a week before police raided the Yuga ball. Amon-Ra celebrated its 50th anniversary in 2015; the Krewe of Olympus, founded in 1970, made a huge splash with its “Camelot” ball the following year. “Few other balls have come close to surpassing such artistry”, according to Smith, and photos of the event bear him out: the costumes for Queen Guinevere, Morgan le Fay, and the May Girl (all portrayed by men in drag) were Broadway-worthy, as were the stage sets.

It wasn’t until 2015 that gay krewes paraded down Bourbon Street; for decades they didn’t even try because of high costs and fear of police reprisals. But a poster for the First Annual Parade of the Gay Krewe of Krewes reproduced in Unveiling the Muse indicates how far the gay Carnival culture had come. The poster identifies the four participating krewes and the event’s sponsors – among them, the hotel-casino Harrah’s, the Four Seasons hotel, and the City of New Orleans.

If white gay men could experience harassment, exposure, and violence, despite their economic privilege or social status, another segment of the New Orleans gay population had it worse. Black gay men and women faced a double burden of racist and homophobic exclusion. Gay bars in and near the French Quarter were segregated by race (and gender); in the ’60s and ’70s, these establishments sought to keep blacks out (or keep their numbers minimal) by demanding two or three forms of identification. Only three establishments – Gigi’s, the Safari House, and Café Lafitte in Exile – welcomed black men. The now-famous (some might say notorious) annual Southern Decadence bacchanalia began at a home in the Tremé neighborhood because “African Americans felt they did not belong in the streets.” (Although sometimes called “the gay Mardi Gras”, Southern Decadence is held not during Carnival season but over the Labor Day weekend.) The first grand marshal of Southern Decadence remarks that in the early ’70s, “there were places where blacks wouldn’t have been welcomed in the Quarter.” Black gay men and lesbians had their own bars, but drag bars, which had long featured black performers, “eventually bridged this gap in the gay community.”

Amon-Ra, Polyphemus, and the Lords of Leather were among the first gay krewes to welcome black members. But it wasn’t until 1998 that gay Carnival included an African American krewe. The Krewe of Mwindo was the first all-black gay Carnival organization, and its membership was open to men and women. Today, Mwindo holds tableau balls – “first-class presentations”, with “Mwindo Candy Shop” and “Mwindo on Broadway” two recent successful events – and meetings and fundraisers at the Page Bar, a Tremé establishment that “has become a center of the gay black community”.

Smith is nostalgic for the early ’80s, the “Golden Age of Gay Carnival in New Orleans”, when the krewes “were at their best and restaurants and bars brimmed with colorful characters, love, and drama.” In the book’s last chapter, he documents the establishments and social scenes that comprised “gay café society”, from Dixie’s Bar of Music, which opened in 1949, through the ’70s and ’80s. During this era, gay Carnival “not only filled the stages during the Mardi Gras season but spilled over into the rest of the year, creating a vibrant social scene.” One of the most popular establishments was Marti’s Restaurant, where “the morose figure” of Tennessee Williams could be found “in his usual corner sipping a bourbon cocktail.”

The author is, however, ambivalent about the transformations in gay life and culture that have occurred since the “Golden Age”. Jewel’s Tavern was “the center of a culture shift in New Orleans from the old-school flamboyance of the queen to the new hypermasculinity” of the so-called gay clone, an evolution that occurred in other cities, particularly in New York and San Francisco. In his Afterword, Smith riffs on Clio, the Muse of History, whose “spotlight” mainly illuminates only a small portion of complex and hidden histories but who sometimes “adjusts her beam” to focus on what has been hidden. Now, the Muse “has been unveiled and her secrets revealed”, such that gay culture is no longer underground. Smith welcomes the fact that “what had lain in the dark, beaten down and crushed, has come out in plain view.”

He observes that the “bold experiment” of sexual liberation that followed the 1969 Stonewall Rebellion came to an end with the arrival of AIDS. In New Orleans, the epidemic “decimated” the gay Carnival krewes. But the krewes also provided a kind of infrastructure that supported a community response to AIDS; they were the first local organizations to “push back against the deadly virus”. AIDS made gay men more visible than ever, and although the epidemic engendered intolerance and discrimination, visibility also contributed to greater societal acceptance, including legal rights.

Smith appreciates these changes but also argues that acceptance has come with costs: “The jagged edges and razor-sharp claws of gay culture have slowly been blunted, filed back by the great wheel of assimilation into the folds of a larger society.”

Drag, a key element of gay Carnival culture in its first decades, began to wane in popularity in the ’70s, a “trend that continues today with the hypermasculine and muscular gym devotees found across the country.” But now “gay Carnival is enjoying a rebirth, with a variety of themes and tableaux that echo the Golden Age of the 1980s. And drag is front and center in this renaissance” as “a real form of artistic expression.” Re-centering drag in gay culture is a good thing, says Smith, because “the revolution at the Stonewall Inn was started by the drag queens who threw the first bricks at the police and demanded equality.”

It’s unfortunate that Smith chose to end his Unveiling the Muse with a tendentious and ahistorical argument. He ignores the fact that the gay male world always has comprised a spectrum of gender identification; butch, masculine-identified gay men didn’t suddenly appear in the ’70s. There was a gay physical culture, with physique magazines and privately circulated erotica, in the ’50s, and even earlier. If anything, the emergence of the “clone” was a response to the hegemony of queen culture that many gay men found stifling and personally inauthentic. (Smith doesn’t even acknowledge that drag itself has become mainstream. If only gay people watched RuPaul’s Drag Race, it wouldn’t be the huge hit it is.) Moreover, the claim that drag queens started the revolution at Stonewall is erroneous. The resistance to the 1969 police raid on the Greenwich Village bar began with the patrons, who were not drag queens because, well, the Stonewall was not a drag bar. Queens were among the protestors outside the bar and in the streets, but they were part of a larger group that also included youths too young to enter the bar, street kids, and hippies.

Smith’s revisionism, which is becoming conventional wisdom among today’s “queers”, is regrettable. But it doesn’t detract much from his fascinating account of a culture that managed to celebrate itself even under the pall of oppression.