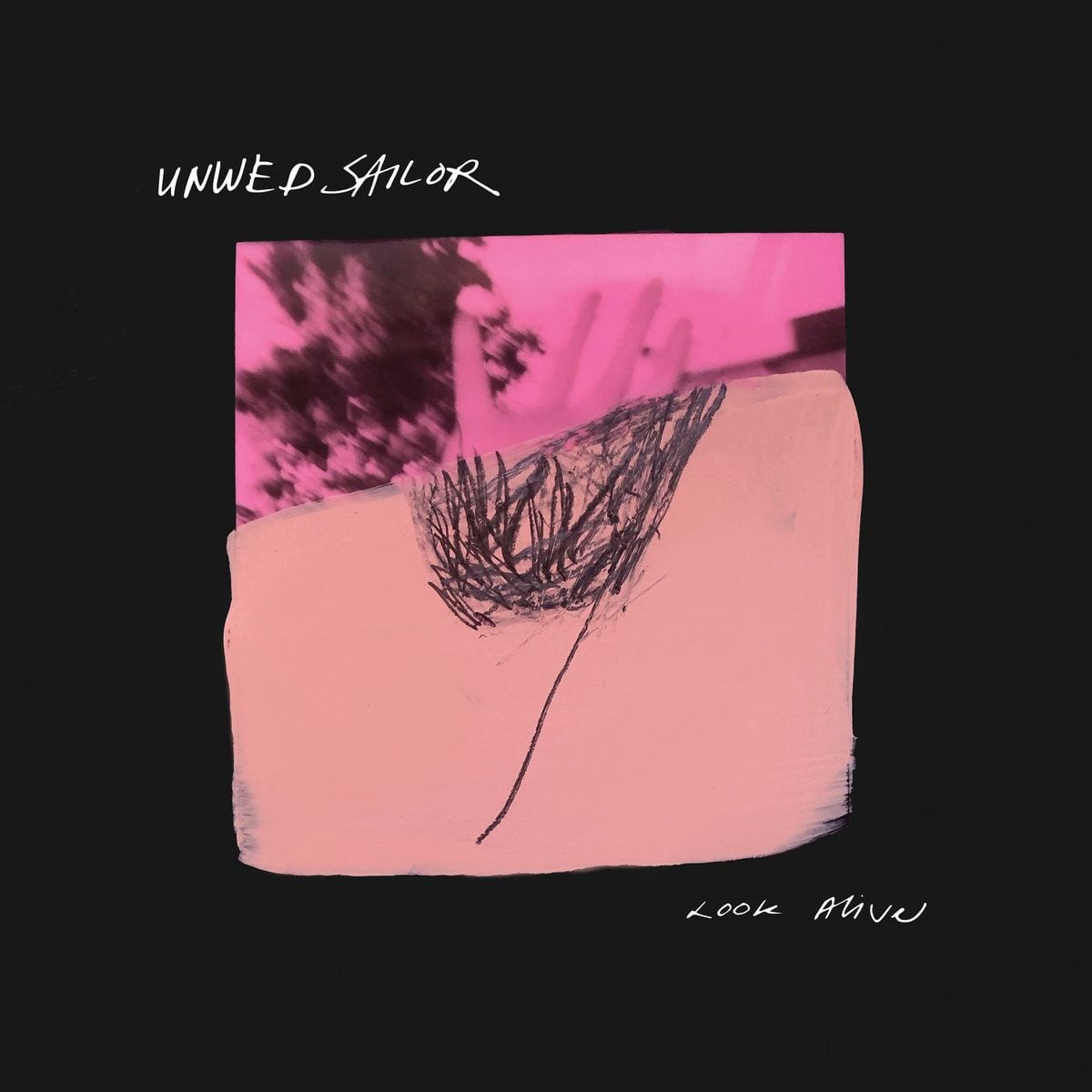 Look Alive, the latest release from Oklahoma instrumental rock outfit Unwed Sailor, finds the veteran band in fine form more than 20 years into their career. It’s part of a career renaissance that the outfit, led by Johnathon Ford, is undergoing at the moment. In 2019, the group released Heavy Age, their first full-length album in a decade and one that received wide critical acclaim.

Ford, who currently lives in Tulsa, Oklahoma, said after that record’s release that he was already at work on a follow-up. The group released the track “Gone Jungle” in 2019 to provide a taste of what was to come. Remixed and appearing in a slightly different form on Look Alive, “Gone Jungle” was indeed just a small bite of the sonic progress Unwed Sailor has made with the new album.

The opening “Glaring” recalls the propulsive power of acts such as Can and Neu but with Ford’s melodic sensibilities carrying the music somewhere else. Sure, there are glimpses of New Order, Talk Talk, and even the Cure, but David Swatzell’s tasteful, textural guitars and Matthew Putnam’s metronomic and sweeping drumming carry the piece and the others into a territory that is Unwed Sailor’s alone: vibrant, forward-thinking and awe-inspiring. These compositions suggest that Unwed Sailor may be approaching their finest hour yet. Other pieces, such as the cinematic, space-age exploration “Look Alive”, and the hard-hitting “Retrograde” stand as some of the best pieces in the trio’s considerable discography.

The band had planned on spending a portion of 2020 on the road in support of the LP, though those plans were quickly rendered impossible by COVID-19. Ford says that he found his time in quarantine useful: he played records, spent time with his cats, and wrote music for yet another chapter in the Unwed Sailor saga. What’s evident throughout a half-hour phone conversation is that Ford is eager to see where Unwed Sailor goes next and what untold adventures unfold.

You had live dates on the books for this summer. What does that look like now?

No one knows exactly what’s going on, so we just talk every two weeks to re-evaluate what we’re doing. We had shows booked in the early summer, and we had to cancel those. We had a West Coast tour and didn’t go forward with it. So at this point, we’re booking for the fall. No one knows what’s going to happen, but we’re trying to stay productive and move forward the best we can.

I think everyone’s a bit desperate at this point. I really feel for the venues. I hope that they survive this. I think some are booking bands in hopes that we can maneuver through this. But there’s no definitive plan. It’s all day-by-day. If the fall doesn’t work out, we’ll shoot for the spring of 2021. We’re definitely not on hiatus.

I recall you saying that this album was already being written by the time the previous record came out.

I’m pretty ahead of the game at this point. Look Alive is coming out and I’m already almost finished with the next one. I’m on a roll, and it feels awesome. The strange thing about this record is that I had some songs lined up ready to go, and then I started writing some other basslines. They had this more upbeat, almost bouncy, slightly punk feel to them. I thought, “This is weird that this is being delivered to me in this bundle.”

I started shaping those songs, and they all fit together in this thematic way. The album really just appeared. They had a lot of life to them.

What happened to the material that you were working on at the start?

Some of it wound up on Look Alive. Some of it will be on the next record. The upbeat, dancey feel was what I was after. The other stuff didn’t fit that. A lot of this isn’t up to me. These songs just kind of happen. They say, “We want to be on this record”, or, “We’re gonna be on this [other] record.” [laughs] You’ve got to go with it.

Do the majority of the songs start with you?

With Look Alive, the majority of songs started on bass. Then I went into the studio with Matt Putnam to put down drums and bass. There are a lot of songs with multiple bass parts. I dove into that with this record. I’m hooked. I feel like with every record from here out, I’m going to do as many bass parts as possible. It’s kind of a nightmare to mix that, but it’s kind of fun to track it. Much of this record was written in the studio as we were recording. We put “Gone Jungle” on the record, which was the single that we released during the Heavy Age album cycle. The majority of that song was written in the studio as well. So, after that album came out, we played it on tour, honed it a little more, and I felt like I could do more justice. We included it on Look Alive with more instrumentation and remixed it. But pretty much everything else was written in the studio.

Yeah, I loved that you put out “Gone Jungle” right after the album. How many things have you done as one-off singles or EPs?

There’s the “Magic Hedge” 7″ that came out in the early 2000s and was released on Tricycle-Evolutif, a Swiss label. It’s out of print. We did a split single with Toboggan for Gentleman Records, another Swiss label, around that time. We did a version of “Firecracker” called “Firecracker 2001.” We did a version of “Shadows” for the film For Jonathan , and that appeared on a compilation, and we re-released that the White Ox album. We did the soundtrack for the move Stateless with Early Day Miners in the early 2000s. We did a version of “Sister” for a Sufjan Stevens covers album. That’s probably the most obscure one. There are some EPs out there. Last night, I was trying to count all of our releases, and what I should consider EPs, what should be albums, what should be singles. We have more than I thought. It’s great to see how much we’ve accomplished over the years.

It’s always a journey. It’s like a little movie. What I’ve found is that I usually don’t have to think about it too hard. As it’s being recorded and taking on its full shape, I’ll sit down and I’ll plan it out. I usually do it pretty quickly. With Heavy Age,, I sequenced it by using certain keys. With Look Alive, it was more about the energy of the songs and how they moved.

I love that the album closes with “Haze”. It’s the perfect way to move out of the album.

It’s the first Unwed Sailor song where I played every instrument. It was a big accomplishment for me, mentally. Unwed Sailor has always been a part of me, and I’ve collaborated with people who have understood my vision and get inside it as well. This was the first time I dove in and did it by myself. It’s 100 percent my mind and who I am. I think that fits into the theme of Look Alive, which is just believing in yourself and becoming fully who you are. Fully embracing what you love and allowing it to come through.

I’d written the bassline, which is so simple, three notes. I feel like it’s a new direction in the sense of me playing all the instruments. It feels like a closer, but it also feels like a new beginning.

Has there ever been any temptation to put aside the Unwed Sailor moniker?

There was a short time, with the Take A Minute EP, where I thought, “OK, I’m going to make this a different entity.” I felt at the time that maybe it didn’t fit musically with Unwed Sailor. But the same thing happened with The White Ox. I thought, “What is this?” I’ve realized that this music comes out of me, so it’s Unwed Sailor. Every record doesn’t have to sound the same. We feel differently on different days. Our handwriting might change from one day to another. Our food tastes might change. Our musical output can be the same way.

So you view it as very much your band? I think Mark E. Smith said that The Fall was him and your grandmother on banjo if she showed up.

[laughs] Well, if someone’s grandmother wanted to play killer banjo in Unwed Sailor, I’d be open to that. I’m really picky about who I play music with. Even though things change, I always feel like there’s an underlying thread that holds it together. There’s something that connects the records, even when they’re completely different. I look for people who can understand that thread and can be part of that. I’ve been so fortunate to find people who get that. Nick Tse, who collaborated with me on The Marionette & The Music Box; Matt Putman, Dave Swatzell, who plays guitar in the band now, their contributions have been crucial. They’ve expanded the universe of Unwed Sailor. You can imagine that that’s really hard to find. It leads me to believe that some things are just meant to be. How many times in life can you meet someone you can mesh sound with perfectly? It’s magical.

You’ve had this incredible longevity with this band.

You wouldn’t know it from how many times I’ve moved around the country and how restless I can seem at times, but I like stability. If I find a food that I like I’ll eat that food five times a week. I’m very committed and very loyal to something if I love it. That we’ve been able to exist for over 20 years means a lot to me. I feel like it’s a reflection of my personality, too, that reflection of commitment and loyalty and the decision to keep moving forward no matter what. It’s about finding something that you love and a voice. It’s about continuing even if you think no one’s listening.

I’m attracted to bands that have had longevity. Of course, there are bands like the Sex Pistols that change your life and have only released one proper album. To me, longevity is releasing four albums. If you can release four albums, you’ve made it. Then there’s a band like the Fall: so many different records, so many different worlds, and different members. Mark Smith just kept going. I’d obsess over that band for a year at a time: Reading all the credits on the albums, about all the different people, and finding out what was going on in Smith’s life at that point. The longevity that a band like that had is fascinating to me.

I love the function of the bass within Unwed Sailor. You play in a way that’s not unlike Simon Gallup of the Cure in the bass doesn’t always function in a traditional way within the music.

I want to offer something distinct, musically. I don’t want to be the same old same old bass player. I don’t want to be, “Oh, there’s instrumental band 456.” I’m thankful that I’m a player that has a distinct feel and sound. When I’m playing, I’m thinking, “Oh, there’s Peter Hook. There’s Tortoise.” Those are important influences, but I feel like those influences have morphed, and I now have something that’s really me. I don’t know how I accomplished that.