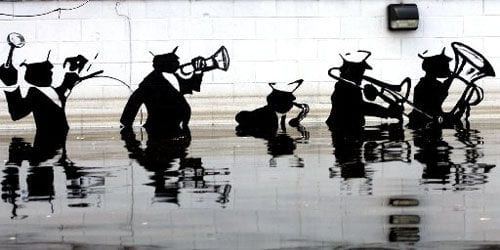 City of Dreams gathers together some joyful and bittersweet music and anyone unfamiliar with Professor Longhair, Eddie Bo, Johnny Adams, James Booker, Champion Jack Dupree, Irma Thomas, Ruth Brown, and Tuts Washington should take a week off to remedy that situation immediately. Clarence Gatemouth Brown makes an appearance too, one foot in Texas and one in Louisiana, as always. The Golden Eagles and The Wild Magnolias show a vivid strand of New Orleans’ unique culture and there are also fine younger generation artists here such as Rebirth Brass Band, New Orleans Nightcrawlers, David Torkanowsky, and Davell Crawford.

The Nightcrawlers are arguably the most proficient musicians on the brass band scene, but like the Dirty Dozen Brass Band before them, Rebirth is a must-see band, magnificent when the real line-up actually hits the stage and with enough raw power and swing to drive an audience to do things in public they wouldn’t do in their bedrooms with the lights out! Elsewhere, it’s nice to hear forgotten stars like Eddie Bo and Chuck Carbo again. Carbo had hits in the 1950s with the Spiders, worked in a lumber yard when gigs dried up, and then came back to record again in the early 1990s with Drawers Trouble.

Rounder claim that City of Dreams is the definite set from their roster of New Orleans artists, but there is no explaining the absence of Fats Domino (who has recorded for the label). It’s also doubly odd that the Mardi Gras song “Carnival Time”, by Al “Carnival Time” Johnson appears on the disc entitled “Big Easy Blues”; but its winter mirror-image, Charles Brown’s “Merry Christmas Baby”, doesn’t feature anywhere. It is perverse to give Davell Crawford three cuts to Champion Jack Dupree’s one, and to include a piece that Solomon Burke recorded in nearby Slidell is more than a stretch. Sorry, no one would include Burke on a list of New Orleans artists. The title is also almost too close for comfort to Randy Newman’s Land of Dreams album which included a couple of elegies to the Crescent City part of his childhood.

Luckily, none of these gripes matter much. This music is a slippery customer, sliding easily between church, barroom, and bedroom with little use for foolish notions of purity or accuracy. The city opts for celebration and ritual over perfection. Indeed, most literary and cinematic attempts to capture its essence merely prove the folly of putting the word “definitive” and the words “New Orleans” in the same sentence. New Orleans resists the spreading blueprint of Identiplace, USA because its own tenacious and complex African, Caribbean, and European heritage propagates unique architecture, cuisine, and music.

And make no mistake, the food and sounds of the Crescent City are as valuable as the buildings in the French Quarter and Garden District. Unfortunately, while a road sign welcomes drivers to “America’s Most Interesting City”, the lack of a coherent infrastructure to reward creativity means guys of the caliber of Louis Prima, Danny Barker, and Wynton Marsalis must leave to prosper. It’s no secret, either, that long before Hurricane Katrina’s arrival, local government cheerfully agreed to sell off or demolish landmarks such as the store where Louis Armstrong bought his first trumpet.

Of course, few people leave the Crescent City completely behind. The Marsalis family remains one of the bedrocks of musical life in New Orleans. After backing Billie Holiday and others, Danny Barker returned (with wife, the phenomenal Blue Lu) and his subsequent involvement with the Fairview Baptist Church mentored Wynton & his brother Branford, Leroy Jones, Dr. Michael White, Anthony “Tuba Fats” Lacen, and Kirk Joseph. A new generation of torch-carriers. Amen to that, and to the recent efforts of James Andrews.

Anyway, of the four discs in question, “Funky New Orleans” is the least satisfying. It contains no really indispensable tracks and certainly nothing approaching the absolute genius of The Meters or Lee Dorsey. Despite his unquenchable gigging stamina, I’ve never quite “got” Walter “Wolfman” Washington, and “Ain’t No Yachts in the Ghetto” by Theryl Houseman de’Clouet seems wooden and wordy. It’s probably heresy to admit all that, but having spent 13 fascinating years in New Orleans, parroting boosterism doesn’t feel right. To hear some people tell it, not even the most minor local artist could ever release a poor record and everyone deserved an annual award. Of course, there has been far worse and far more dangerous subterfuge.

Bush stood in Jackson Square and read a speech writer’s lies. He read that no one could have envisaged that the levees would break, yet many scientific reports of the last 25 years gave that precise warning. Then some people insultingly suggested the city might come back “better”, a thinly disguised code for “whiter” that provoked Mayor Ray Nagin’s infamous “Chocolate City” comment. For all his failings, at least Nagin was able to make a P-Funk reference! After all the nightmares, the willful neglect, the incompetence, the ignorance and the hypocrisy, eventually the spirit of its ordinary people will lift New Orleans again, and it’s funkiness will play a part. Earl King had it right when he sang “There ain’t no city like New Orleans!”

There are some sad tunes in this collection. Both David Torkanowsky’s “Spring Can Really Hang You Up the Most” and Tuts Washington’s “Do You Know What It Means to Miss New Orleans”, all the more poignant in the aftermath of disaster, deftly avoid mawkishness. Mainly though, things are up-tempo and mostly groovy. It would have been cool to see John Mooney and Snooks Eaglin featured here, but their best work isn’t on Rounder. Earl King, Danny and Blue Lu Barker, Lee Dorsey, Ernie K-Doe, John Boutte, The Iguanas and countless other artists aren’t here either, because they are on other labels. That’s not a criticism of Rounder, just a call to action for record buyers! Since we’re on the subject, while the brief of this set is clear, any package that claims to explore every musical style in the city had better nod to Quintron & Pussycat, Potpie, Glyn Styler, and the exiled John Sinclair.

Decades ago, William S. Burroughs called New Orleans a decaying museum in the swamps. Certainly, the city can appear more stubbornly unhurried than the Zulu parade, happier looking back than ahead, and absolute heaven for cynics. Schoolchildren wander home blowing shiny horns. Ancient trees sprawl magnificently across yards and sidewalks with their roots pushing into the potholed streets. Families cook-out on streetcar tracks on Mardi Gras day, far from the tourists in the Quarter showing their breasts for plastic beads. The encyclopedic Louisiana Music Factory store is hassled by City Hall for having free shows with free beer. Signs urge patrons to buy “Bake Chicken” and schoolchildren to “Stay Focus”. A vicious drug trade fuels an endless plague of killing. The good times roll at the Saturn bar, the Columns Hotel, Rock n Bowl, Irene’s, Angelo Brocado’s, the Spellcaster lounge, Napoleon House, Bozo’s, Commander’s Palace, Vaughan’s and elsewhere. Young women, some with skin stretched tight as boudin, get their cocktail of HIV medicine from Charity Hospital. Mardi Gras Indian tribes awaken and illuminate blighted neighborhoods. WTUL 91.5 FM plays new stuff for those who’d escape the ever-diminishing circles of local roots culture. Strange and wonderful sounds leak from the cottage-industries at McKeown’s Books & Difficult Music, Anxious Sound, and Backporch Revolution. The air suffocates. Lovers hold hands in cemeteries. Oysters get baked. Statues of Saint Joseph are buried upside down in gardens to help sell houses. Rain washes the streets. Kids play at NOSA. People go to work and try to thrive. Gumbo bubbles. Roads follow the river, ghosts drift up Esplanade Avenue, or meet up at St Claude and Dumaine, and float on and on down Claiborne Avenue….

Or was that all a dream?