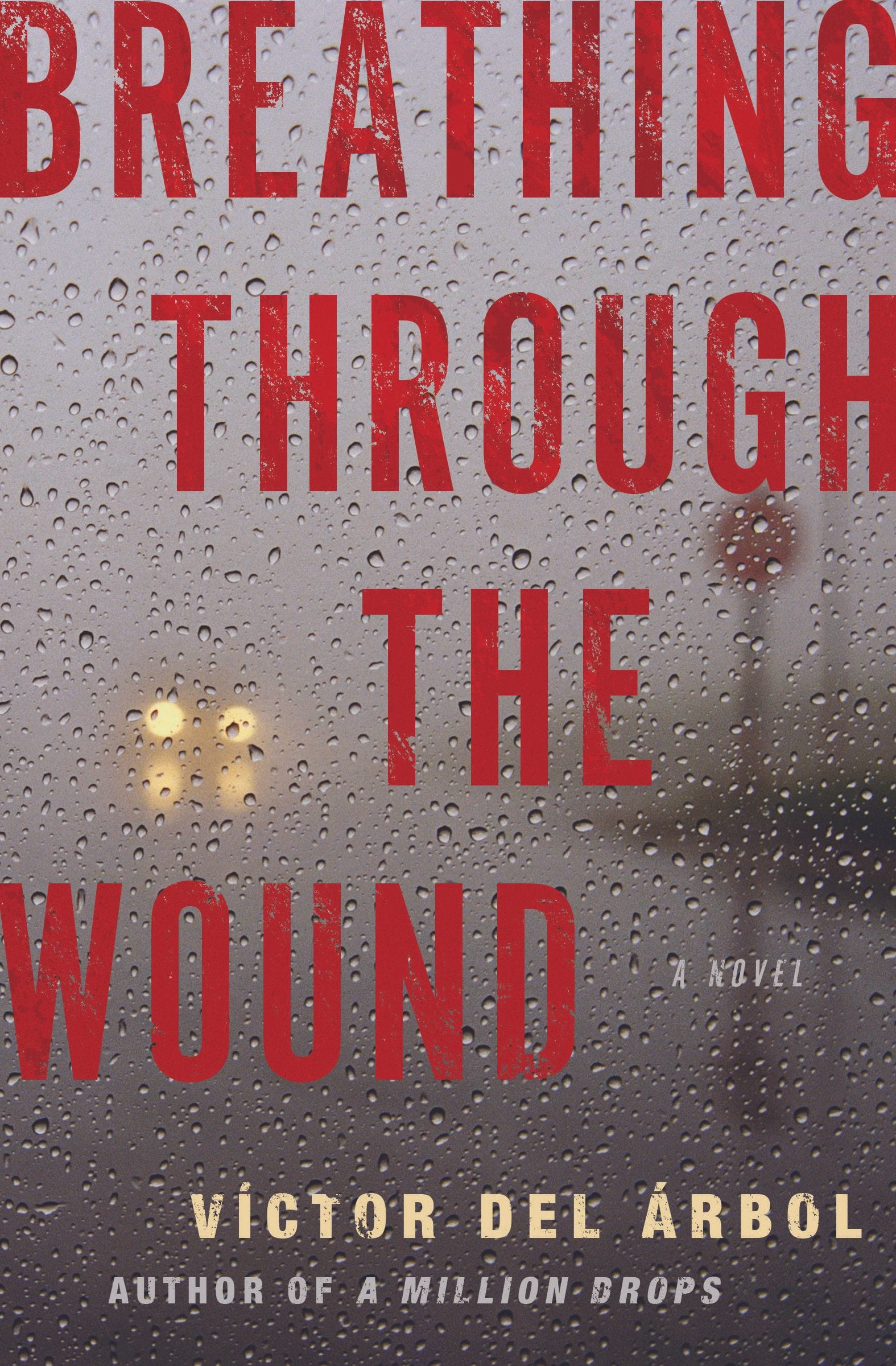 Breathing Through the Wound
Víctor Del Árbol
Other

With the recent success of A Million Drops (2018), English readers are learning that Spanish author Víctor Del Árbol is one of the most captivating crime-thriller voices in current literature. Such is the case with Del Árbol’s third novel, Breathing Through the Wound—first published as Respirar por la herida in 2013.

In this novel, translated by Lisa Dillman, Del Árbol presents a depiction of high crime as compelling as filmmaker Fabián Bielinksy, undergirded by a philosophy of criminality as complex as Dostoyevsky‘s. Propelled by characters and situations so vivid and intricate, readers won’t realize they’re reading a who-done-it — until it’s too late.

The action starts when has-been Madrilenian portraitist Eduardo Quintana gets an assignment uncanny enough to snap him out of his grief-induced stupor. The famed, and floridly wealthy violinist, Gloria Tagger has commissioned him to paint her son’s killer, shady financier Arthur Fernández, recently released from prison, as the Court has deemed the incident a vehicular homicide.

Eduardo’s loyal art-dealer Olga is skittish about Gloria’s proposition. “She (Gloria) was asking Eduardo to lock a man inside a cell made of brushstrokes, a man who would surely struggle to rebel against the painter and jump out of the canvas” (87). One can hear the Dorian Grey element here, as well as the Faustian bargain washed-up Eduardo is making. But not only is Gloria strikingly beautiful, her situation and status as a grieving parent is too similar to Eduardo’s own for him to resist.

[Hand In Water] Image by Pete Linforth from Pixabay

Fourteen years prior, Eduardo’s beloved wife and daughter were killed by an unknown assailant in a hit-and-run. Since, Eduardo has subsisted on alcohol, cigarettes, and psychotropics dolled out by his vapid psychiatrist, Martina. Galvanized by Gloria’s commission, Eduardo sets out to paint Arthur and capture the man’s essence. In doing so, Eduardo is unwittingly sucked into a subterranean world of intrigue and violent betrayal.

This Stygian world is populated by wounded artists—musicians, painters, poets— and collectors turned criminals; naturally, the implicating commodity is not illicit drugs, but fine art. Boléros score the torture scenes, and the bludgeoning weapons used are thick collections of poems by Rimbaud.

While preparing their solar plexuses for gut punches to come, readers should pack some patience, because the first few chapters of the thriller read more like Haruki Murakami than Stieg Larsson, though it’s clearly the latter’s territory we’re treading on. The narrative begins as a slow-burning fire that crackles with each new character being introduced.

Let’s take Arthur, whom we’re warned “is not an easy man to understand” (54). Árbol uses complexity, not likability, to endear readers to his characters. Arthur, the fiery-haired pied-noir (Frenchman born in Algeria) with his bon vivant lifestyle, is set as the antagonist at the outset. But through third person omniscient narration executed with sprezzatura by Del Árbor, the reader finds themselves rooting for Arthur and relieved to have a break from sad-sack Eduardo.

We learn Arthur was a promising young poet who had to rappel down from the ivory tower of academia because of a scandal in which unresolved trauma from his childhood was used against him. Though since he’s become a cutthroat speculator in high finance, he too is a parent bereft of his child: his daughter Aroha’s disappeared and his wife Andrea, consumed by motherly grief, has descended into catatonia.

The plot takes another turn when Arthur puts the horrifically scarred Private Detective Guzmán on the case to find his daughter no matter what the cost. As a former member in the National Intelligence Directorate (DINA)—a euphemism for Pinochet’s death squads— Guzmán is more than amenable to this unscrupulous arrangement which sends him sleuthing through Madrid’s underworld.

Out of breath yet? There’s an Ariadne’s thread in this labyrinth, and its Del Árbol’s intellect, connecting each circuitous turn into a monstrous whole; however, the string he’s leading readers with is, in fact, a lit fuse.

For example, Guzmán is a nightmarish Columbo, blundering down rabbit holes so divergent as to seem aimless. But these subplots elucidate Del Árbol’s themes while leading Guzmán to the culprits. Not only does Guzmán serve as a source of uncovering and suspense, but he provides Del Árbol a comfortable host in which to inhabit his own novel. A former Madrilenian police officer, Del Árbol is clearly most comfortable writing as Guzmán. While this leads to some self-indulgent and overly noirish excesses (hence the book’s nearly 700-page length), it also leads to unforgettable, if dispassionate, insights into the human condition.

“Whoever’s up there writing the screenplay of our lives has a very twisted sense of humor,” Guzmán remarks in the face of one of the many bizarre twists he uncovers (422). This is Del Árbol winking at us as he comments on his own misanthropy.

Not all of Del Árbol’s characters are as successful, however. Martina, Eduardo’s psychiatrist, is particularly wan. For example, her house is filled with frames with the fake photos still in them (292). Are people ever this hollow or only when a novelist needs them to be?

The number of apparently obsequious women is disconcerting at times. For instance, a key plot twist hinges on an unbelievably solicitous African American mistress. Though a reader may roll their eyes at how loyal several of the characters appear to be in the first half of the novel, for the most part, it is part of Del Árbol’s masterplan. Ibrahim, Arthur’s enigmatic Algerian cellmate, part Sufi mystic, part assassin, adopts a servile posture as Arthur’s henchman for a portion of the story. The svelte art-dealer Olga puts up with Eduardo’s constant self-medicating and ingratitude for reasons that aren’t clear until much later.

Photo by John Noonan on Unsplash

“There are always currents flowing beneath the surface,” Del Árbol tells us. “Currents that flow like the truth but are never stated, currents comprised solely of sidelong glances, half-gestures, unspoken understandings” (79). Though this quote is describing intrigue within prisons, it is an apt description of Del Árbol’s outside world, too, as each character’s motivations are concealed blades.

Del Árbol uses a lot of near doubling, creating similar situations and characters. This leads a reader to make comparisons early while Del Árbol masterfully withholds key information that later proves early comparisons false. Thus, Del Árbol uses a reader’s jumps to conclusions to propel the novel’s suspense. Which side character plays doppelganger or foil to the main characters? Which character, if any, has the fortitude to sidestep the fruitless cycle of revenge?

It is not clear until the final 50 pages where each character fits within Del Arbol’s Bruegelian portrait of human nature. But when the painting’s complete, one can step back and appreciate Del Arbol’s thesis on what motivates the highest crimes: our attempts to return to an essential essence we feel separated from by our misguided passions or by the hand of fate—a hand whose cruelty is matched, if not exceeded, by our own.

As dizzying as Del Árbol’s philosophy of crime may appear, the layering of motifs in the novel is vertiginous. Numerous characters are either unrepentant pederasts or their wounded victims. There’s the motif of once beautiful women made marginal by their husbands or lovers, and these women’s attempts to reclaim autonomy by absconding with more ardent suitors. Children are trampled or cast aside by their parents’ conquests. Evil from patriarchs of the past awaken in the middle generation, and the youth suffer. Priceless art—a Stradivarius violin, a portrait, a coin, reels of the first films ever made—are all pawns in the sadistic fantasies of former artists, fathers, and lovers alike.

Each page in Breathing Through the Wound is a leaf obscuring a clue, and because the leaves’ markings are so ornate, a reader forgets that the clues they have uncovered are bones of murder victims, and footprints made in blood. When the smoke of explosive revelations has cleared, the most worldly-wise of readers will feel that they’ve lost some of their innocence, yet also gained a hard-earned perspective on humanity. From a crime novel, that’s a breath of fresh air.