It’s not likely that a film like Sofia Coppola’s gorgeous, shimmering and suffocating orange glow debut The Virgin Suicides would be made today. The air and atmosphere is thick with decay and doom. It’s not a matter of what could be made but rather a question of what should, what would, and how the implications of a story of suffering teenaged girls might be interpreted in today’s emotional climate. Jeffrey Eugenides’ first novel, 1993’s The Virgin Suicides (Farrar, Straus and Giroux) was more a tribute to the worship and mystery of teen femininity so provocative in such ’70s pop songs, such as Todd Rundgren’s “A Dream Goes on Forever” and The Hollies’ “The Air That I Breathe”, which became the only way the five cloistered and doomed Lisbon sisters of this story could communicate with the outside world. (Those who remember the novel’s scene where the boys communicate with the girls via phone and a drop of the record player needle after the Lisbon matriarch ordered all their records destroyed will be pleased to see how it plays out here.)

Coppola’s 1999 film was released in a climate where pedestals were still in use, where actor James Woods (as the Lisbon patriarch) was better known for his film performances rather than his severely politically conservative twitter ramblings, and where the fate of five teen sisters looking for a way out of their confines proves hopeless. Why is this sad story so beautiful and even more relevant today than nearly 20 years ago? Consider Kathleen Turner, already out of the sexually charged femme fatale roles in which she established her reputation and status in the early ’80s. As the matriarch of this suffocated family, she stands at a distance, with her husband, and the girls play out their fates, one way or another, one after the other. Hers is a solid, determined, different type of female character in this role. 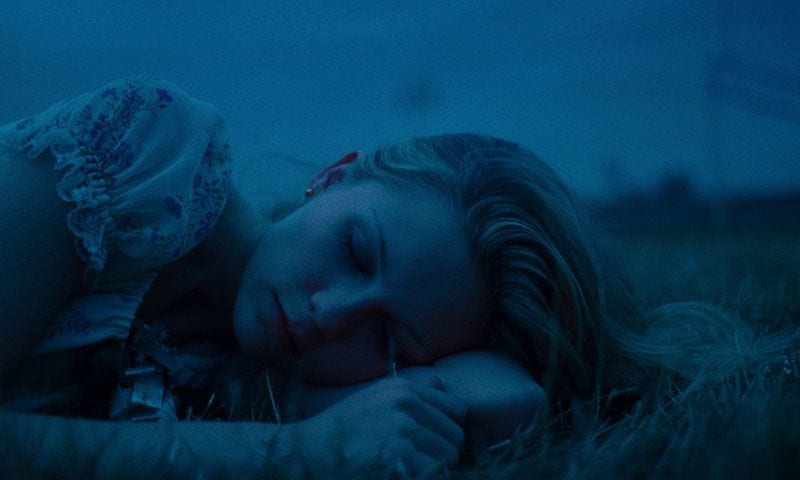 This new Criterion Collection Blu-ray release of The Virgin Suicides comes at a time and in a climate when a story like this may still not be appreciated or given the respect it deserves. In her essay that accompanies this release, writer Megan Abbott puts it this way:

In the hazy, dreamy, poisonous world of The Virgin Suicides, language is limiting, even imprisoning, while greater, more profound truths lie beyond narration, in the visual, in the experiential, the imaginative.

This seems to be the essence of Coppola’s vision here. The four boys so enamored of these Lisbon girls take the souvenirs they find of them as if they’re religious relics. Actor Giovanni Ribisi offers a regular stream of voice-over narration. While something like this would feel intrusive and annoying in other instances, in The Virgin Suicides it’s painfully appropriate. With the sweeping ’70s-era appropriate string-soaked score from the group Air, Coppola gives us gauzy, hazy flashbacks. The fantasies are real and displayed, but Coppola is equally concerned with the harsh realities. Notice that the décor and very atmosphere of all houses but the Lisbon interior seem brighter and less stifling. They’ve still got the ’70s-era garish colors and patterns, but they’re comforted by the security of their presumptuousness. 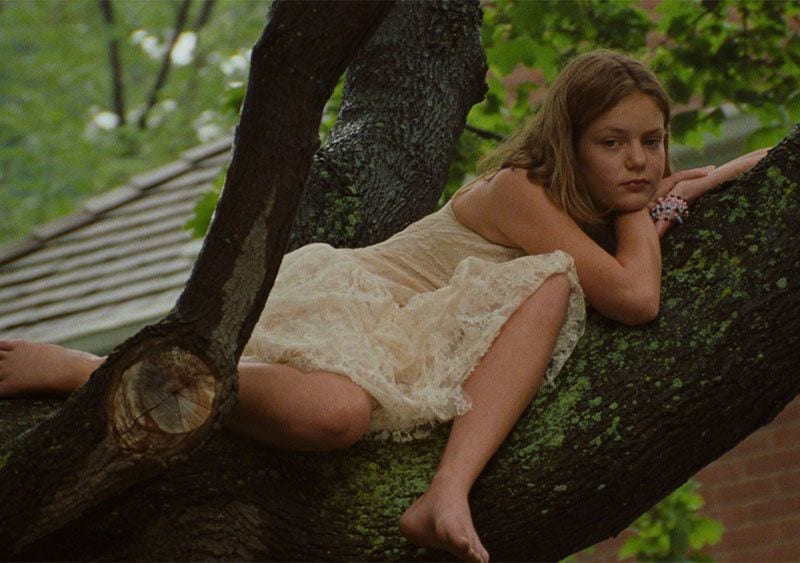 The families of this neighborhood are complacent and secure in the likelihood that their children will never choose suicide as a way to leave this world, but the boys choose different pays. They either resort to what would now be known as “mansplaining”, or they fall into the traps of psychological diagnoses. In her essay, Abbott correctly notes that while Eugenides’ novel allowed the boys to tell the story, Coppola’s film shifted ownership to the girls. She still has the voice-over narration, and the boys are almost junior investigators determined to unlock the mysteries of these doomed princesses in the tower, but Coppola allows the girls to live in her film. They laugh, paint their toenails and push the hair from their eyes. They walk together as one foursome, boldly and unapologetically, back into the school after the death of Cecilia. Lux, played with a dangerously empowered sexiness by Kirsten Dunst, takes a boy named Trip (Josh Hartnett) for a stolen make-out session in his car. They may have to meet the needs of the film’s title by the time its final credits roll, but they won’t go down without a fight.

There’s comedy in the way the film plays with the devastating effects that Lux had on Trip, but it’s not played off in a smarmy, derisive manner. The girls are walking dreams, waking, aching desires unfulfilled. When unions are reached, the viewer is more fulfilled than the reader. Where in the novel we learn secondhand of the assignation between Trip and Lux, Coppola allows us to be with this couple on the empty football field, to see Trip leave Lux, (still sleeping) and walk away into the distance. Abbott reflects:

We watch Lux in a cab… We watch her arrive home and face her hysterical mother… We experience… that knife-sharp coming-of-age moment when you realize love isn’t forever and people will disappoint you.

It’s in this context that Coppola’s vision for this story is as clearly felt in the crisp, beautiful colors of this blue-ray 4k digital resolution as it was in the original theatrical release. Eugenides seemed to want us to think that Lux ruined Trip for any other girls. She so devoured him that he ended up in rehab and noted in an interview to the camera as an older man (played by Michael Pare), that “…most people will never taste that kind of love. At least I tasted it once.” 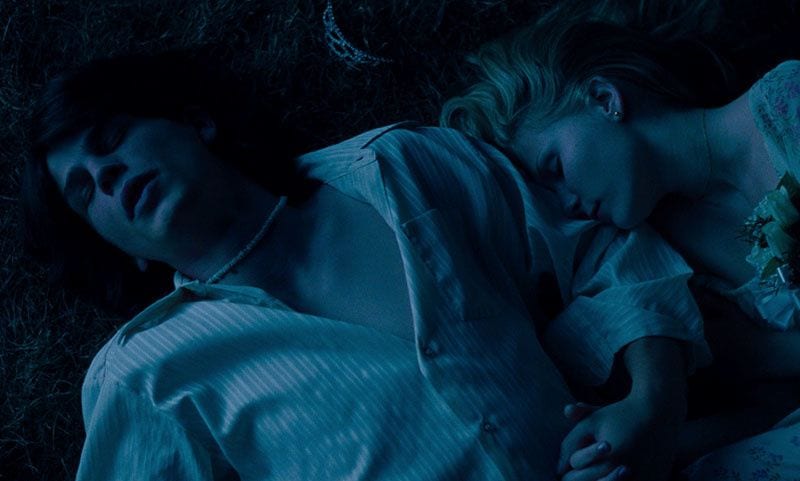 There’s a lot that can be read into the idea that the five Lisbon girls as created by Eugenides in his book were simply means by which he carried out a myth of the suffering female goddess. Were they merely pawns meant to represent desires unfulfilled? Was Coppola the only director who could have convincingly and sympathetically taken the same story and allowed the girls to assume ownership of their own fates? The viewer knows (as the reader should have understood) how this story will conclude. The three surviving Lisbon girls, overflowing with excitement, prepare to go to the Prom with their sister Lux and bad boy Trip with three of his friends.

In essence, the triumph Coppola accomplished in her film debut is more than just overcoming questions of nepotism and shaking off the effects of her wooden performance as Mary Corleone in her father’s film, Godfather Part III (1990). The greatest accomplishment is her ability to shift the intended focus from the boys to the girls. As the film comes to its inevitably tragic conclusion and the voiceover narration reflects that the girls “hadn’t heard us calling, still do not hear us calling them out of those rooms, where they went to be alone for all time, and where we will never find the pieces to put them back together.” With the words alone to tell the tale, the reader can only conclude that this story was meant for the boys to tell, that the sacrifice these girls made was an essential step for the boys to become stronger. In the closing moments of her film, Coppola makes it clear that the boys were only supporting players in this story of the short, tragic, meaningful lives of the Lisbon girls and their decaying surroundings.

It’s peculiar to say that a film featuring the eventual deaths of five girls is the ultimate coming-of-age story, but that’s probably the best way to explain the lasting effects of the film then and now. The reader might think it was the boys who reached some sort of understanding by the film’s end, but Coppola makes it clear that it was the girls who took the ultimate, definitive ownership of their conditions. The third act of The Virgin Suicides plays out against the backdrop of the Lisbon girls under house detention, wandering around in their nighties, battling to save a dying tree by putting their bodies before the chainsaws. Lux plays out her untapped sexual energy through random assignations with anonymous boys, never the boys telling this story, just warm bodies passing through for the night.

Again, no matter how strong the contemporary viewer might find themselves drifting from feature to feature on streaming services or via their phones, The Virgin Suicides should come with a trigger warning. It’s devastating in its purity, its innocent evocation of longing, especially in the extended scene where the boys communicate with the girls through a series of songs: “Hello, It’s Me” (Todd Rundgren), “Alone Again, Naturally” (Gilbert O’Sullivan), “Run to Me” (The Bee Gees), and “So Far Away” (Carole King.) It’s the ’70s equivalent of Instagram bursts of longing through social networks.

The final kicker fantasy doesn’t fool anybody. There’s no last minute reprieve. The four boys don’t manage to rescue the Lisbon girls from their eternal imprisonment and suppression. There’s only darkness. Coppola’s The Virgin Suicides is as high-minded and literary as its source material. It might not have a place in this world of instant gratification, “likes,” and re-tweets, but in its own way, Coppola made the brutal absolutism of its final act the ultimate representation of female empowerment in a world where all other reasonable options seem impossible.