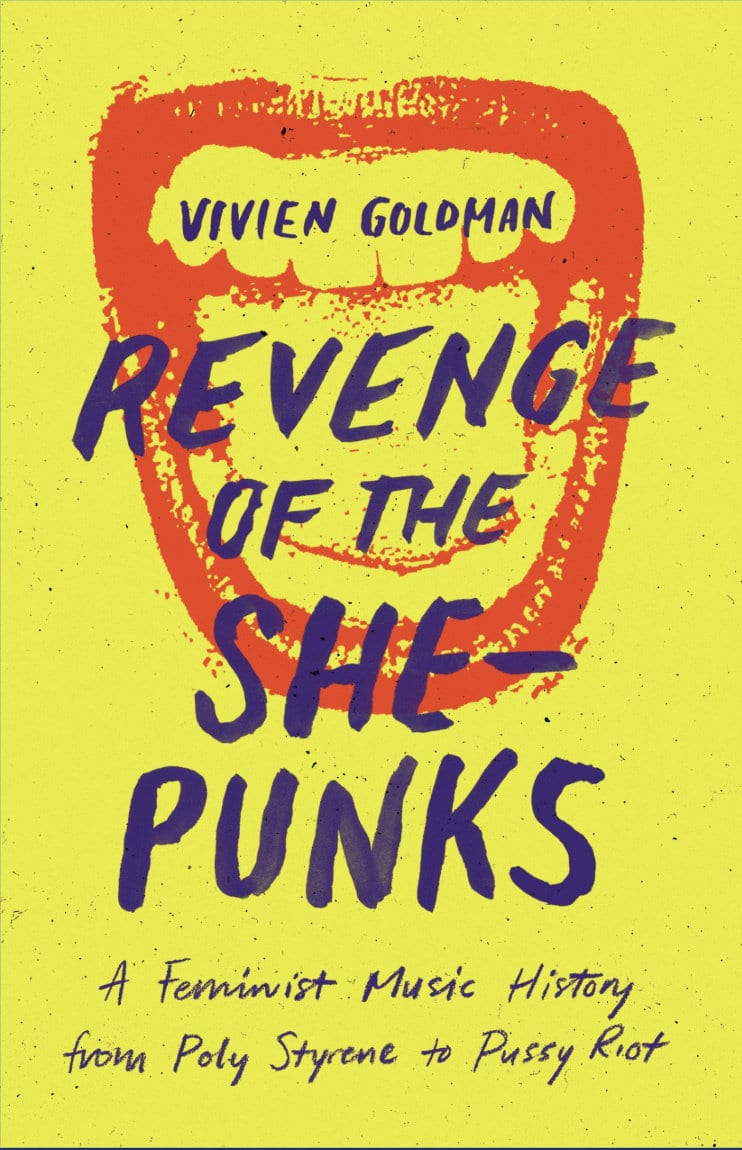 Revenge of the She-Punks
Vivien Goldman
University of Texas Press

The University of Texas Press has been quietly building one of the best music book catalogs around. Hanif Abdurraqib‘s book on A Tribe Called Quest, Go Ahead in the Rain, is being celebrated as one of the best books of the year. They’ve got a bunch of Texan and general country fare, plus they’re working on a series of “Why ___ Matters” books that already includes such diverse musicians as the Ramones, the Beach Boys, Karen Carpenter and Lahasa de Sela. Beyond those, I can personally recommend Jessica Hopper’s Night Moves, Alina Simone’s Madonnaland, and Adam Sobsey’s Chrissie Hynde—and my personal favorites should give a clear indication of how excited I am to review Vivien Goldman‘s Revenge of the She-Punks.

We are not going to talk about Goldman’s extensive bonafides as a musician, producer, ultimate scenester and cultural critic, because that is a useless way to evaluate a book on punk feminism. Suffice it to say she’s well qualified. A more punk feminist approach is just to read the book and then love it or hate it or possibly both. I just loved it. I loved it for many reasons.

The first excellent thing about Revenge of the She-Punks is that it is not written in chronological order. Nearly all music history books rely upon the linear passage of time as a unifying principle, and this is not only a lazy approach but perhaps worse, it often proves a detriment in the analysis of true common threads that connect one moment in music to another. It’s often closer to the truth that one band inspired another band just because all the kids in both bands lived in the same town, for example. Regional treatment is the common back-up to chronological treatment, but Goldman embarks on a wonderfully ambitious analysis based on subject matter. She divides the chapters into Girly Identity, Money, Love/Unlove, and Protest. I mean, has music ever been about anything but these four things? No, it really has not been about anything other than who we are, the price we pay, the solidarity we find, and the fights we pick. Or as Goldman says, “In the case of punky females, revenge means getting the same access as your male peers, to make your own music, look and sound how you want, and be able to draw enough people to ensure the continuation of the process. Sounds simple enough, talent permitting, but as this book shows, it’s different for girls” (7).

The chapter for each topic opens with a playlist. This is of course an art form unto itself, and Goldman’s mixes are exceptionally good. She has assembled the usual suspects among foremothers—Chrissie Hynde, Patti Smith, Joan Jett, Blondie, and so on. Where she has included these legendary and obvious candidates, she has generally not picked their most famous hit song. Furthermore, Goldman strays across the globe, rather than sticking to the United Kingdom and the United States. In this book you will find punk musicians from Japan, Columbia, India, France, Russia, Germany and more. Even the playlists are not arranged in chronological order. Blessedly, UT Press has provided Spotify playlists for each chapter.

The essays in each chapter then mainly roll through each song in a row, so having the audio handy while you read is an absolute must. A lot of these tracks will otherwise be hard to find. In discussing how each song represents for its musicians and how each musician represents for the chapter’s topic, Goldman offers a seamless mix of personal memoir, historical detail, direct interviews with the musicians, and her own academic analysis. The essays stand alone as highly insightful and independently valuable without giving the songs a listen first, but the experience of the book is still improved dramatically when you let the playlists spin. Overall, this well-blended type of nonfiction reminded me of the fast-paced, fun-packed style of Camille Paglia’s work in the early ’90s, except all of Goldman’s arguments seem very well grounded in reality and Goldman is much less judgmental.

Indeed, one of the best things about Revenge of the She-Punks is the total lack of spite Goldman exhibits throughout. It would be far too easy to do a tell-all book about the experiences of women in punk music: the sleazy rapists passing themselves off as promoters and managers, the drug-fueled nightmares of life in a semi-abandoned squat, not to mention the things women do everywhere for money and how living in a war-torn or fascist nation impacts one’s daily survival. Goldman takes an unflinching look at all of this, but she could have simply made a long list of dead girls and bad guys and called it a day. Instead, she hefts the virtues and the vices into one heap and concludes that some of it was necessary, some of it was fun, and some of it was evil. It’s a true and generous move that doesn’t gloss the reasons we she-punks still have to rage. After all, “our revenge is our complex survival” (8).

If you know nothing about women in music, punk is a perfect genre to start with because it really boils down the essential issues. If you know nothing about punk, Goldman offers just as solid a primer on the overall vibe as Legs McNeil and Gillian McCain’s Please Kill Me: The Uncensored Oral History of Punk (Grove Press, 1996), plus a much more sweeping historical view than that touchstone ever did. If you do know something about women in music, or punk music, or women in punk music, you’ll nevertheless find plenty of new ideas to dive deep on in Goldman’s seriously excellent treatise. Revenge of the She-Punks is not to be missed. I haven’t liked a feminist music book this much since Gillian G. Gaar’s 1992 book, She’s a Rebel: The History of Women in Rock and Roll (Seal Press).