In response to this crisis of another mouth, the strapping handsome blond peasant (Ivan Chuvelev) travels to the city in hopes of finding work, perhaps in the factory where his Bolshevik cousin (Chistyakov, the drunken brute in Mother) works. This time, the housewife (Baranovskaya again) is younger and harder, calmly announcing to the country bumpkin that he’d better go out and find work for himself, as nobody will feed him.

She seems to have little use for a bald rabble-rousing co-worker (Alexander Gromov) in their midst, but when our peasant finds himself goaded into denouncing the bald one for fomenting a strike where the peasant has been hired as a scab, the peasant realizes that he’s unwittingly caused the arrest of his own cousin as well, just as the title figure in Mother unwittingly caused her son’s arrest. The wife beats her fists against the traitor, and when he goes to protest injustice at the factory and makes a violent scene, he gets arrested and shipped off to fight in the newly declared war, the Great War or World War I.

This war is defined as the result of finagling among financiers who profit from the labor of soldiers just as they’ve been profiting from farmers. A roomful of identical stuffed shirts in glittering finery, presented with their heads cut out of frame, observes that apart from its obvious advantages, war will take the peasants’ minds off strikes and revolutions.

Cross-cutting between the parallel activities of bowler-hatted speculators at the stock exchange and the soldiers dying in muck becomes the cinematic equivalent of a political pamphlet and prepares the viewer for a military uprising when soldiers are called upon to defend the fatcats who rule the provisional government of February to October 1917, with their monocles and pinstripes and, among the women, gloves and feathered fans.

Choices like this support Leyda’s opinion of The End of St. Petersburg as “the most deliberately symbolistic of Pudovkin’s films, and the influence of Alexander Blok’s poetry and of Andrei Byely’s novel, Petersburg, can still be detected in this rich film.”

Leyda is worth quoting further: “Indeed, the film’s comments on ‘war’ seem far more meaningful than its comments on ‘revolution’. The man who made the agonizing battlefield scenes of The End of St. Petersburg had seen both real battlefields and the battlefields shown in [D.W. Griffith’s] The Birth of a Nation (1914), but the man who related those scenes to the frantically grabbing scenes at the stock exchange, in a brilliant image of ‘encouragement’, had stepped intellectually beyond his master Griffith.”

As the October Revolution wasn’t put down, the ending is “happy”, albeit intriguingly subdued, as it focuses on its three long-suffering characters who are considerably less triumphal than the blaring title cards.

The allegedly decadent provisional government would also be satirized by association with the 1871 Paris Commune in a truly delirious film from Grigori Kozintsev and Leonid Trauberg, The New Babylon (Novyy Vavilon, 1929), a late silent released with a score by Dmitri Shostakovich. Pudovkin appears in it. A Blu-ray of that would be well in order. 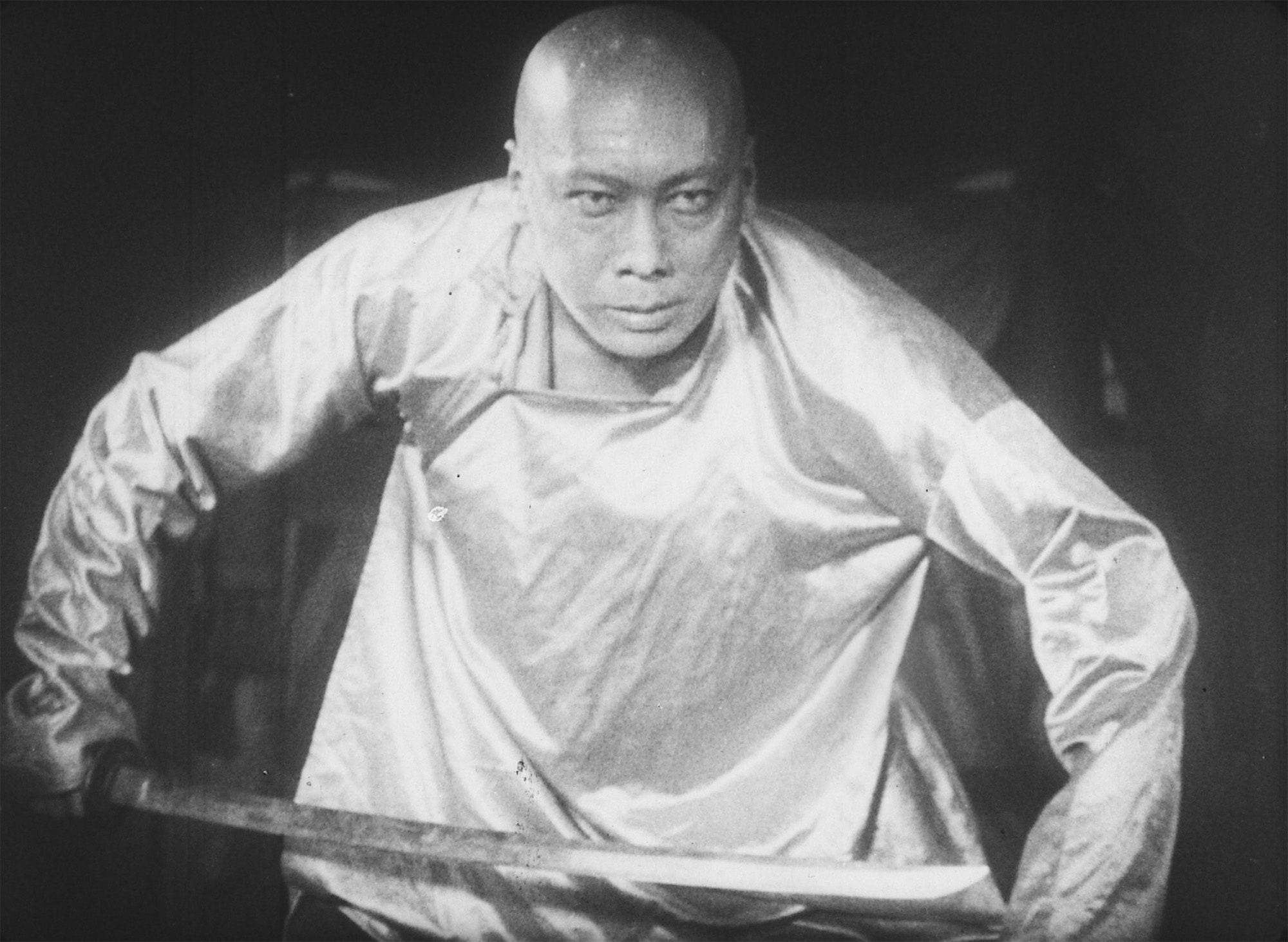 The third film in Pudovkin’s Revolution trilogy is Storm Over Asia (Potomok Chingiskhana, 1928), presented in a 2K scan (not a digital restoration) by Lobster Films. It still looks good as shot by Golovnya in the bleakly magnificent Mongolian steppes. The story appears to take place in Mongolia under the control of the British Army. According to Jan-Christopher Horak’s commentary, Pudovkin referred to this as “poetic license” when it was really a historic license. Various soldiers invaded Siberia and Russia during WWI, but the only foreigners to occupy Mongolia were the Tsar’s Imperial troops, who imposed various taxes and restrictions on the native nomads.

The Russian public probably had little trouble swallowing the fiction about England because it was remembered that they’d participated in the Crimean War in the 1850s. Nevertheless, this sleight of hand begs the question of why such “license” was desirable. The film wants to portray Red Army partisans as heroes, which means they must be placed in Mongolia; one dying leader is played by Chistyakov. In other words, the idea of Russian foreigners on Mongolian soil can’t be seen as entirely negative, especially if Russians were, in fact, currently there.

So, the British in this case are convenient all-purpose substitutes for imperialist and capitalist interests in general, and they are shown in mutual back-patting with local Buddhist lamas and their lavish religious traditions. Pudovkin presents many semi-documentary minutes of Buddhist ritual and splendor, as couched within atheist criticism of organized religion as oppressors of the people. Thus, the first lama we see tries to claim a valuable fox fur from a nomad family, which hardly seems a spiritual proclivity, and this fur’s fate as it’s pocketed by dishonest and racist foreign traders becomes crucial to the story’s trajectory.

Our hero is a young Mongolian nomad played by ethnically authentic Valéry Inkijinoff, later a busy European character actor in such films as Fritz Lang’s The Tiger of Eschnapur (1959) and Philippe De Broca’s Up to His Ears (1965). Receiving the valuable fur from his father (played by the actor’s real father), our young nomad is cheated of its value and flees for the hills after getting in a fight with the trader. He briefly joins Red partisans, more or less as something to do.

After being captured, a coincidence leads the occupying commander to use the wounded prisoner as a puppet leader, proclaiming him a direct descendant of Genghis Khan. As Horak notes, more than ten percent of Mongolian males today could make the same claim. The ending of the film has always been controversial, especially among doctrinaire Soviet critics, for blasting into full-blown symbolism.

Pudovkin’s ending provides a literal whirlwind of edits, some more rapid than the eye can process and create a blur of mentally overlapping images. This technique complements earlier moments in which troops of foreign soldiers were edited with lapses of footage, creating a mechanical stop-motion effect. Such glorious demonstrations of technique would get the avant-garde into trouble with dreaded accusations of “formalism”.

Leyda: “To all who were interested in the content-excuse for the film, this end was an evasion. But how else was Pudovkin to end a film subject whose attraction for him had been its fable and exotic imagery, except by hyperbole? A realistic revolutionary end would have been inconsistent with the tale-spinning character of the film and would have been as jolting a sensation as Pudovkin’s own well-known example of a made-up face against a real landscape — though here it would have seemed a real face against a painted landscape. Golovnya’s field-day may have been Pudovkin’s compensation for deficiencies in ideology and structure.”

When critics opine that Pudovkin’s dozen or so talkies are less adventurous, they mean that he pulled back into the kosher confines of “socialist realism” while pursuing his approved subject matters. His later films certainly won their share of prizes, and it would be good to see them and judge for ourselves, but they’ve been scarcer outside of Russia than his silent classics.

For now, this Blu-ray provides a significant one-stop-shop for possibly the most humane master of Soviet montage and a chance to chart his evolution of technical genius as guided by a sympathetic heart.