Wasn't That a Time: The Weavers, the Blacklist, and the Battle for the Soul of America
Jesse Jarnow
Da Capo Press

Wasn’t That a Time: The Weavers, the Blacklist, and the Battle for the Soul of America recounts the Weavers’ celebrity while resurfacing their notable contributions to popular culture. Author Jesse Jarnow leads readers into a precise and detailed examination of the Weavers’ career contextualized within anti-communist America.

Drawing the red-baiters’ wrath and hysteria, the Weavers battled to define their musical identities, all the while reneging the communist identification foisted onto them. Jarnow asserts the Weavers’ were indeed members of left-leaning organizations including the Young Communist League. He delves into their upbringing to root out their attendance at communist or socialist summer camps. Even their endorsements of progressive politicians, including Henry Wallace (the only congressman from the American Labor Party) and Vito Marcantonio, were derided as exemplars of un-Americanism. In reality, the Weavers deemed their social and political affiliations as signifiers of generational solidarity.

The Weavers believed music inspired action and their role in popular music was “about singing along, the harmony and the connection” (238). Collectivity and community support are not radical ideologies, yet the Weavers’ position as the voice of the silent generation cast them as subversives. But anyone who was paying attention realized the Weavers were “musicians, not politicians. The only platform [they] can stand on is the songs” (3). Each individual band member believed unequivocally in the power of music. For the Weavers, “art was a weapon” (12) yielded to raise consciousness, develop empathy, and strengthen community. The band’s quest to establish progressive change is the central facet in which Jarnow undertakes the Weavers’ social and cultural resurrection.

Jarnow methodically analyzes the markers of political and politicized culture. Relying on primary sources, the band’s HUAC testimony, and their own reflections of their career, Jarnow insists the Weavers’ never used their spotlight as an overt political platform. Rather, their music and empathy for the working class struggle were weaponized and politicized to undermine their cultural significance and the power of music to incite social change. The Red Scare became a convenient theater for dismissing dissent as un-American while ensuring the maintenance of dominant culture.

Jarnow saves his most compelling critique for the members of the status quo: the politicians, media heads, and music industry executives who feared change because it threatened their capitalistic endeavors. For example, when the Weavers emerged from the blacklist, they were invited by NBC to perform on television. Wary of the politicized rhetoric composing their legacy, however, NBC required the band to swear a loyalty oath. The Weavers opposed this method of control and Hays asseverated, “we feel very strongly that no private business establishment such as NBC has the power or the right to require proof of any citizen’s patriotism” (203).

The Weavers did avow specific political ideologies while believing dissent and the collective call for progressive change were innate acts of patriotism. Their name, in particular, was derived from a play by German Nobel Prize-winning author Gerhart Hauptmann, who described a scene “in which weavers, out on strike, are marching from village to village singing protest songs” (59). Jarnow is steadfast in representing the Weavers’ as a powerful cultural antidote to propaganda. Their vision of American politics bolstered human rights and squelched inequality. The Weavers’ music was intended to disarm systematic oppression in the United States and across the globe. They represented the belief that America was capable of establishing a progressive society for all citizens rather than a system benefiting a few stakeholders. Fear tactics and anti-communist hyperbole were fundamental in marginalizing the Weavers’ voices.

Wasn’t That a Time demonstrates the Weavers’ vast web of influence. Jarnow sees the erasure of their career as primarily due to the music industry’s penchant for the next big act and the strictures dictated by commercialism. As the Folk Revival of the 1960s boomed, the genre became a part of the popular lexicon, but the Weavers’ contributions weren’t often included in the narrative. For example, the Weavers’ staple “(The Wreck of the) John B”, was more widely consumed after Al Jardine reworked the single for the Beach Boys as “Sloop John B”. The Kingston Trio also found a doorway into popular music utilizing the Weavers’ brand of folk. 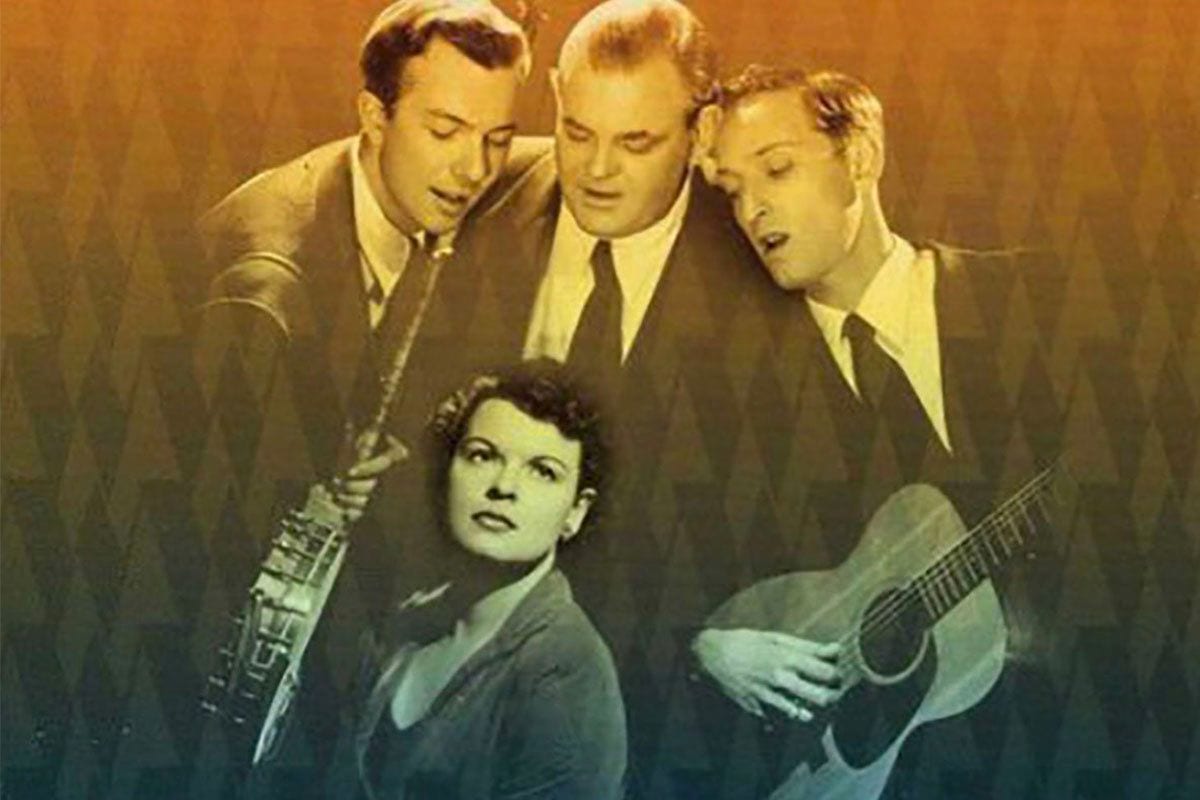 From the cover of Best of the Vanguard Years (Vanguard, 2001)

Jarnow relies on musical icons to fully illustrate the Weavers’ prominence. In one noteworthy example, he relates how “teenagers Jerry Garcia and Robert Hunter recognized the blacklisted Weavers as authentic class and history conscious members of an emerging American counterculture” (224). According to Jarnow, the Weavers’ would have understood Garcia’s statement as evidence of music’s ability to coalesce community.

Jarnow’s focus is on Seeger and Hays and their mythos eclipses Hellerman’s and Gilbert’s. Especially significant is Gilbert’s criticism of the media’s sexist representation of her role in the group and later becoming a stalwart women’s rights activist. However, her role, much as Hellerman’s, are rendered secondary. Despite this, Jarnow thoughtfully undertakes the appropriation of black culture and the fame the Weavers’ garnered by their versions of Lead Belly’s “Goodnight, Irene” and “Midnight Special”.

Jarnow problematizes the Weaver’s use Solomon Linda’s “Wimoweh” made popular as the Token’s hit “The Lion Sleeps Tonight”. He questions why the Weavers remained inactive when they learned the song was effectively stolen under the claim that South African copyright was not valid in the United States and Linda’s authorship erased. Jarnow includes critical voices who “accused the Weavers themselves of doing a disservice to the struggle against the blacklist by conducting their professional lives in such a way as to alienate one of their most powerful allies in such a struggle — the Negro people” (119). Jarnow doesn’t allow history to sanctify the Weavers, who played a hand in reaffirming cultural appropriation and racial inequity.

Wasn’t That a Time is an essential text in reaffirming the Weavers’ contemporary influence. Jarnow’s writing is engaging. He casts the Weavers’ careers and identities in a colloquial tone firmly aligning the text with one of folk music’s core tenets. Wasn’t That a Time attests to the inspiring the power of popular culture and music.