West My Friend is billed as a folk trio. Though the Canadian outfit is quick to slash genre expectations right away on their new album. In Constellation begins with an a capella performance from vocalist Eden Oliver that verges towards jazz, her lithe vocals commanding attention as she delivers ensnaring runs and scats. The melody of that opening number, “Fall Knows”, is firmly set in traditional folk. But the ways the band expand and subvert the expectations of a folk band are immediately established in captivating fashion. Like Jethro Tull to rock or Punch Brothers to bluegrass, some of the most revered names in contemporary music are progressive innovators who deftly tow their genres into new territory. West My Friend show tinges of that brilliance on their promising new album, all the while getting to the crux of what makes folk music what it is—stirring, often personal stories.

In Constellation maintains a sense of growth throughout its seven tracks. Played back-to-back, it becomes clear that each song retains the musical strengths of the other while bringing scintillating new elements to the table. “Salt Water” follows up on “Fall Knows” with a triumphant vocal cadence from Oliver, but introduces a full-on symphony orchestra. At its crescendo, guitar, accordion, and a slew of orchestral instruments accompany interwoven vocal harmonies. The end result is just as West My Friend bills it—melancholic yet optimistic. 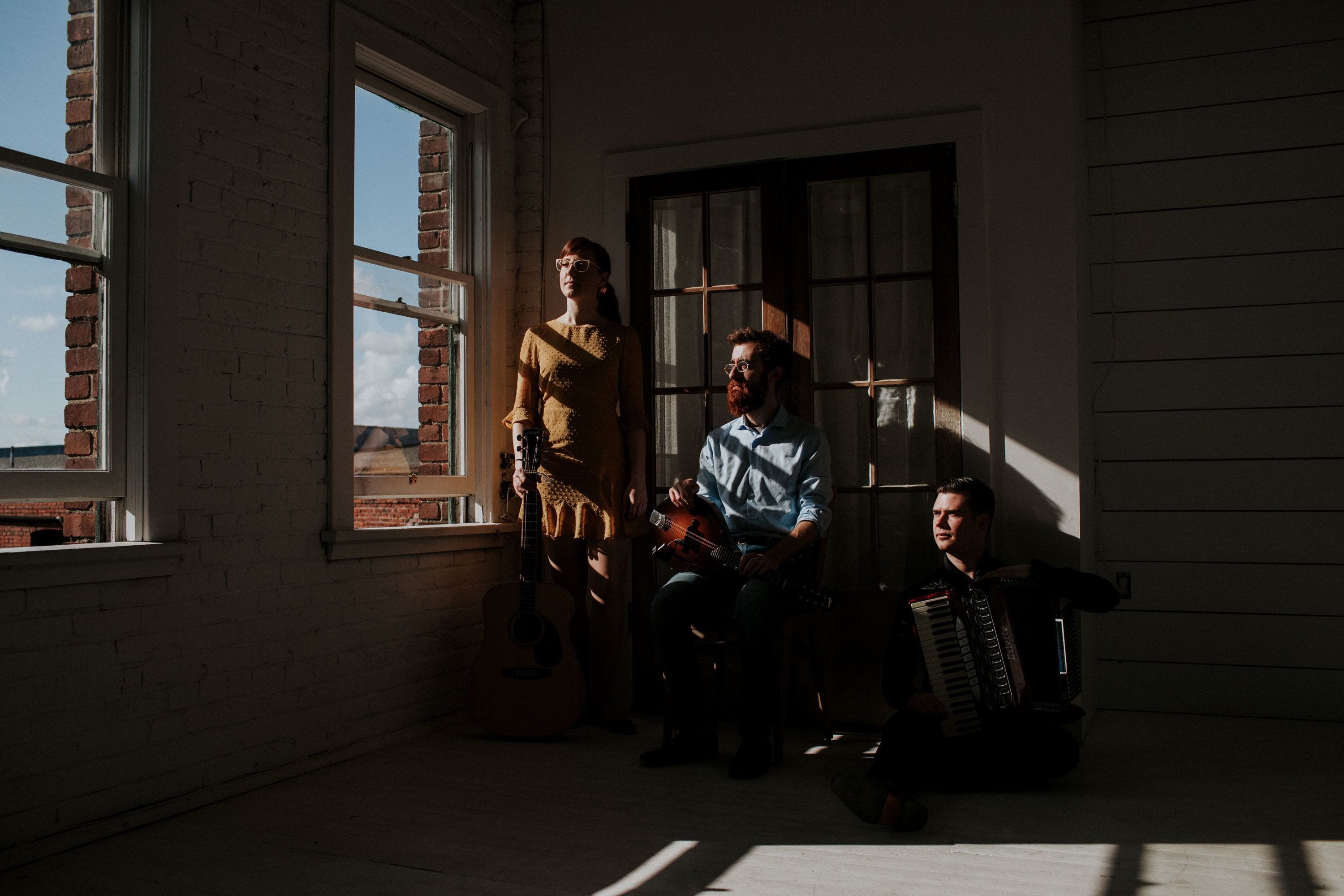 “Build a Bed” begins with more gorgeous harmonies while introducing sprightly tints of piano and the vivid tones of lively mandolin picking into the fold. Accompanied often by the robustness of an orchestra on top of everything else, the band’s arrangements never falter. If the virtuosic Mother Falcon delivered a similarly moving orchestral sound with their studio cuts, West My Friend drives that same intent closer to perfection with performances that give each instrument ample space to be heard. A sturdy nod has to be given in the direction of producer Joby Baker and co-producer and arranger Adrian Dolan, then.

Later on, “Old Song” begins with a melodious opening verse similar to Tin Pan Alley-era vocal jazz. It shifts between that vibe and straight-shooting blues before molting that veneer for another, leaning full-on into the classical conveyances of the symphony orchestra. Then, it ends somewhere back on Broadway. They establish cohesive, exciting movements over just over five minutes, and while lending it your ear, it feels like the album’s magnum opus. Comparatively, “Shape of a Home”, which predates it, carries forward as much more within the standard structure of contemporary musical dialect. That isn’t to shun its prowess. However, as its lighter orchestral tones offer themselves to a subtler, doleful chamber folk sound that captivates, almost in the hymnal sense.

“All These Things” finds itself shifting in dynamics as a journey between two great crescendos. At its highest points, it procures a heart-stirring flow of raw vocal ability soaring alongside victorious strings and horns. There’s something to be said for its more introspective moments, too, especially in the reflective, percussive poetry following its first come-down. Its strummier moments in the build-up recall the Punch Brothers and Chris Thile’s careful loom over the verses of “Julep”. The album proceeds to wrap up in a bow with the gentle, celestial reflections of “An Education”, once again building into one final exultant burst of symphonic instrumentation while rounding back again to that aforementioned tagline—”melancholic yet optimistic”.

It could be said of In Constellation-era West My Friend as a whole. Amidst the musical wonderment that stands tall throughout the album, the emotion of the storytelling folk that remains at its center cannot be discounted. Moments before that last great crescendo, Oliver recants with a croon, “I’m sure I’ll disappoint.”

She tells PopMatters, “In our ten years as a band, we’ve noticed that sometimes people aren’t sure what to do with us. Our instrumentation, our songwriting, our atypical arranging… In Constellation is what happened when we leaned into that impulse and didn’t hold back. Recording the album was a celebration as we welcomed old (and new) friends into the studio and watched the endless layers come together. There were times when all we could do was laugh at the unbridled ridiculousness of it all and times where the arrangements reduced us to tears. This is not an album we could have made in our early years as a band.

“The songs on the album circle around belonging and purpose, with topics from love to anxiety to death and rebirth. Writing them was like working through a sense of feeling stuck, unsure, and disconnected—one that was personal but that we also see playing out in small and large ways around us. It’s as if certainty is always on the other side of the door and writing songs lets you peer through the peephole. With the world in crisis environmentally and socially, what else is there to write about other than trying to see clearly and be kind? After all, the album is (ostensibly) folk music.”