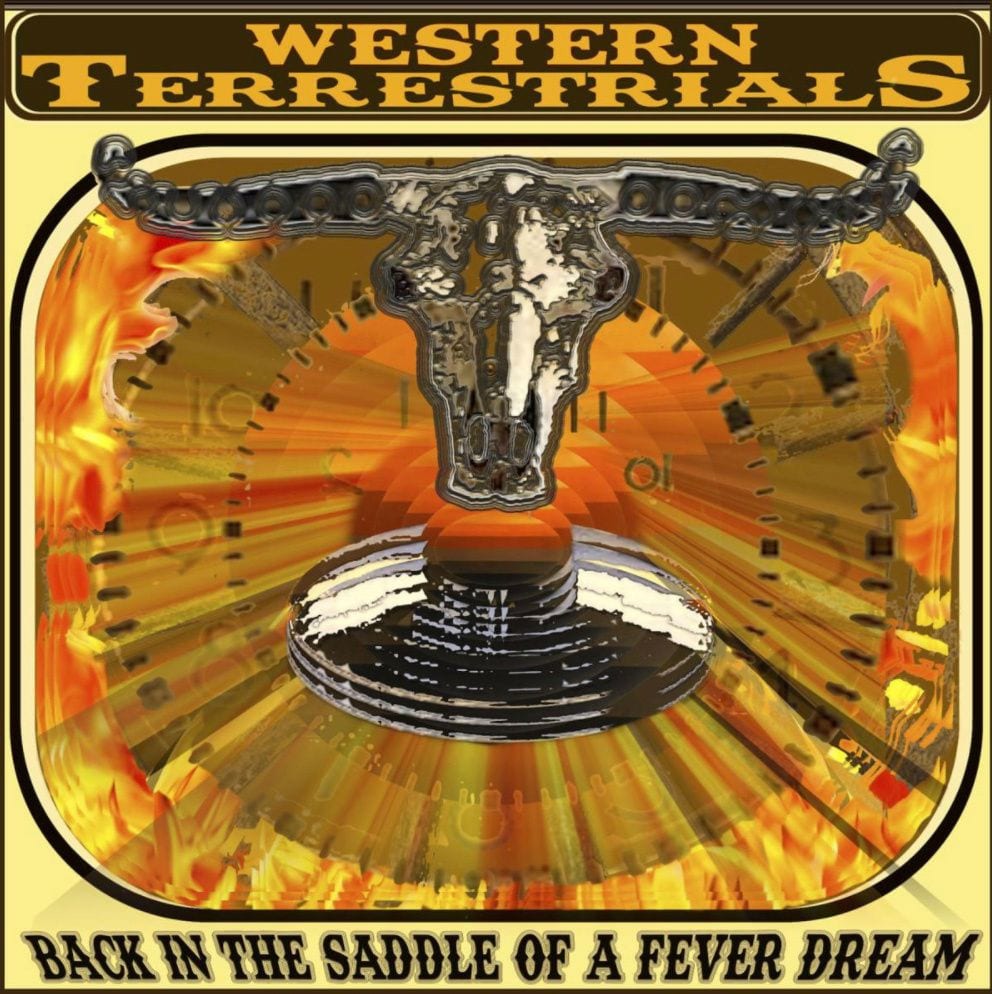 When one considers country-western music, the Green Mountain state doesn’t necessarily spring to mind. But then again, neither do astral planes, Nietzsche’s Doctrine of Eternal Recurrence, or UFOs. But the White River Junction, Vermont based Western Terrestrials aim to broaden the horizons of a genre many have come to equate with Nashville’s narrowly defined set of tropes on their July fourth release, Back in the Saddle of a Fever Dream.

The sophomore record comes hot on the trail of 2019’s critically lauded independent release Clearlake Conspiracy. On that record, bandleader Nick Charyk pulled no punches in addressing the stagnant state of Big Radio Country. “On our last album we were kind of deliberately antagonizing Nashville a bit.” He admits, describing tracks like ‘Automated Trucker Blues’ and ‘WWWJD?’ (What Would Waylon Jennings Do?) which illustrate how Nashville Pop lip service aficionados have turned classic country artists into parodies of themselves.

If Clearlake Conspiracy was a teenager’s slide-fueled cowpunk sneer at the state of Big Country Radio, In the Saddle of a Fever Dream is the older, sophisticated sibling’s discussion on what the genre could be, given a breath of fresh air with new talent. Of the recording process, Charyk says in our email exchange,”Here’s the thing, we absolutely love country music. Not just one era of country, or some niche of the genre. We revere the entire living-tradition. So when we went to Nashville to record Clearlake Conspiracy, it felt like the things we were saying were sacrilegious. I imagined a bolt of lightning coming down as soon as we pressed “record” in the studio…

“But something very different happened. The Nashville folks we were working with, and folks who reached out after the record came out, got behind our indictment of country radio. But they pushed us to go farther. Folks said it’s one thing to take pot shots, it’s another thing entirely to actually push the genre forward, and put your own unique stamp on things.”

Back in the Saddle of a Fever Dream was recorded in Nashville dodging twisters, a God’s honest plague, and other circumstances that felt like divine intervention trying to thwart us. The apocalyptic feelings forced us to tap into something more universal. I think we got a brief, fever dream fueled, glimpse at what a reawakened, chaotic, and ever evolving strand of country music looks like. Something timeless. Something weary from remaining dormant for too long. Something stirring to wake back up.”

Typically, genre-bending is an enterprise undertaken alone, but despite their recent emergence in the Alt-country world, Western Terrestrials have gotten help from well established partners. Ketch Secor of Old Crow Medicine Show was so impressed with Clearlake Conspiracy he contacted Charyk with a cryptic “Ethan Allen wuz an alien.” Cue. Charyk birthed the song ‘Ethan Alien’, to which an incredulous Secor contributed his signature harmonica melody.

Dean Miller, son of the legendary Roger Miller, was an early fan of the clever lyrical exuberance and true-to-form long haul sonic format. At his invitation, the group recorded “Roger Miller Time” and four additional tracks at the Omnisound Studios on Music Row. The eponymous track mixes Sr.’s fondness for both lyric play, whether articulate or campy lyrics, while retaining the swing and pure fun of a Roger Miller tune.

A final guest star on Back in the Saddle of a Fever Dream is Georgette Jones who duets opposite Charyk on “Who’s Gonna Fill these Boots?” The combined chorus is a challenge in the form of a question. If Big Radio Country suffers from a crisis of identity, it’s done its best to fill that void by dropping names in every new single, rather than providing substance. It’s well known that the devil can cite scripture for his purpose, but what sets the Western Terrestrials apart from so many ‘Country ‘Cos We Say We Are’ acts, is the band’s expansion of the genre.

Across the nine sprawling tracks of Back in the Saddle of a Fever Dream one finds examples of early rock via the Elvis twinged “Flying Saucer Rock n’ Roll”, and proper sad bastard balladry on tracks like “King’s Highway”, or “Fix this Broken Heart”. But where the Western Terrestrials really shine is with their psychedelica. The album’s titular track, “Space Cowboy’s Got the Blues” is the sonic equivalent of Oliver Stone’s Natural Born Killers. The music on it and a sister track “Space Coyote” is striking, haunting even, a type of Riders on the Storm landscape and late era Jim Morrison lyrical mysticism.

The Western Terrestrials, like many other working bands, walk a fine line. They love, play, and create a form of music whose industry is quite likely the antithesis to their beliefs about that music. And while it’s fun to mock the glaring inequities of the industry, the Western Terrestrials are pushing the genre forward, testing the boundaries of what classifies as country-western.

Intergalactic travel and space cowboys might be a hard sell to the modern era’s denim tucked into the boots crowd, but the breadth and scope displayed from Western Swing to Country Psychedelic, make Western Terrestrials one of the most exciting bands you have yet to hear