Every iconic superhero has a defining trait. For Superman, it’s unyielding idealism. For Captain America, it’s “American values” at their most pure. For Spider-Man, it’s exercising power and responsibility. At this point, Spider-Man is such an icon that it’s hard to imagine associating him with any other characteristics. It does, however, inspire an interesting thought experiment.

What if Spider-Man’s concept of power and responsibility were different?

Any time a hero operates under entirely different laurels, it often undermines the core of that character. Spider-Man acting like Wolverine just doesn’t work because it requires him to radically change his personality. For most of these scenarios, there’s no way to keep a superhero character true to their core, especially someone as well-known as Spider-Man.

However, there are a select few stories that offer alternative takes to a superhero that don’t require that they act completely out of character. What If? Punisher #1 offers a different path for Spider-Man, but one that mixes his notions of responsibility with the more brutal tactics of the Punisher. Logistically speaking, Spider-Man is better-equipped to utilize these tactics than Frank Castle. While Castle is a highly-trained soldier, he doesn’t have super-powers or a spider sense. In theory, Spider-Man might actually be a better Punisher than Frank ever could.

Carl Potts and Juanan Ramirez make a strong case that there’s some validity to this storytelling theory. It doesn’t even require that Spider-Man’s story radically change. The most critical elements of his traditional path are still intact. He gets bit by a radioactive spider, he fails to stop a burglar, and his Uncle Ben dies because of his inaction. Unlike other What If? stories, this one doesn’t try to reinvent the character. It just adjusts the circumstances. 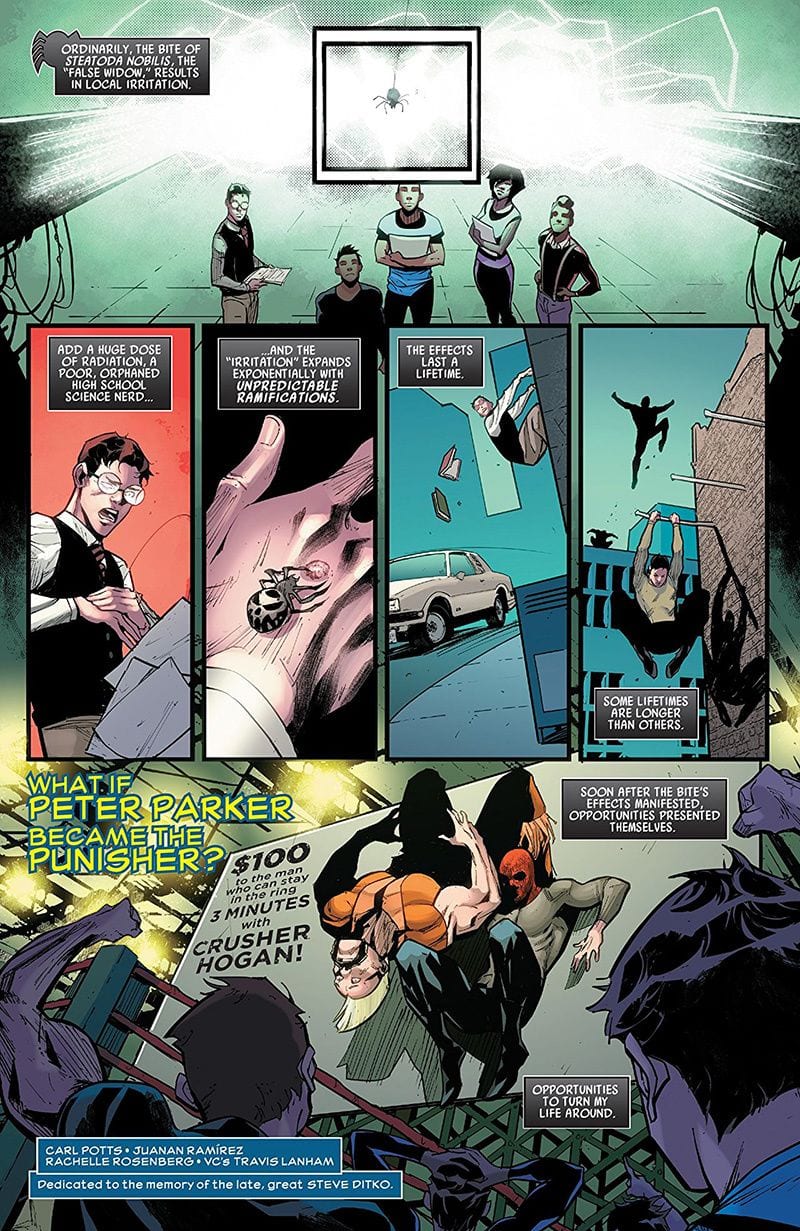 In this case, it’s just a matter of Peter’s encounter with the burglar who killed his uncle going differently. Some aspects are similar to the “other” Spider-Man, but they’re altered enough to significantly change Spider-Man’s understanding of power and responsibility. While Spider-Man still operates under that iconic axiom, his idea of what it means is a lot less merciful.

Granted, Peter Parker on his worst day is nowhere near as violent as Frank Castle at his best, but this version of Spider-Man is not exactly friendly. There are fewer wisecracks and more bullets in his tactics. Like Frank Castle, he approaches his responsibilities the same way a soldier approaches war. Instead of using that genius-level IQ to make fat jokes about the Kingpin, Peter channels it into functional battle tactics. It’s debatable how much this is in keeping with his personality, but there’s no denying the results.

True to his punishing persona, this version of Spider-Man doesn’t stop at just tying villains up in webs and leaving them for the NYPD to collect. He uses both his power and his brilliance to effectively kill his opponents. This, in and of itself, marks the biggest turning point for Peter Parker’s journey as Spider-Man. Like Batman and Daredevil, Spider-Man makes a big deal about not killing his enemies. This iteration has no such qualms. From his point of view, it’s a responsible use of his power. 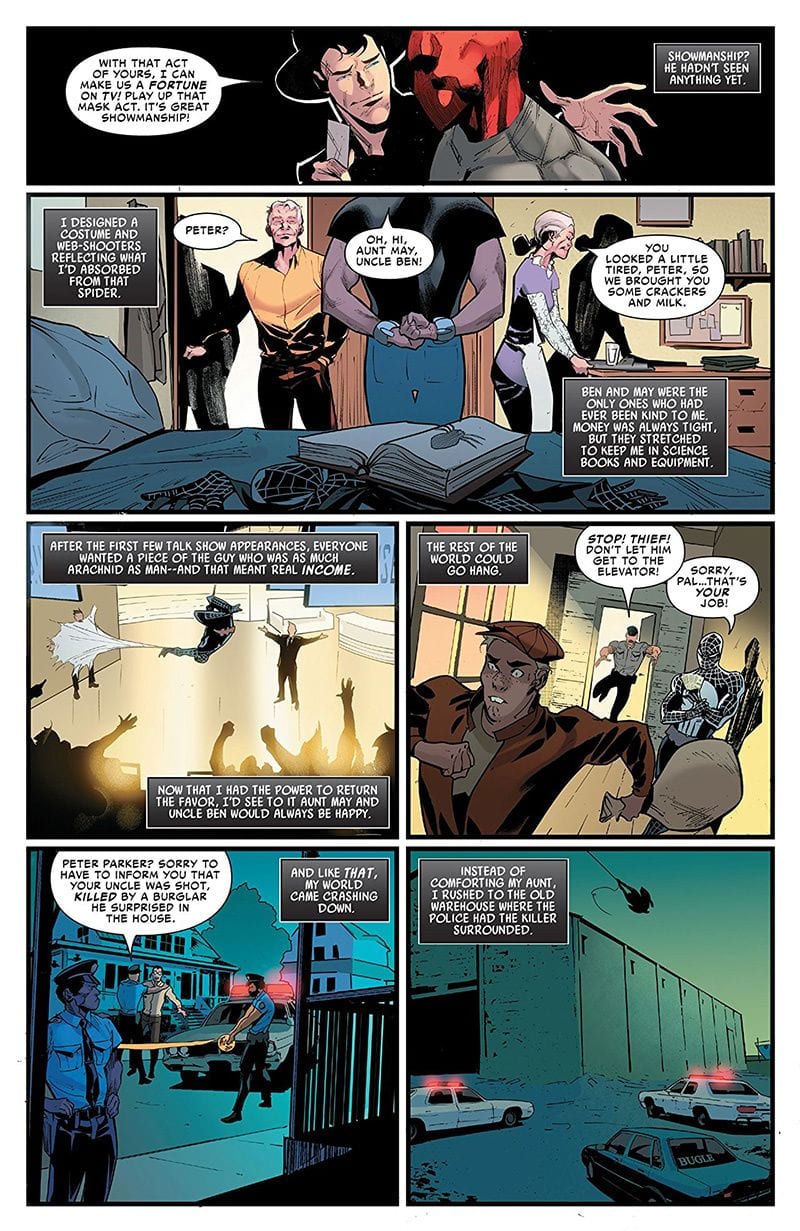 To be fair, Peter tries to be merciful at first, but quickly learns this doesn’t stop these people in the long run. It just makes them more enraged when they try to get back at him. Pragmatically speaking, he has to use lethal force in order to protect innocent people. It’s because he’s willing to go that far that some of those he couldn’t save in the mainline universe are alive in this alternate timeline. These kinds of differences are not trivial. If anything, it highlights a profound flaw in Spider-Man’s traditional tactics.

As the Punisher, Spider-Man doesn’t have to endure countless battles with the same enemies. He takes them out and they’re no longer a threat. The likes of Sandman, Doc Ock, Mysterio, and Vulture never get a chance to become bitter rivals. On top of that, they never get a chance to hurt more people or cause more damage.

While that means many iconic stories and epic battles can no longer occur, it also means that the people of New York are safer. Peter Parker’s family and loved ones are safer. All the collateral damage, hardship, and spectacle from seeing Spider-Man battle the Green Goblin for the millionth time never happens. On paper, this version of Spider-Man is more responsible than any other version, including the mainline version. 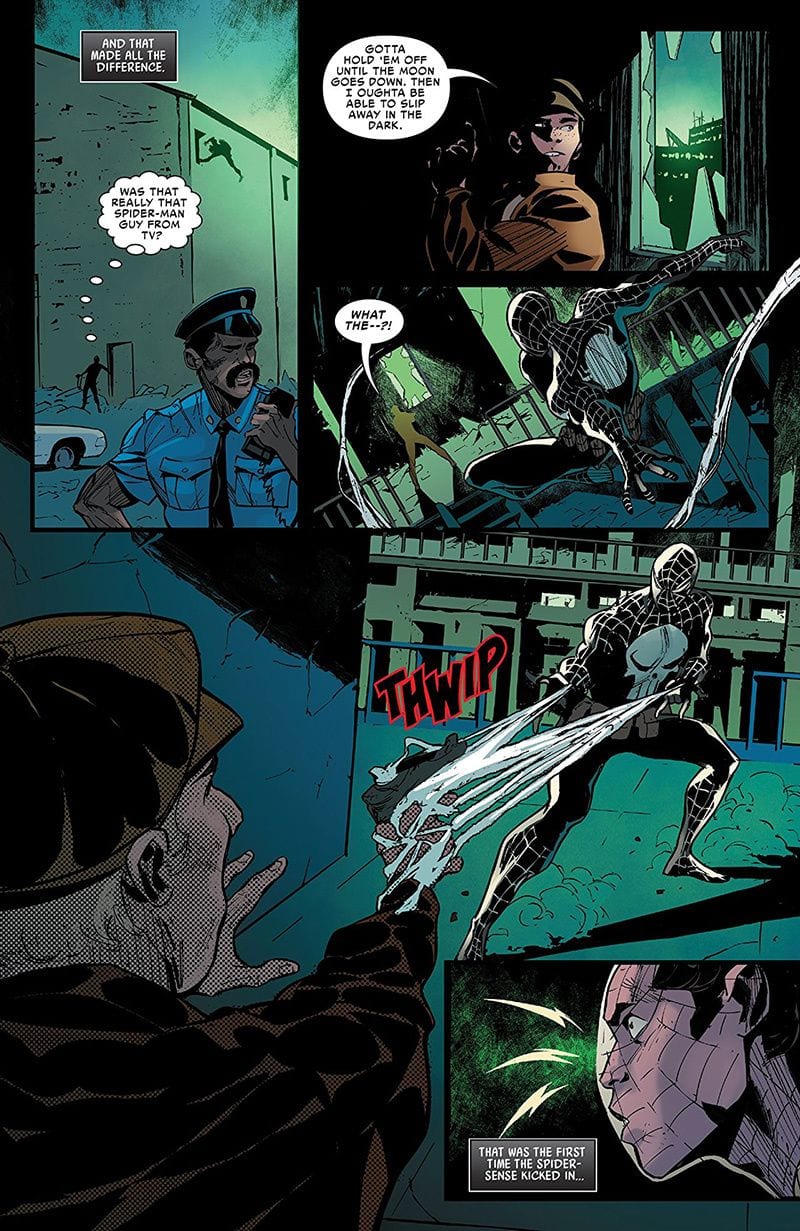 As a result, What If? Punisher #1 has major implications for the entire concept of Spider-Man. It exposes the flaw in Peter’s idea that not killing his enemies constitutes responsibility. The end of the story implies that the cost of this approach isn’t very high. In fact, it comes with significant benefits, both in terms of his personal life and his overall effectiveness as a superhero. There are still consequences to this approach, but few of those consequences ever manifest.

Either this constitutes a flaw in the story or it exposes the unspoken ineptitude of the mainline Spider-Man. It’s not clear whether Potts and Ramirez are trying to do either. Intentional or not, the message is clear. Spider-Man is more responsible when he’s willing to kill his enemies instead of sparing them. Crime actually goes down in New York. The people he loves are alive and safer.

There’s also no indication that killing his enemies causes Peter any undue guilt. His willingness to do so comes off as a minor issue, which feels like an oversight. Frank Castle is a soldier who was conditioned to kill. Peter Parker is just a high school student who got super powers by accident. Even with the alterations to his backstory, he seems to embrace these tactics too easily. He’s never haunted by his decisions or plagued with doubt. He just shrugs it off because in his mind, it’s a responsible use of his powers. By nearly every measure, he’s not wrong.

There are a lot of dynamics that What If? Punisher #1 doesn’t delve into, which makes the story feel incomplete. The ending also comes off as contrived in how it attempts to tie Peter Parker’s story with that of Frank Castle. That story still raises a lot of questions about what it means to be responsible and too many of them go unanswered. Even if the narrative is frustratingly condensed, it still succeeds in proving that Spider-Man’s unwillingness to punish his enemies is extremely irresponsible.