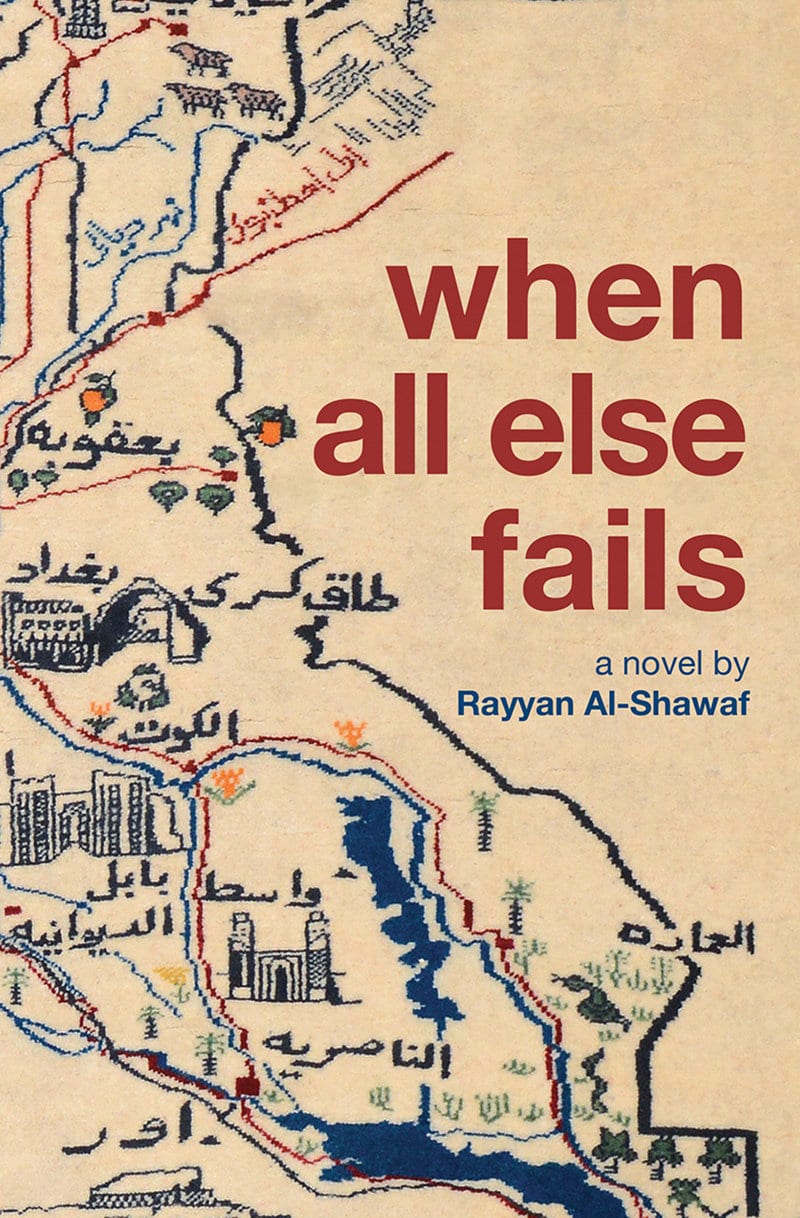 When All Else Fails
Rayyan Al-Shawaf
Interlink

“On the morning of September 12th, 2001, I set off by car […] to see Hashem, though I wasn’t sure why.” So begins Rayyan Al-Shawaf‘s debut novel, When All Else Fails¸ immediately announcing its intent to navigate the post-9/11 Arab experience in the United States. It’s an overtly political novel, which follows its main character Hunayn, a frustrated Iraqi student who tries to adjust to life in the United States and later in Lebanon. We follow his growing tension and faltering sense of identity as he weaves in and out of various social and political circles. To summarize: he is rejected by almost all of them.

As an Iraqi student in Florida, he knows, on September 12, that his life is about to be impacted by the terrorist attacks. He is simply unaware of how deeply and how permanently he will be affected. His friend Hashem, whom he’s visiting when the novel opens, has a better sense of self-preservation: when Hunayn arrives, he finds his friend “practicing getting deported.” It’s a routine he has perfected: in five minutes, Hashem can “gather together those of his belongings he considers indispensable, cram them into one suitcase and one carry-on bag, and finish by standing on the sidewalk, luggage in hand and head bowed, waiting to be shoved into a police car.” It’s a sad but poignantly funny scene, and a hallmark of Al-Shawaf’s writing style.

As an Iraqi who grew up in Abu Dhabi, Rome (where he discovers the wonders of the Vatican, ancient history, and MTV), and Lebanon, Hunayn is no stranger to being uprooted and adjusting. He hopes he will survive the fallout of 9/11 because at least, in the United States, he has established a few strong friendships. These include Lewis, an American liberal, who always wants to “broaden his horizons”, having grown up in “suburban boredom”. But even Lewis will eventually reject Hunayn, because he primarily views him through a political lens. Hunayn will come to accept that being Arab is how most people will primarily label him.

Hunayn’s Christian identity doesn’t save him, as he briefly imagines it will. Being a Chaldean Iraqi, a member of the minority Catholic sect, Hunayn clings to that part of his identity: “I resolved not to detach my Christianity from the Iraqi whole of which it was an integral part, even if that would smooth my dealings with people who thought I was Muslim and detested me for it.” Indeed, he finds that he has little in common with both American and Lebanese Christians, and he is reluctant to betray his Muslim Arab friends by playing the only card he seems to hold.

There are parallel scenes in which he is violently beaten, in both Orlando and in Beirut, by “fellow” Christians. In fact, Hunayn suffers from violence at the hands of many groups of people, and the scenes are devastating and shocking.

And yet, Hunayn has another problem that is almost as serious as the political consequences of 9/11: he needs a girlfriend. Badly. He is a virgin at the novel’s opening, a crisis which he sets out to rectify, but his immaturity hurts his chances even more than the unfashionable Geo Metro he drives (Lewis promptly describes it as “a shitty car”). For example, Hunayn’s disappointment in seeing a naked Rasha (whose body doesn’t quite match those of the women he’s seen in porn movies) belies his anxiety. However, even when he is finally settled into a secure and sexually fulfilling relationship, he still feels incomplete — especially when his girlfriend’s political views sharply contrast with his own.

When All Else Fails is politically complex, and its humor is razor-sharp. Hunayn fears the effects of 9/11 but he also jokes mercilessly about politics and society – in the United States, Lebanon, the Arab gulf states. His descriptions of the many people he encounters (indeed, the novel feels like an allegory at times) are edgy and hilarious – as an outsider everywhere he goes, perhaps this irreverent perspective is his lasting legacy.