When I Arrived at the Castle
Emily Carroll
Koyama Press

I think of erotica and horror as opposite genres. When the image of a female body appears in a horror story, it’s usually scantily clad and in peril, making rape the subtext if not the overt threat. Vampires are romanticized rapists, their penetrating fangs barely a metaphor. They roofie victims with their charming looks and mesmerizing eyes, while werewolves and other clawed beasts consume without the pretense of a date. Either way, it’s rape, not sex, and so it’s anti-erotic.

I didn’t know anything about Carroll’s sexuality before reading the graphic novel (though I’ve since found her on a 2014 list of “Queer and Trans Women Comic Creators to Support this Holigay Season!“) 2014 is the release year her first major book, Through the Woods, earned her much-deserved, international acclaim (she’s from Canada, yet more evidence of that nation’s comics prominence). It compiled five of her webcomics into print form, soaking its pages in vibrant colors to pleasantly garish effects. 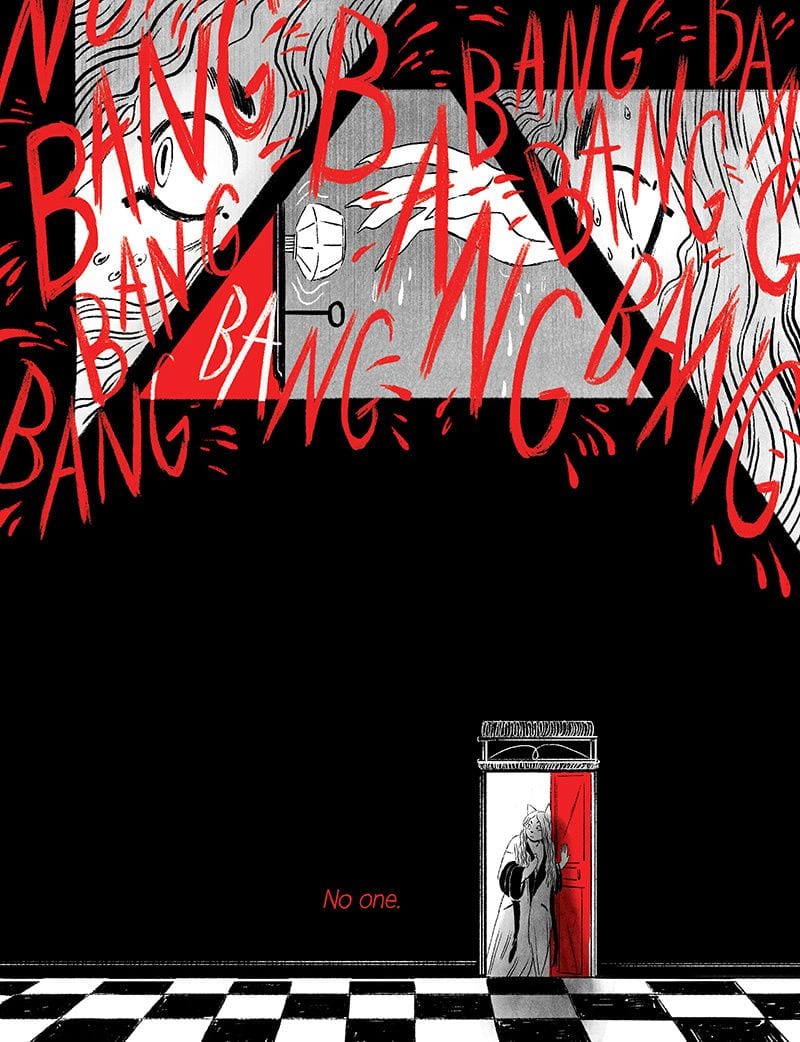 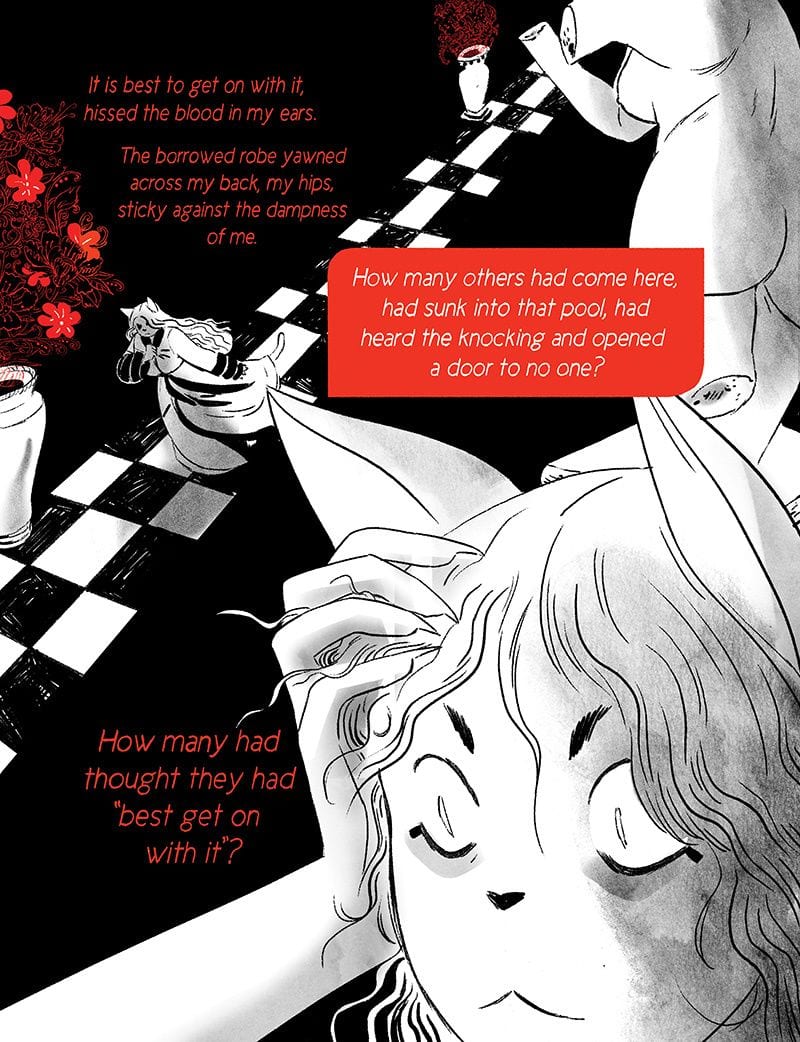 Her new book is comparatively restrained: one story, less than half the number of pages as the previous book, and only one color offsetting the black and white. Red. Of course she picked red. And as much as I love all the blues and yellows and greens and purples of the earlier tales, this simplified use of color is better. Coupled with Carroll’s vacillating black and white lines and negative spaces, the pages are darker in a literal if not thematic sense.

Otherwise Carroll’s style remains familiar: deceptively cartoonish figures that evoke a children’s picture book despite the puddles of blood oozing into the gutters. Not that there are many gutters. Carroll prefers ever-changing layouts that only rarely provide traditional panels or grids. Instead, the objects and interior spaces of the story world shape each page design. As the protagonist winds more deeply into the castle’s labyrinth interiors, Carroll finds new ways to visually surprise—a sequence of keyhole-shaped page-panels, an image-less two-page spread of white text on red background, a sudden sparse white background with no punctuating red. She favors full-page images too, an effect literally heightened by the 10 ½ x 8 book dimensions.

Like the cartoon figures, the plot seems deceptively simple: the heroine has come to kill a vampire in her castle lair. Except, okay, the heroine is an anthropomorphic cat. Which might make sense if the vampire were an anthropomorphic cat-vampire, but she’s not, she’s human, or at least humanish—when she’s not stripping off her skinsuit or uncurling the lower snake-like half of her body. Other times she’s aggressively two-legged and fleshy, as when she lounges barefoot in a cushioned chair, her naked calf angles invitingly toward her guest. Carroll draws one of her talk bubbles across her crotch, with the word “Your meekness” inside. As the vampire taunts her timid would-be killer, Carroll is playing with a visual metaphor, or two of them at once: the vampire is calling the cat a pussy. 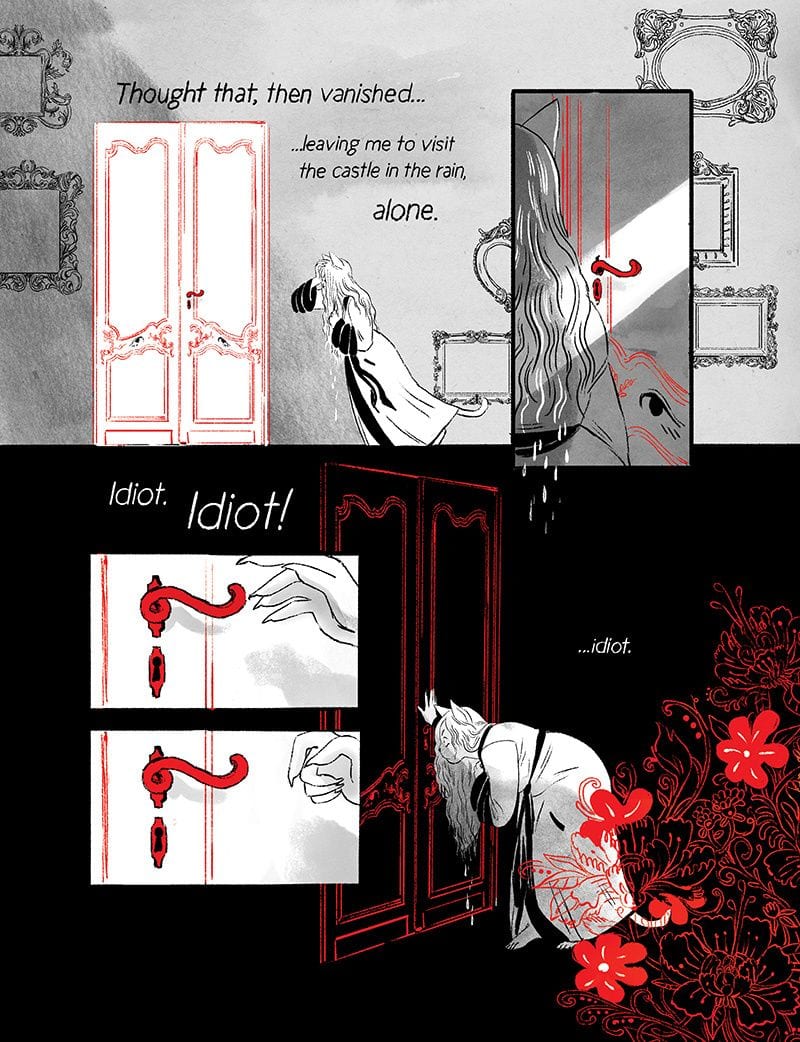 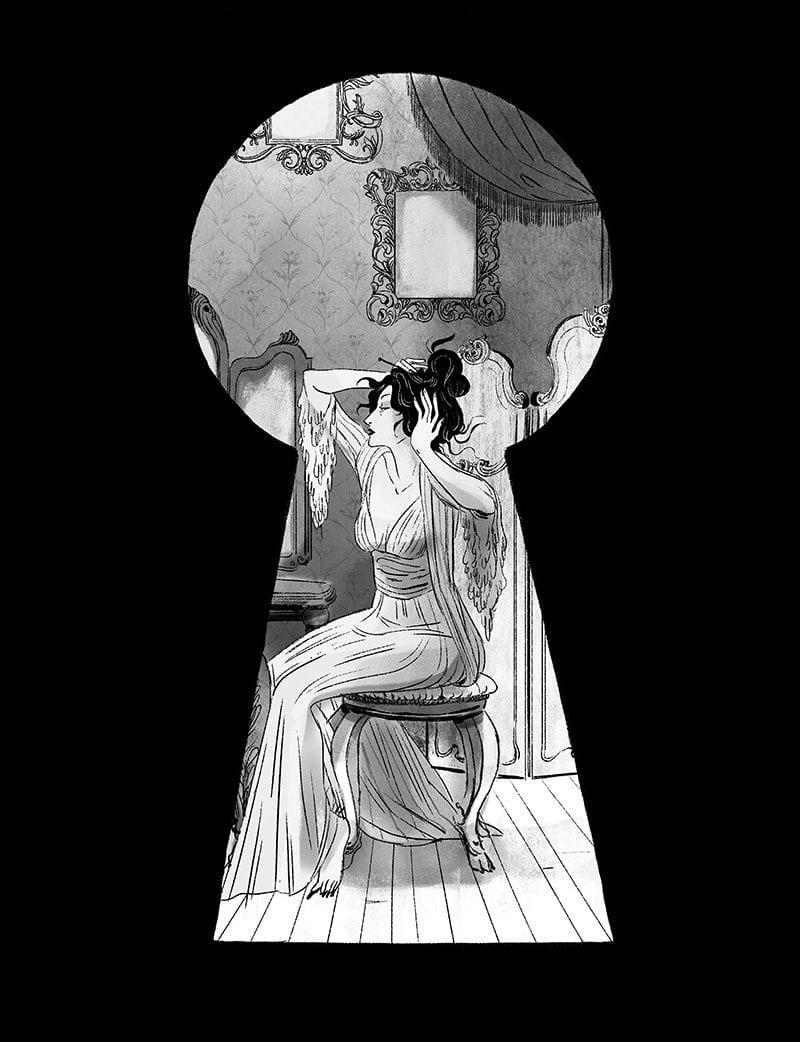 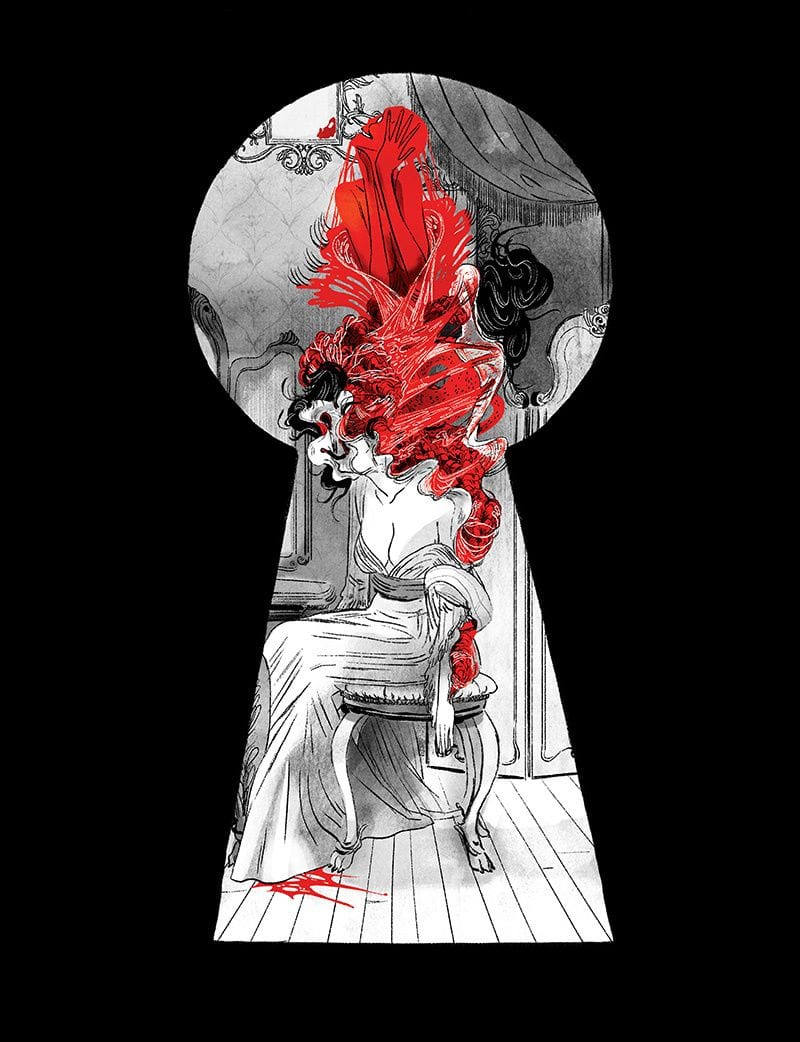 The sexual pun is the more important one. This would appear to be very much a lesbian vampire, and she wants the pussy to “kill her” (at least, in the erotic sense) and die trying. Lesbian vampires are as old as the genre (Joseph Sheridan Le Fanu’s 1871 Carmilla beat Bram Stoker’s Dracula to print by nearly two decades), but Carroll gives hers new unlife. If all the lip-licking and close-up cleavage and overflowing bathtubs don’t make the meaning clear, then the vampire’s ecstatic open-mouthed grin at the moment of her, um, plot climax probably won’t, either. In which case, you’ve enjoyed a perfectly fun gothic romp, no harm done. I recommend you next read Christina Rossetti’s wholesome poem, “Goblin Market” and admire the spiritual purity of sisterly affection.

But the rest of us are probably left unraveled, unsure where Carroll is drawing her line between erotic metaphor and blood-splattering literalness. And I lied about the climax. There’s a lot more yarn for this cat to untangle—including her own culpability, the origin of her feline identity, and the source of what at first seem like her misdirected talk bubbles. I also appreciate Carroll’s attention to body types. While the snakey vampire is supermodel thin, the cat has a deliberate plumpness that somehow avoids voluptuous clichés while also allowing the matter-of-fact folds of a large, strong body. Though I’m relieved not to live in an Emily Carroll world, I’m glad its inhabitants are more diverse than the superhero half of the comics multiverse.

While the page count is thin, Carroll’s new tale is more than twice the size as any of the skinny vignettes found in Through the Woods or at her wonderful website. (Be sure to check out the “The Worthington“.) When I Arrived at the Castle also unfolds over a tighter time span than the prior story—just a single evening—amplifying the continuous scene’s tension through patiently prolonged suspense. Like the cat protagonist, we arrive at the castle with the first page turn, and we leave only after … well, I don’t want to give too much away.