Well, it’s only been a few hours since the Great Pumpkin vanished, but you know what that means — the Christmas onslaught is on, and that goes for holiday albums, too. Fortunately, bringing the best of season’s greetings is Whitehorse, the Toronto-based husband-and-wife duo of Luke Doucet and Melissa McClelland, and you’ll want their music in your home for the holidays.

A Whitehorse Winter Classic, a nine-song collection that included seven stunning originals written by Doucet and McClelland, along with faithful, delightful renditions of “Blue Christmas” and the Pretenders’ “2000 Miles”, will be released on Friday, 2 November via Six Shooter Records. But the Whitehorse power couple are presenting a sneak preview today at PopMatters by premiering the entire album.

While listening to A Whitehorse Winter Classic, find out more about the making of the record, the Juno Award-winning pair’s holiday traditions and who’s been naughty or nice this year.

The songs were written after the 2017 Christmas season, “so we just stayed in that holiday headspace,” said McClelland, responding with Doucet to a series of email questions for this article. “Every year we tossed around the idea of writing and recording a holiday song, but we never actually got to work. The beginning of 2018 was particularly quiet for us, so we decided to give it a shot. We couldn’t stop writing and before we knew it, we had a whole album on our hands.”

Doucet, the dazzling guitarist from Canada who has been married to the Chicago-born McClelland for 12 years (they have a four-year-old son named Jimi), found many reasons to make their first holiday album.

“If we find Christmas music generally awful, it is incumbent on us to make it better,” he said. “Also, there are things about the season that, despite one’s objection to profligate consumerism or the fantasy of religion, are worth celebrating. Family, children (and the wonder and awe of children’s fantasy), surviving the Canadian winter, managing loneliness, romance, eating and drinking … there’s lots to unpack in these themes.”

Doucet, who produced the album made at Revolution Recording in Toronto periodically from the winter through the summer, said the key to delivering a winter classic is, “Seeing the beauty and wonder in the eyes of children. … Also, choirs and string quartets are a must.” 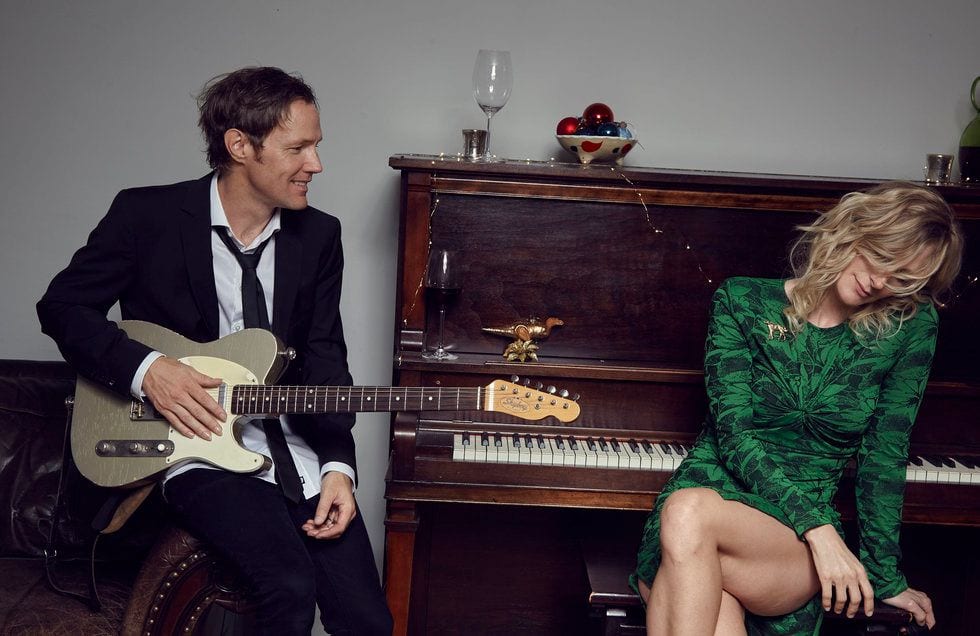 Violins, viola and cello are certainly there, and the Mississauga Children’s Choir does a masterful job on “December’s Children,” McClelland’s personal favorite. “Luke really found a melody that captures that bittersweet feeling that can sometimes resonate around the holidays,” she said. “His lyrics lift it up from this place with hopefulness and warmth. ‘Snowballs and Snow Angels’ is another favorite. It’s a picture of a snowy, drunken night where we try to hold onto that elusive love that still seems to be everywhere and nowhere. I aimed for a classic melody to emphasize a timelessness.”

Doucet also has a strong feeling about both songs, saying, “I think people will gravitate towards [them],” while believing the two might be remembered year after year.

” ‘Cheers to Another New Year’ is a slow burn and a bit weighty but might speak to the lonely hearts club,” he added. ” ‘Merry Xmas, Baby (I Hope You Get What You Deserve)’ is acerbic and pissy. Melissa always does that well.”

All the ingredients to a Winter Classic are undoubtedly there, but it wasn’t like preparing a scrumptious holiday feast, according to McClelland, whose angelic voice is a gift that keeps on giving.

“We definitely didn’t have a recipe for this record!” she offered. “I think the holidays evoke a lot of potent emotions, from good to not so good, and my favorite, the ever confusing and wonderful feeling of nostalgia. We didn’t just gravitate to the season cheer on this record. We wanted to tap into all the emotions and feelings we often succumb to over the holidays. Not sure if this is how you make a winter classic, but it felt right to us.”

These sounds of the season just made this a November (and December) to remember. 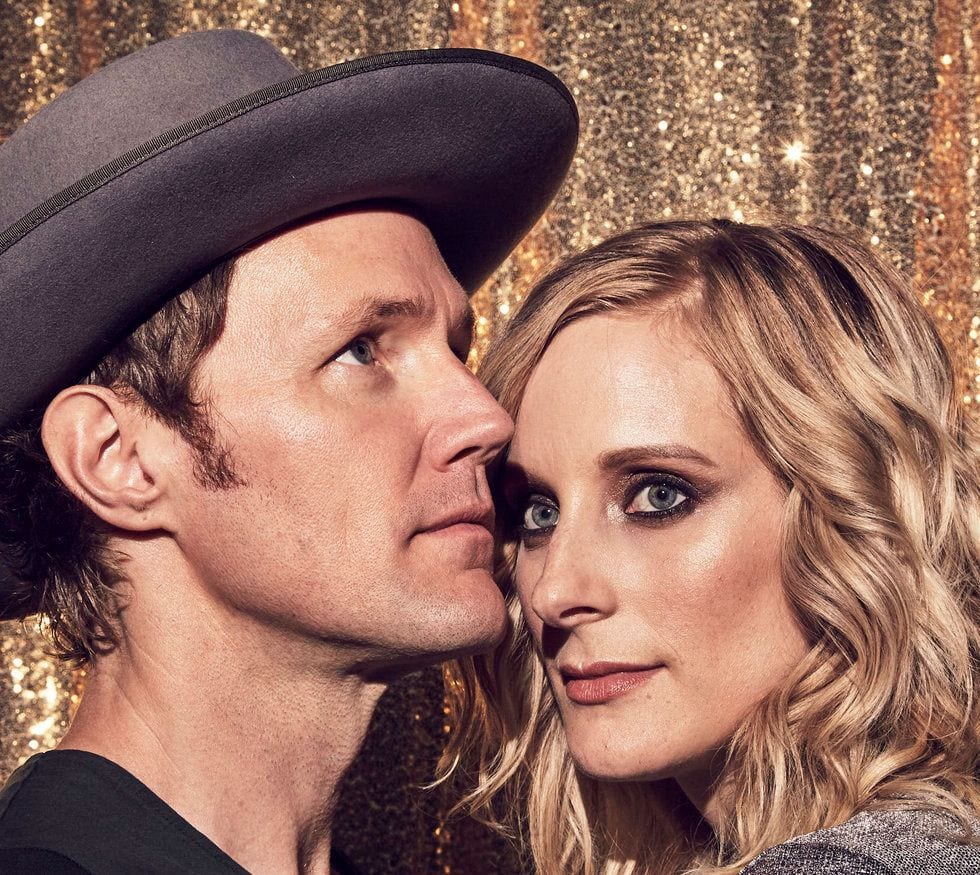 Luke Doucet and Melissa McClelland got into the holiday spirit to answer a few more questions and express their feelings about the Christmas season. 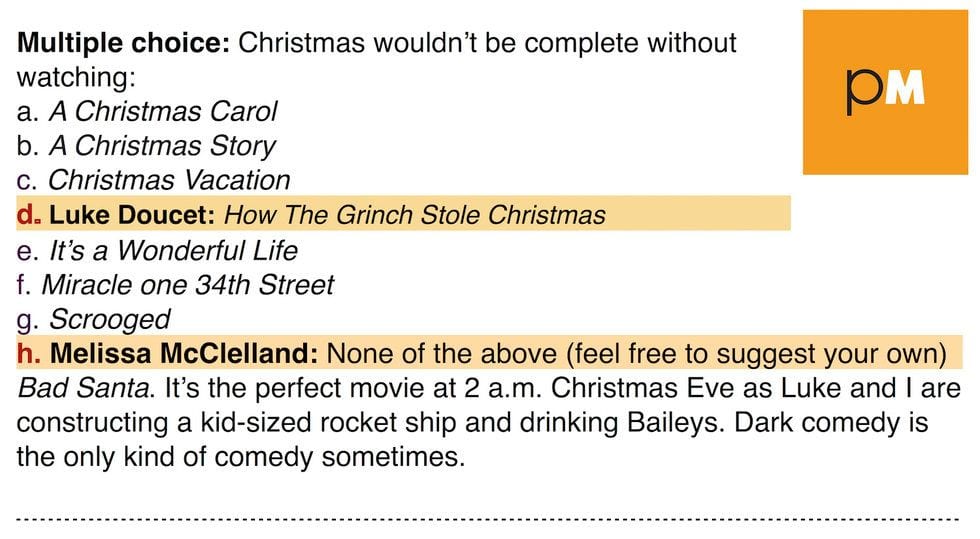 How has the birth of your son Jimi changed your feelings about the holidays?

LD: I’m less prone to cynicism and impatience with the religiosity and consumerism when seeing Christmas through the eyes of children. The lights, colors, family, food and even gift giving are sources of joy for children. I think it is possible to enjoy these things with children without promoting profligate consumerism and religious superstition.

MM: The holiday spirit has been completely reignited for me ever since we had Jimi. Making the holidays as wondrous as possible for him is a beautiful and fun challenge for us. Homemade ornaments for the tree, cookies for Santa, singing “Silent Night” as I rock him to sleep … I love every minute.

What’s your favorite holiday (and why)?

MM: Probably Christmas. I loathe winter and the endless cold weather. By December, I am completely ready to be distracted with mulled wine and family visits.

How and where will you spend the holidays this year?

LD: We will be in Winnipeg, close to my mother and my family. We are a large clan and Jimi has cousins to celebrate with. Also, Winnipeg does winter like few other places, with Assiniboine Park, the Forks and skating on the rivers being some of the best outdoor destinations in an admittedly frozen city.

What’s on the Christmas Day menu and who does the cooking?

LD: We will all contribute to Christmas dinner but the menu is fairly traditional, based on what my mother has been preparing for almost 50 years. Highlights include the flambé plum pudding, which Jimi will get to light this year. The ladle full of brandy lights a deep cobalt flame. He knows he has to be brave.

MM: My mom always makes Scandinavian Kringlers and now my sister has taken on that task. Luke makes homemade Baileys from his mom’s recipe. I happily consume.

LD: Cookies and milk for “Santa” and the inevitable conversations around Santa (“is he real, papa?”…”What do you think, Jimi?”).

MM: I’d say it’s now taking Jimi and his cousin Evander to get photos with Santa. They’re 5 weeks apart and we have an excellent collection of the two of them with Santa.

What holiday tradition can you live without?

LD: Exchanging gifts between adults is nice when spontaneous or at birthdays but I don’t have much interest in celebrating a religious holiday with gifts. I’m not interested in the religious component at all and adding the pressure of gifts to the mix is not helpful to me.

MM: The shopping and consumerism.

What makes you feel like saying “Bah Humbug!” instead of “Merry Christmas!” during the holiday season?

MM: Being in a mall.

Have you been naughty or nice (or both) this year?

LD: A successful life is a balance between naughty and nice. I encourage all the people in my life to indulge in both.

Fill in the blank by completing this sentence: Santa Claus is coming to town.

LD: For the same reason that children love Star Wars, Paw Patrol and Harry Potter, they love Santa Claus. There’s no need to believe any of it is real for it to be a source of wonder, awe and celebration.