There’s an old saying; “Never let perfection interfere with success.” Widows, the new crime caper from director Steve McQueen and based on the novel by Lynda La Plante (Zaffre Books, 2018) Widows may induce flashbacks to Michael Mann’s 1995 masterpiece Heat as it starts by delicately blending the introductions of ten characters. McQueen (12 Years a Slave, 2013, Shame, 2011) takes us through the lead-up to a heist gone horribly wrong, bouncing back and forth in time to juxtapose the domestic tranquility of our heroines with the violent deaths of their thieving husbands.

Even if you’re unfamiliar with the film’s premise, you sense that these insulated wives will have to pay for enjoying the spoils of their husbands’ misdeeds.nearly collapses beneath the weight of unnecessary twists and gaping plot holes, yet still manages to be thoroughly entertaining. Terrific performances by Viola Davis and Elizabeth Debicki, along with breakneck pacing and unbearable tension, will have you feeling good for these bad-ass ladies.

Ultra-suave thief Harry Rawlings (Liam Neeson) canoodles in bed with his wife Veronica (Viola Davis) before meeting up with his crew for their final job. He dominates the world around him, as evidenced by his posh uptown apartment and Veronica’s servitude, even pouring him a shot of whiskey from his prized silver flask as he luxuriates in the shower. In every other Hollywood heist movie, Harry would be the lead character and these would be the boring domestic scenes before the real action started. Instead, this scene provides the backdrop to Veronica’s life. The movie is called Widows, not Widowers, after all.

Before Harry’s body has even stopped steaming from the explosion that kills him and his crew, his enemies are making inquiries with Veronica. It seems that Harry’s last job involved stealing $2 million from the campaign coffers of Jamal Manning (Brian Tyree Henry). Jamal is running for Alderman of Chicago’s 18th Ward against political heavyweight Jack Mulligan (Colin Farrell) and $2 million can buy a lot of votes. With the election only days away, Jamal sends his sadistic little brother Jatemme (Daniel Kaluuya) to find the money through less-than-civilized means.

And so we have our premise: Veronica has two weeks to raise Manning’s money or her legs (and God knows what else) won’t work so good anymore. After finding a notebook detailing Harry’s next job, Veronica enlists the help of the crew’s widows to pull off a heist that can settle their husbands’ debts. Okay, it’s a highly unlikely scenario, but Davis’s smoldering intensity could convince the Pope to rob a lemonade stand.

Had McQueen trusted his premise, he might have parlayed this perfect set-up into a genre transcending character piece about a group of women (re)discovering their self-worth. Unfortunately, he piles on so many complications and twists that they not only undermine most of the set-up, but derail the most interesting elements of the story, as well. It’s a clear example of sacrificing substance in favor of broader popular appeal. There’s nothing inherently wrong with that, of course, but it’s frustrating to see a movie settle for being just entertaining when it could have been so much more.

McQueen subverts the conventions of heist films with Widows, but in disappointing ways. Half the fun of a heist caper is meticulously setting up the plan, only to have it fall through at the moment of truth. Here, we have no clue what the plan is. There are no schematics, no elaborate diagrams, or even a few cheeky montages to show their final preparations.

In fact, there are only a couple of scenes setting up the heist, including a forgettable trip by Veronica to distract their mark while her crew maps out his surveillance grid. Slightly more successful is the crew’s playful attempt to simulate the massive weight of their ill-gotten booty with plastic containers full of dirt doubling for bundles of cash. It’s an ingenious way to connect the widows’ previous lives of domestic tranquility to their unlikely descent into crime. 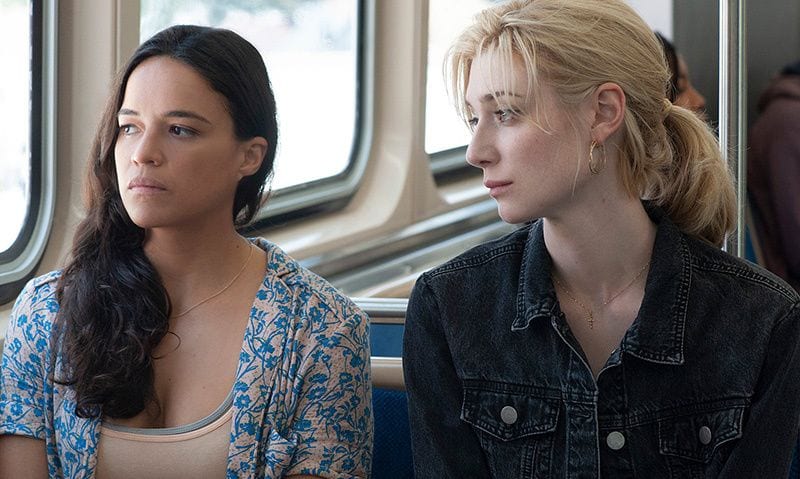 This leads us to the film’s major flaw: the lack of character detailing with the other widows. It’s true that Debicki is stunning as Alice, a self-loathing trophy wife who relies upon men for her very existence. She’s the type of women who apologizes when a man slaps her for ‘mouthing off’. In many ways, Alice is the true heart of Widows. Powered by Davis’ commanding performance, we never doubt that Veronica will find a way to survive. Alice, however, must call upon hidden reserves, discovering her personal strength as the story progresses.

Beyond Alice’s story, there’s nothing interesting happening in this crew. Rodriquez is completely wasted, and Erivo is little more than an afterthought as the crew’s getaway driver. Ironically, McQueen abandons his feminist themes in favor of spending time with the boys; a seemingly endless array of bad guys and political slimeballs. Robert Duvall even pops up as Mulligan’s bigoted father, in a role so transparently ugly it feels completely out of place.

What McQueen gets right, and what ultimate makes Widows worth seeing, is uncanny pacing and agonizing tension. Relentless and brutal, Widows can match the urgency of any macho-laced Hollywood thriller. Bones are broken and blood is spilled as McQueen convincingly establishes that failure for Veronica’s crew will mean certain death. Even after a late twist completely undermines the villains he so carefully crafted, McQueen again distracts us with action to distract from how flimsy the plot has become.

Davis rocks the house. She isn’t given many quiet moments to show her dramatic range, but she carries the entire film with her steely resolve. Even though these widows have absolutely no reason to join her scheme (Veronica is the only widow overtly threatened by Manning and theres no evidence to suggest he even knows they exist), they are powerless to resist her spell. Simply, without Davis, this movie doesn’t work.

Yet, work it does. Widows, which airs in the US tomorrow, Friday, 16 November, is a shameless crowd pleaser with just enough smarts to elevate it a bit above the ranks of mere guilty pleasure. The exhilaration of watching these ladies reclaim their mojo will send everyone out of the theater happy. Just don’t think too much about the plot on your way home. 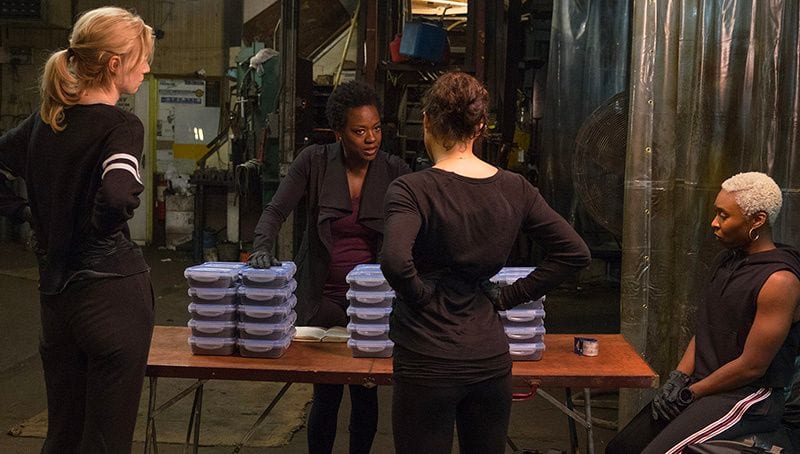