A heist film is, at first glance, both surprising and unsurprising territory for the director Steve McQueen, who’s made a movie career mining desperation and violence for harrowing drama. On-screen heists have been famously decorated with comic flourishes — much of Steven Soderbergh’s mainstream popularity stems from his Ocean’s Eleven franchise, and Reservoir Dogs, equally laden with gimmicks and graphic violence, kicked off one of the most influential careers in contemporary cinema. Soderbergh and Tarantino have both had wide-reaching careers, but neither would have made it as far without a fierce self-awareness and humor.

This isn’t to say that, with Widows, McQueen has foregone drama for some sort of light romp. As a chronicler of physical and psychological agony — starvation in Hunger, addiction in Shame, captivity and torture in 12 Years a Slave — his old habits die hard. His latest feature takes a trip through genre territory, sure, but not by sacrificing the anguish central to his career so far. Based on a British TV series of the same name, the film follows four women whose husbands have been killed in the process of pulling off a heist. Veronica Rawlings (Viola Davis) is the central figure because her husband Harry (Liam Neeson) was the original heist’s ringleader and because Harry’s criminal foes are now after her, intent on getting their money.

Rounding out the group are Alice (Elizabeth Debicki), a beautiful young woman whose husband beat her, Linda (Michelle Rodriguez), a store owner whose husband gambled away her business and Amanda (Carrie Coon), who stays out of the mix to care for her newborn child. Later, Linda’s babysitter Belle (Cynthia Erivo) comes on as the group’s driver, happy to make some extra money for her family. These women, five in total, are just the beginning.

The villains demanding payment are Jamal and Jatemme Manning (Brian Tyree Henry and Daniel Kaluuya), brothers who terrorize their enemies and who are quick to get violent when necessary. (Apparently, it’s almost always necessary.) But Jamal, as a stride toward power and autonomy, is also running for alderman of a South Side precinct against Jack Mulligan (Colin Farrell), a spoiled kid turned dynasty politician. The political backdrop of Chicago, where the streets are grimy and forlorn on one corner and pristine on the next, provides Widows with greater depth and acts as a driving force for both the film’s heroes and villains. To be fair, it’s not always clear who’s who.

Above all else, there’s no mistaking McQueen’s foray into genre as a loss of ambition. Written with Gillian Flynn, the author of Gone Girl, the script here is twisty and fun, but not without the traumas innate to McQueen’s previous work. Position all of that around a talented ensemble cast and you’ve got a formidable undertaking. The result is striking, but not roundly successful in all corners; Mulligan’s narrative as the morally corrupt but well-intentioned politician is great fodder for drama (although maybe the Irishman should avoid thick accents moving forward), but likely would have fared better in a film of its own and, similarly, the second act addition of Belle lets Erivo show off her magnetic talent, but not as thoroughly as the actress deserves (though her scene-stealing turn here should hopefully lead to more film projects moving forward).

But Widows‘ successes definitely outweigh its weaknesses. Ensemble films can’t offer as much depth as, say, a TV drama, and so it’s worth celebrating the characters and storylines here that do fully resonate. It should surprise no one that Davis is captivating as the sodden Veronica Rawlings, which is all the more noteworthy given everything she’s called on to represent. The film’s quartet of abused, downtrodden women is empowering in the heist’s execution — Linda and Belle find the money to finance their businesses, and Alice finds strength and autonomy — but Veronica’s role is always a step more complex than anyone else’s. The fact that she’s a rich black woman, left behind in the gorgeous penthouse she shared with her white husband, is never lost on McQueen. Nor is the fact that segregated Chicago, illustrated by Mulligan’s fight to retain a predominantly black ward, is unfriendly in all corners to a woman who stands outside the categories designated for her.

Beset by an abusive mother and husband, Alice is also given fertile ground for personal transformation. Debicki, whose lanky, ethereal beauty expertly conceals Alice’s inner strength, is easily the breakout star of the film, and it’s her ability to jump from ineffectual to resourceful that best ties the film’s tragedy and light comedy. Rodriguez and Coon don’t fare as well, because neither are given as strong of a reason to exist within the narrative, but in any case, their presence helps along the film’s focus on feminine perspectives. Jamal, Jatemme, Mulligan and Mulligan’s father (Robert Duvall in the inevitably shouty Robert Duvall role) are by contrast short-tempered, ego-driven and bigoted, intent not only on holding on to their power but on accumulating more. Even Harry, seemingly a good man gone too soon, more than fulfills his quota of masculine neglect and disappointment.

None of this is possible, though, at least not in its current form, without McQueen’s precise direction and cinematographer Sean Bobbitt‘s focused lens. Widows is breathtaking in its visual scope — there’s the glaring whites of the Rawlings’ penthouse, the shadowy dark blues of the women’s meeting place and the marked mixture of light and dark skin — and both the drama and comedy are better for it. For a man whose first career was as a visual artist, such mastery is unsurprising in theory, but in execution it remains something to behold. McQueen’s latest may not be as singular a success as his previous efforts, but what it manages to do with its tremendously ambitious vision is to create a brilliantly imperfect heist drama. Who knew that one of film’s greatest arbiters of misery also had a fun side? 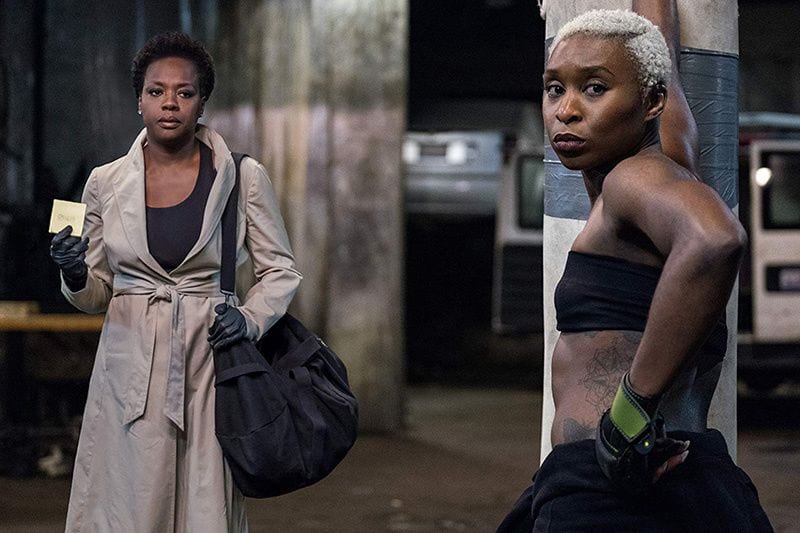