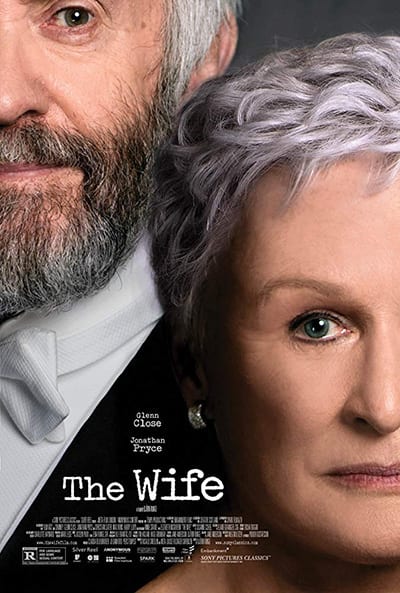 I wanted Björn Runge’s The Wife to be a good movie. I wanted to bask in Glenn Close embodying that simmering, curdling rage I see reflected and refracted around me at an ever-growing fever pitch; I wanted to find some catharsis in a movie about a woman who has sacrificed everything for her husband because the world would otherwise never see her value.

Yet despite the confoundingly warm reception and exaggerated Oscar buzz for Close’s performance as an archetype that many women can undoubtedly relate to, The Wife fails on nearly every level as a movie. Bogged down by numerous overly broad performances, a plot so formulaic it might as well as been calcified, a maudlin score, and a total lack of visual sensibility or style, The Wife is not the story that the collective (American) female frustration and fury of 2018 deserves in the least.

Based on a novel by Meg Wolitzer (Scribner, 2003), Runge’s The Wife starts with a strong, zeitgeist premise and proceeds to devolve in quality almost immediately. Joe Castleman (Jonathan Pryce) is a lauded, volatile author waiting for that call from the Nobel Prize committee at an obscenely early hour; Joan Castleman (Close) is his impossibly unflappable, capable wife who immediately gets on the line when the call comes from Sweden: he’s won the 1992 Nobel Prize for Literature. Of course, Joe can only humbly shower praise on Joan, his better half, the woman who makes it possible for him to write such incredible novels by attending to his every need. (In the first 15 or so minutes of The Wife, Joan reminds him about his heart condition and about his doctor’s orders to stretch his legs, carries his coats, makes sure he has no crumbs in his beard, and even lies in their bed to provide him a sexual outlet when he’s stressed about the phone call.) 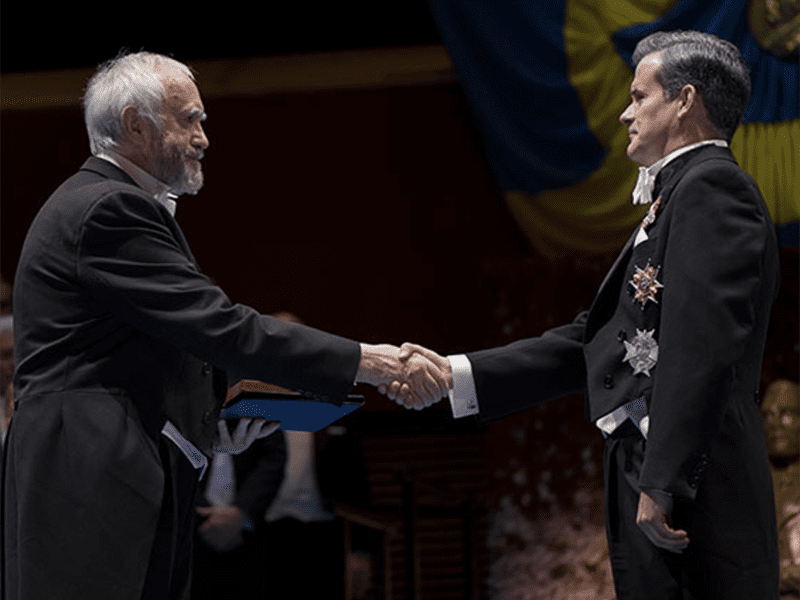 They go to Stockholm to receive his award, their resentful aspiring-writer son David (Max Irons) in tow, trailed by Nathaniel (Christian Slater), a pesky reporter writing an (unauthorized) biography of the great Joe Castleman. But despite the facade of a perfect marriage between king and “kingmaker”, as Joan calls herself, naturally, all is not what it seems, and Joan’s saintlike patience and care naturally unravels as the movie toggles back and forth from 1992 to flashbacks of young Joan (Annie Starke) taking a writing class at Smith College from young Joe (Harry Lloyd).

Joe claims publicly that Joan is not a writer, but their shared history, as we come to learn, is based on them both being aspiring writers, with the married Joe seducing Joan in part by praising her writing. As Joan fends off Nathaniel’s impertinent questions about her former life as a writer, a student whose skill surpassed her teacher’s in nearly every way, flashbacks of Joe’s early literary travails confirm what we suspected all along: that Joan is not only the more talented writer, she’s actually Joe Castleman’s ghostwriter, and the Nobel that he’s accepting on that stage should rightly be hers. Eventually, Joan gets Mad As Hell And Can’t Take It Anymore, leading to a blow-out fight in their hotel suite, wherein The Wife succumbs further to cliché and Joe has that heart attack that’s been clumsily foreshadowed since the beginning.

I haven’t read the novel upon which this movie is based. Wolitzer is an acclaimed writer, and I simply can’t believe that this movie captures the complexity that surely must exist between the pages of her book. The film version of The Wife is frustrating because there were so many ways to make this movie better, richer, more complex and less clichéd even as it’s telling a story you can telegraph from the first scene onward. We’re naturally meant to sympathize with Joan, and there are moments when the camerawork does that for us, in case we forgot what the movie is called: it focuses on her face, even when that means partially cutting off the person who’s talking next to her, reducing the action to the margins. But as the story unfolds, what initially seems like an obvious, but understandable filming choice to get us to identify with Joan ultimately makes it clear that the camera is just sitting there, because there’s no thought in how the rest of the movie’s shots are composed.

At one point, for example, Joe castigates Joan for being out in Stockholm at night, because the sun sets in the afternoon in December, but the direction and cinematography fails to capitalize on what could have been an excuse for dramatic, beautiful, painterly lighting inside their hotel suite to set the mood. Instead, all of the action that takes place inside is lit with that uniform white lighting that makes The Wife look like a television show from the mid-’00s. The movie’s wider shots are often filmed with an excessively shaky camera (about a quarter of the movie looks as though I was watching it on a motion-smoothing screen), while in other shots, the camera starts up relatively close and just pulls back at a snail’s pace for no reason at all. There are also no stylistic differences between the main action in 1992 and the ’60s flashbacks that show us how Joe and Joan got together, which, frankly, is a waste of imagination. (Aside from people smoking indoors and a reference to Bill Clinton, there’s also not much to show that the story takes place in the 90’s—neither the costuming nor the hair and makeup nor the interior decoration reflect any ’90s or even late ’80s styles.) 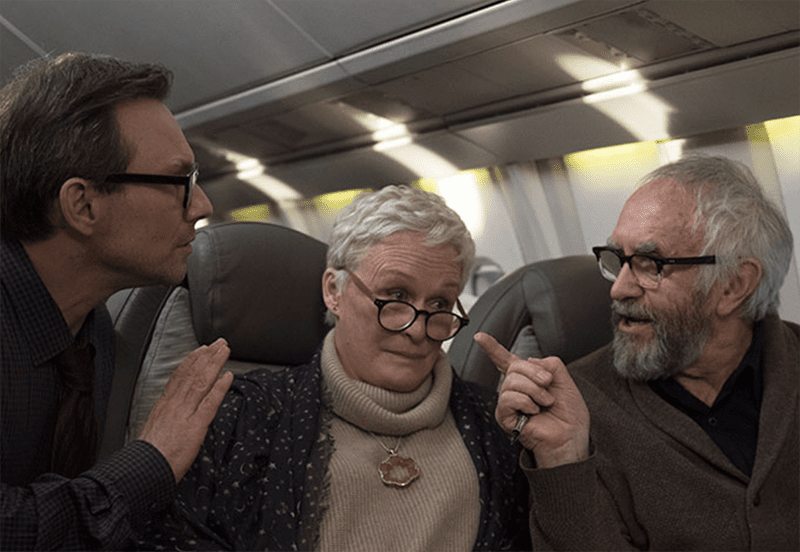 Handled with subtlety, The Wife could have been about that suppressed rage manifesting itself as attentiveness. It’s what many reviews of this movie are highlighting, but I frankly didn’t see much suppression. As soon as the Castlemans get to Stockholm, Joan’s annoyance becomes pretty obvious to the extent that even Joe asks her if she’s feeling all right. Joan and Joe yell at one another more than once in this movie—not exactly an eloquent display of Joan swallowing endless misery and resentment. Close is far too good for this movie, where every plot twist is practically announced with a neon sign; I was half-expecting Joe’s inevitable heart attack to happen on stage during his acceptance of the medal. David’s whiny attitude is hard to watch, with Irons looking like a sulky puppy during most of his screen time. But his meltdown — once he learns that Joan is the ghostwriter — raises the level of histrionics to hard-to-watch levels. Slater, at least, acquits himself better, playing a breezy journalist who’s refreshingly open about his less-than-honorable intentions with regards to his book on Joe.

But there are moments of slyness in Joe’s very public appreciation of his wife where we aren’t sure if Joe is merely acting the part or has convinced himself that he is a good husband: he consistently praises her in public (even when she asks him not to), gives her a foot massage in the car, does all the right things that a magnanimous husband should do for the wife who keeps the lights on. While it’s not well expressed or signaled in The Wife, an argument could be made that what we see of young Joe and Joan in the flashbacks makes it clear that he was, on some level, looking for a Better Wife in the adoring girls in his writing class—a wife who could make him more than a professor, but the Great Writer he clearly believed he was meant to be.

During Nathaniel’s conversation with Joan in a smoky bar, Nathaniel reveals that he’s gotten in touch with Joe’s first wife, Carol, who has since taken on a career of her own since Joe left her; apparently, Carol wanted to thank Joan for taking Joe off her hands. Joe needed a wife whom he could convince needed him more, a wife who would subsume her needs completely to take care of his, and he found it in Joan who, in the face of the sexism of the ’60s publishing establishment, realized that the only way to get her words read was to say they were his.

If, as he claims in the climax of their fight, Joe remembers their relationship differently than Joan, then there were ample opportunities for the filmmaking to reflect that—the flashbacks, say, could have been played with to show us the same pivotal events from Joan’s and Joe’s points of view, instead of the stolid, didactic approach that tells us What Clearly Happened, making Joe look irredeemably greedy and selfish. Pryce’s acting doesn’t leave much room for ambiguity, and neither does Harry Lloyd as young Joe, where it’s made clear that Joe was unable to handle Joan’s critique of his work, that he felt so cowed by her superior skill that he threatened to leave her, that he then used her desperation to keep him as a way to make her his ghostwriter. (A few throwaway lines about Joe being Jewish and Joan being a WASP must be an indication of a plotline that didn’t get adapted from the book in full.) Because we’ve been in Joan’s corner from the beginning, Joe’s eventual blame of his infidelities on her talent as a writer limits his character’s complexity.

I wanted The Wife to be a good movie. But if you want a better — and cathartic — movie about a woman writer with rage that is suppressed and compressed to a toxic lump of coal inside the chest until it has no choice but to explode, I’d recommend Wash Westmoreland’s latest, Colette.