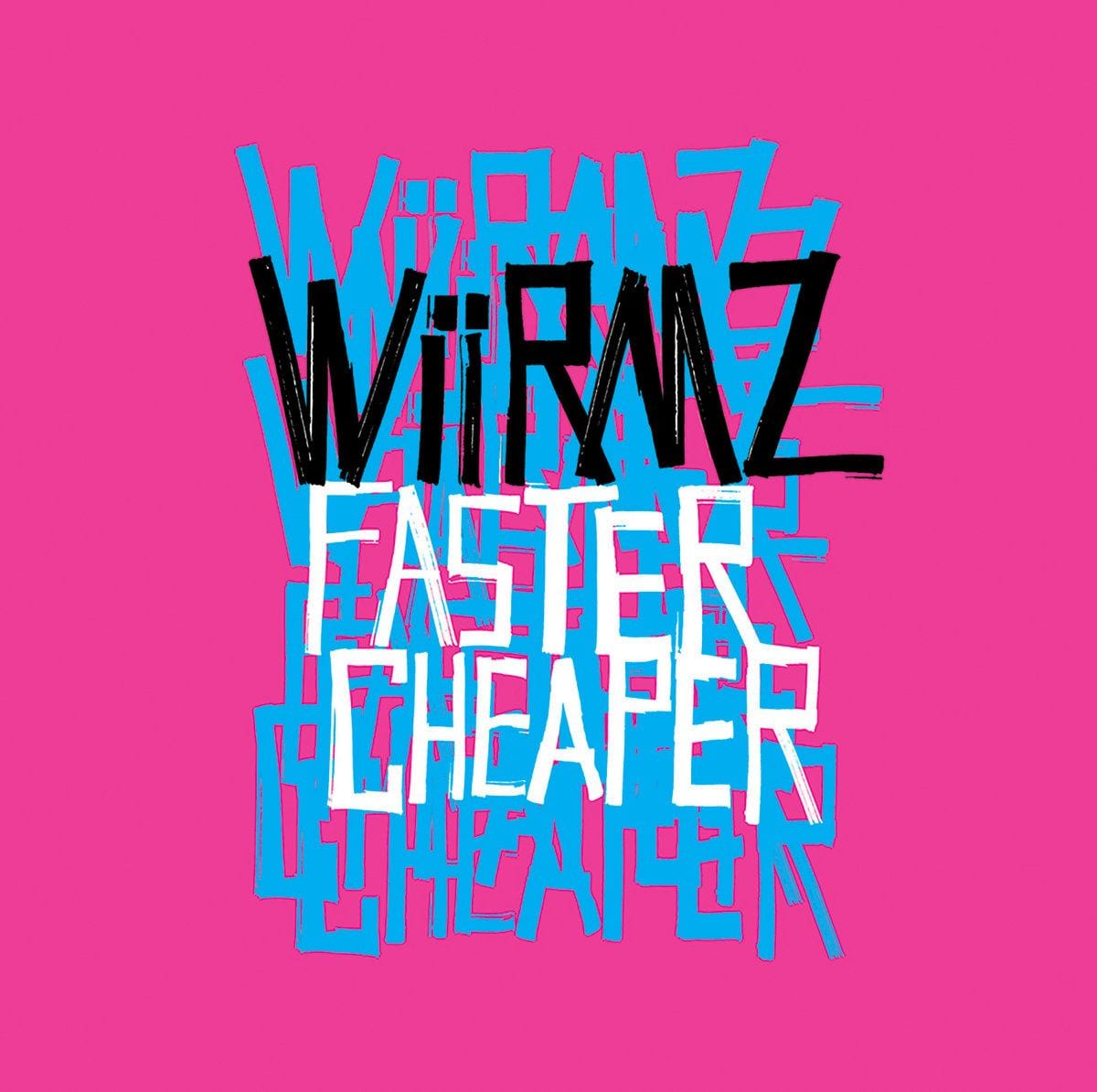 The joyfully bombastic quartet WiiRMZ hail from the same city that defined (and arguably invented) post-rock in the 1990s with bands such as Slint and Rodan. And they also come from the state that gave America two well-known right-wing windbags: Senate Majority Leader Mitch McConnell and Tea Party-backed Governor Matt Bevin. But on their sometimes-too-good-to-be-true debut LP, Faster Cheaper, WiiRMZ is less concerned with acknowledging the inheritance of the former than attacking the stances and societal “norms” established by the latter. “The concept of this band is exposing the brain worms that seem to have infested our political system,” member Brad White said in a recent interview with 91.9 WFPK.

WiiRMZ, if the pitch-perfect and vitriolic opening anthem “Don’t Panic” is any indication, are most definitely onto something. They might be offering the most acidic form of punk political commentary in Louisville. It’s just tough to tell because it’s hard to hear anything beyond the bombast. This thing is best played at 11. What it lacks in vocal precision, it more than makes up for with its venom. The eight songs on Faster Cheaper are like a good sock to the jaw, bone-rattling, and disorienting in their potency. It doesn’t matter what they’re screaming – because they’re doing in the wonderfully emotive punk tradition.

And the band, though they feature alums from Louisville acts Metroshifter and Sunspring, owe very little to the city they call home. (Sorry, Scott Richter.) Yes, WiiRMZ taps into the 1980s hardcore that defined the Kentucky river-town before the likes of David Grubbs, Will Oldham, and Jason Noble showed up on the scene – particularly Your Food. But they are also singularly their own beast, offering raw-nerve Fun House-style punk cut with a distinctive undercurrent of 1980s strut and swagger. Need more context? Well, imagine a high-octane Pere Ubu fronted by a jacked-up Timmy Taylor serving listeners its take on Wire’s Pink Flag, and you’ll get an idea of what I mean.

But, just when you think you’ve got the whole record pegged and defined down to a T, it throws you a curveball – and some much-needed shade. “Hard Money”, though it might be defined best by its sludgy chorus, actually hints at the pressurized bass/guitar dynamics of Rodan or Shipping News, two Noble-backed Louisville staples. And the title track, with its lazy-funk-guitar intro, could be a good road-map for Pittsburgh-based Sub Poppers the Gotobeds to follow on their next full-length player. It doesn’t stomp so much as swing, despite the 4/4 march of the rhythm section.

The wonderfully titled “Rat Fuck” cops blues-rock, though not the sappy SRV-cover-band variety. “No More of That” avoids balladry (the first few bars scared me there, kiddos) for a full-throttled Ramones punk roar. The chorus, with its sing-along refrain of “No no, no no, no / No more of that”, is an addictive little earworm. The record closes with “Warning Sign”, which starts with a blazing guitar line (again, hints of Wire) but makes the most out of 3:07 run time with grungy power chords.

It’s tough to say where WiiRMZ fit in the picture of contemporary underground punk. The quartet’s members are careful students of their noisy forebears and have developed a juicy fury at the system to match the underpinnings of the cultural moment. If only we could make those pronouncements against Trump and Russian Mitch more audible, this thing could be riot-starting. Yeah, it might or might not be the birth of a band you’re going to want to know. But, hell, all said, it’s a damn fine place to start.