Founded just over a decade ago, Toronto-based Koyama Press has quickly become home for some of the quirkiest and most inventively successful comics on the market. The Spring release of Michael Comeau’s Winter’s Cosmos is further evidence. This is the first graphic novel by Comeau I’ve read—and I suspect I’m missing a layered joke since “Michael Comeau” is also the name of a minor character in fellow Canadian cartoonist Bryan O’Malley’s Scott Pilgrim series. The meta effect is appropriate since Winter’s Cosmos is a Möbius Strip of self-reflective humor spoofing both science fiction and soft porn comics. Be warned, this article contains spoilers.

On its surface, the novel depicts two astronauts’ nine-year journey aboard the spaceship Sagitarii-Z to a distant planet in the Alpha Centauri constellation, which they will begin transforming with seeds from Earth to ready for eventual colonization. But even that brief summary is misleading, since plot is the least of Comeau’s concerns. Most of the graphic novel depicts the nominal captain’s attempts to stave off boredom: he threatens suicide, he sexually harasses his lone crewmate, he watches porn, he boxes with floating droids, he sexually harasses his lone crewmate, he plays billiards with floating droids, he watches inexplicable videos about self-surveillance, he sexually harasses his lone crewmate—who shows endless, Vulcan-like indifference to his sophomoric prurience while getting off on modern botany books and conducting obscure but apparently mission-related work in her laboratory.

But again even that mostly plotless plot summary is misleading—because characterization is not Comeau’s concern either. The astronauts—Captain Jonathan Gerald Hoffstan and Dr. Tracy Anabelle Nguyen—are intentionally two-dimensional caricatures. If Winter’s Cosmos is about anything, it’s two-dimensionality—but not in the metaphorical sense. The graphic novel would not survive translation into another medium, say film or TV or stage or even an animated cartoon, because it’s foremost about the paper that it’s printed on. 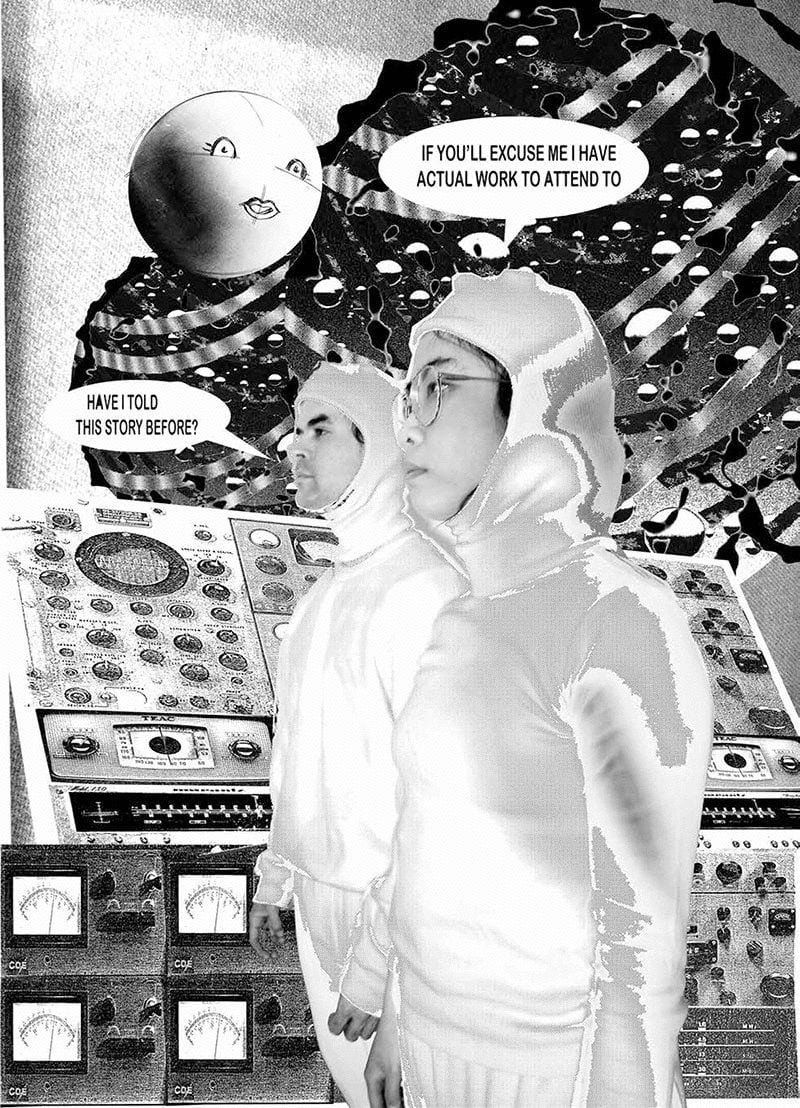 Comeau is dizzying visual artist who relishes the cheapness of his images. His primary artistic tool appears to be a photocopier. Page after page of Winter’s Cosmos feature black and white reproductions of photos, cut-out images, and collaged printouts, combined and recombined for effects that would easily find a home in Andrei Molotiu’s ground-breaking 2009 anthology Abstract Comics. Two actors receive film-like credit for portraying the astronauts because Comeau uses actual photographs of the two posed in makeshift space uniformsm which he pastes into computer-generated environments adorned with hand-drawn details. Their spaceship is a repeatedly reused stock photo of an ’80s-era, US space shuttle. Their equipment includes images of typewriters, telephones, and car engines that could have been torn from early 20th century catalogues.

The first sentence of the novel, “I’m gonna kill myself!”, appears in a talk balloon on page 12, but the four, preceding double-page spreads feature a slowly transforming spacescape of grainy stars and planets resized and duplicated into a thickening pattern of black and white abstraction. That opening sequence sets the artistic tone for the rest of the book, which, even as the captain and the doctor limp through their lurid distractions, is filled with endlessly inventive visual variations framing and reframing the nominal plot. Though a reader can flip quickly through the novel for its sex-driven meta banter, a slower perusal is rewarding. I’m reminded of Talking Heads singer David Byrne’s comment: “Singing is a trick to get people to listen to music for longer than they would ordinarily.” If the promise of sex jokes is enough to trick people into opening Winter’s Cosmos, then they’ve served their purpose.

But while one venture into the captain’s favorite episode of “Puta Futura” may be entertaining, a second and third are less so. Further, while Comeau’s star-crossed couple can be read as a critique of traditional gender stereotypes—the sexually frigid intellectual female, the childishly sex-obsessed male—they mostly serve for quick gags that say nothing about the actual subject of sexual harassment that they overtly address. Comeau serves his readers better when his characters literally fade from view, and he directs our attention to the photocopied honeycombs of the ship’s engines or the medley of cubes and concentric circles that layer his idiosyncratic imaginings of outer space. 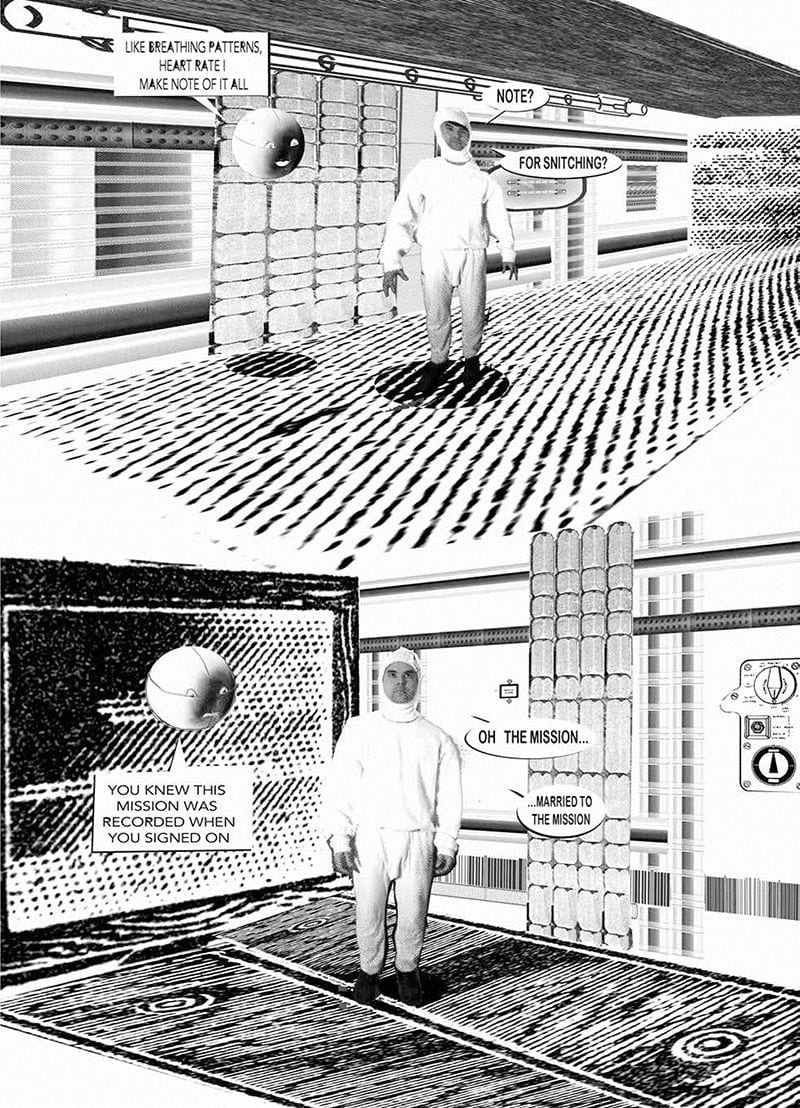 My favorite sequence is the novel’s last. After boredom has finally hobbled the captain’s brain, he believes he’s only in a simulator and opens an airlock and spaces himself and the doctor. The last 17, wordless, two-page spreads unite the estranged characters in an atom-like configuration as the ship’s droids twirl around them like electrons. At the story level, their bodies appear to travel through a black hole and plummet to the surface of their destination planet which erupts into slow-motion plant life, fulfilling their mission to “fertilize” a new home for Earth. At the graphic level, the sequence fulfills the promise of the briefer opening as well as two other wordless visual sequences of the space launch and a later narratively ambiguous depiction of the ship’s engines. These moments are Comeau’s most visually involving, loosely motivated by narrative need, but grounded fully in the playfulness of his anarchic artistry.

If Winter’s Cosmos is Comeau’s Alpha Centauri, I look forward to what fruits his new planets will bear next.