It turns out that a world without men won’t be completely different from a world with them. There will still be: ingrown nipple hair, flatulence, vomiting, crushes, nudity, unrequited love, deer sex, doctors, stool samples, traveling art shows, periods, pregnancy, gossip, artificial legs, mixed messages, break-ups, Paul Blart: Mall Cop, Oprah worship, monogamy, anxiety issues, and bananas. There will also be a few new things, like mayoral elections with only one, self-deprecating candidate and, unless you live in the capital, your village flag will likely feature a Beyoncé body part.

But a world with no men will involve some loss, too. There will be no more: shirts that button on the wrong side, dildo factories, Starbucks, race wars, Twinkies, “motorized chariots”, malls, and tooth whiteners. Also, still no Blockbusters. Oh, and no feminism—since feminism as defined as gender equality between men and women will go extinct with the passing of the last man. Even better, when you look at a sky filled with dozens of explicitly phallic-shaped clouds, you’ll only see the one that looks like a fish. And though art by male artists won’t disappear, when you look at a painting that used to foster “unrealistic standards” for feminine beauty, you’ll only notice the unrealistic heaps of fruit.

If this post-apocalyptic future doesn’t sound so bad, you need to get a copy of Aminder Dhaliwal‘s Woman World. The graphic novel is an expanded compilation of the Instagram series she began after the 2017 Women’s March. Dhaliwal told TheWebComicWhisperer.com last year:

“The march was so refreshing, exciting and supportive. Everyone (not just women) had a great time, I loved it. Soon after a couple different friends, and friends of friends posted their signs, t-shirts and banners from the march on social media, and we all watched an instant backlash from certain types of people online. The idea for Woman World came fairly soon after, I never wanted it to be preachy or forcing any sort of message. Just a cute, tongue-in-cheek feminist comic.” 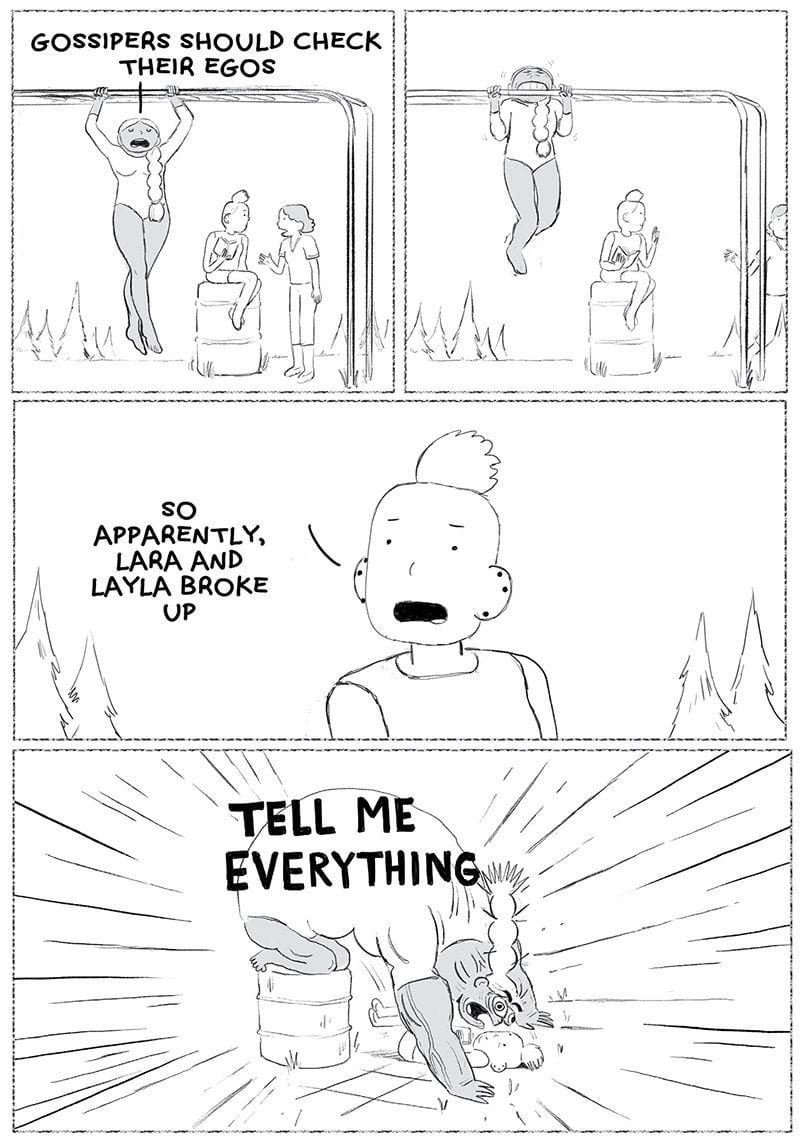 Dhaliwal’s self-description is as on target as the book itself. I rarely laugh out loud at comics, but Dhaliwal approaches her fantastical premise at unexpected angles, revealing humor in the collapse of some old assumptions—and the continuation of others. The page of cloud penises is funny, but also surprisingly though-provoking: If you don’t see penises all the time, then you don’t see penises all the time. That’s a smart insight for any reader, even one who, like me, has a penis. As Dhaliwal says, everyone (not just women) should have a great time.

Of course Woman World is a fantasy. While the notion of a genetic disorder that causes all female births is less far-fetched than many post-apocalyptic premises, a village peopled entirely by reliably caring friends and family is. The worst trait in Beyonce’s Thighs is over self-involvement when struggling through a difficult romance. So in the female future there is no crime, just the occasional foible. Dhaliwal isn’t pretending this is a realistic portrayal of humanity—or even one half of humanity. Woman World is just a humane comedy. 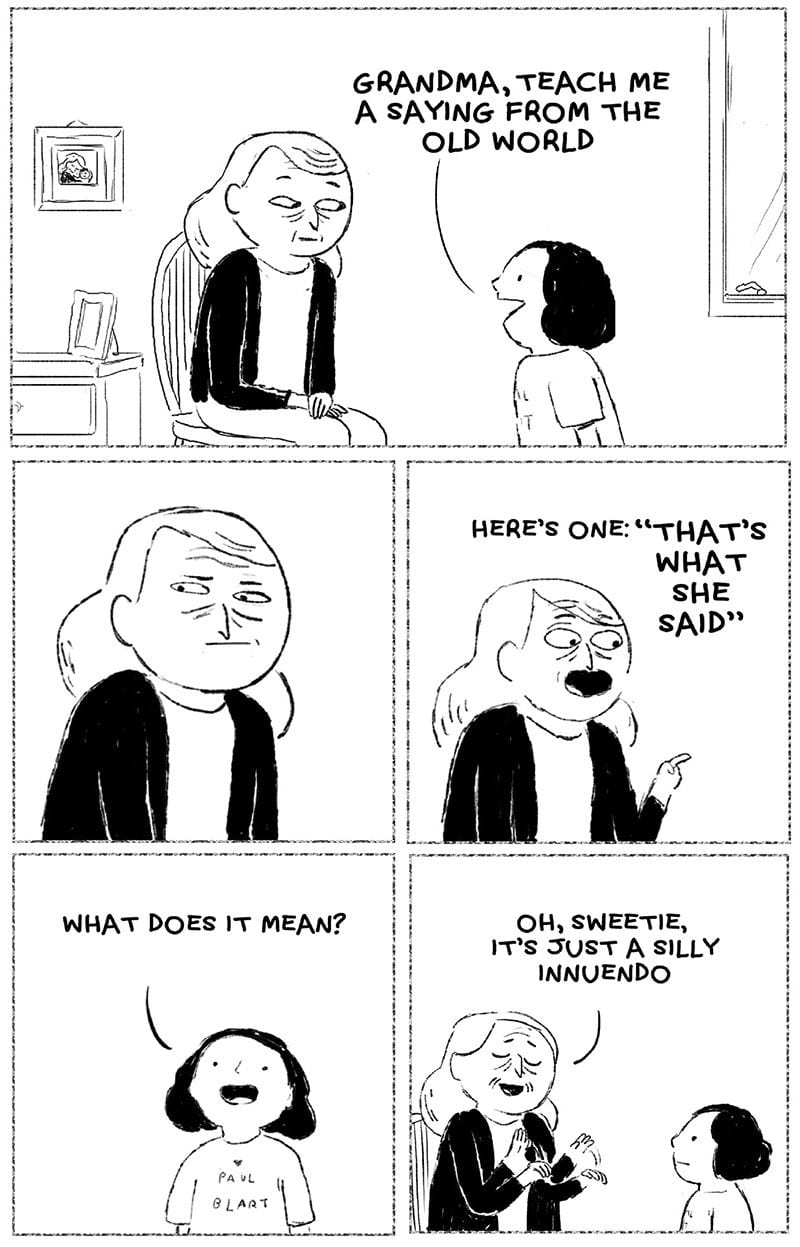 I also admire the comic as a comic. Dhaliwal’s cartooning is effectively sparse, capturing ten women with just a few, instantly defining pen strokes. Ulaana, the lone grandmother and chronicler of the old world, requires six extra lines: one under each eye, two on each side of her mouth. Yes, Ina’s and Gaia’s round heads are identical except for the curves of their hair—but that provides one of the book’s meta jokes. Dhaliwal also occasionally breaks her own norms—when, for example, she renders Lara striking her “the face” pose in full, three-dimension-evoking color.

The majority of the book is black on white comic strips, divided into discreet panels, usually variations of a 3×2 grid across two pages each—presumably taken directly from the Instagram run. But in terms of visual storytelling, I most admire the color, open-panel material that I assume Dhaliwal added for the print edition. The novel opens with 23 pages of world-building exposition—an approach I find disastrous in most science fiction, whether on paper or on screen. But Dhaliwal provides much more than a how-did-we-get-here intro for her comics strips. 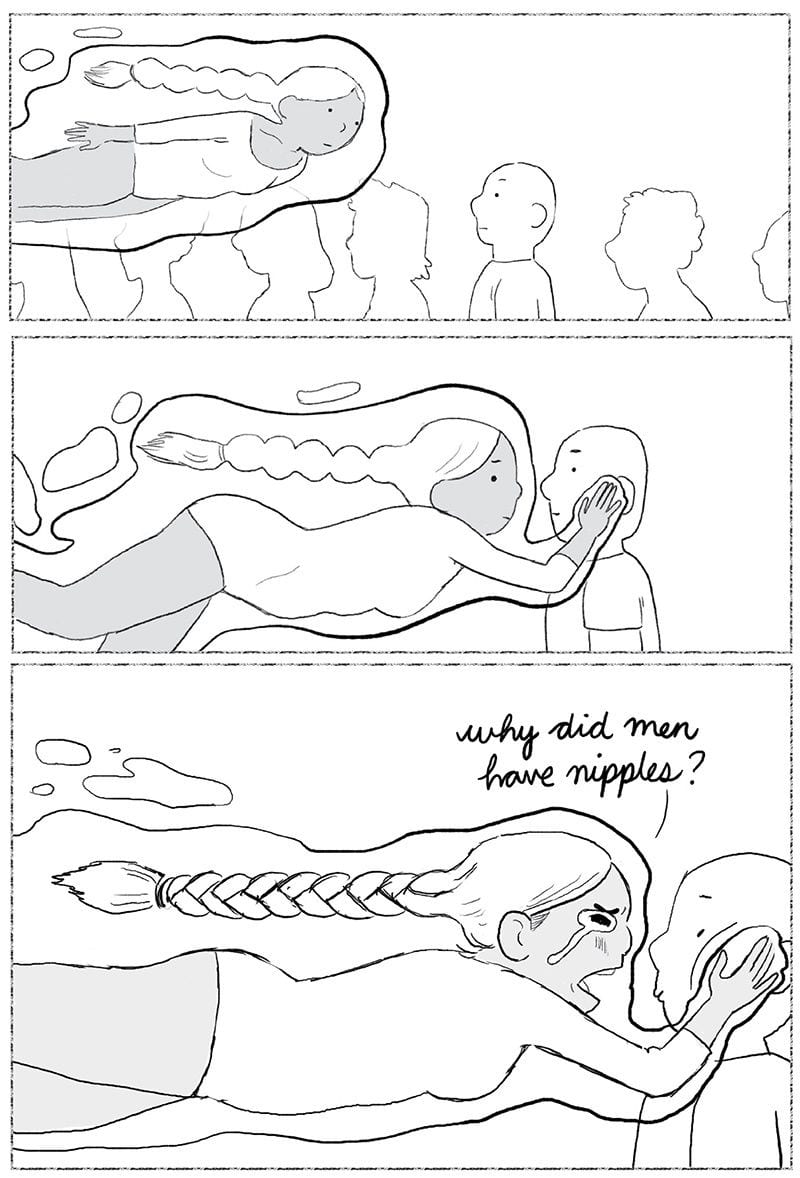 The opening sequence is the most visually dynamic of the book, incorporating full-page bleeds, embedded images, and word designs that playfully intersect with the story world. I do wonder, though, if the novel’s first character really had to be the male scientist who discovers the birth trend.

Dhaliwal includes eight similar pages at the end of the novel, providing a much-appreciated farewell for her charming cast of characters. Six pages of old world statuary in increasing, full-color collapse punctuate the chapters too. While the images are excellent, I wish Dhaliwal had expanded the approach since they feel buried in the 200-some pages of black and white strips. While there’s plenty of room for a sequel (the ending reference to a battle with giant arachnids is a great, tongue-in-cheek teaser), I suspect this will be our only visit to this not-so-dystopic future. I recommend you not miss it.