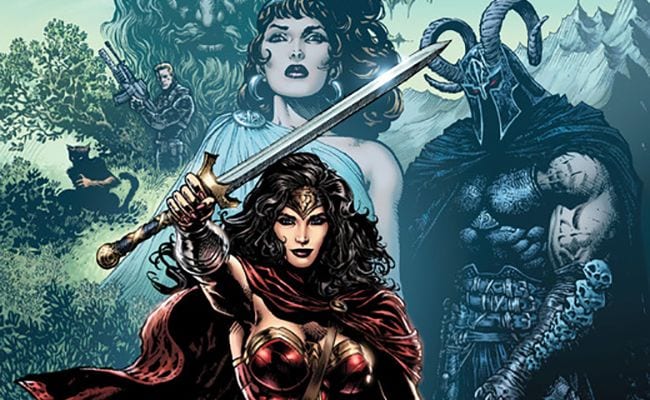 The strength of any ancient myth is measured by how well it conveys its themes. There’s a reason why certain myths transcend generations, cultures, and network cancellations. They reflect ideals and insights into the human condition. The stories may include colorful plots like gods knocking up mortal women, but the strength of that story is what separates timeless myths from boring reruns.

Wonder Woman’s entire persona is built around the themes of ancient myths. From her divine creation to her divine abilities to her divine insights into the affairs of man, she personifies the strength of every myth, regardless of who some playful god impregnates. She epitomizes the ideals of womanhood and the warrior spirit. The strength of her story transcends eras from the the communist paranoia of the ’50s to the hyper-masculine bravado of the ’80s.

Now, the events of DC Rebirth are poised to confuse and confound this story, adding uncertainty to the entire foundation of Wonder Woman’s mythos. Is she the daughter of Zeus? Is she molded from clay? Is she the rightful God of War? Is she destined to emasculate Steve Trevor at every turn? These are all questions that linger in the backdrop of Wonder Woman #1, but little is done to answer any of them. There aren’t even any telling hints, be they ominous teasers or divine impregnations.

Instead, Greg Rucka attempts to set up a new story and a new conflict with Wonder Woman. On paper, the concept has some merit. He even succeeds in fleshing out this concept to some degree, but that success is marginal at best. That’s not to say it fails, though. There is some intrigue at work within this narrative. It just leaves too many unanswered questions and too few reasons to get excited. The effect is undeniable. When Wonder Woman fighting mythical monsters fails to excite, then there’s definitely something missing.

The story itself basically starts in the middle of a conflict. Wonder Woman is on a journey, which is a common narrative in many classical myths. That journey puts her in an exotic locale that is much more colorful than the streets of Gotham or the skies of Metropolis. While the snarling beasts aren’t quite as memorable as homicidal clowns, it does reflect Wonder Woman’s mythical heritage and gives her a target for her mythical strength. Without any added context, however, it may as well be a typical Tuesday for Wonder Woman.

That’s not to say there aren’t other forces behind the scenes, providing context to Wonder Woman’s journey. Rucka actually introduces a key figure in Wonder Woman’s mythos that has been absent in recent years, namely Etta Candy. However, this version of her is very different and a lot less colorful. She’s basically an Amanda Waller wannabe, running some secret government operation that adds unnecessary bureaucracy to everyday heroes. It’s an intriguing introduction with intriguing potential, but much of that potential goes unrealized.

Wonder Woman #1 focuses less on realizing potential and more on creating a foundation. That foundation does build somewhat on the recent events of DC Rebirth, which led Wonder Woman to question the details of her origins story. Any origin that involves gods impregnating mortal women or bringing clay figurines to life is bound to be confusing, but the foundation here does little to resolve that confusion. In some ways, it outright ignores it, which is a noticeable crack in the foundation.

Rucka tries to fill those cracks in by developing a sub-plot with Steve Trevor and Etta Candy, tying their conflicts to Wonder Woman’s journey. The connection between these details is lacking, but it there is at least some sense of cohesion. It’s limited, but it effectively gives roles to Wonder Woman’s supporting cast. As Batman can attest, a supporting cast is vital in any iconic mythos.

Unlike Batman though, Wonder Woman’s supporting doesn’t directly aid her journey. They just make sure nobody distracts her so she can focus on the task at hand. However, the nature of that task doesn’t become clear until later in the story. Before then, Wonder Woman spends most of her time just warning the monsters that attack her and fighting them when they ignore her warnings. It’s not exactly the kind of tactic that makes a myth epic.

Even so, Rucka does make an effort to highlight the most important aspects of Wonder Woman’s character. She’s not just a warrior and an icon who can survive being on a team with Batman and Green Lantern. She’s a woman of compassion and mercy, offering it even to monsters who stand in her way. Even though they ignore it as if it were typical trash talk, it reinforces a key component of Wonder Woman’s identity.

That identity is a lot more vital in wake of DC Rebirth. With Wonder Woman being so unsure of her origins, it makes sense to remind herself and others of who she is and what she stands for. It ends up being the only real certainty conveyed in Wonder Woman #1 because many other details are left undeveloped and unaddressed.

There’s nothing egregious about the way Rucka handles Wonder Woman or her supporting cast. Nobody sleeps with a god, makes a deal with Mephisto, or trusts Lex Luthor. The story surrounding these characters is simply lacking in context and detail. Without that, the story falls flat and there’s a reason stories like that don’t make their way into AP English classes or comic racks.

The aftermath of DC Rebirth is affecting all corners of the DC Universe. With Wonder Woman, however, these effects seem detached and distant. Wonder Woman #1 tries to build a new foundation on top of one that is still incomplete. The elements of her mythos are there. There are even a few new elements that have the potential to develop. Despite this, the details aren’t there. The connections are weak, if present at all. For a mythos as iconic as Wonder Woman, the standards are high, but potential alone never slayed a titan.