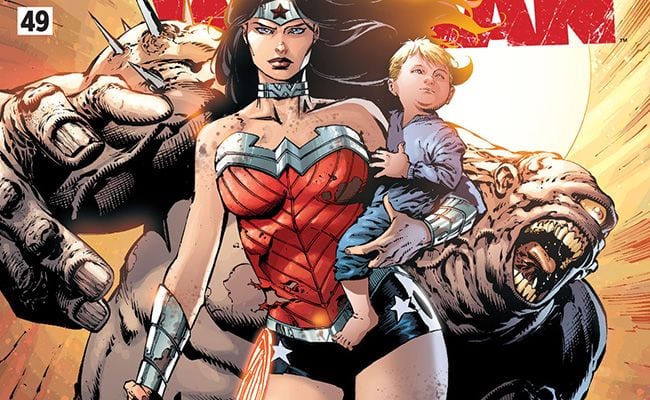 There are a number of common themes in ancient mythology and not all of them involve gods hooking up with mortal women / boys / animals / etc. These themes are often built around the consequences of mortals attempting to defy the will of the gods. It serves as the basis of most major cultural and religious traditions, minus those inspired by George Lucas. Eventually, within the context of these themes, the will of the gods tends to overwhelm the ambitions of the mortals.

When Brian Azzarello kick-started Wonder Woman after the Flashpoint reboot, he built Wonder Wonder Woman’s story around these themes, having her navigate the agendas of numerous gods and the mortals they manipulated. He tied Wonder Woman’s story closer to Greek Mythology and less towards mid-20th century feminism. It helped create a more compelling narrative while proving that there’s just no getting around the centuries-old appeal of gods impregnating mortals.

Wonder Woman’s ties to the gods weren’t just built around her being the daughter of Zeus. She ended up becoming the new God of War while saving Olympus from the wrath of her father’s first of many, many obscene infidelities. She’s had to manage this role on top of being a member of the Justice League, an icon to women all over the world, and Superman’s lover. If it’s true that no woman can truly have it all, then a case could be made that Wonder Woman come closest.

However, the themes of petty gods and the mortals they torment starts to catch up with Wonder Woman in Wonder Woman #49. The plot once again revolves around Zeke and Zola, who were the catalyst to all these holy/unholy upheavals during Brian Azzarello’s run. Meredith Finch’s plot focuses more on the unholy aspects of those upheavals and for once, it doesn’t involve an unplanned pregnancy.

It starts with a mysterious illness. Something or someone, and sometimes that line is blurred when godly forces are at work, has caused Zeke to fall ill. It’s up to Wonder Woman to help him. Zeke is, after all, the reborn incarnation of Zeus, her father. That means she’s essentially babysitting her father. It’s the kind of unholy upheaval that makes the Kardashians look dull and yet it feels oddly appropriate in a mythology where a woman with snakes for hair isn’t even the tenth greatest oddity.

In attempting to help Zeke, Wonder Woman has to confront some of the less holy virtues that are uncomfortably common with gods. As nearly every mortal in the Odyssey learned, the gods tend to exercise a level of moral flexibility that even the most amoral televangelist would find disgusting. They will do and say whatever they must in order to maintain their power and authority. This includes, but is certainly not limited to, betraying those who see them as allies.

This creates a powerful sense of drama in Wonder Woman #49, which is by far the greatest strength of the story. Since the latter half of Brian Azzarello’s run, Wonder Woman has considered Hera a friend and ally in her ascent to her godly roles. In terms of the larger narrative, she’s someone who was easy to root for. She was, after all, married to a god who treated infidelity as an Olympic sport. Her gaining a greater role on Olympus in his absence felt like obscenely late karma. Now, she’s in a position to screw Wonder Woman over in a way that might not leave her pregnant, but it will break her heart.

Wonder Woman has to entertain the uncomfortable possibility that Hera might be the one causing Zeke’s illness. It’s a possibility that Hecate, the Goddess of Magic and Witchcraft, presents to her and it’s not one Wonder Woman can just casually discount. She’s already learned that gods are annoyingly adept at keeping secrets. She can’t, given her experience with other gods and the illegitimate offspring they bear, blindly trust that Hera is above plotting against her.

As uncomfortable a possibility it might be, Wonder Woman doesn’t let this distract her from helping Zeke and Zola. It’s another common theme that Meredith Finch carried over from Brian Azzarello and it works perfectly well within the context of the narrative. Like Azzarello, Finch has Wonder Woman carry out tasks that feel like they came right out of the director’s cut of Greek Mythology. For that same reason, it makes that same narrative feel limited.

There’s a lot of drama and uncertainty in Wonder Woman #49. While this helps create a plot with plenty of tension, it does little to add much excitement. There’s no Trojan War in this story. It’s mostly Wonder Woman having to navigate a world of gods who may or may not be plotting against her. The only bit of action involves a cyclops and even that unfolded off-panel. If it were the director’s cut of any movie, then it would still be missing some key scenes.

That’s not to say that the lack of action derails the story. The story in Wonder Woman #49 isn’t built around the kind of conflict that would require epic, CGI-rendered battlefields on the level of a Peter Jackson movie. It’s built as a personal drama where Wonder Woman is trying to help a friend while being mindful of the gods’ tendency to act in very ungodly ways at times. It’s a story that has many strengths, but the reliance on this drama does cause it to drag at times.

Even if the story doesn’t get anyone’s heart racing, it does generate plenty of intrigue. Meredith Finch does a good job of generating the same intrigue that made Brian Azzarello’s run on the series so engaging. It might not result in another mortal woman being impregnated by a god, which would make it an novelty in Greek Mythology, but it does adhere to the same powerful themes that has helped certain mythologies stand the test of time.