Won’t You Be My Neighbor? (Morgan Neville) is one of the most celebrated and cherished movies of 2018, and for good reason. In a political climate marked by increased tribalism in which the “other side” is not listened to with respect and dignity, but rather, routinely degraded and ridiculed, Fred Rogers offers a welcoming, rejuvenating alternative. As Neville’s documentary powerfully narrates, Mr. Rogers is a universal model of kindness, respect, humility, and love. In a context in which our political and cultural leaders are expected to have a Versailles-sized closet teeming with lurid secrets, outlandish scandals, and damaging practices, Mr. Rogers is the most welcome of anachronisms: a man whose television persona mirrored his personhood. His reel image was interchangeable with his real life, as talking head after talking head in the documentary verify.

In the 21st century, we have been culturally trained to expect every documentary to reveal the dark side of our heroes. We expect our heroes to be revealed as swindlers, cheaters, abusers, racists, misogynists, homophobes. In their dominant form, documentaries are structured as exposés that uncover the secrets and scandals of their subjects, rather than narratives that celebrate and elaborate on the values embodied and practiced by widely recognized role models. Viewers wait patiently for Rogers’ skeletons to be disclosed. But no such skeletons exist. Or if they do exist, they don’t matter to the story that Neville tells.

A pioneer of early childhood education, Rogers understood early on the radical potential of the then new medium of mass communication: television. Rather than simply being another mode for cultural distribution, television, Rogers intuited, was perhaps the most important communications invention of the 20th century. Television was an intimate screen into the homes of millions of Americans. Rogers, an ordained minister, understood that television could be used as a medium to do God’s work, to spread the gospel that every human being is made in the image of God with no qualifications and no exceptions. Rogers used television as a way to daily reinforce our universal duties and responsibilities to care for everyone; to respect the labor of everyone; and to work incessantly for a better, more socially just world. Our work on this Earth, Rogers insists in the documentary, is Tikkun Olam (repairing the world).

At a time of civil and political strife, when Americans needed something to unite, rather than divide them, Rogers created a show that reminded people what it means to be a neighbor. To be a neighbor means to open one’s door to the ideological “stranger”, to the “other”. The daily practice of opening one’s door is simultaneously a practice of opening one’s heart, and the result is that the “stranger” proves not to be so strange, and the “other” not so other.

Mr. Rogers began his show in 1963, the same year the Southern Christian Leadership Conference (SCLC) launched The Birmingham Campaign to make visible to national audiences how Birmingham continued to practice segregation in all institutions, including schools, businesses, housing, and swimming pools. In this era in which it was “normal” for whites and blacks to live in segregated neighborhoods, Rogers’ television show daily emphasized that we all need to work diligently on being worthy of the title “neighbor”. To truly be a good neighbor meant daily acting in accord with God. In Rogers’ universal sanctuary, God was another name for “love”. Being a neighbor, therefore, meant being radically open to people of all races, ethnicities, nationalities, abilities, genders, and sexualities.

Neville’s Won’t You Be My Neighbor? may prove one of the most vital political movies of 2018. Yet there’s an important opportunity missed in the documentary when it comes to sexuality. Sexuality comes to the documentary’s foreground when Rogers learns that François Clemmons, who played Officer Clemmons, is gay. 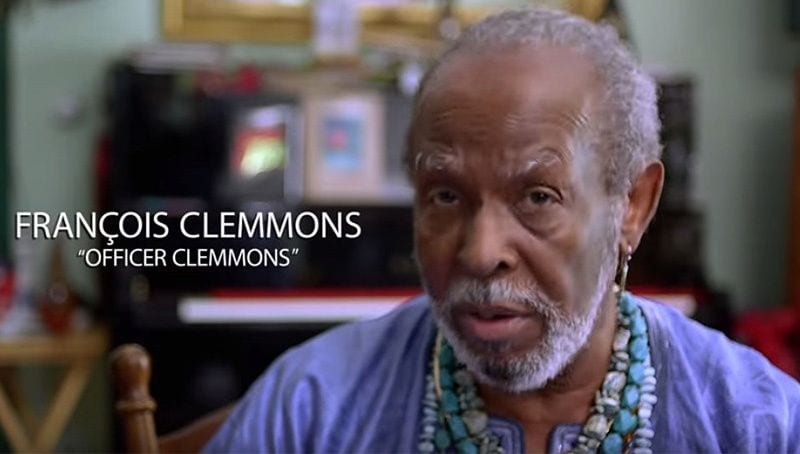 Clemmons played a seminal role in Rogers’ religious and political mission to spread the gospel of love. In an episode that originally aired in 1969, shown in the documentary, Clemmons’ racialized body becomes prominent in protesting racial segregation. In this episode, Officer Clemmons enters Rogers home on an extraordinarily hot day. To help cool down, Rogers suggests to Clemmons that he soak his feet in a plastic pool. At a time when myriad cities forbid whites and blacks from sharing the same swimming facilities, this sequence was radical. Even more, Rogers offers and proceeds to wash Clemmons’ bare feet, an act that imitates Jesus and one which, in the mid-20th century, was seen by many as “un-American”.

Clemmons’ racialized body was essential in this political intervention. Yet there was another opportunity in which Clemmons could have been part of Rogers’ mission to demonstrate and model “radical kindness” and radical hospitality. As shown in Won’t You Be My Neighbor?, Rogers learned that Clemmons had been frequenting a gay bar. When Rogers confronted Clemmons with this rumor, Clemmons confessed that indeed he was gay. For a television show that preached that love is universal, that everyone is special as they are without having to achieve or prove anything, Clemmons’ queerness proved too threatening for this nationally-broadcast neighborhood. Rogers insisted that if Clemmons was to remain on the show, his queer identity would have to remain invisible, banned from this neighborhood of love. More specifically, Rogers gave an ultimatum that if Clemmons was to continue to be a part of this universal neighborhood, he would have to cease attending gay bars and cease all activities coded as “gay”.

It’s easy from the confines of the present to lambast the past for not living up to higher ethical standards. It’s easy to critique Rogers for his refusal of Clemmons’ sexuality. Yet as the documentary claims, Rogers’ sponsors would have immediately withdrawn financial support if it was disclosed that a central character on the show was gay. Perhaps this is true. Perhaps Rogers insistence that Clemmons stay in the closet was motivated out of economic necessity, that it was a forced compromise.

I’m not here to judge Rogers’ decision. I do, however, want to question Neville’s aesthetic decision in crafting his documentary.

Late in the movie Rogers’ wife, Joanne Rogers, shares that she and her husband had many gay friends and implies that her husband was supportive of the LGBTQ community. In one of the more alarming sequences in the movie, Neville shows far Right Christian sects protesting Rogers’ funeral. According to these protesters, Rogers embodied what was satanically wrong with America. People like Rogers, they vehemently protested, encouraged homosexuality to flourish in the United States. Fred Phelps, the leader of the aggressively homophobic Westboro Baptist Church, asserted that Rogers “gave aid and comfort to homosexuals … His syrupy teachings led millions astray. He was a wuss and he was an enabler of wusses“.

As the documentary shows, a discourse circulated that Rogers was secretly gay. His soft, kind, patient, loving practices were antithetical to the dominant mode of masculinity. In contrast, Won’t You Be My Neighbor? shows how multiple masculinities exist and can be practiced. But there’s one form of masculinity that the movie forecloses: queerness. In response to the homophobic discourse that denounced and vilified Rogers as a “fag” and as a blight on the United States, Neville includes a sequence, at the movie’s end, that refutes the possibility of Rogers’ queerness. Clemmons tells the camera that he had been around Rogers for decades. Positioned as an authority on queerness with infallible “gaydar”, Clemmons states that Rogers was not gay.

To make a documentary, of course, requires filmmakers to record hundreds of hours of content. What’s alarming is not what Clemmons said in an interview that most likely stretched out for hours, but that Neville included it in his movie and inserted it at the movie’s end. This inclusion and placement leaves audiences with the curious conclusion that Rogers was categorically not gay.

But why is this important? Why, in other words, does the movie shut down the possibility of queerness?

To be clear, I’m not claiming nor even suggesting that Fred Rogers was gay. But I think the more important point is that it doesn’t matter. Rogers’ daily practice of radical love transcends identity politics, narrowly conceived. The more radical move would have been if Won’t You Be My Neighbor? left open the possibility of Rogers’ queerness. Being a neighbor means being open and hospitable to anyone and everyone, regardless of their backgrounds, experiences, identities, and identifications. Hospitality does not shut its door to the other. Being a neighbor, practicing daily love and care, doesn’t discriminate.