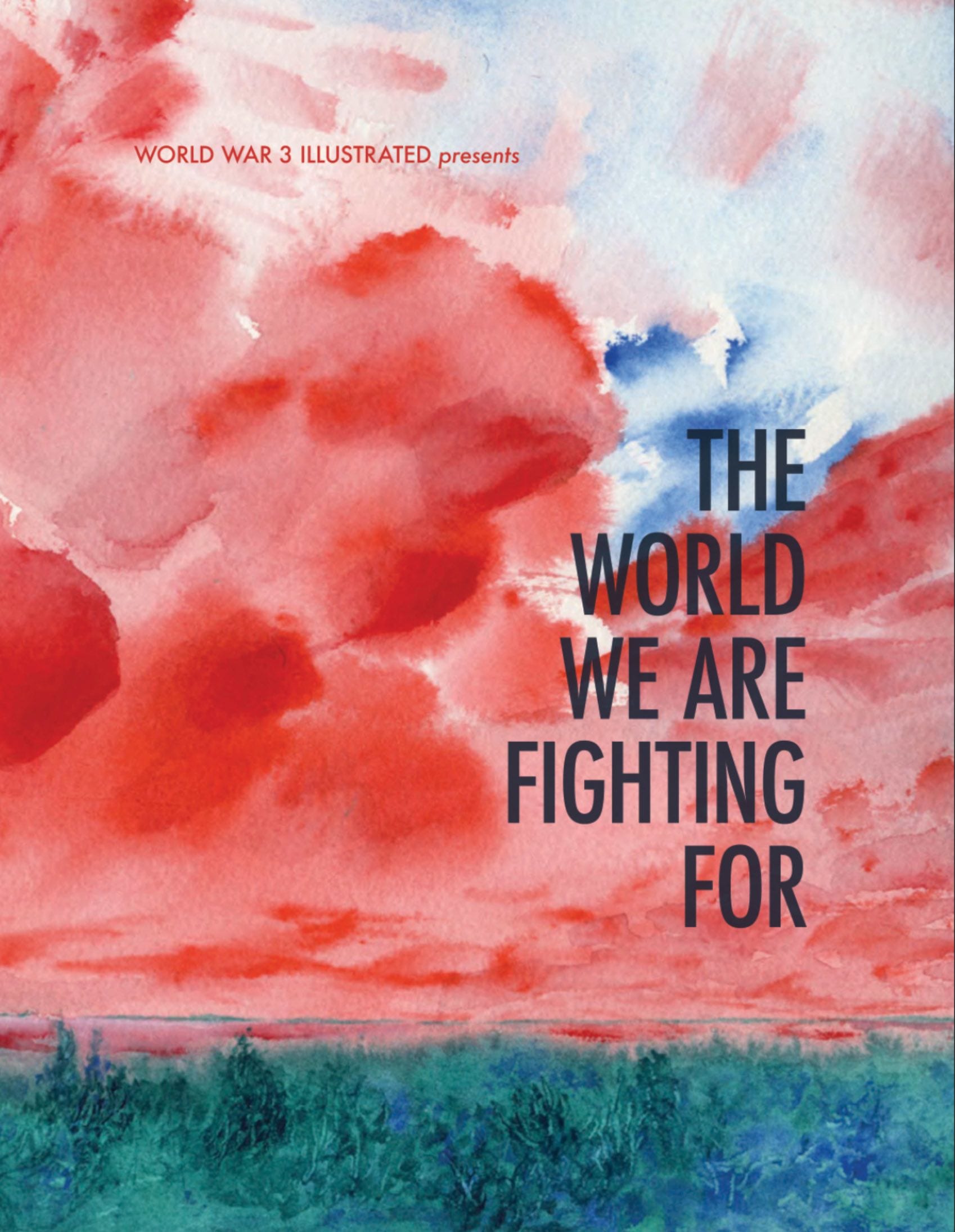 In spite of everything that’s happened since Trump joined the stage of the 2016 Republican presidential debates, even just a year ago it might have been difficult to imagine a comics magazine with a taste for futuristic political dystopia overshadowed by the actual Armageddon of daily headlines. In the US alone, September news reports have been an apocalyptic smorgasbord: the West Coast is in flames, the pandemic death count is nearing one million, there are yet more tear-gassed protestors, and the president is still fanning his weekly scandals without repercussion on Twitter. Cartoon science fiction and political parodies seem pleasantly quaint in comparison.

Of course, when World War 3 Illustrated took its name in 1980, the world braced itself for yet more trouble as the US political landscape shifted hard to the right, upending the Cold War with it. Comics authors and editors Peter Kuper and Seth Tobocman found their archvillain in Ronald Reagan—a president whom even Democrats might now embrace, if forced to choose, to at least avoid another stranger-than-science-fiction term of Donald Trump.

As the Reagan era fades into the recent past, World War 3 Illustrated has continued to evolve as a living political document expressing the struggles and aspirations of its leftist activist-artists. Like the two previous issues, #51 is a book-sized annual, compiling a dizzying array of work by nearly 40 creators. After 2019’s Shameless Feminists and 2018’s Now Is the Time of Monsters, the editors (founders Kuper and Tobocman are joined by Ethan Heitner) envisioned something uplifting: a tribute to “the humane socialist vision of Bernie Sanders”, who last fall, when the issue was planned, appeared to be on his way to claiming the Democratic nomination and a November face-off with “the fascist future of Donald Trump.”

That alternative timeline diverged with an even more unimaginable premise: the Biden-Harris ticket. The distance between our actual political present and the one World War 3 Illustrated longs for makes The World We Are Fighting For that much more compelling. The COVID-19 pandemic and the international Black Lives Matters protests might represent instabilities in society, but they are also opportunities. “Another world ACTUALLY IS possible,” the editors argue, and, more importantly: “That world is up for grabs.”

The 220-page issue features several artists that previous readers of the series will appreciate: Sue Coe, Eric Drooker, Ben Katchor, Kevin Pyle, and of course, the editors themselves. The comics vary widely in length, from the single-digit sequences of Elizabeth Haidle, Jackie Lima, Terry Tapp, to the double-digit narratives of Sandy Jimenez and, the longest, Tobocman’s 26-page retrospective.

I especially admire the one-page artworks of Coe, Meredith Stern, Jos Sances, and Mohammad Sabaaneh—all of which evoke the expressionistic woodblock styles of past political movements, an effect further strengthened by the images’ white lines printed on the volume’s black pages. Single images also allow faster turn-around. For example, Coe’s June-dated image of Trump watching police beat protesters as he stands with a raised Bible is a clear reference to the tear gas-clearing of Lafayette Park before his St. John’s Episcopal Church photo-op in June of this year. (courtesy of AK Press)

Other comics acknowledge the unexpected shift in reality in literal post-scripts. After Sasha Hill and Annabelle Heckler tell the story of squatters eventually purchasing abandoned Brooklyn buildings and transforming them into thriving communities, they add a pair of pages to show the continuing collective efforts in the face of the pandemic and the disproportionate hardships of the spring lockdown.

Steve Brodner’s “T he Greater Quiet” was conceived well after the editors’ original vision. Brodner offers a half dozen caricature portraits of “those lost in the pandemic”, including a Walmart employee, a nurse, an incarcerated woman, a grocery clerk, a geriatric psychiatrist, and a hospital manager. Mac McGill‘s “The Virus” tackles the topic through five full-page Trump portraits that evolve from swirling comb-over to COVID-19 microbe in a balance of representation and abstraction.

Though primarily focused on the US, the issue also gestures toward international connections. Argentina-born artist José Muñoz provides the watercolor cover depicting his memory of La Pampa providence. John Vasquez Mejias‘ excerpt from “The Puerto Rican War” is a study in woodblock-style of the colonial history and fight for independence of the territory the US claimed at the end of the 19th century. Susan Simensky Bietila‘s “Water Protectors” documents the struggles of the Menominee and Ojibwe tribes in northern Michigan and southern Canada, and Nere Kapiteni and Rebecca Migdal set their Trump parody in Antarctica where Donald and Melania have been exiled on a floating island of ice because no nation will accept them.

The issue is also bookended with the colorful comics of Colleen Tighe and Peter Kuper, giving The World We Are Fighting For a fittingly vibrant entrance and exit. The eclecticism is difficult to summarize, as every few pages offer some new and boldly different artistic style and storytelling vision, yet they cohere into the magazine’s political mission and artistic call-to-arms.