Certain time-displaced, alternate universe, or cloned characters never wear out their welcome. Time paradoxes aside, someone like Cable is here to stay. Josh Brolin’s role in Deadpool 2 and Dafne Keen’s role in Logan effectively cements that. Those are rare exceptions, though. For the most part, characters derived from others or a byproduct time travel have an expiration date. It’s arguable when that date was for the original five X-men who first came to the future in All-New X-men, but most agree that date has long since passed.

Pretty much every circumstance that kept the time-displaced X-men in the future is moot at this point. Jean Grey is no longer dead. Cyclops never causes a mutant genocide. Iceman doesn’t stay in the closet. Angel never loses his wings. At one point, there are legitimate barriers keeping them in the future, which play out in X-men: Battle of the Atom. However, most of those barriers crumble throughout Cullen Bunn’s run on X-men Blue. They’re now at a point where they not only can go back. They accept that they must go back. 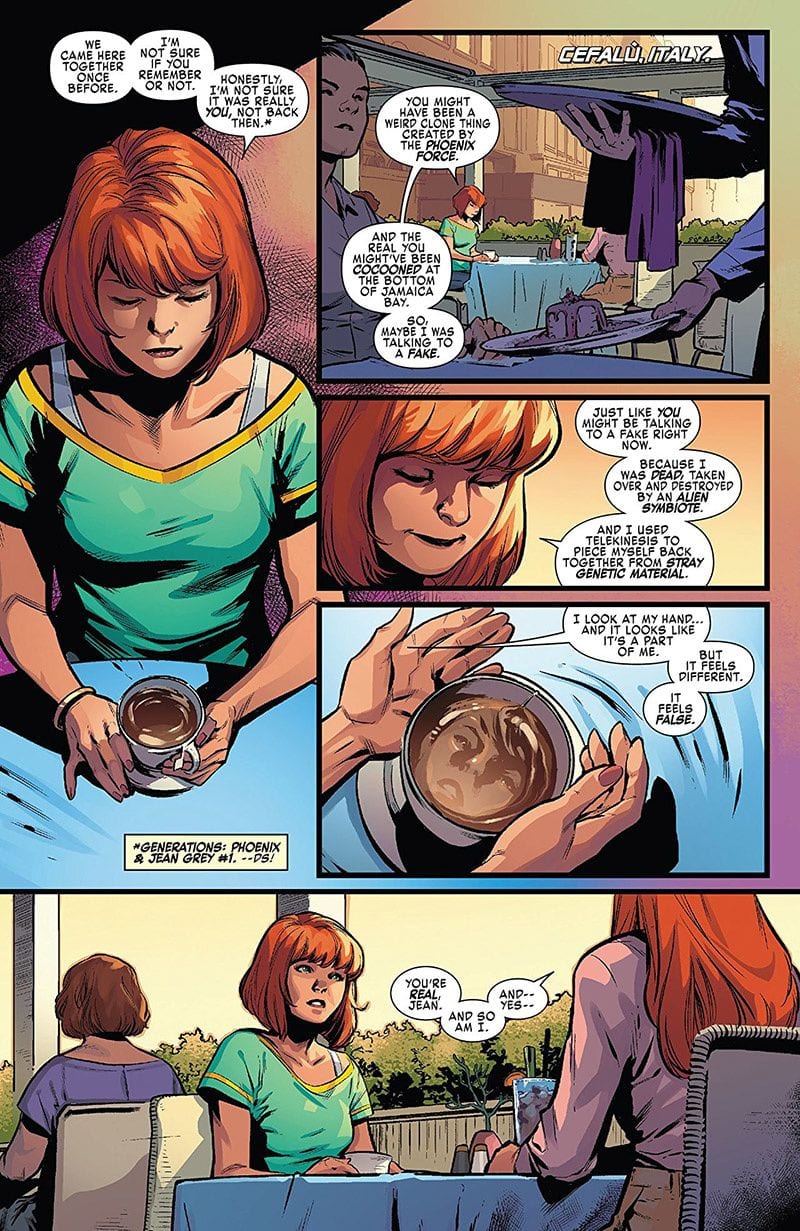 While the logistics of that story play out in Extermination, there’s room for reflections and reconciliations. X-men Blue #35 doesn’t act as a prelude to Extermination as much as it does an epilogue to the journey that Brian Michael Bendis began in All-New X-men. These characters, despite the many myriad of complications incurred by time travel, are in a very different place than they were when they first arrived. Some improve their situations. Some see it become much worse. In any case, they’re all painfully aware of the headaches generated by time travel.

No matter their status, these iconic characters are no longer the wide-eyed idealists that they were when Charles Xavier began training them. They’ve seen a future where idealism becomes tainted at every turn and spirits get broken almost as often. In doing so, these characters diverge considerably from the path they were on before. The structure of X-men Blue #35 is built around each member of the time-displaced X-men confronting their future selves but affirming that they’re not the same person.

The problem is they can’t be the person, anymore. Beast makes clear that to avoid any further pitfalls relating to time travel, he and his fellow time-displaced X-men have to forget everything they’ve experienced during their time in the future. Going back with the knowledge they have, from who wins in every superhero civil war to who plays in every Super Bowl, has serious implications for the overall continuity of the Marvel universe. Given the many convolutions of that continuity, as it stands, the timeline can’t sustain itself.

This makes for a strange, but intriguing tension between the characters. In each conversation they have with their future selves, they try to affirm they’re their own person. However, they also acknowledge that they can’t separate themselves from who they’re destined to become. If they do, they break reality and after the events of Secret Wars. 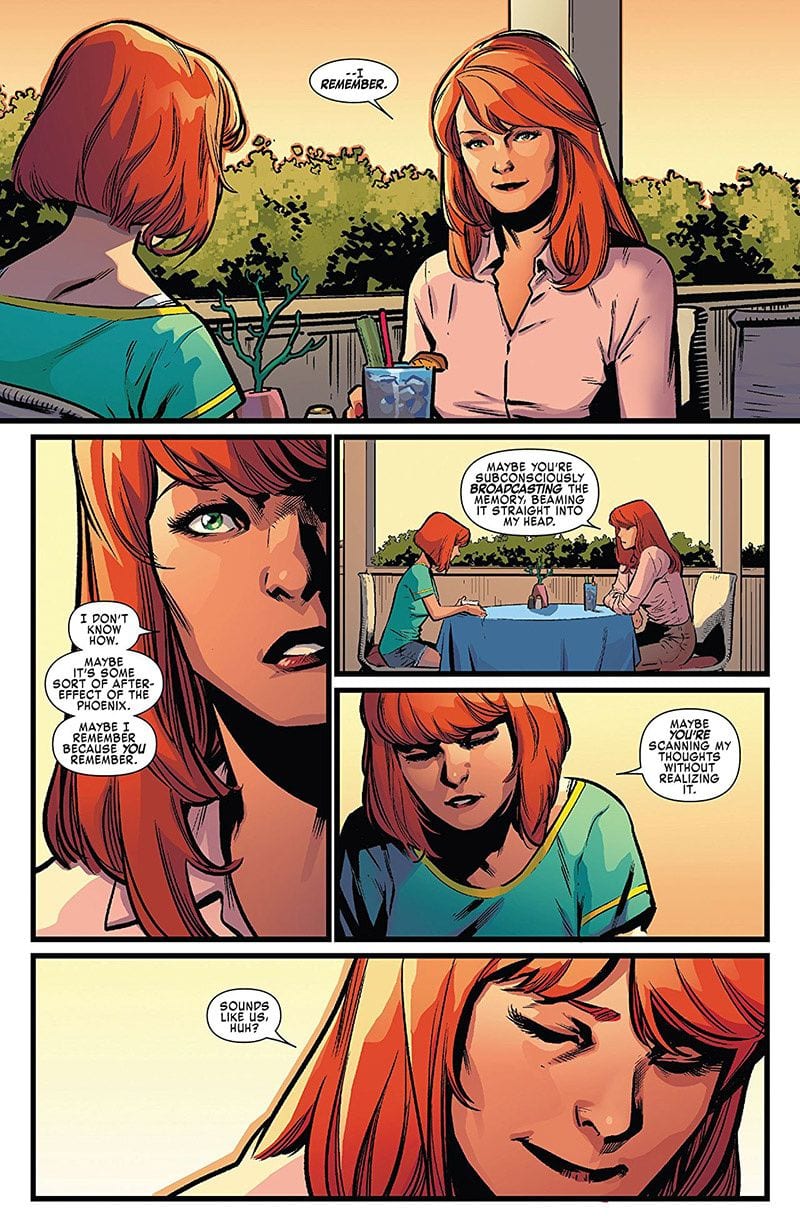 Each member of the time-displaced X-men deals with their own existential crisis, of sorts. Jean comes off as having a full-blown identity crisis, lamenting at how she feels false in the presence of her older self. To some extent, she’s right. She and her teammates aren’t the “true” version of the original five X-men at this point in the timeline. They’re anomalies that have to disappear completely in order to keep reality intact. To them, though, going back to their own time doesn’t mean resolving a long-standing time travel plot. It means erasing themselves from existence.

Bobby seems to understand this more than the others. For him, going back in time means going back to being closeted, and that bothers him. It’s one of those ideas that would bother anyone identifying as LGBT, having to go back to that isolated place and live a lie. Even though his older self is in a much better place for his identity, it doesn’t make the underlying notion less distressing.

That’s the overall sentiment of each time-displaced character in X-men Blue #35. They agonize over the idea that everything they’ve done in the present will only serve those in the present. They still have to go back and endure all the hardships, heartaches, and losses. Despite accepting that they must return to their own time, they establish that their preference is to stay. Existing is just inherently more appealing to oblivion.

While it’s easy to sympathize with those feelings, Bunn belabors the consequences of following those feelings. Parallel to the interactions between the time-displaced X-men and their counterparts, there are brief flash-forwards that depict the future that unfolds if they don’t go back. This side-story doesn’t just link X-men Blue #35 with the events of Extermination. It reveals the extent of the existential crisis the X-men face. 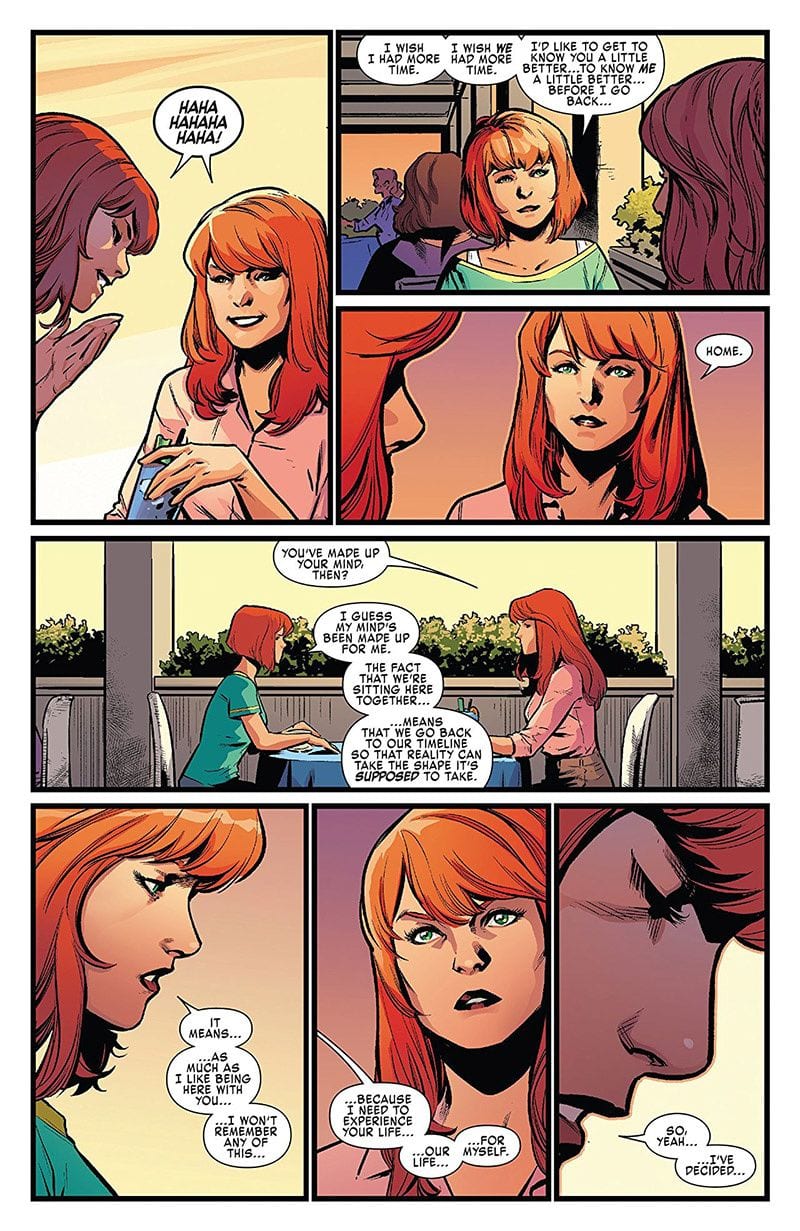 Even if going back to their own time is overdue, there are still a lot of problems that these characters want to resolve. Angel is still going to lose his mind and become a horseman of Apocalypse. Cyclops is still going to end up dead and vilified for all the wrong reasons. Beast is still going to end up a blue, furry ape-man who plays fast and loose with time machines. Despite the many harsh realizations they’ve endured, they still retain that youthful idealism that defines the original five X-men.

If that’s the primary goal in X-men Blue #35, it succeeds. Regarding furthering the various other plots that have been unfolding since X-men Blue began, however, it comes up short. There’s a lot of lamentation and frustration, but not much else. This being the penultimate issue of the series, there isn’t time to tie up every loose end. However, that’s the appeal/irony of time travel stories. If everything were easily resolved, then time travel wouldn’t be necessary in the first place.