The Flavor of Green Tea Over Rice
Yasujiro Ozu
Criterion

The Flavor of Green Tea Over Rice (Ochazuke no aji) (1952), available on Criterion Blu-ray in a pristine and seductive 4K digital restoration, brings the Region 1 debut of two films from Japan’s Yasujiro Ozu. Less pristine of those two films, however, is the bonus What Did the Lady Forget? (Shukujo wa nani o wasureta ka) (1937), but we’re lucky to have any pre-war Ozu films, or indeed any pre-war Japanese films.

These films have been paired for their strong similarities. One isn’t a remake of the other but rather a rethinking of the same elements. Both films focus on a well-off, childless older couple whose marriage is disrupted by a headstrong modern niece, named Setsuko in both stories. Both films open with the camera on a moving car. Both have scenes at a kabuki performance. Both have the niece getting involved off-handedly with a young friend of the husband. Both have the husband pretending to scold the niece in front of his wife. And both have the couple reaching a crisis that’s resolved by mutual apology and the promise of reconciliatory sex — after dining.

In both films, the uppity and unmanageable niece represents modern youth influenced by western ideas and film stars — a magazine with pictures of Marlene Dietrich in the first film, a Jean Marais movie in the second. The niece dresses in modern clothes while her aunt wears only traditional kimonos. Both films imply that the niece isn’t wrong, only that she belongs to an eternal cycle of youth in society.

Both films have the uncle wearing western suits and ties, as he’s a medical professor in the first film and a salaryman in the second. Since Japan’s pre-war and postwar realities are different, the former being under empire military rule that censored films, and the latter being under American military occupation that censored films while restructuring society politically and economically. The fact that the same themes of tradition and rebellion fit so snugly into each context shows the eternal nature of these generational developments. 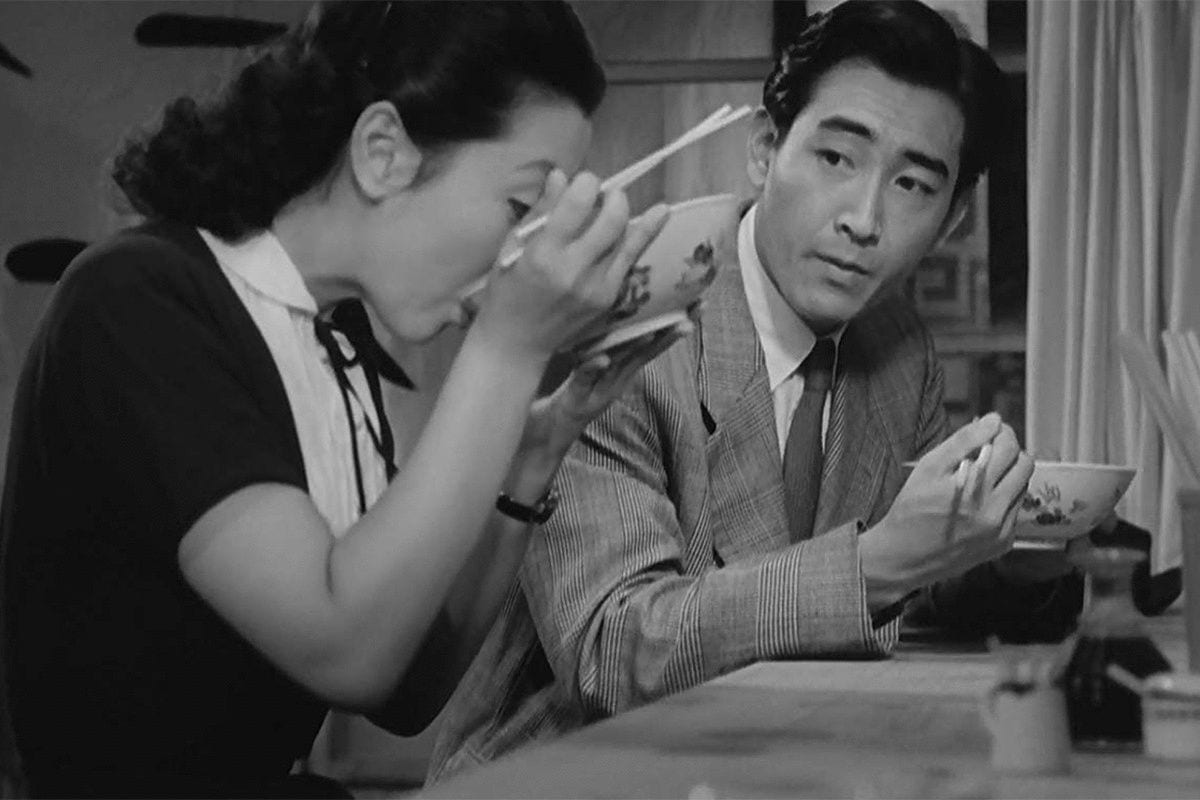 What Did the Lady Forget? is a curious, teasing title, as we’re never quite sure what the lady forgot, but the climactic resolution comes about with one of the most shocking moments in all of Ozu’s quietly observed domestic dramas. Feeling cornered between two women — the traditional and modern, the past and future — the husband impulsively slaps his wife. It’s a very mild slap, but in Ozu’s output it’s the equivalent of a gunshot. Staged with the wife’s back to the camera, the action remains more implied than actual even though it’s in front of us. The wife, like the viewer, is more shocked at the concept of the thing than the reality.

Complicating the moment is that the niece is delighted by the gesture and compliments her uncle on it. Still, the husband is chagrined at his behavior and hastens to apologize. Later, the wife brags about the slap to her gossipy friends, and they express envy. It’s certainly a different social context from the later film, The Flavor of Green Tea Over Rice, in which the wife brags to her friends about their mutual tears of reconciliation.

In The Flavor of Green Tea Over Rice, the ex-soldier husband expresses the view that he’s had his fill of war when he runs into a former solder who served under him in Singapore and now runs a cutting-edge pachinko parlor. All forms of violence are anathema to the husband now and he’d rather suffer quietly. The former underling agrees and then, over sake, launches into a nostalgic soldier song about a cremated comrade and the clear starry sky. This scene echoes an earlier one in which the wife and her cronies, having impulsively decided to relax at a spa after lying to their husbands, also launch nostalgically over sake into an old song from their girlhoods.

The Flavor of Green Tea Over Rice is the more mature and subtle film and the more visually artful, but both films are quietly absorbing and engaging, and both demonstrate Ozu’s flair for observing everyone from floor level. The camera occasionally moves in both films but mostly remains steady. The opening shot of What Did the Lady Forget? plants the camera on a car’s running board behind the huge front fender. The opening scene of The Flavor of Green Tea Over Rice takes place from various angles inside the moving car, sometimes looking out the window and sometimes observing the aunt and niece riding in the back seat, where their contrasting styles of dress tell us all we need to know. 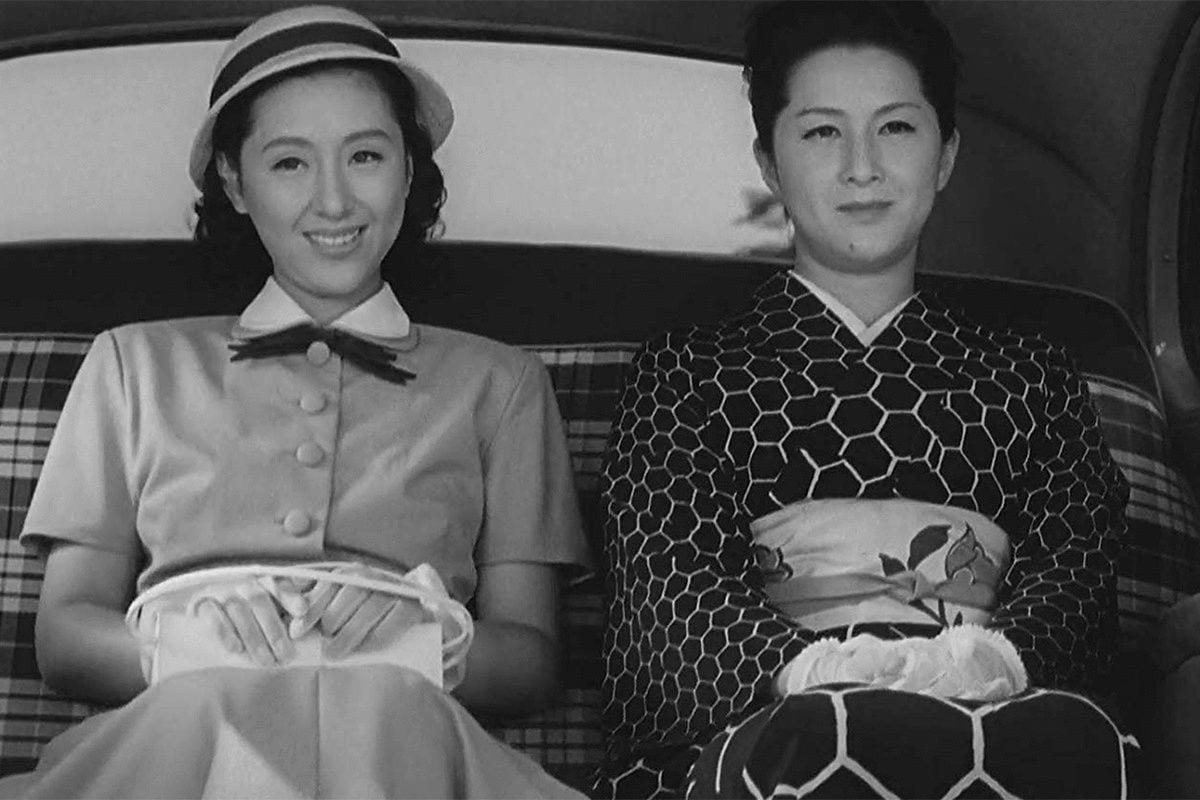 The Flavor of Green Tea Over Rice is comparatively a festival of camera movements, as Ozu almost makes a fetish of quietly gliding the camera forward or backward in various shots, usually at the beginning or end of scenes. In a bonus appreciation of the film’s style and themes, critic David Bordwell speculates on the meaning of these dolly shots and their sense of ghostly motion, not to mention the extended contemplation of the receding lines out the back window of a train. He believes they have partly to do with the simple joys of cinema in a film extolling the virtues of simple joys. These moments give pleasure, yet they’re also foreboding and imply the undercurrents of conflict that slowly emerge in the story’s relationships.

These films are called comedies, even satires for their wry observations of human foibles, lies, aspirations, and resistances to one’s expected place. Emotionally, they occupy a space in which we never know what can happen or how it will be resolved. Tension is created patiently, through the accumulation of details that add up to intolerable pressure that must be relieved. Ozu’s films can often be described as movies in which nothing happens — nothing except the revelation of a world, its inhabitants, and a deep understanding of their contradictions.

Despite the obvious similarities between the two movies, The Flavor of Green Tea Over Rice isn’t so much based on What Did the Lady Forget? as on an unrelated pre-war scenario that Ozu didn’t make, in which the differences between a husband and wife come to a head and resolve after he’s called up for military duty. According to the scholarship, the military censors wanted a more celebratory final meal for the story. Ozu, having just returned from two years of military duty in China, instead chose to shelve the project. When he dusted off the marital idea for Japan’s postwar scene, he seems to have grafted it onto the basic structure of What Did the Lady Forget?. Ozu co-wrote this film with Akira Fushimi and seamlessly updated its social observations for the new era.

In keeping with Ozu’s eye for social history, The Flavor of Green Tea Over Rice is especially rich with observations on how the Japanese were spending leisure time. Aside from the kabuki show, the movie theatre, the pachinko parlor and the spa, we visit a baseball game and a bicycle race. In both films, the theatre scenes are presented as vast wistful spaces in which female ushers occupy their time like figures in an Edward Hopper painting, waiting eternally for something to happen that will require them. What Did the Lady Forget? has a brief cameo by a film star who arouses the women’s comments. 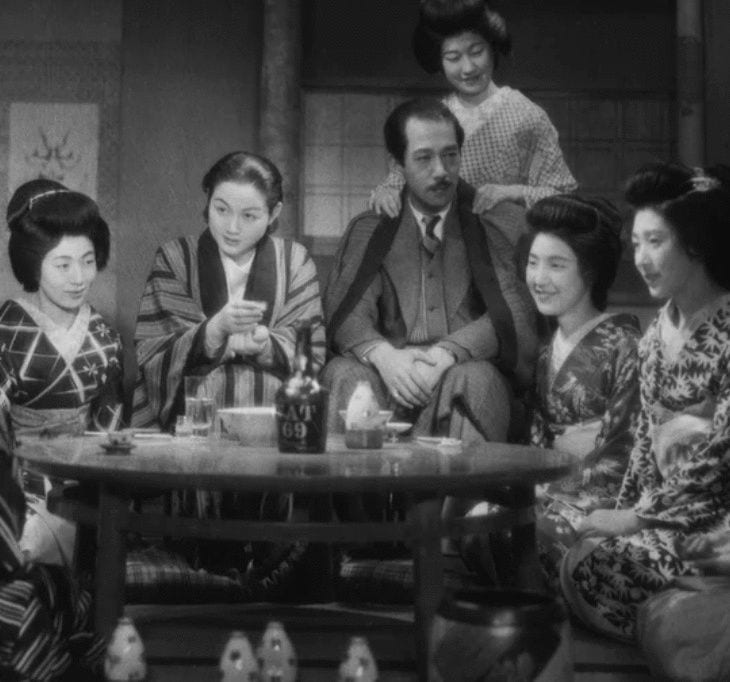 scene from What Did the Lady Forget? (Criterion)

These are far from the most celebrated of Ozu’s films, yet they capture that ineffable quality critics mean by the phrase “Ozu film”, a lyrical and civilized spell, a quietly devastating hymn to domesticity, social conflict, passing time, the search for harmony. The Flavor of Green Tea Over Rice, as in so many of Ozu’s postwar work, involves a young woman who resists attempts at arranged marriage. Yet the bulk of the drama is what happens to a marriage whose ill-matched couple has been coasting for 20 years, as seen in What Did the Lady Forget?

An extra discusses the long personal and professional collaboration of Ozu and Kōgo Noda, the co-writer of The Flavor of Green Tea Over Rice and most of Ozu’s famous films. Their relationship was so sympatico as to reflect similar drinking habits, yet sometimes stalemates of disagreement had to be resolved in their own good time. These quirks, coupled with the fact that they lived together while writing, can make us think that the bachelor Ozu’s insights into marriage derive from such a friendship.

In a valuable essay in the liner notes, Japanese scholar Junji Yoshida explains out how details of Japan’s postwar evolution, such as increased female empowerment, signal themselves in the film. He writes, “This comedy’s simultaneous fascination with class and avoidance of representing any serious tensions related to it reflect the new capitalist values that Japan was beginning to accept, as well as the way these values overlay older structures of social stratification based on skin tone, class, gender, and regional origin.”

What Did the Lady Forget? stars Tatsuo Saitō as the husband, Sumiko Kurishima as the rather harshly officious wife, Michiko Kuwano as niece Setsuko who allies with her uncle in sympathy, and Shuji Sano as the footloose young man who appeals to her. The Flavor of Green Tea Over Rice stars Shin Saburi as the husband, Michiyo Kogure as his more sympathetic yet haughty wife, Keiko Tsushima as headstrong niece Setsuko, Kōji Tsuruta (a popular singer) as the young man, and frequent Ozu actor Chishū Ryū as the army buddy who disparages pachinko as a disturbing modern trend while owning the business.