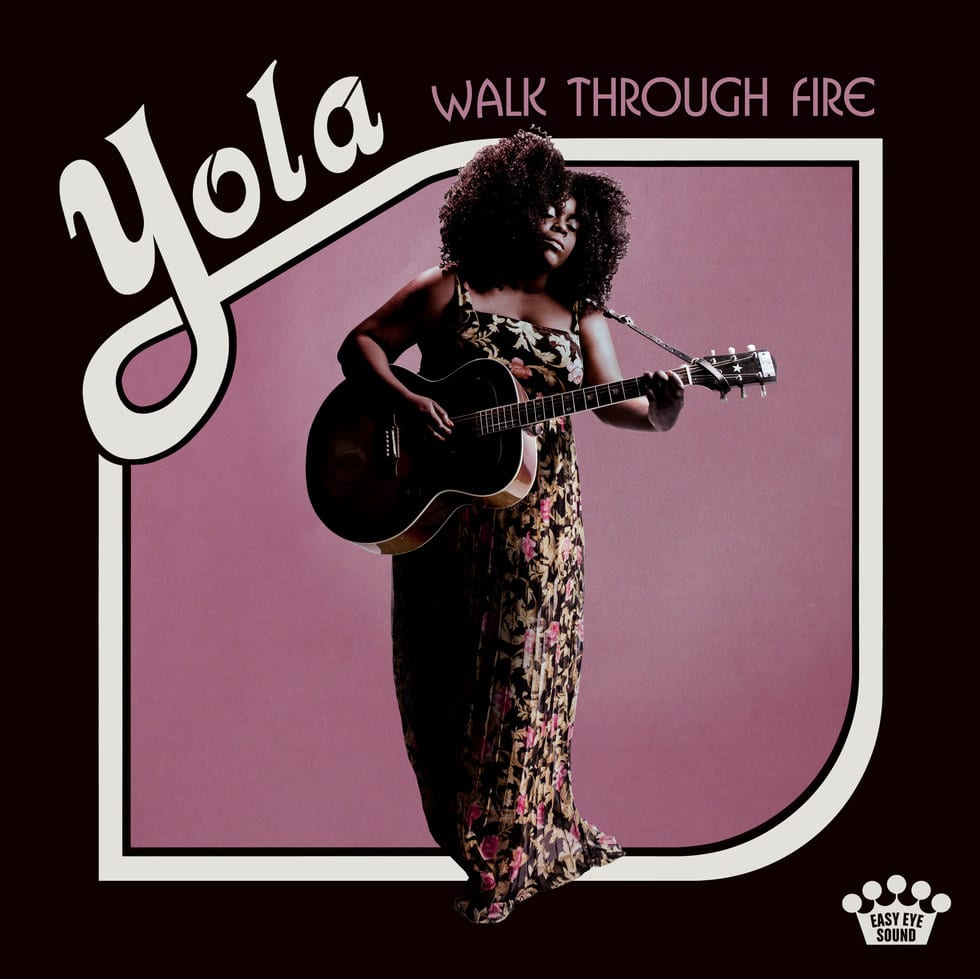 “Discovered” by the Black Keys’ Dan Auerbach after he viewed a video of her performing in a Nashville bar, he produced British singer and musician Yola‘s debut record Walk Through Fire for his Easy Eye Sound label. Auerbach and a team of musician’s compliment and back-up Yola’s endearing vocals and the beauty is clearly written and performed on each track. Sincerity and care are present in her vocals and the connection they deliver for the listener, resulting in an album that grows in strength in an engaging manner as it progresses. Each track is unique and offers a particular emotional and musical feel that blends its overt soul and country styles seamlessly.

Yola’s backstory is heart-wrenching and demonstrates the hard-fought success Walk Through Fire represents. She was born in Bristol and raised in the UK and endured a life of poverty with an uncaring and unsupportive parent that banned music. Yola later lived homeless in London before working as a writing and performer, with groups like Massive Attack and Phantom Limb. She embarked on her solo career in 2016, finding her way to Nashville where she and Auerbach met.

The album includes a retro, vintage quality in its sonic range, sounding as though it was recorded decades ago and went unreleased to great loss. Yola’s songwriting partly compliments this stylistic element, with emotional range invoking soulful suffering and simultaneously resilient for redemption and uplift. The musician’s background ostensibly contributes to this aspect, too, and the timelessness of the album helps define its strength. Reportedly, when Auerbach first met Yola, he complimented her immediately with insight into these elements: “Her spirit fills the room, just like her voice… she has the ability to sing in a full roar or barely a whisper and that is a true gift.” It’s hard to ignore the success of the album in capturing Yola’s spirit in her performance. It captures you immediately.

Instrumentation starts lightly on Walk Through Fire, before Yola’s vocals slowly slide into place on the opening track “Faraway Look”. The song echoes with resonance and mood and her vocal delivery growth in strength while evoking a true distance in line with its title. Immediately, the stylistic mixture of soulful vocal range and horns are joined with ease by country percussion and expansive range as though performed in a hall. A similar effect is captured later in the album on “Deep Blue Dream”, but with more dominant country elements and a haunting vocal parted by a fiddle solo and orchestral backdrops.

The stylistic range of Walk Through Fire immediately changes with “Shady Grove”, a track full of quiet and sweet yearning, and akin in tone to a fairy tale with popping instrumental melodies. And the album easily shifts to “Ride Out in the Country”, a track with a strong instrumental quality highlighted by a guitar solo that repetitively closes out the track. Yola dominates those songs regardless, her vocals inviting and the obvious focal point. But, “It Ain’t Easier” slows the mood to give Yola’s vocals more resounding soul impact alongside growing instrumental accompaniment. Electric piano drives the track while fiddle and slide guitar elements link the track to 1970s-sounding country and Yola’s vocals are equally playful and serious. “Love All Night (Work All Day)”, released as a single ahead of the album, features similar playfulness alongside a catchy, inviting tune.

Title track “Walk Through Fire” holds a classic country style and range, with strong imagery and emotional delivery. Religious symbolism and feeling exemplify the personal decision and loss at the heart of Yola’s lyrics in the song. Pain and uncertainty are imminent in a literal “walking through fire” and confronting disaster during the end of a destructive relationship. Yola continues the feelings of loss and departure on “Lonely the Night”, confronting unfulfilled wishes and broken hearts. The unknown of loss and emotional pain is strong in these tracks, with Yola’s vocals deliberating delivering the yearn for missed opportunities as the music builds intensity.

The strongest track on the album and the one that resoundingly documents the wealth of stylistic cues working on Walk Through Fire is “Rock Me Gently”. The song is a soaring and dominant performance, it flashes instrumentation both modern and vintage, while Yola’s lyrics explore the emotional turmoil of memory, falling asleep, and feeling secure. It’s a nursery rhyme recorded perfectly, and with the background and long career, Yola carries into the debut of Walk Through Fire (she’s 35) the song is beautiful and represents much. Listening to it brings you to her, and Yola is ready to care and comfort you as a friend, listener, and fellow traveler in the universe. The song effectively transcends a definition as a pop song on a pop album and imbues character and faith with Yola.

Walk Through Fire was written and recorded by Yola and Auerbach at his Easy Eye Sound studio in Nashville. Auerbach put together a band for the album that included session musicians like bassist Dave Roe, drummer Gene Chrisman, and pianist Bobby Wood. As a team, these musicians, Yola, and Auerbach provide the album a generous musical depth, from strong melodies and complimentary instrumental parts to soft and professional performances. These qualities are eminently audible on the track “Still Gone”, with an endearing piano melody, persistent percussion, and altogether collaborative track that pushes no single component to the fore. Yola’s vocals are most clearly mixed in range with the instrumental performances on this track rather than other sections where they are mixed for volume or more recognizable emotional impact.

“I’ve been waiting for a long time for the right time to tell you…” opens the penultimate track “Keep Me Here” on Walk Through Fire, and the journey represented for the album and started by these lyrics invokes the overall strength and relevance of Yola’s album in the pop market. Vince Gill appears on the track, imparting even more country resonance for the journey taken. The album is altogether catchy and enjoyable, and Yola has a mystical and inviting spirit to her voice complimented with the music she, Auerbach, and the Easy Eye musicians weaved.