Before he earned his Wings, by which we mean the 1927 film that won a Best Picture Oscar at the very first Academy Awards ceremony, director William Wellman had to prove he could handle ambitious, sophisticated entertainment. That test was the critical and popular success, You Never Know Women (1926), now on DVD and Blu-ray from Kino Lorber.

On a commentary track, William Wellman, Jr. explains his father’s career at that point. He’d made several low-budget westerns and comedies, and producer Jesse Lasky, Jr. had faith in his ability to handle a larger project on time and on budget. Adolph Zukor, Lasky’s partner at Paramount, wasn’t so sure, and this silent film became the test.

The plot is a trivial romantic triangle, but what’s done with it continually catches the eye, even both eyes. In the first scene, a woman pedestrian narrowly escapes being crushed by a falling beam during the construction of a building, for this was the era marked by the sudden upthrust of city skyscrapers. Apparently, construction during that era continued through the night, according to this film.

The fainting woman is rescued by an ordinary member of the proletariat working at the site, but a limousine instantly pulls up and from it emerges the smooth-faced, heavy-lidded, top-hatted playboy, Eugene Foster (Lowell Sherman, who specialized in such roles before becoming a director). He must like the look of a helpless woman, especially one as beautiful as Vera Janova (Florence Vidor), because he inserts himself into the proceedings by declaring “I think I can do this sort of thing better than you.”

He appropriates her from the arms of her rescuer to his own so that when she opens her eyes, she believes that he is her rescuer, and she will never learn otherwise for the rest of the picture. So the movie could reasonably be called You Women Never Know, as a prime example of how Hollywood titles often convey the opposite impression of what the story actually demonstrates. Or perhaps it was simply mis-punctuated: You Never Know, Women.

With an expression of thanks, she disentangles herself and proceeds on her way, her broken umbrella now discarded as a flimsy failure of protection. Indeed, there are many things that umbrella can’t protect her from. Her phony rescuer follows her to a theatre and learns that she belongs to a Russian theatrical troupe that Wellman, Jr. identifies with La Chauve-Souris, a real troupe of Russian expatriates that was very popular in Europe and America at this time.

Vera assists magician Ivan Norodin (Clive Brook, a popular heart-throb of the era), who makes moon-eyes at her. Whenever he does so, she puts him off as “being sentimental again” and she believes, in turn, that she loves him “like a brother”. The film’s audience now understands the set-up and needs only settle comfortably and wait for it to play out. The man who clearly deserves Vera, since he’s also Russian and a handsome star, will seethe in the wings (literally) while she wastes time with the rich wastrel until her eyes are finally opened.

This story could have been tedious — as it is in many another movie — except that Wellman had something to prove here, and he proves it. The theatrical element dominates the movie with continual visual interest, and the camerawork of Victor Milner often does its own acrobatics to match it. A lot of footage is devoted to the performances, for which real circus and vaudeville performers were recruited, and we receive a convincing sense of their camaraderie as a tight unit against the regular world. This is an early example of how Wellman liked to focus on working units of people, liked to show how they went about their business, whether they be acrobats, aviators or gangsters.

Wellman’s eye for the catchy composition includes such unusual moments as the wildly swinging camera behind the clown as he balances on barrels that sway over the audience, or the subjective shot through the “V” of the legs of the strong man (Joe Bonomo), while his legs hold up a platform on which Vera poses, as he glimpses his girlfriend (Irma Kornelia) letting herself be wooed by a society toad. The toad is played by an uncredited Eugene Pallette, famous in talkies for his voice like a frog swallowing gravel. 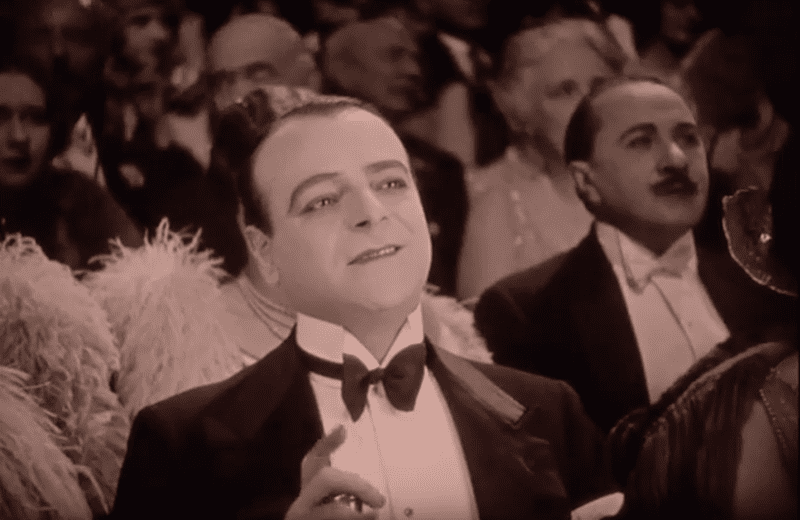 Both the swinging shot and the strong man subplot, which briefly echoes the larger plot, would have reminded audiences of another celebrated film of the day, E.A. Dupont’s Variety (1925), a German film famous for its swinging and vertiginous trapeze shots. When Wellman, Jr. reads contemporary reviews, several make a point of referring to “the German” influence and at least two specify Variety, for German films had a reputation for their expressive visual panache.

That clown on the tipping barrels is Toberchik, played by now largely forgotten vaudeville comic El Brendel, who would go on to a major supporting role in Wings and had quite a line in talkies as a Swedish dialect comic who said things like “Yumpin’ Yiminy!” (At one point he was tagged as “America’s Swede-heart”. By the way, he wasn’t Swedish.) His only lingual comedy in this silent film is a gag when he delivers a title card in untranslated Russian.

His character type is the Fool who gets to speak the truth, spelling out the obvious for Vera. More importantly and subtly, we gather that he’s possibly in love with Ivan himself, to judge by the way he gazes soulfully into Ivan’s eyes, follows his every movement, and casts annoyed glances at Vera. If you think this is unlikely, you haven’t seen the intense bromance of Wings.

Toberchik’s two devices are a flute and a brilliantly trained glasses-wearing goose who’s his constant companion — more wings! Both clown and goose see all, know it all, and are constantly watching. They even kiss, implying that the clown is a “silly goose” or perhaps an “odd duck”. He uses his flute as commentary to “goose” characters musically, which is a gift for composers like Donald Sosin, who provides the effective score on this Blu-ray.

The last act flirts with melodrama, evoking the threats of death and rape with enough conviction to make us wonder whether, like quicksilver, this scenario hasn’t flashed from comedy to tragedy. Welllman has made elegant use of shadows to convey serious issues before, and uses them here again with a final flourish, and in so doing reminds us that we’ve been watching a fabrication set in a theatre. The theatre has briefly become a prison and a place of menace, but those who understand its ways can, as the cad remarks, “get the point”. 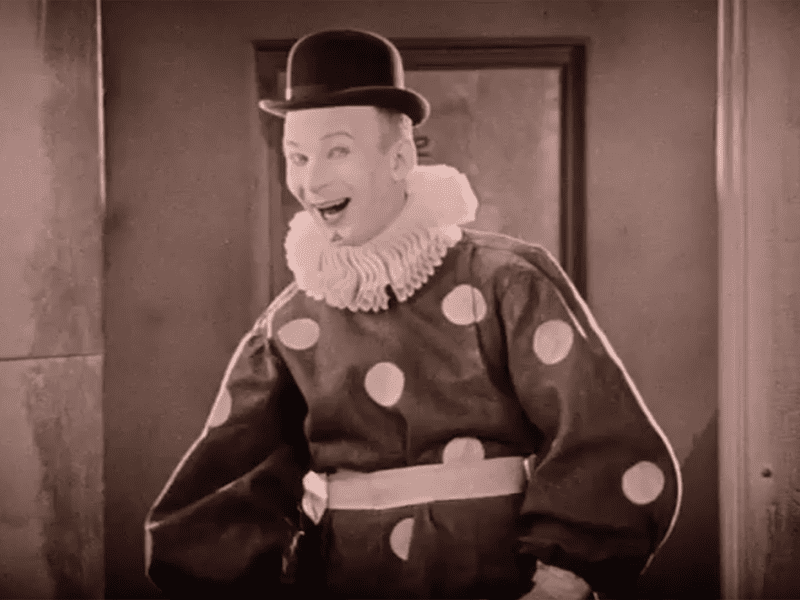 We haven’t even mentioned the magic acts, which include two impressive visual tricks (one involving wings!) and a Houdini escape routine. The Ernest Vajda story used as a source is called The Great Illusion, which might have been a better title for this film, as illusion is really the story’s theme, whether theatrical or personal, and unifies the characters as they fool each other and themselves. Vajda worked a lot with Ernst Lubitsch, and this story exhibits that Continental flair, although Wellman handles it in a way that feels more vigorously American. The scenario is by Benjamin Glazer, another prominent sophisticate associated with European stories.

Florence Vidor came to Hollywood in 1915 with her husband, King Vidor, and established herself as a famous actress well before he became a famous director. Ironically for a Texas gal, her bread and butter was exactly the sort of Europeanized soufflés of which You Never Know Women is an example. Others are Lubitsch’s The Marriage Circle (1924) and Malcolm St. Clair’s Are Parents People? (1925) and The Grand Duchess and the Waiter (1926), all saucy sophistications and none, alas, on Blu-ray. By the time she made this film, Vidor had recently divorced and was embarking on a 20-year marriage to violinist Jascha Heifetz.

She’s not well-known today because she retired when talkies came in and because, while beautiful and expressive, she doesn’t “radiate” on the screen (like Greta Garbo or Louise Brooks, for example) and her types of roles have fallen out of fashion. Although nominally at the center of the plot and the title in this film, she’s the object around which other forces move rather than the prime mover herself. She’s always waking up on the wrong fellow’s shoulder, if you will, and the dialogue blames her for it. Today, we tend to admire those heroines, such as Clara Bow (who would be in Wings), Mary Pickford, Marion Davies and Lillian Gish, who show more spunk. By the way, those actresses often took control of their careers.

In keeping with spunk, Vidor might be rediscovered if presented in sparkling restorations of her 1921 success Hail the Woman, directed by John Griffith Wray for producer Thomas Ince, in which she plays a defiant daughter of an overbearing father and exposes her minister brother’s peccadilloes, or Lambert Hillyer’s Civil War drama Barbara Frietchie (1924). She’s a plucky heroine opposite Sessue Hayakawa in William C. DeMille’s The Secret Game (1917), which has only been on the long out-of-print DVD World War I Films of the Silent Era. There is still a lot of work to do in silent film restoration.

Wellman’s commentary is at its best when he’s speaking personally of his father; otherwise he reads aloud from Wikipedia. The beautiful tinted print, which makes much use of violet, is a continual pleasure to the eye with the faint evanescent threat of deterioration flashing occasionally on the left of the image, especially in the title cards and towards the end. What remains and what’s revealed by the legerdemain of Hollywood is how an insubstantial plot of misdirections can be so well directed that even though we think we know all the tricks, the illusions still delight us. 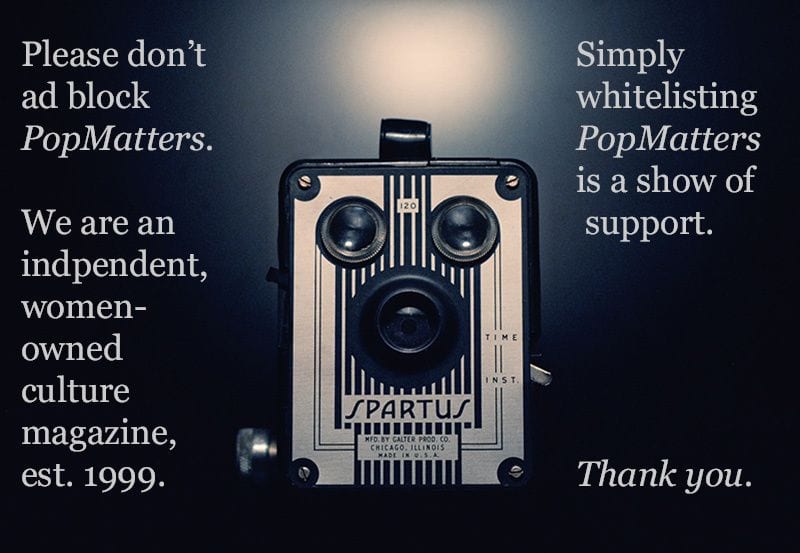