There are few Japanese authors as well known in the West as Yukio Mishima, so English-language readers might be surprised at how much of his work remains to be translated. His output was mind-boggling: one count puts it at 34 novels, at least 25 collections of short stories, 35 essay collections, and 50 plays. Give or take. And all by the age of 45. He also directed and starred in films and theatre.

Much of this work remains to be translated. The latest is Star — a work of short fiction, originally published in a short story collection in Japanese in 1961 and now available as a stand-alone novella translated for the first time to English by Sam Bett. An enjoyable read by any measure, Star offers intriguing insights into the personality of its creator.

From his early youth, Mishima was determined to be a writer, and success came to him quickly (perhaps too quickly — by his 40s he was already seeking distance from his literary persona). His father sternly disapproved and this forced him to hide his writing until he had achieved sufficient success (it didn’t take long) for even his father to grudgingly accept his chosen vocation. For a writer who splayed his innermost experiences on the page (his early, controversial 1949 classic, Confessions of a Mask, is a partly autobiographical novel which explores the protagonist’s struggle with repressed homosexuality), he was also a deeply complex, private individual. He struggled with the various identities he assumed over the course of his life: writer and poet, avant-garde aesthete, nihilist, right-wing fascist, classicist, body-builder, garish movie star, ascetic samurai, lover of all things western (when they were novelties), rejecter of western influence (when it became more widespread). It was as though much of his life was a quest for an authentic identity to which he could adhere.

He struggled, no doubt, from the affliction which plagues all good writers: the ability to observe life from all its facets, to grasp all its various conflicting and contradictory elements and the subjective realities behind them, and to realize that this enlightened power of observation strips life itself of any fundamental, objective truths. His quest for an objective, authentic identity finally assumed fatal proportions: he found, or convinced himself he had found, the camaraderie he sought in a nationalist militia he created and upon which he projected romantic samurai ideals. When it became clear the rising tension between left and right wing forces in his country would not in fact erupt into revolution or civil war as he’d expected (and maybe hoped), he took matters into his own hands. He staged a farcical occupation of a Japanese Self-Defence Forces base, delivered a final speech, and then performed seppuku, a form of Japanese ritual suicide.

Marguerite Yourcenar, in her 1986 paean Mishima: A Vision of the Void (University of Chicago Press), highlights the conceptual distinction between the writer (“who by definition expresses himself in his books”), the individual (“manifold, contradictory, and changeable, hidden in some places and visible in others”) and the persona (“that reflection or shadow which sometimes the man himself… projects as a defense or out of bravado, but behind which the human being of flesh and blood lived and died in that impenetrable mystery which is part of every life”). It is a distinction which applies palpably to Mishima, a complex character whom scholars and readers still struggle to understand.

“The chances of misinterpretation are many…the central reality must be sought in the writer’s work: it is what the writer chose to write, or was compelled to write, that finally matters,” Yourcenar argues.

Much of Mishima’s work is a reflection, in different forms, of his efforts to grapple with his various demons, and in particular his quest for a sense of authenticity. This emerged in early years through an affiliation with Greco-Roman classicism, which morphed further into an obsession with body-building. Unable to reconcile his sense of identity to any discrete faith, politics, or ideology, he became consumed with the desire to control and shape himself, physically as much as career-wise. Eventually, his obsession with the ability to control and shape his physical body no longer produced the satisfaction it once did, and he moved on to a destructive, compulsive right-wing politics as a sort of end run toward suicidiality.

His struggle to ride that thin psychological balance between finding a way to live authentically and dealing with the all-consuming obsession with how he was perceived by others is reflected in much of his literature, and Star is no exception. It also draws heavily on his obsession with physicality and the body. It focuses ostensibly on fictional dreamboat movie star Rikio Mizuno. Despite being the object of desire of an obsessive female fan-base, Rikio is carrying on a casual affair with his physically unexceptional makeup artist and assistant, Kayo. Yet, as with much of Mishima’s work, both the movie star as well as the makeup artist he’s carrying on an affair with representing aspects of Mishima’s dueling personalities and the deep-seated repressions that shaped them.

These glimpses of his tortured inner self emerge around the edges of Mishima’s engaging, finely wrought narrative. Rikio finds himself compulsively drawn to Kayo’s silver teeth. They’re beautiful as the moon, but an honest beauty is something Rikio finds frightening: “Sometimes I had to touch them, to be sure of what they were, and felt better confirming they were fakes…If the moon were actually silver, these could be pieces of the real thing. But fakes were what I really wanted.”

Mishima, who carefully cultivated a certain dark and dangerous, albeit flamboyantly exhibitionist, outrageousness as part of his persona, writes “She boasted of her flaws as if they were assets, but Kayo would never tell you being ugly made her safe.” Well, writers draw on what they know.

Rikio himself carefully cultivates a “backstory of violence” to titillate his fans (much like Mishima himself). Yet, in reality – and again like Mishima, who led a sheltered and overprotected childhood – “I’d been a shy kid. All I did was draw. I never came close to fighting anybody. Instead of gambling with the other kids, I chose the blue sky…Looking back, I can say that loving nature was an error. Not seeing my affection for the weakness that it was, I put a stain upon my youth.” 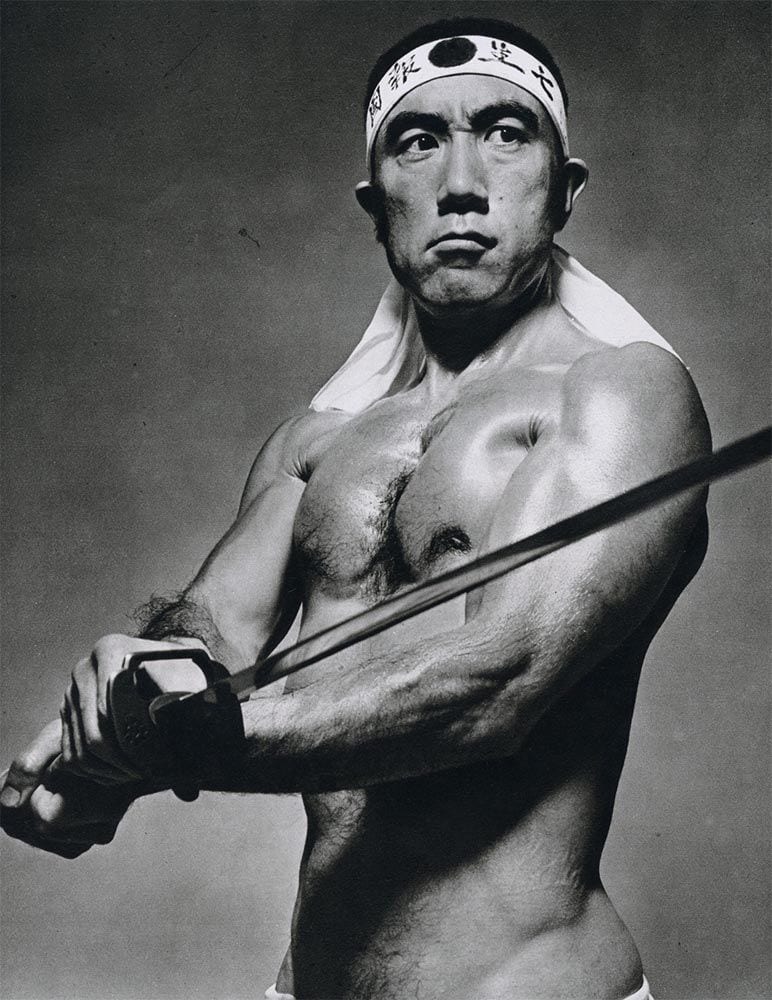 It is Kayo’s authenticity that draws Rikio to her – she’s unabashedly open and honest about her age, about her physical “flaws”; she jokes and laughs freely at the flirtations in which he engages and the flamboyant sexual escapades with which he regales magazine interviewers. She even keeps a scrapbook of photos of him and his ‘girlfriends’. Her up-front honesty is contrasted against his inauthenticity. He’s all image, even to the point of skipping parties: “If anticipating my arrival was a part of the festivities, then surely my absence was part of the feast. That’s right. It’s better for a star to be completely absent. No matter how serious the obligation, a star is more of a star if he never arrives. Absence is his forte. The question of whether he’ll show up gives the event a ceaseless undercurrent of suspense. But a true star never arrives. Showing up is for second-rate actors who need to seek attention.”

As his latest film project progresses, Rikio’s otherwise hollow, blasé existence is punctuated by unexpected episodes. An aspiring actress ambushes him on set. She is sufficiently provocative to persuade the director to write her into the script, but having succeeded in her bold gamble, she then loses the animated drive which originally impressed him. She’s cut from the script again, attempts suicide, and is then rescued in a dramatic scene – a scene which once more impresses the cynical Rikio with its authenticity. Rikio has become so consumed with his acting – with the masks he wears as an actor – that he desperately seeks the authenticity which manifests in these moments. It is the unexpected, the tragic, the desperate, which produces the authentic life he so urgently seeks.

When he’s out shopping, he sees a man get arrested for shoplifting. “When they arrested him, the crowd cheered and our eyes met. His face was in agony. At that moment, it felt like this middle-aged man and I were pulled loose from reality…like a rose being plucked down to its stem, the world tore back before my eyes and showed me its interior.”

Rikio also sees himself, 20 years older, in this man. It’s a sentiment repeated when he runs into one of his mentors – “the original lady killer” – now grown old, at the barbershop. Both instances remind him of his mortality and evaporating youth. Yet, his reaction is ambivalent. Aging seems to both frighten and excite him, for he realizes his helplessness in the face of it. As the perceptive reader realizes, he surrounds himself with things that are fake because reality is something that he both fears yet also craves. His inauthenticity stems from his inability to overcome this fear and embrace the things he really wants (including the realization that he loves Kayo). His own aging self, however, is the one thing he will be unable to fake. Or can he?

“Even when you’re sixty, I’m still going to call you my handsome prince,” Kayo reassures him, staving off the inevitable once more.

Star is an engaging read, an existential novella carried by Mishima’s characteristically engaging prose (“The fans were relentless…more or less my age, young and spunky, broke and bored, and flaunting a doomed surplus of energy.”) If the story doesn’t seem to reach any conclusions, it’s probably because Mishima himself hadn’t yet reached any, and (as with many of his stories) was trying to work them out through his writing. Star is a fine addition to this collection, and will hopefully spark the interest necessary to get more of Mishima’s important oeuvre into translation as well.