Two hours before the doors opened at Denver’s Fillmore Auditorium for a headlining show by electropop priestess Banks, a substantial line started snaking down Clarkson Street in anticipation of her first headlining tour in two years.

Just five days later, Swedish pop starlet Zara Larsson was headlining for the first time in Colorado at the cozy but cool (and far more aurally pleasing) Gothic Theatre. Several miles south on Broadway, only a handful of patrons huddled near the box office just minutes before they were let inside.

That popularity gauge wasn’t the only striking difference between the two triple-threat pop performers, whose styles, stage settings, and setlists are as varied as day and night, light and dark. Yet the intense enthusiasm shown by the fans who did arrive — no matter the size of the venue — proves there’s room for both at the top of the pop peak in the Mile High City.

Only 21 years old, Larsson won a TV talent show at age 10 but is still considered the new kid on the block, brimming with potential, energy and a sunny disposition as flashy as the brightly colored, off-the-shoulders top the Scandinavian beauty wore at the Gothic on 24 September for her “Don’t Worry Bout Me” mini-tour stop.

As perky as Legally Blonde-era Reese Witherspoon, it didn’t matter to the appealing, charming entertainer with the potent pipes (Sweden’s Maren Morris, anybody?) that the balcony section in the 1,100-capacity venue was closed off. Even if it was because the demand for tickets didn’t reach the level of interest shown by a devoted — and quite young — following of about 300 (according to a theater employee) that packed the main floor.

Another worker at the merch table who identified herself as Heather put Larsson’s rising-star stature into perspective minutes before Denver singer-songwriter YaSi opened the show.

“It’s nice to see someone like her in the Gothic’s intimate setting,” Heather said of Larsson, who supported Ed Sheeran at stadium shows this summer with only one full-length studio album, 2017’s So Good, under her belt. “Because it won’t be long before Zara will start filling up the (17,000-seat capacity) Pepsi Center.” 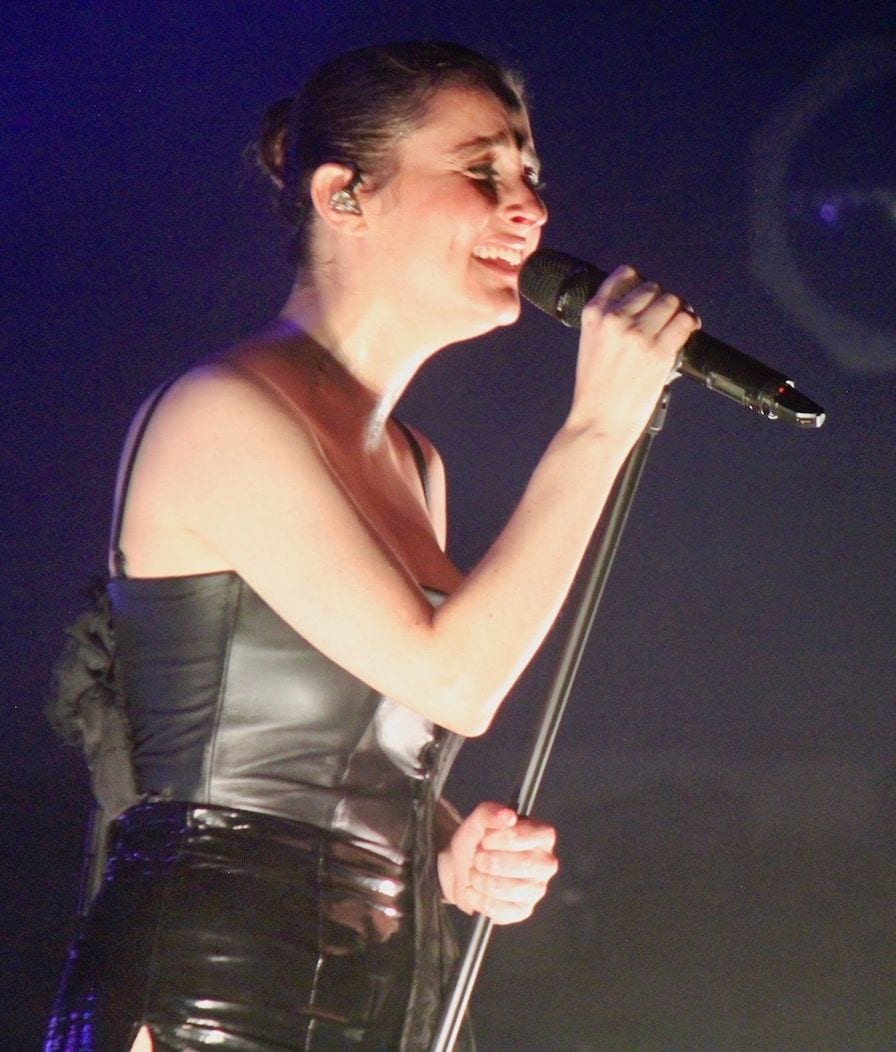 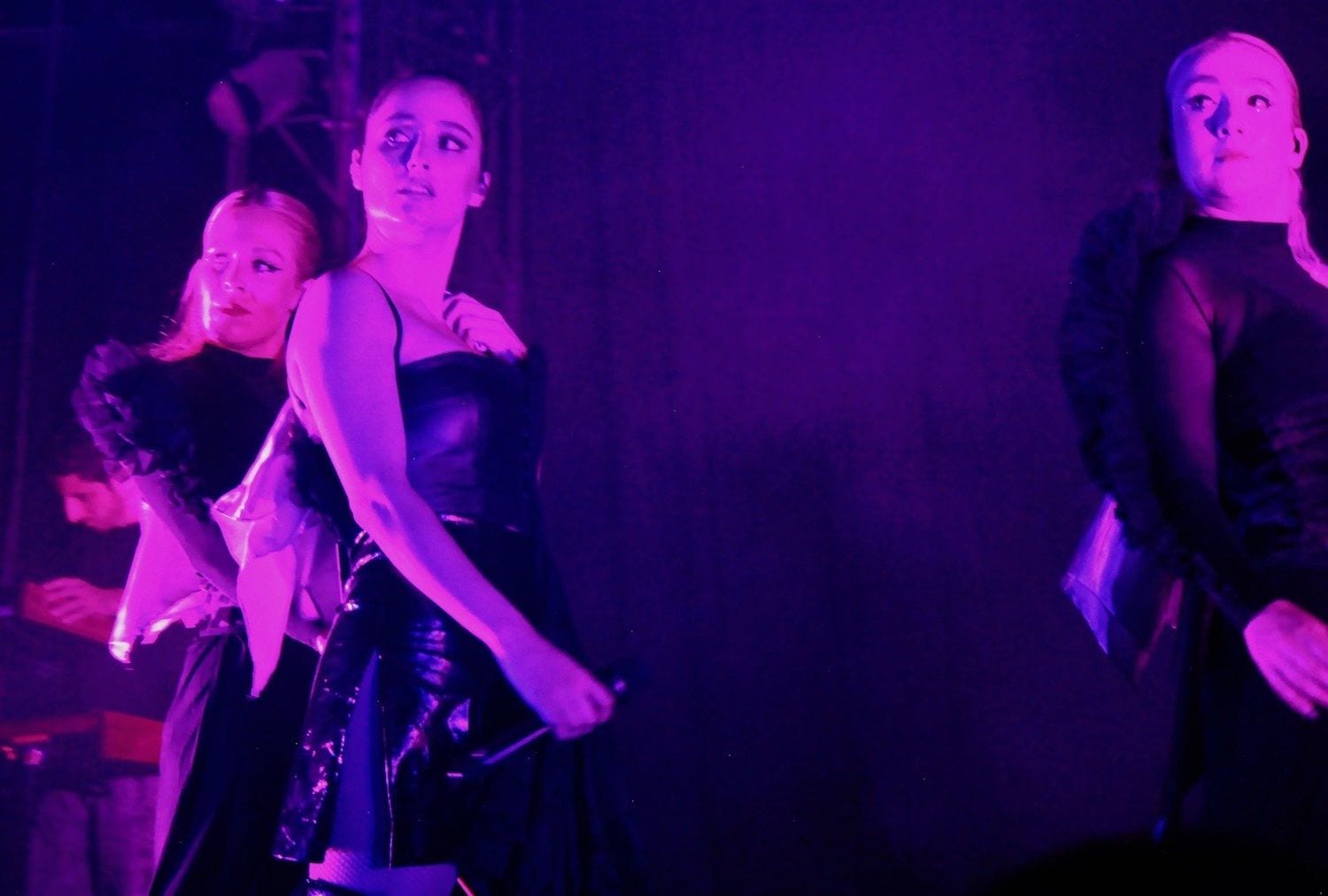 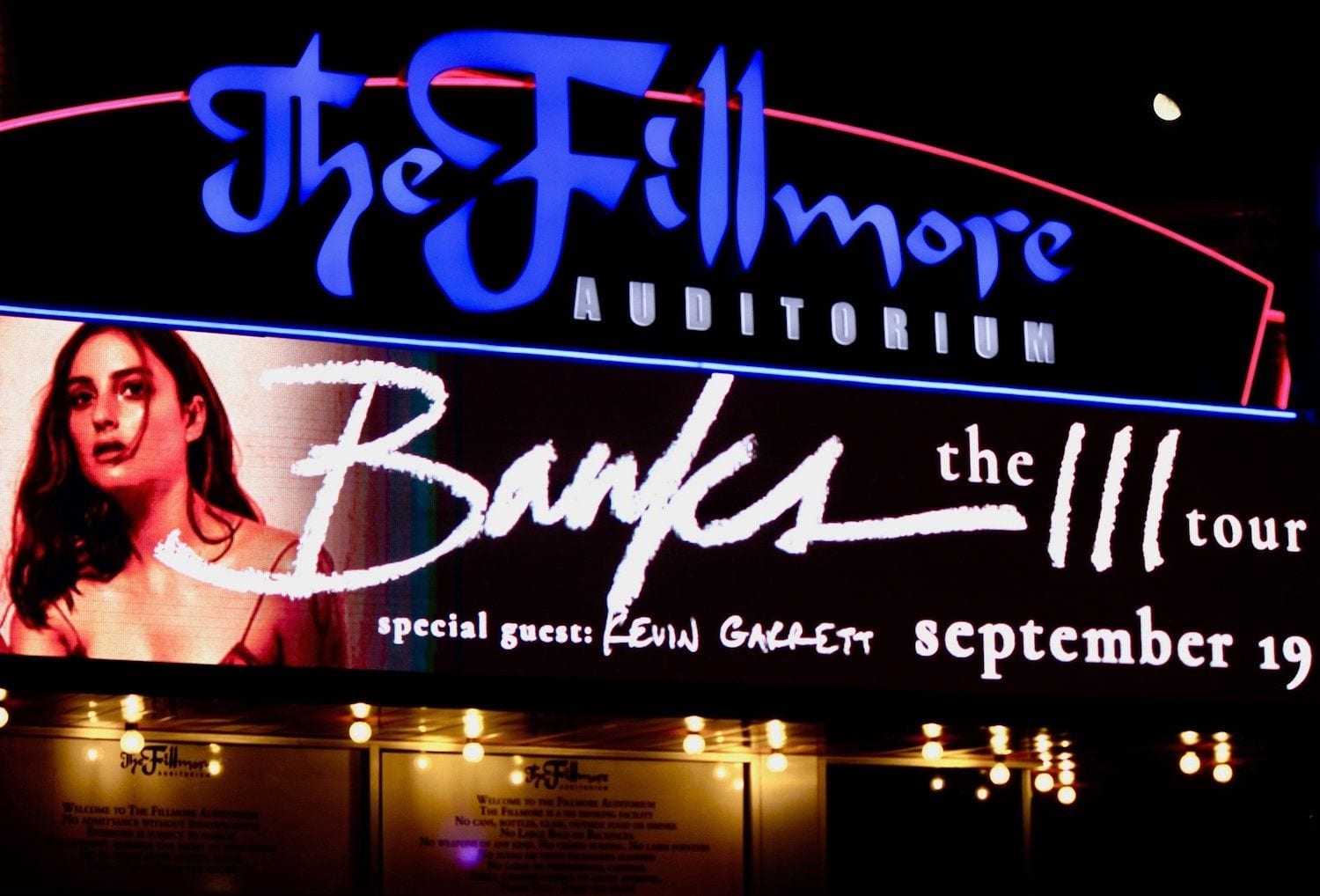 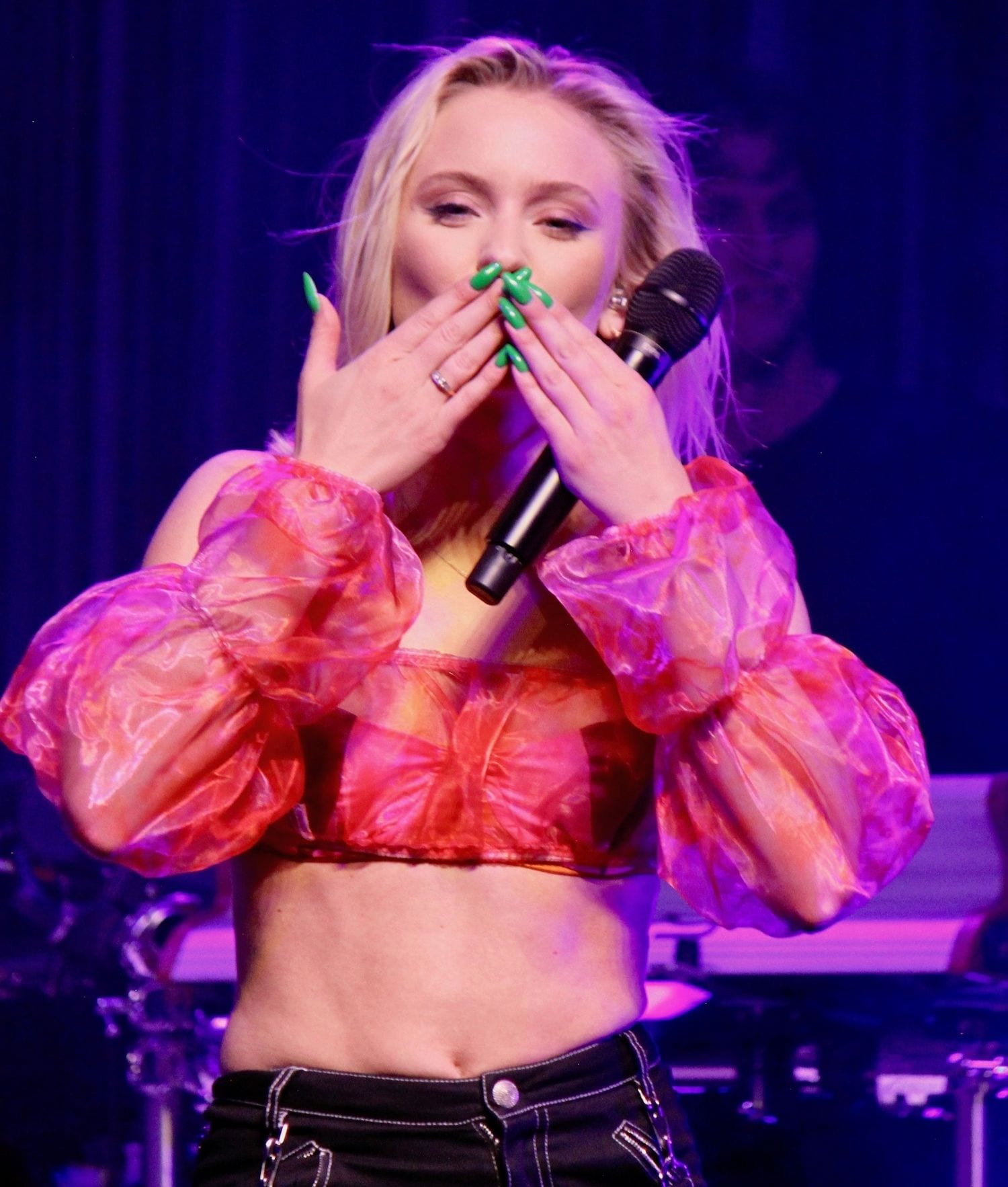 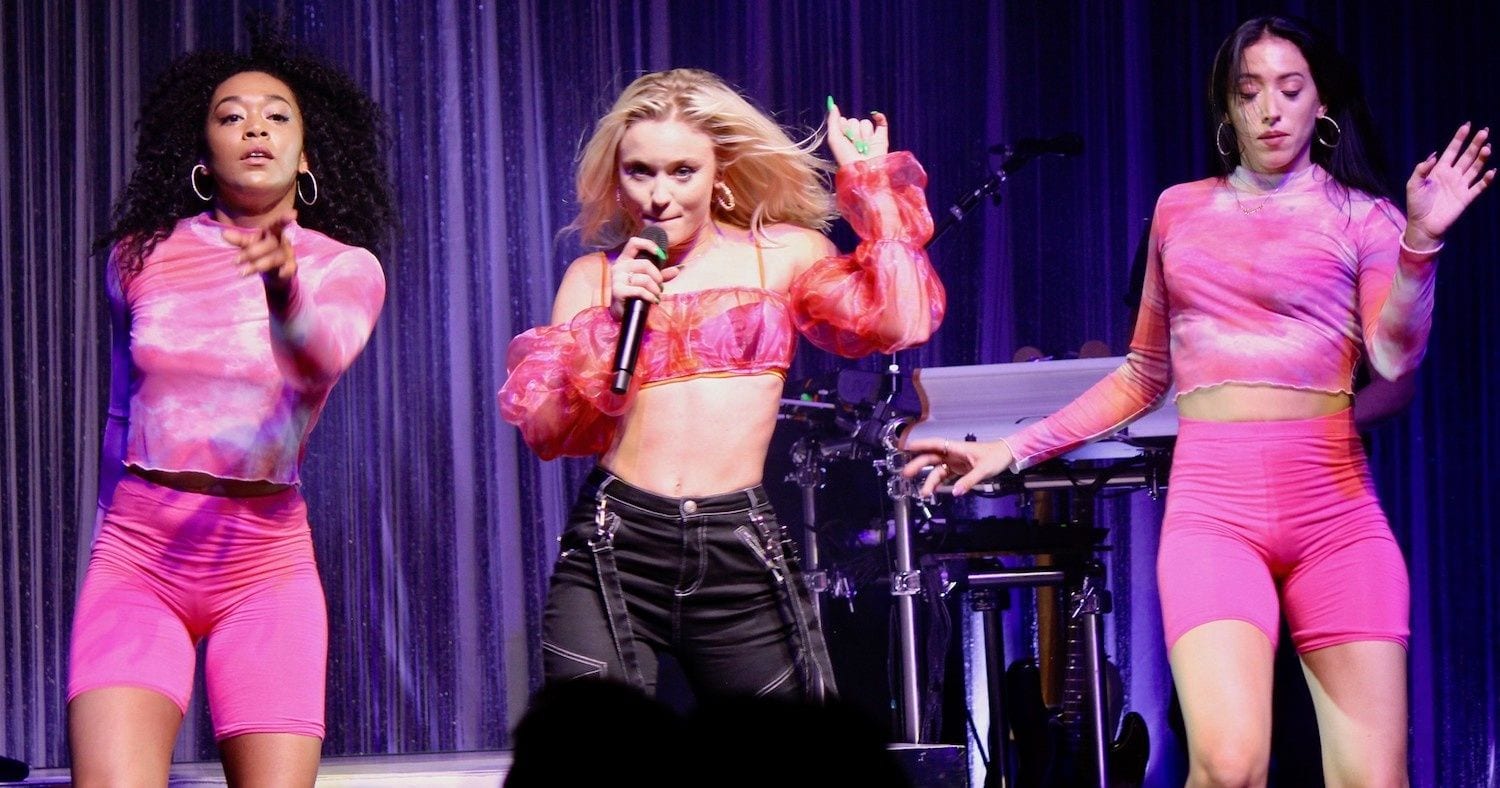 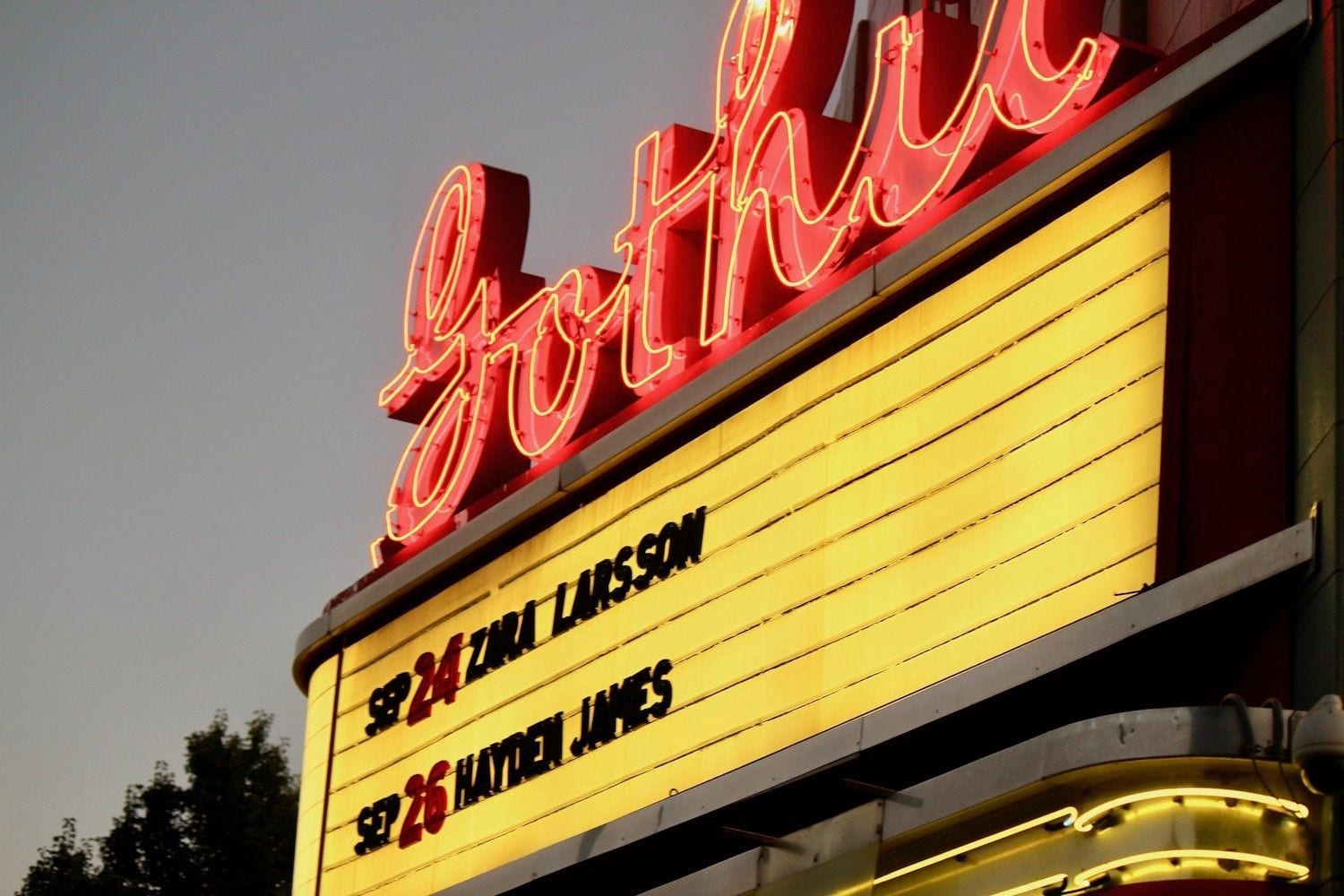 With opening act (and “Contaminated” co-writer) Kevin Garrett, Banks, 31, drew quite a crowd to the Fillmore on 19 September for the III tour (the stale Roman numeral designation for her far edgier third album released in July). But the number of tickets sold (estimated at 2,000 by will call personnel) came nowhere close to filling the midsized hall’s massive seating capacity of 3,700. Still, the Los Angeles-based performance artist known professionally by only the last of three names listed on her Wikipedia page seemed to show genuine affection for those in attendance, including one person in particular.

With a stage act including songs from three full-length studio albums as dark as her perceived image, Banks, brunette hair wrapped in a bun while wearing black leather, lace, and shiny, thigh-high boots, greeted the audience warmly five songs into her act. “How you guys, doing?” she asked a cheering throng. “It’s such an honor to be here. I kind of feel like Denver’s my second home because my dad (James) moved here.” He also happened to be in the audience, bringing along a small cheering section.

While the shows included the standard crowd singalong encouragement and front-row handshakes, they were distinct and appreciated in many other ways, and are worth catching when the esteemed song-and-dance women come to your town. But as a basis of comparison while hoping to reveal more about the performers and their performances, here are a few takeaways after seeing the respective showstoppers, both of whom I recently interviewed. (And for the uninitiated, consider this a spoiler alert.)

Banks: “I would say it’s aggressive and soft and feminine and sexy and honest and open and free. And moody and sensitive and tender and harsh and jagged.”

Larsson: “A lot of energy, dancing. I always have so much fun on stage, like, with all the people I’m with. My (four-member) band and my dancers. We’ve known each other for a long time, so it’s definitely a really fun time. The show is kind of like an arena show but (on this mini-tour) in a very small room. You know what I mean? Like, you could just put it on a big stage, and it would look just as nice.”

Banks: Nineteen songs (including two encores) over 79 minutes, beginning with her III-opening “Till Now” and a plea (“I want to hear you fucking sing, Denver!”), then ending with “Beggin for Thread”, from 2014’s Goddess, her debut studio album. The most touching moment might have been the recitation of her poem “Ode to the Grey Zone” after telling her audience, “it helped me a lot when I was writing this album, so maybe it will help some of you guys as well.”

Larsson: Sixteen songs (including two encores, excluding brief bits of “I’ll Take Your Man” and “I Like It”) over 64 minutes, beginning with “Symphony” and ending with “Never Forget You”, two uplifting numbers that appeared as collaborations on the So Good album with Clean Bandit and MNEK, respectively. On a night of heart-pumping physicality, Larsson eventually sat down to dig deep into her past with “Uncover,” which she revealed is “the first song that I ever released and still one of my absolute favorites”. A struggle to get untangled from one of the straps on her black designer slacks was the only snag during an otherwise seamless performance.

Banks: Never a serious dancer until after she became a professional singer, Banks has credited “incredible choreographer” Nina McNeely for freeing any inhibitions she may have possessed before turning into a sultry seductress onstage. Accompanied frequently during the set by backup dancers Nadine Olmo and Allison Fletcher, the three slithered and quivered across the stage floor, and one of them even locked lips with Banks for a brief, tantalizing moment. But what really raised the temperature to burning-down-the-house extremes were the big beats supplied by drummer Derek Taylor and keyboardist Ben Darwish on explosive numbers like “Till Now”, “The Fall”, and “Gimme”.

Larsson: More U.S. dates have been added in December, though Larsson keeps trying to finish her follow-up studio album (“I feel like I’m missing like two or three songs,” she told me in September). But on the just-concluded second leg of her mini-tour, her act was downsized from the usual four dancers to only two. Still, their athletic moves and rah-rah spirit made up for lack of numbers during moments of heavy-breathing, Jazzercise-like movements and propulsive gyrations in the set’s second half. Worthy of the highlight reel were performances propelling songs such as “So Good”, driven by Larsson’s call-and-response charge and Ty Dolla $ign’s backing track rap; “All the Time”, a successful summer single that Larsson said will be on her new album; and “Ain’t My Fault”, the encore anthem that was preceded by a brief booty call while covering Salt-N-Pepa’s “I’ll Take Your Man,” then supplemented with a carbon-copy Cardi B “I Like It” flourish.

Banks (to 473.5K followers @hernameisBANKS): A pair of professional dancers/choreographers — New York-based Kenichi Kasamatsu and Emma Portner — get a shout-out for their dancing inspiration after making all the right moves in a series of videos celebrating the release of III.

Larsson (to 1.5M followers @zaralarsson): Blessed with the ability to laugh at herself, this Funny Lady often shares or retweets videos that will put a smile on your face, too.

Banks (on her group dynamics): “I think a lot of artists aren’t that close with their dancers. But they’re like … I’m really close with my band and my whole crew. I think it makes, you know, makes touring more fun and it’s who I’m with the most.”

Larsson (on her image): “It’s hard to exist in a world that constantly wants women to look very, very sexy. I guess it’s like different levels to it. Sometimes, I’m like, I don’t shave my legs or my armpits, and then I feel bad about it. … Why?”