Many accomplished musicians complain about the rigors of the road and how they get worn down by the constant travel that can drain the brain of creativity. Don’t include ZZ Ward in their company, though.

While based in Los Angeles for about nine years, the girl born Zsuzsanna Eva Ward on June 2, 1986, has become a blues/hip-pop goddess with prowess who feels blessed to roam her homeland and see the world.

“I feel like I live on a tour bus,” Ward said cheerfully over the phone on June 28, a rare off day in L.A. before heading out for more concert dates. “For me to be able to get to see most of the country and wide open spaces, it’s good for me and my whole aura because in L.A., I don’t have to be here too long. Not long enough that I’d get too sick of it,” she added with a laugh. 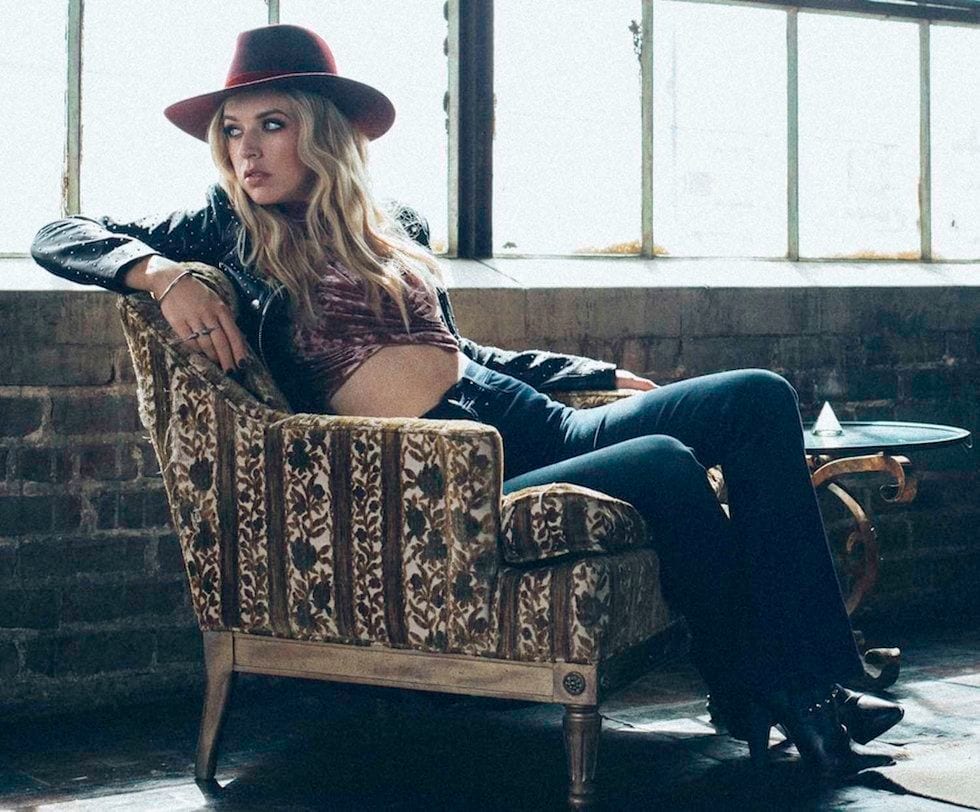 It’s no wonder then that the nomadic singer-songwriter seems like the perfect representative for the Ride Festival, which will take place July 14-15 in the majestic southwest Colorado town of Telluride. “Have Guitars, Will Travel”, could be the carrying card for a positive, empowering woman who sounds like vacations are unnecessary just because she loves what she does.

When there’s a chance to take a break, Ward isn’t sure there’s an easy answer to a question about how she has fun during her free time. “I don’t know,” she said after a long pause. “I think that my job is pretty fun. Making music is pretty fun. … If I’m not on the road, I’m writing for a new album and I’m passionate about it, so I love it. There’s nothing I really enjoy that much more.”

Constantly writing and spending time in the studio when she isn’t performing live, Ward is already working on her third major release, though The Storm (Hollywood Records), her most recent full-length record that hit No. 1 on the Billboard blues albums chart in July 2017, just turned a year old.

“That’s the thing when you do music,” reiterating her point just in case there are disbelievers or doubters out there. “I think that (laughs) it is a pretty fun job, so it’s kind of hard to find other things that are as great as being able to be onstage and sharing your stories with people. I mean, I like going to the movies and stuff, but it’s not as exhilarating.” (laughs)

So Ward, who married record producer and singer-songwriter Evan Bogart in May 2017, doesn’t sound the least bit jaded when discussing pleasurable festival experiences at Bonnaroo, Coachella and Firefly. Calling them all “really amazing moments,” she later admittedly geeked out about seeing one specific performer who has become “super-inspiring” to her.

Before that, though, Ward was eager to discuss the return to what has become her favorite tour stop, earning that distinction after one visit five years ago. “I didn’t know what to expect, but I was pleasantly surprised because it is gorgeous there,” she said. “I was like, ‘Wow, a little piece of heaven.’ People were walking around with their dogs off leash and it’s just like everybody is, and it looks like the Swiss Alps or something. Really looking forward to going back there.” 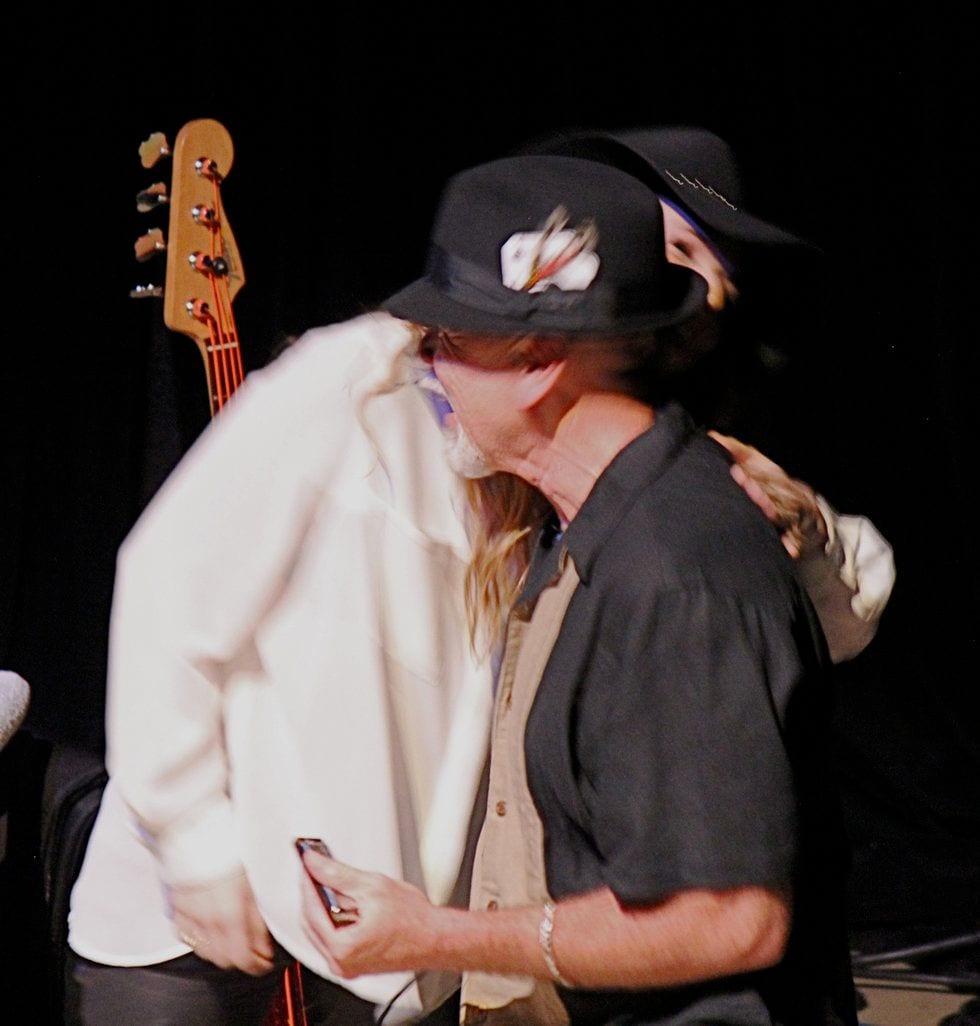 It won’t take three guesses to figure out that Ward was describing Telluride, where she played the Blues and Brews Festival in September 2013. That was just a couple of days before I finally had a chance to see her perform at the Ogden Theatre in Denver, where her harmonica-playing dad made a guest appearance. Chuck Ward, affectionately called “DW” (for Daddy Ward) by ZZ during that show, enlisted his daughter to play in his band when she was 12 and growing up in Roseburg, Oregon, a small town with an elevation of 465 feet.

Denver, while soaring a mile high (5,280 feet), still comes up short when compared to Telluride, which ups the ante to 8,750 feet. So ZZ Ward, who also opened for Amos Lee at Red Rocks in Colorado and dreams of headlining there, isn’t shy about asking for help to deal with the altitude.

“I didn’t use to [need help] but now I’m more conscious of it because I’ve gotten sick a couple times, usually after I play,” Ward said. “So whenever I’m in Colorado, I get those little bottles of oxygen and I just make sure to treat myself to a little extra oxygen when I can. (laughs) The most important thing to me is giving a great show and, you know, I’m gonna do whatever I have to do to make sure that I’m hitting all those notes and just hitting every cue.” 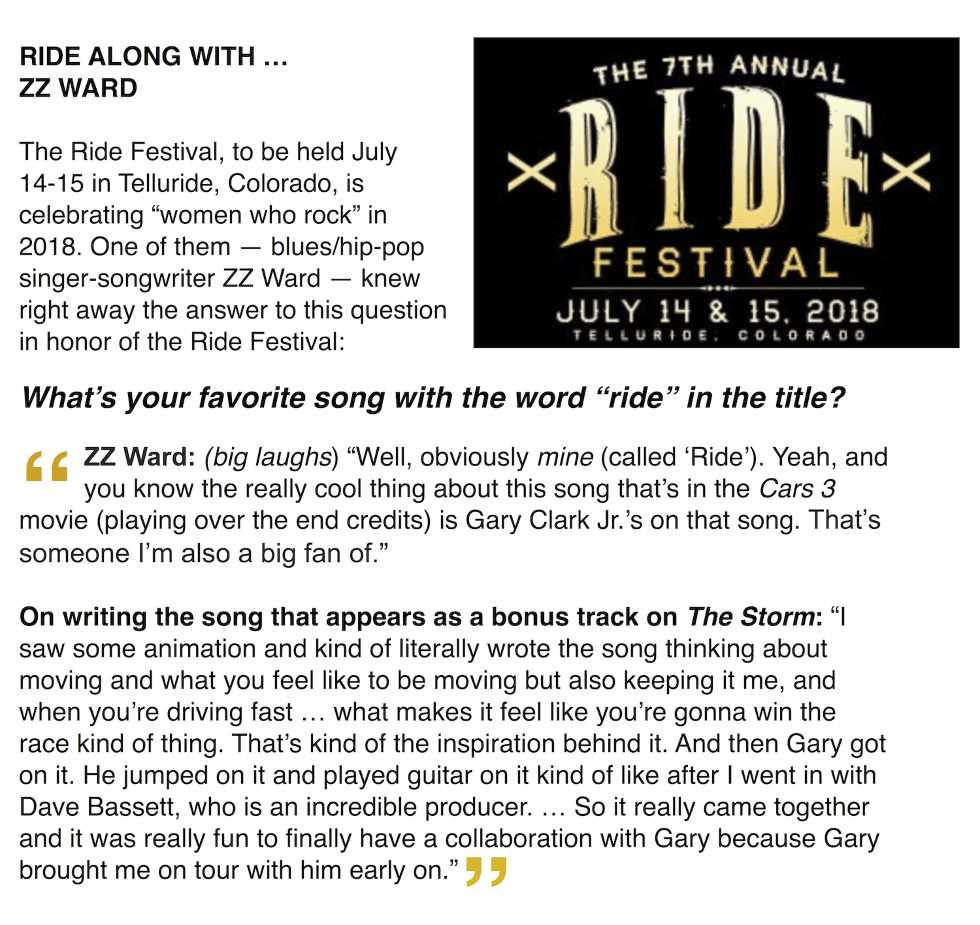 Ward even has a bonus track on The Storm that could serve as the theme song for this year’s festival. Written for the soundtrack to the animated Disney film Cars 3, Ward promised to play “Ride” at the Ride Festival (see more in above graphic and poll below).

As mentioned in last week’s story on the New Respects, the first in a series about musicians scheduled to perform at the Ride Festival, this year’s theme recognizes “Women Who Rock,” and Ward couldn’t be more delighted. Plus, she’s had the New Respects open for her and said, “I think those girls (twins Zandy and Lexi Fitzgerald and their cousin Jasmine Mullen) are great. I think that family’s great. I really love what they do and they have a really promising future.”

Asked what she thought about playing such a major role in that Ride Festival celebration, Ward proudly said, “I think it feels good. (laughs) I’ll take it. I’m very excited to be a woman out there on the road doing this. I think that there’s a lot of us now doing this out there. And I think it’s great.

On the way to becoming an established artist, Ward had to disregard those who tried to discourage a small-town girl from following her dreams.

“There are definitely moments early in my career where I was like, ‘I’m gonna be a recording artist.’ And people are like, ‘You’re crazy. Go get a normal job. Like what are you talking about?’ And then you’re just like, ‘You don’t understand. This is what I have to do,’ ” Ward recalled with a laugh.

“You really have to believe in yourself before anybody else will believe in you,” she added. “And then, I don’t know, I guess I’ve always kind of played with the boys. I don’t really think about it very much. … There have been very few amount of people in my career that have made me feel like there’s something else going on that has nothing to do with me personally. But maybe that I’m just a woman and there’s a lack of respect. Gosh, I can honestly say in a good way that’s only happened to me maybe once or twice.”

While comfortably playing with the boys, though, Ward remains a supporter of the MeToo movement, and recognizes its importance in helping survivors of sexual violence while bringing attention to women’s rights.

“I think it’s really inspiring, you know,” she said. “I think it’s about time. And I think that we’re all responsible for change in this world from the film industry to the music industry. And I think that hopefully that influence reaches places around this country and helps influence change all around the country that maybe wouldn’t be thought about otherwise if this movement wasn’t going on.” 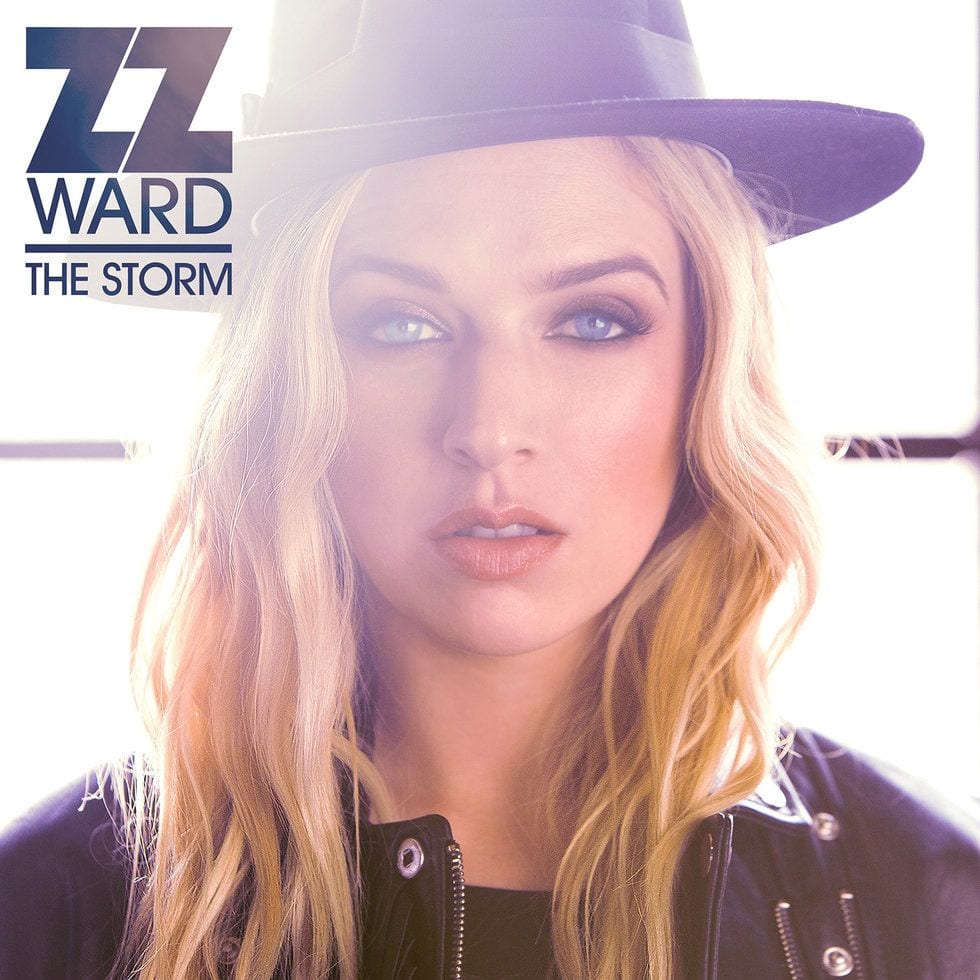 Yet even a kick-ass multi-instrumentalist with an ax to skillfully grind, a sharp harp to handle and the ability to collaborate with Kendrick Lamar and Fantastic Negrito can remain humble enough to become a member of an adoring audience that worships its guitar heroes, as Ward did after seeing Jack White for the first time four years ago.

“I watched him play at Bonnaroo and I loved when he played at Bonnaroo,” said Ward, who was in that same lineup for the 2014 festival southeast of Nashville. “But I was pretty far back, for whatever reason. I think we just kind of stumbled into the show. And it was a different experience. I could see the whole crowd and he was, like, just so killer.”

“I was so close to the stage and I was just like, ‘Oh, my God!’ I was like geeking out,” said Ward, who played at Arroyo Seco last year. “There’s not many artists that, as an artist, you can be a fan of like that. He’s so mysterious. And he’s so, just kind of in his own world that it kind of creates this ambiance around him where, like, I literally am such a fan in the audience watching him. And it was so beastly. His sounds are incredible and his tones are so rich. And he’s so effortless up there, he’s such a creator. So I definitely felt, I mean, as you can tell by how I’m talking about it, that I’m geeking out. I’m so inspired by Jack White. That was definitely a highlight of my year, possibly my life. … He’s definitely, like, one of the most inspiring artists to me right now because I just feel there’s something so fresh about him just doing what he wants to do. And he’s authentic to himself.”

Ward strives to preach the truth as she creates, too, aiming to follow in the footsteps of blues legends she heard telling their stories.

“And there’s nothing fabricated about it,” Ward said. “Very real. And something I always want to happen in my music is that integrity.”

Attracting a fan base that’s just as rabid as she can be must mean The Storm trouper is an honest-to-goodness, heart-full-of-soul sister.

“The most important thing to me is to create authentic music,” Ward said. “You know, write stories that are part of my life and share them with my fans and be able to go out there and play those songs live. And be able to travel and tour and, gosh, I mean I’ve had all that and more with this album. … I definitely wanted to walk the line of blues and my blues influences and kind of taking those inspirations and keeping them fresh and bringing them to a different audience.”

So another tour for Ward and her three-man band — including longtime bass player Shadarius Shields — begins in earnest with a July 13 headlining stop at the Belly Up in Aspen. On the road, she vows to continue setting an example for her fans while dismissing the occasional social media troll who always has “something negative to say.”

“I’m not gonna let someone like that get in my way,” Ward said. “That’s silly.”

Besides, it’s impossible to stop a driving force who has already arrived. 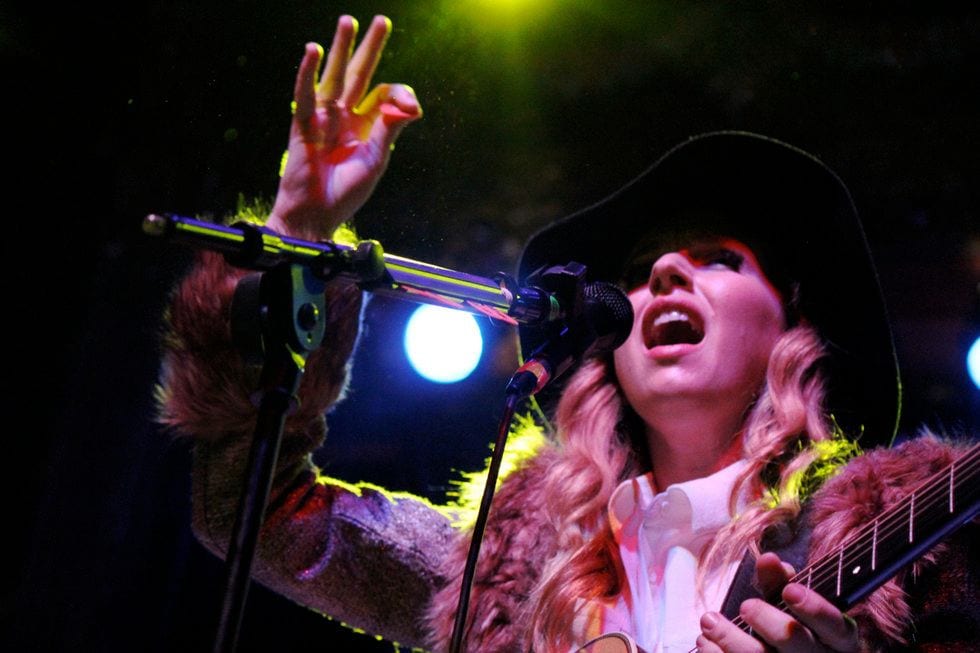 Second in a series previewing artists scheduled to play at the Ride Festival. The New Respects Head for Rarefied Air was published at Pop Matters on June 29.

POLL: What’s your favorite song with the word “ride” in the title? Vote here