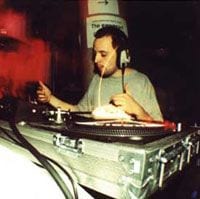 The plush and posh El Rey Theater, a brief walk from the perpetually sinking mammoths of the La Brea tar pits, may be an unlikely location for a showcase from the seminal British electronic label Warp Records. By eschewing the strobes of a cavernous club for the chandeliers of the El Rey, the Warp crew seemed intent on setting themselves apart from the herd. Indeed, a label with a roster including some of the most innovative and exceptional artists in electronic music today should demand a unique environment within which to present themselves. First up, Mira Calix (AKA Chantal Passamonte) delivered a furtive, though brilliant, DJ set. Hidden in the furthest corner of the stage and barely lit by a handful of purple beams, Calix appeared and disappeared from sight as she fed three whirling turntables. Obscured by a makeshift DJ booth, Calix, bulbous headphones a permanent fixture on her head, appeared entirely unconcerned with the space and masses before her. A distorted, trembling hum introduced her entrance. From this quaking, deafening drone unraveled glacial squiggles and dulcet fragments. The progression of noise to sound and, eventually, to polyrhythmic tunes was so fluid that only on close, attentive inspection one realized Calix was merely placing needles on grooves as opposed to composing them herself. Regardless, the entire set was an eclectic assemblage of the finest in IDM [Intelligent Dance Music] — one of the few genres of music to traverse the chasm between the chin-strokers and the shape-throwers. The former, ubiquitous to the experimental/abstract scene, may be called the Intelligence constituent, and the latter, essential to clubs and raves, proudly represent the Dance component. And Calix rendered to both a stimulating, engaging assortment of sonic gems. One of the great aspects of live electronic music, besides the bone-shaking volume, is the speed and efficiency of presentation. Without the arduous, Sisyphean task of tuning and the endless equipment wrangling of roadies, the fabric of sound was never punctured. The London duo Plaid hit the stage immediately as the needle stroked the white label of Calix’s last record. Andy Turner and Ed Handley, both of whom sported identically cropped hair and nondescript T-shirts, performed an hour-plus set from behind a large mixing board flanked by two identical PC laptops. Behind the duo stood a large, square screen that flickered with imagery accompanying the tones and shifts of the music. For the opener a yellow, computerized sky slowly became engulfed with black birds. Later, utopian designs and futurist plans were dissolved into each other. For one number, a steady stream of questions were presented ranging from psychological inquiries — example: “Are you often depressed for no apparent reason?” — to their comedic pastiches — “Are you a slow eater?” Often, Turner and Handley themselves were projected, streaming live in hazy black and white, as they twiddled knobs and adjusted faders. For the show’s closer, the duo’s logo, a skewed cartoon television, flashed repeatedly resembling the last convulsions of a cathode ray. Performing material mostly culled from their latest, and best, LP Double Figure (Warp), the group manifested a proclivity to dance music and further blurred the division between techno and IDM. Yet, compared with Calix’s analog bubblebath, Plaid were a lukewarm digital puddle. Although Turner and Handley made a far greater use of televisual means than Calix, little could make up for their slightly above-average compositions. As their name suggest, Plaid’s music is layered yet uniform. While the songs on their previous LPs — 1998’s Not for Threes and 1999’s Rest Proof Clockwork — blended jazzy instrumentation with granulated loops and MIDI montages, Double Figure recalls the duo’s past as two-thirds of Black Dog Productions. Emerging in the early ’90s, Turner and Handley, along with Ken Downie released a string of club gems and three revered LP’s — 1992’s Bytes, 1993’s Temple of Transparent Balls and 1995’s Spanners — all proving electronic music belonged just as much in the bedroom as it did on the dancefloor. Overall, the Plaid sound is far closer to the controlled hypnosis and sequencer symphonies of Orbital and Sabers of Paradise rather than their more challenging Warp peers, namely the Aphex Twin and Boards of Canada. Indeed, compared to the recent barrage of PowerBook scramblers — SND, Richard Devine, Nobukazu Takemura, Autechre, Oval Plaid are quite conservative and, frankly, complacent. Lacking a unique sonic palette, the group repeat again and again the same coalescence of manipulated bleeps and glitches with mediocre, mimetic drumming. Their greatest strength is the pleasure in the sheer pummeling of heavy beats with precise, syncopated clicks and arpeggiated melodies. This machine-music reached a fever pitch during the encore of “Squance”. Accompanied by barrage of crudely deformed and pixelized images of ’80s pop icons (Adam Ant, Prince, Michael Jackson, Annie Lennox), and vintage videogames (Space Invaders, Pong, Pac Man), Plaid performed their most infectious number. While the computerized personas twitched along to the playful, swirling timbres the audience radiated as the glowsticks came out in full force. Scheduled to follow Plaid, Squarepusher (AKA Tom Jenkinson) bowed out at the last minute for no apparent, or announced, reason. Quite a disappointment, considering his frantic, catatonic disintegration of drums’n’bass would have been a welcome breath of fresh firmament after Plaid’s stuffy atmospherics.