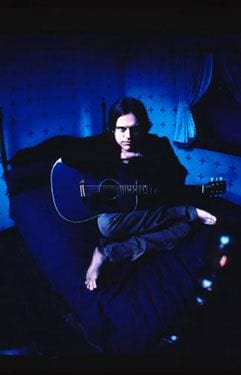 For once, when an artist claimed to be happy to be spending the evening in D.C., the artist sounded wholly sincere, and not just because he apparently toured the White House earlier in the day. Matthew Sweet really enjoys playing D.C., and at the 9:30 Club in particular. I write this because Sweet and his band smiled constantly, waved to fans, and played some 24 songs over a two-hour period this particular Saturday evening. He seemed to enjoy himself the previous two occasions I saw him perform at this club on the Blue Sky on Mars tour as well. A Washington Post reviewer wrote that one of those previous concerts — I can not recall which — was too loud and the songs performed too fast. The reviewer would probably have the same reaction to the this show. In the studio, Sweet carefully constructs his songs, picking an occasional instrument to augment his four-piece poprock sound and making careful production decisions so each song comes across. In concert, Sweet and his band sound like a garage band, or to put it another way, they unleash the ghost of Neil Young’s Crazy Horse that slumbers within. The songs are loud, fast, a little sloppy, and even blur together a bit. Sweet has so many four-minute guitar pop tunes you can be forgiven for turning to your neighbor to ask “what song is this?” Many of these songs address relationship and in concert the songs about relationships come in two forms: fast and slow. Thankfully, the fast and slow songs are all worth hearing. Songs about a relationship ending badly tend to be pulled back to a slower tempo than the album recording. For “Hide” Sweet played the keyboard and mournfully sang: “Now, you’ll have to be / Hurt when you think of me.” When Sweet sang “You Don’t Love Me,” or wallowed in sorrow, wishing there was someone to “pull the trigger,” the songs were weighted with sorrow, though not so much that the show became a somber affair. As mentioned above, most of the set tends to be more up tempo than his albums, with every third or fourth song being a slower number. The show began with the first three tracks from Sweet’s latest release In Reverse and went on to feature seven other songs from that album. “Millennium Blues” is not a great Sweet song, but it worked decently as an opener, with Paul Chastain playing a nicely sloppy trumpet part. The next two songs — “If Time Permits” and “Beware My Love,” — are great poprock songs. Pete Phillip’s guitar work on the latter song sounded close enough to a backwards that I found myself standing on my tiptoes trying to get a peak at how he was pulling it off. I learned nothing from this (but you’re supposed to strain to see the stage at concerts). Sweet introduced the next song as one he has been performing for as long as he has been coming to the 9:30 Club: “Divine Intervention” — the opening track from the popular Girlfriend album. If anyone in the audience remained uninvolved up to this point (likely because of the newer material prior to this song) they seemed fully caught up in this rousing song of spiritual doubt. Foreshadowing more such behavior to come, the band continued the song well past the normal running time and lead guitarist Phillips soloed over the top for a few minutes. The most famous song in the set, and in this artist’s catalog, “Girlfriend,” was given a good kicking which must have lasted six minutes, as did the version of “Sick of Myself.” “Sick of Myself” is a representative Sweet lyric: love mixed with self-loathing. Some of his songs, however, are wholly positive as they describe the comfort of a happy relationship, as does the joyous “I’ve Been Waiting,” with lines like “I didn’t think I’d find you / Perfect in so many ways.” Just as the slower songs seemed more thoughtful, happy songs like this one were even happier. Highlights of the show included Sweet handling the guitar solo on “Into Your Drug” (he plays the solo on the album version too) and the energetic performance of “Evangeline” in the second encore which came perhaps in response to the regular entreaties from the audience. Even better was an impressive performance of the epic, album closing “Thunderstorm” from In Reverse. This song in five sections could serve as a concert in itself. Sweet and rhythm guitarist Chastain harmonized nicely on the second section, “Even From My Eyes,” “Yes” sounded almost apocalyptic before moving into the lighter “Day in the Sun” and finally turning into a reprise of the upbeat first section, also called “Thunderstorm.” By the time the show ended with “Does She Talk?” I had only one request: that Sweet throw in a cover or two. The Move’s “Do Ya” was excellent on the last tour, and he has performed other songs he clearly enjoys like Neil Young’s “Cortez the Killer.” Of course his own stuff can fill an evening for me, though some audience members may not like Sweet’s songs performed fast, loud, and possibly interrupted as someone takes a swig from a bottle of beer. But if you turn up your Sweet CDs a little louder, you’ll realize this music has always been a little messy and rowdy. Listen to that complex lead guitar part played by Robert Quine that comes in just after the intro on “Girlfriend” and watch out for that last line: “I’m never gonna set you free.” This is pop-rock with teeth, and all the better for it.