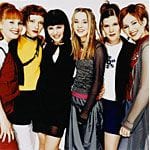 Let me just be the first to say that I am officially floored by Tik N’ Tak. I haven’t been able to take this disc out of my player, and chances are that the youth of America will feel the same way about their debut Friends. You see, Tin N’ Tak are from Finland, their band (yes, an actual BAND) is comprised of six teenage girls aged 14 to 17 who attend the North Helsinki Band School, and they kick some major ass. This, my friends is where the teen pop landscape is going to change if my gut instincts are correct. You say the Backstreet Boys wrote some of their songs? Ha! Step aside, lads. Tik N’ Tak are about to rule your world.

You see, this group isn’t about the show. These young ladies are all about the performance. I went to their website (www.tikntak.com) and checked out a live clip of the band featured there, and was even more impressed by their talent afterwards. Yes, they can really sing. Yes, they can really play. NO, there are no choreographed dance moves and Pepsi commercials. In a dense sea of complete unoriginality, Tik N’ Tak have raised the flag (and the bar) for smart Top 40 pop that proves you don’t have to me all about looks and under Max Martin’s iron fist to produce a hit album in the genre.

Yes, they really are quite young, so prepare to really be amazed. Lead singer Petra has an absolutely beautiful and strong voice that can attack the rock tracks and quickly turn around to handle the love ballads with no trouble whatsoever. And no, she’s not another Christina Aguilera who feels the need to do that ungodly “huhhhhooohhhWHOOAAAAHhhhyeeaahhhhhhuuhhhwhooooaAHHHYeahhhhhhh” every other line to “prove” she can “sing”. And don’t go comparing her to Ms. Spears either, because as I said she can sing. No faux sexual groaning of every syllable here in an attempt to mask zero singing ability. Petra’s got the goods to nail a note down perfectly.

So what about the playing. These girls really do play their instruments? That wasn’t a joke? Not at all. Guitarist Emilia adds pretty acoustic rhythm and melodic counterpoint to Petra’s singing. Her subtle licks in “Anytime” are the perfect touch to an already terrific pop song. Second guitarist Noora provides the electric crunch to the group, wielding a truly rock sound that is a true breath of fresh air to this market (yes, I realize guitars have been used in every other teen pop sensation get-up, but Noora’s tasteful; her guitar actually does anchor the band’s sound rather than come off as a “rawk” gesture on the part of the producers). Keyboardist Nea performs all sorts of melodic and textural wizardry to the performances, and bassist Mimmu and drummer Tuuli create a solid backbeat that isn’t just another drum box and synth combo that offers no life to the songs. In fact, Mimmu’s occasional use of fuzz pedal pretty muck makes me drool every time.

But are the songs any good lyrically, or is this just another album aimed at the kids? Well, these girls are teens, so the songs tend to be about relationships (good and bad), and love. But the general mood of the album is upbeat. And I think that’s really due to these girls being a real performing band, and not just another group of pretty faces ready to hang their talent on a bunch of sappy ballads. The opening “Upside Down (Steve James mix)” is a terrific slab o’ pop that should be a giganto hit, as well as the cautionary “Don’t Turn Back”, a tough little number in which Petra lashes out against a would-be bad boy. Both tunes have had videos shot for them and are viewable on the band’s website. My personal favorites are “Anytime”, “Perfect Girl”, and the quirky power pop of “Move On”. But there is seriously not a dull track amongst the 12 that make up Friends. And this is coming from someone who can’t stand teen pop.

Yet I think this album should easily be enjoyable by people well beyond their teenage years. The kids will definitely eat it up, but I have a feeling that the parents will start humming along as well. But my advice to you is to go out and buy this one if you have kids or not. Tik N’ Tak represent the great difference between American teen idols and Everyone Else’s. Well, at least in this case they do. With a genuine talent, great singing by all involved, and a smart set of songs that should carry these young ladies up the charts in no time at all Friends deserves to be a giant hit. And I truly hope that Tik N’ Tak winds up ruling the radios for a while. If the world can be right only every now and then, then this album should finally quiet ‘N Sync and the rest of their ilk in stunned silence. Buy this one ASAP.