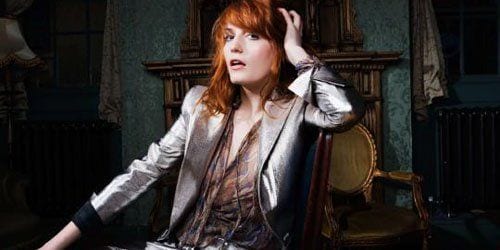 Florence and the Machine
Ceremonials
Universal

If there’s a blueprint for art-scarred eccentrics to follow that outlines how they can aspire to become top-of-the-charts divas who still maintain the quirks that made them distinctive, you could do worse than the one Florence Welch has drawn up. There’s a reason why Florence and the Machine can seem as at ease rubbing shoulders with the haute couture jet set as the band is getting remixed by au courant underground acts like the Weeknd and the xx, and that’s simply because Welch exudes such confidence in her singular aesthetic vision that she can be herself: Following the same muse on her sophomore effort Ceremonials that helped her hit the big time to begin with, Welch is the kind of artist who takes the lead and lets others come along for the ride, rather than simply playing to the whims and trends of the marketplace or banking on gimmickry. As she puts it on “No Light, No Light”, “You can’t choose what stays and what fades away” — a sentiment that actually applies better to the music biz than to romance — so why not stick to your guns and do things on your own terms, especially when you’ve got a track record of making it work?

Elevating their idiosyncratic style to an even grander scale, Ceremonials makes Florence and the Machine’s captivating debut Lungs seem quaint and charming in comparison. As polished and artistically challenging as that first effort was, this latest outing gets the most out of Welch’s strengths as a songwriter by shooting for a higher degree of difficulty and achieving a greater level of proficiency. Go no further than matching up the two standout singles from the respective albums: While her signature hit “Dog Days Are Over” may remain the more indelible number as Florence’s breakthrough song, “Shake It Out” is not only more expansive in its scope, but somehow the catchier anthem as well. Some of that has to do with tone, since the whimsy and insistent optimism of “Dog Days” have given way to the Technicolor melodramatics of “Shake It Out”. But the bigger difference can be attributed to the more ambitious compositional elements incorporated into the latter song: It’s not just that the brisk, gently strummed harp from “Dog Days” has been replaced by an elegiac minor-key organ arrangement on “Shake It Out”, but that Welch and company keep upping the ante each time they cycle through the chorus (“I like to keep my issues strong / It’s always darkest before the dawn”), finally reaching a critical mass of booming percussion and ascendant keyboards that adorns Welch’s soaring singing. So if “Dog Days Are Over” is all about getting past the drama, “Shake It Out” seeks it out headlong, especially when Welch is uttering lines like, “And I am done with my graceless heart / So tonight I’m gonna cut it out and then restart.”

“Shake It Out” isn’t the exception to the rule on Ceremonials, but what sets the tone and a no-holds-barred approach to the album as a whole. Indeed, there’s nothing about Ceremonials to suggest that Florence is shrinking from the spotlight that’s shining on her, as she takes full advantage of her opportunities not by becoming a caricature of herself or getting by on cheap stunts, but by aiming for something that’s got more staying power and an eye for the bigger picture. Building up tension until it reaches a fevered pitch, “What the Water Gave Me” has a mythical quality that recalls P.J. Harvey when she’s getting all archetypal, only that Florence and the Machine keeps the sound dancefloor-ready with a glossier, slinkier feel to it. The same goes for the gothic dimensions of the dirge-like “Seven Devils”, as psychothriller instrumental parts like chilling piano lines and eerie strings accompany Welch’s resonant vocals. And while it may not be as dramatic, “No Light, No Light” offers one of the better examples on Ceremonials of Welch’s dynamic pop chops, which transform what might otherwise be an artsy-fartsy new-agey sing-along into something with more heft and depth, thanks to its propulsive rhythms and urgent melodies.

Yet what’s even more powerful than Welch’s sheer art-pop hubris on Ceremonials is her uncanny execution. It’s something you can’t help by notice as Florence and the Machine run through a gamut of genres on the album without ever sacrificing their inimitable style, hitting the mark on everything from natural forays into soulful R&B and electro-pop to a surprise plunge into glammy Britpop. On the vampy “Lover to Lover”, Welch lets her rich, versatile pipes loose to show that she can do more than just keep pace with her big-voiced contemporaries, but adds enough of her own ethereal sound to the bluesy pianos and synths to make things come off all her own. “Heartlines” creates moods that are just as stirring and bracing, though it does so by playing up more electronic components and atmospheric synths than elsewhere on Ceremonials. Most remarkable — and least expected — of all, though, is the Britpoppy “Breaking Down”, which almost sounds like something you’d expect from the mid-’90s heyday of Pulp and Suede than anything else. Maybe it’s not as harrowing and imposing as some of the other tracks, but “Breaking Down” more than makes up for it with its strut and swagger, as Welch shows off her range as a performer by playing up the attitude, shifting from creepy grumbling that might make Jarvis Cocker proud to brashly delivered lines à la Brett Anderson.

Sure, there are those moments on Ceremonials when Welch’s exuberance gets the better of her, especially the over-the-top “Say my name” refrain on “Spectrum”, or her flights-of-fancy are a little too in her head, like on the opener “Only If for Tonight”. But ultimately, what makes Welch the artist that she is is that she’s her own hardest-to-please critic, as the yearning, searching tone of “All This and Heaven” suggests when she explains that what she wants to express exceeds the grasp of her own skills and words: “And the words are all escaping / And coming back all damaged / And I would put them back in poetry / If I only knew how and I can’t seem to understand it.” In the end, though, these lines from “All This and Heaven” smack of either false modesty or an overachieving perfectionist streak. And even if you were so inclined to take Welch at her word, it only means that the future somehow has even more in store for Florence and the Machine, since the sentiments on Ceremonials sound enough like poetry to prove that she understands how and what she’s doing pretty well as it is.