Coming out of nowhere to take the fright film society by storm, the efforts of these two talented Australians (with further developmental help from Parts Two through Four guide Darren Lynn Bouseman) became the benchmark for fear over the last 10 years. Dozens of movies, made in conjunction with the real gorno purveyor – Eli Roth’s Hostel -took inspiration from this taut, post-modern thriller and, soon, the masked slasher made way for a clever criminal, his (or her) disembodied voice, and a series of cruel, brutal games.

Actually, they’re more “traps” than anything else, ways for the main villain to test the l;ife and death mantle of those he’s targeted. In the first film, Wan and Whannell (who are, now, more famous for their reversion to old fashioned bloodless boo’s a la Insidious and The Conjuring) only offered a couple of these concepts. It was Darren Lynn Bouseman and his influence in the series that took it from a murderous mindgame to more and more gore-oriented contraptions. By the time the series was wrapping up, the motives behind Jigsaw’s revenge became murkier and murkier, while the splatter-ific games became quirkier and quirkier. With that in mind, and the 10th anniversary re-release of Saw to theaters this Halloween, we’ve come up with our Top 10 Traps in the series. Yes, there are more graphic and gruesome examples, but for some reason, these examples stuck with us. In many ways, they represent why Wan and Whannell’s baby remains so popular. 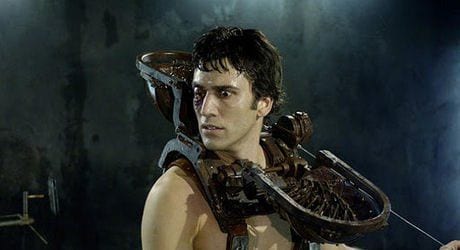 When the inevitable sequel to the first Saw film was announced, many wondered how originators James Wan and Leigh Whannell would top themselves. Oddly enough, they didn’t have to. Darren Lynn Bouseman had just finished a treatment for something called The Desperate, and with minimal polishing from the famed duo, it was his ideas that became the basis for the follow-up. While the flytrap resembles the iconic number three item on this list, it seems like a clever combination of a couple of ideas. The notion of having to dig behind your own eye for a key to escape remains one of the most devious ever.

This is the finale for Saw IV, Darren Lynn Bouseman’s last gasp as Saw‘s main guide, and it’s a doozy. Basically, a series of frozen bricks are positioned around Detective Eric Matthews (Donnie Wahlberg), with a heater slowly melting the two holding him up. He’s also suspended around the neck by a rope and his head is placed in such a way that, if a door mechanism is triggered, two of the blocks come smashing together where his skull should be. The set-up is excellent and the tension palpable. Of course, the payoff proves that nothing in a Saw film satisfies better than blood.

When viewed initially, this sequence packs a “should be higher on the list” wallop. Time, though, has tempered the idea, as does a healthy dose of reality. Anyone tossed into a pit of used hypodermics (in this case, a former junkie and survivor of Jigsaw’s games) would surely walk out wounded and festooned with random items sticking out of him or her. Here, the worst part is the struggle before the success. While trying to find the key inside the pile of medical waste, the character’s screaming is just sickening. Years later, it’s still effective, if way over the top.

This trap is a simple one: a table is set up with five spinning saw blades. The victims — in this case, the last two people standing — have to place their hands in the openings and allow the device to start slicing into their fingers. After 10 pints of blood are collected, the participants can go free. Unfortunately, the average human only has eight pints to offer. So someone has to die…and it’s a gruesome, gory way to go. Crafted in such a way to maximize the nauseating effect of a power tool tearing open human flesh, this remains one of the Saw series’ most horrific traps.

As part of this (for now) final installment in the series, we witness a young man whose made a mint out of wrongfully claiming a connection to Jigsaw finally get his comeuppance. In this case, he is asked to watch as his frightened publicist is placed in a device which has four sharp metal rods ready to pierce her throat and face. All our hero has to do is retrieve a key…from her stomach…with a fishing line and hook…and all while she and he keep the noise down, less the decibels drive the small spears faster. Talk about nerve-racking, and in the end, shattering. 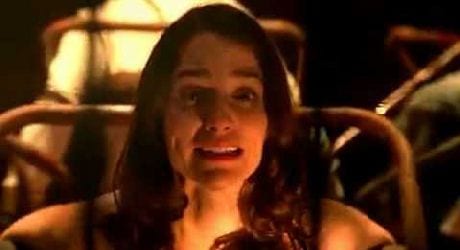 A crooked health insurance executive walks into a room to find six of his underlings tied to a playground device. As it spins, it slows to a stop randomly, the person in that place now staring down the barrel of a point blank shotgun. All our boss has to do is stick his hand in a box and let a metal rod pierce it. Doing so keeps the gun from discharging. Oh, and he can only save two of the six, at the most. The result is like Russian Roulette reconfigured for someone’s demented amusement park prerogative. The suspense in this sequence is almost unbearable.

This is only briefly mentioned (and viewed), but it makes one hell of an impact. A supposed “survivor” of Jigsaw explains how she and her abusive boyfriend were suspended over a series of running lawnmowers, the blades prepared to do a significant slice and dice on whoever was unfortunate enough to fall. To make matters more interesting, the couple are holding onto ladders made of razor wire and have the ability to knock the other one down to save themselves. Since our lucky lady is the one spinning the yarn, it’s fairly easy to see who was made into human mulch.

All during this 10th anniversary celebration, one image has become instantly identifiable as pure and utter Saw: the portrait of actress Shawnee Smith, as former junkie Amanda Young, donning one of Jigsaw’s most horrific devices: the jaw separating and head ripping reverse bear trap. In the film, we learn that the only way to free oneself from this hellish conceit is to do a little exploratory surgery on a paralyzed victim nearby. One stomach vivisection later, and a key unlocks the skull splitting device. For several intense minutes, we watch as Amanda “tries.” Her success spawns an entire intriguing subplot for the sequels.

Even though it is one of the less human intense devices in the series, it remains one of the absolute nastiest. A judge, responsible giving a light sentence to a drunk driver who killed a little boy, is chained to the bottom of a tank. Above him is a huge grinder…and a set of rotten pig corpses ready for putrid liquefaction. As the bodies are minced up, the remaining sluice fills the reservoir. In order to save him, our hero has to incinerate all the toys owned by the dead child…HIS dead child. Again, while not particularly gruesome or gory, this is still one stomach turning torture test.

The most ingenious element in any Saw film is also its biggest SPOILER, so unless you are familiar with the film, this entry is perhaps best left until after a viewing (or two). With that being said, this is the reason that producers saw potential in the franchise. After nearly 90 minutes of making us think one thing was happening, director James Wan and his co-writer sidekick Leigh Whannell pulled the rug out from under us, revealing that everything going on in this dingy hellhole was being supervised by… the dead body laying in the middle of the room. Indeed, villain Jigsaw played possum the whole time in order to make sure his finest “game” was navigated until the end.