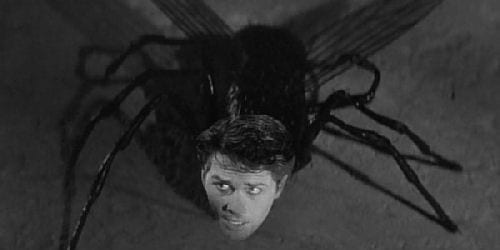 Alternative title: Look What They Done to My Head, Ma

* Monster gets more screen time than in the original.

* Somehow, even though you know what’s coming, it’s still kind of creepy.

* Not as good as the original film.

Two male leads are pretty vapid, as is the female “love” interest, and even Vincent Price doesn’t actually do much

SYNOPSIS: Twenty years or so have passed since the death of Andre at the end—and the beginning, come to think of it—of The Fly (1958). As this film opens, we see his beloved wife Helene laid to rest as well. Not that we see it very well, since the world has lost all color and the shadows in this black-and-white picture are pretty thick… Nonetheless, some things haven’t changed: there’s vaguely effeminate Uncle Francois, recounting the story of Andre’s experimental catastrophe to Andre’s sulky offspring, Philippe. Hey Francois! Are you sure that’s such a good idea?

Actually it’s not a good idea at all, since Philippe, who isn’t overloaded in the brains department, decides that Dad was onto something after all, but just got a little careless. Can you see where this is going? Riiight. Unfortunately though, Philippe can see nothing of the sort—told you he was dim—so he gets together with hired hand Alan to try to reproduce Dad’s success. Which he does, and then some. After coercing Uncle Francois into helping out against his better judgment, Philippe and Alan just about perfect Dad’s technology. But there’s more to this story than meets the eye at first. Not wanting to give anything away, let’s just say that the detective snooping around has good reason to be keeping an eye on our boys, even though he comes to a somewhat tragic end.

Somewhere along the line this “horror” movie morphs into a noir-esque drama rife with shady characters, tilted Stetsons, cars rolling over cliffs with bodies in the trunk—but no tough dames, sorry. There’s even a leering, well-connected mortician named Max. And then, just when you think it’s safe to relax, something gross happens, like that bit with the guinea pig. Ugh! To the filmmakers’ credit, they avoid simply repeating the same plot as the original; even though there are strong similarities, there are also enough twists to make this movie enjoyable for its own sake. If “enjoyable” is the right word. The ending is a bit of a letdown, though. Isn’t it? Or have I just gotten cynical in my old age?

What gets permanently rearranged—for the worse: A guinea pig; a detective; a fly; a scientist who takes after Papa a little too much; a back-stabbin’ dirty dog; a mortician.

Did you notice? In the scene in Andre’s old research lab, when Francois is telling Philippe what happened years before, some of Andre’s final message to Helene from the earlier film can just be made out, scrawled on the blackoard, to wit: “I Love You.” Spooky! Like Andre’s voice from the grave, or something.

Maybe you can explain… …why the cars and fashions from Philippe’s 20s are exactly the same as those from when he was six? Actually, if you think about it too much, this can give you a headache. If the first movie takes place in 1958, then the second should be happening in the 1970s…. but it sure doesn’t look like the ’70s. (Stetsons, Edsels.) But if the second movie takes place in 1959, then the first must’ve taken place in the 1930s (or early ’40s, at the latest). But the first one doesn’t look like the ’30s or ’40s. On the other hand, these events are all taking place in Montreal, so knows what’s going on up there?

This reminds me of… The third movie in the trilogy, Curse of the Fly (1965) which is “Priceless”—as in, without Vincent Price. (I know, I made that joke last week too.) It’s not very good. (The movie, I mean, not the joke. Although that too…)

Somehow their careers survived: For more info on Vincent Price (Francois), see my entries on The Fly (1958) and The Tingler (1959). Also worth hunting up is The Abominable Dr. Phibes (1971) in which Price takes the stock mad scientist character to a whole new level. 1959 was a busy year for Brett Halsey (Philippe) who showed up again in Atomic Submarine, Submarine Seahawk, and Jet Over the Atlantic. His career would extend into the 1990s, with Italian horror flicks like Black Cat (1990) and Demonia (1992). David Frankham (Alan) would feature in 1962’s Tales of Terror, 1979’s The Great Santini, and other movies. Dan Seymour (Max)’s career would end with this film; earlier roles had included bits in A Night in Casablanca (1946) with the Marx Brothers, plus Key Largo (1948) and To Have and Have Not (1944)—both with Bogart and Bacall. So, was this an anticlimax? You decide.

BOTTOM LINE: Not a great movie, but not a bad one either. With a few tricks up its sleeve, this sequel is a respectable enough successor to the classic original.