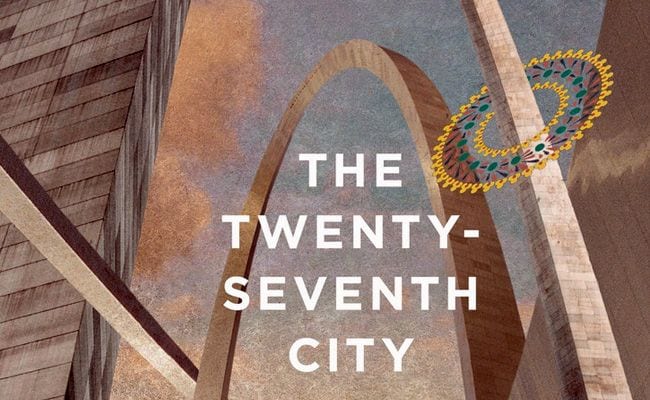 In 1988, an unknown writer named Jonathan Franzen published his first novel, The Twenty-Seventh City. It was well-received critically, but the author did not become a household name until 2001, when The Corrections won the National Book Award.

Picador has wisely remedied this public oversight by reissuing The Twenty-Seventh City novel in a handsome 25th Anniversary edition. For those reading it for the first time, the novel is shocking in its prescience. A reader unaware of the publication date would assume it recent, for the problems Franzen envisions in this urban dystopia are all too real: blight, socioeconomic disparities along racial lines, domestic terrorism, government spying on private citizens, shifty tax dealings, and dicey real estate transactions.

The Twenty-Seventh City refers to St. Louis, Missouri. The year, vaguely, is 1984. The city has a new police chief, an Indian woman named S. Jammu, who previously led the Bombay force. Despite some community murmurings, particularly amongst the old boy network, the citizens are open-minded. Jammu is an American citizen on the paternal side, modest about her significant achievements in Bombay, where poverty and corruption are concerned.

Yet Jammu is hiding the truth from the citizens of St. Louis. Using her mother’s ill-gotten monies, she is leading a Communist cell of Indian operatives, brought to St. Louis expressly to help her create “The State”. Jammu chose St. Louis because it was most available. To that end, Jammu and compatriots B. Singh and Asha Hammaker, a beauty who has married into the top St. Louis beer brewing family, will pursue St. Louis’s most prominent men. Jammu wants to win them over politically; once they are bagged, the city will be hers. She is a sociopath, interested only in power, nearly incapable of emotional connection.

Topping Jammu’s list is Martin Probst. Probst, the city’s linchpin, is famous for having engineered the St. Louis Arch. His construction business—his entire life — mimics his name, setting a shining example of moral probity. Born into a poor family, Probst skipped college, going into construction. He worked extremely hard, earning much money, shunning unionization, vowing instead to treat his workers fairly. When his good intentions backfire, he seeks legal action, meeting and marrying his lawyer’s daughter Barbara in the process. Probst, Barbara, and their 18-year-old daughter Luisa now live in a fine home in Webster Groves, one of St. Louis’s best subdivisions.

Barbara Probst dropped a physics fellowship to marry Martin. Like her spouse, Barbara is intended to model moral righteousness, but her behaviors become increasingly erratic as the novel progresses. She now works part-time at the library, manages the house, and tries to connect to the distant Luisa. She is increasingly angry with Martin, who is emotionally and fiscally parsimonious.

Luisa, a bright, sullen young woman, is perpetually bored. In a serious misstep, Franzen gives her a diaphragm. A sexually active teenaged girl of that era—the last gasp before STD’s were fatal—would have used the Pill. If the Pill were impossible, condoms. Diaphragms, with their required repeat fittings and contraceptive jelly, were the birth control choice of our mothers. No teenaged girl of my generation—that is, Luisa’s—ever used them.

Further, Luisa is made out to be a fairly typical, if pampered, teenaged girl whose primary interests are hanging out with her girlfriends and chasing boys. Yet Franzen gives his birdwatching passion to her. In a book populated with middle-aged males, there were countless other characters better suited to this decidedly non-teen pastime.

Early in the novel, Luisa takes up with Duane, a college dropout. To Barbara’s consternation, she runs away from Webster Groves to live with Duane in his spare bachelor’s apartment. Martin is furious, but after visiting Duane’s bored father, doesn’t push the issue further. Outwardly Luisa is detached; but she continues attending school, is still college-bound, dutifully telephones her mother. Barbara tries cajoling her with offers of money and a car, while Martin throws himself more deeply into work. Luisa stubbornly stays with Duane. The family begins imploding.

Meanwhile, strange things are happening to St. Louis. A group called the Osage Warriors takes responsibility for a series of terrorist acts: bombings, shootings, detonations. Oddly, while there are injuries, there are few fatalities. Even stranger, the police cannot locate a single terrorist or much evidence.

Confidence in Jammu remains high. The very few who question her are shunned or dismissed as bigots. Governor Norris, an elder statesman, immediately makes the connection; his friends ignore him. Even Probst, when presented with clear evidence that Jammu is spying on him, remains passive.

Meanwhile, Jammu’s impact is being felt across Municipal Growth, a group of St. Louis businessmen led by Martin Probst. Their interests lie in furthering the needs of St. Louis, city and county. Jammu is rapidly poaching the men using real estate deals, luring them into St. Louis’s decrepit downtown, which she is working to gentrify.

Governor Norris, a member of Municipal Growth, pleads with to the group to see the truth about the police chief and her actions. In a roomful of men—and they are all men—benefiting handsomely Jammu’s favors, his cries go unheeded. Martin is bullishly steadfast in his refusal to acknowledge Jammu’s impact, as if not admitting her power will weaken it.

Jammu is placating more than the men of Municipal Growth. She is making deliberate inroads into the black community. Families losing homes to redevelopment are being bought off with “better” housing and jobs, many on the police force. She has taken up the community’s longtime plea to improve Homer G. Phillips Hospital. Crime has suddenly dropped; the scary young men lurking on St. Louis’s inner city streets have vanished.

Only Clarence Davis, owner of a demolition business, is suspicious of the new police chief’s motives. She’s too good to be true, he complains to brother-in-law RC. RC, who has just landed a job on the police force, doesn’t question his new boss. Jammu is okay until he is forced into a sterile new apartment and his wife, Annie, must accept a job that exhausts her. Their marriage suffers. Life as a black man in a white-dominated city goes from bad to worse.

The city is a character in this novel, a dying place with overarching hopes and expectations outweighing its capacities. In this, Franzen predicts the hopeless downturn of cities like Gary, Indiana and Detroit, Michigan. Jammu’s machinations bring St. Louis a temporary, false economic upswing, and the city coasts, briefly exhilarated, moving Franzen to an early glimpse of the postmodern flights dotting The Corrections:

But the city? Its self-pitying, self-exalting essence? That part of the place which would not forget and which had asked, Why us? It was dead. Prosperity, Jammu, and national attention had killed it. St. Louis was just another success story now, happy in the one-dimensional way that all thriving cities are. If it ever had anything extraordinary to tell the country, anything admonishing or inspiring, it would say it no more.

The Twenty-Seventh City is an extraordinary achievement, inventive and richly imagined. How could Franzen have so accurately predicted what has come to pass?

Yet there are problems with this novel that echo in his later work, particularly where women are concerned.

Barbara Probst is especially maddening. How are we are to understand this highly intelligent woman, trained in physics, when she allows photographer John Nissing into her home? Nissing’s statements are so inappropriately personal, so bizarre, that any rational person would throw him out. Barbara sleeps with him, then trails Martin like a penitent infant. What happened to the decisive, angry wife? From here, her behaviors only go downhill, leaving the reader wondering when, and why, she lost her mind.

Here is a moment that begs for editorial intervention: “A sudden menstrual stitch… as she left the room. To Nissing it may have looked as if her legs had gone to sleep.” The beginning of menses are not sudden stitches. Nor do your legs go numb, or appear to.

The other women in the book are either housewives—silly Bunny, miserable Bev, whose food is too rich, Barbara’s childish sister, referred to as Audreykins, or creepy operatives who are indeed intelligent but absolutely evil. Asha Hammaker is beautiful, cultivated, and a gunrunner when Jammu met her. Jammu hasn’t a silly bone in her body: she is a cold-blooded murderer. Her mother, Poona, who is both underwriting and profiting from this operation, is no better.

Then there’s poor Devi Mandan, her heroin-induced madness a precursor to Albert Lambert’s disordered Parkinsonian thinking in The Corrections. There is hope only for Luisa. Self-centered, self-indulgent, selfish, she is also only 18: young enough to grow up.

Lest I sound like a finicky reviewer, I point these things out because they interrupt an otherwise spectacular narrative. And these kinds of problems occur most often when Franzen is writing about women. I don’t want to accuse Franzen of misogyny, as I don’t think that’s the case. Rather, writing about women is a weak point in an otherwise amazing body of work.

Finally, there is the strange case of Mohnwirbel the live-in gardener. Why the Probst family needs a live-in gardener is never explained—after all, they do not inhabit an English castle. Nor does Franzen explain why the nicest molding in their elegant home is in Mohnwirbel’s apartment, which is over the garage. Nor is it ever made clear why Mohnwirbel is kept on after a revolting discovery is made in said apartment with the nicest molding.

The Twenty-Seventh City’s plot draws the reader inexorably into Jammu’s machinations, her efforts to merge the City and County of St. Louis, which has tremendous ramifications for the citizens but little impact on her personally beyond power’s thrill. Probst squares off against her in what promises to be a life-changing election for St. Louis… until it isn’t.

After cranking the novel up for some 500 pages, Franzen skillfully winds the plot down. here are the necessary deaths, the surprise endings, the eureka moments when the reader realizes the plot had to conclude in this way and no other. When novels are this long and complex, endings can disappoint; The Twenty-Seventh City, despite several crazy-making moments, ends on a completely satisfactory note.

Readers of Franzen’s novels will notice The Twenty-Seventh City and Freedom share a great deal. Barbara Probst and Patty Berglund are married to similarly sanctimonious, righteous men. Both women have affairs with unsuitable artistic types—photographer John Nissing (John is actually Indian operative B. Singh) and musician Richard Katz. Both women are described as community pillars, envied by female neighbors, coveted by other men.

Their children, Luisa and Joey, run away from home in fits of teen angst. While Patty is off having her fling with Richard, Walter—as Martin does—has a rather improbable affair with a young Indian woman. The Indian women meet similar fates. The cities of St. Louis and St. Paul, where the Berglunds live, are facing comparable situations as each area gentrifies.

There are plenty of lesser authors who write the same novel repeatedly. What’s puzzling is how closely these characters and their plots intersect. A novelist as painfully self-aware as Franzen must realize he is repeating himself. So what gives? Unless a self-excoriating essay is forthcoming, we’ll never know.

Although Franzen has an uncanny ability to anger his colleagues and get beneath the public’s skin, he’s a fine writer and apt chronicler of our unhappy, technologically-driven era. His predictions, in this striking first novel and elsewhere, should engender more than a grudging respect. A quarter century after its debut, The Twenty-Seventh City merits our full attention and admiration.