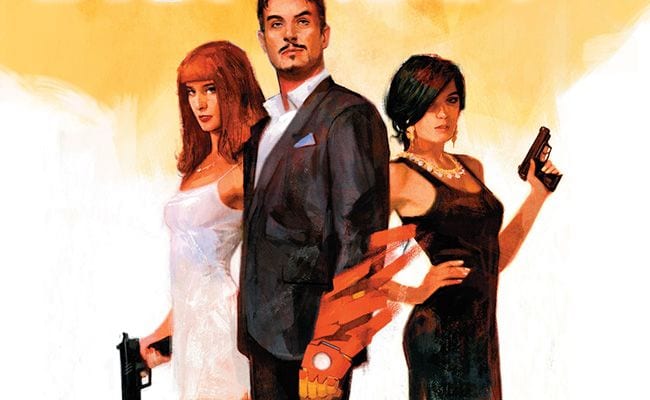 The J. J. Abrams and M. Night Shyamalans of the world have made a comfortable living off shocking revelations. It’s an old and, at times, overused tactic to add excitement to a story, but nothing gets overused without it being effective on some levels. Since the big revelation about Darth Vader being Luke Skywalker’s father in Empire Strikes Back, every creator in every medium has been trying to match the impact. To date, most have either failed, come up short, or something in between.

Kieron Gillen came surprisingly close during his run on Iron Man. He crafted a story around the origin of Tony Stark, but not in the sense that it explored how he became Iron Man. There have already been multiple stories and a billion-dollar movie built around that narrative. Instead, Gillen focused on Tony Stark’s family and this led to a revelation that would’ve surprised George Lucas himself.

Tony Stark is not the son of Howard Stark. He was adopted. His entire sense of self and who he is had been shaken. It’s a story with many ramifications. It would be like Bruce Wayne finding out he’s half-Kryptonian. It completely changes the dynamics of Iron Man. However, the full scope of this impact hasn’t been fully explored yet. That’s what Brian Michael Bendis seeks to change with International Iron Man #1.

The narrative of this series promises to explore the ramifications of Tony’s newfound heritage or lack thereof. It’s a narrative that is slow and tedious in the beginning, but the payoff at the end creates just the right amount of intrigue and unlike Empire Strikes Back, nobody had to lose a hand. Tony still ended up getting shot, but let’s face it. That’s hardly the worst outcome of a conflict for him.

That payoff was the product of a story built around an extended flashback. In terms of narrative style, it ranks just above a clip show in a sitcom in terms of gimmicks that are easy to get sick of. However, the flashback in this case tells an important story from Tony Stark’s past. Through that story, Brian Michael Bendis reveals the dynamic Tony had with his adopted parents. That’s not to say there were telling hints about his secret heritage, but it certainly gives the impression that there were clues. Why else would a college-aged boy be so eager to meet a cute girl’s parents?

The answer to that question doesn’t reveal as much as the question itself. Throughout this flashback, a younger, less heroic Tony Stark demonstrates an undeniable distance between him and who he thinks are his birth parents. It’s not the kind of distance that just comes with going to college in London either. At one point, a girl that has caught his eye said she was close to her family. For Tony Stark, a kid whose family has enough money to buy their own university and excuse him from every homework assignment, that leaves an undeniable impact.

It sets the tone for the issues that Tony faces in the future. He isn’t close with his family and it’s not because of the typical problems faced by rich, genius playboys. He’s not bitter that his parents paid a nanny to raise him in the tradition of Downton Abbey. He’s not bitter that he didn’t get the right color Ferrari for his 16th birthday, either. There are other factors involved that didn’t make sense at the time, but like reading the spoilers for The Sixth Sense, they make sense now.

While these issues help set an appropriate tone, the story itself is less than thrilling. However, this is more a matter of pragmatism rather than simply not having enough things for Iron Man to blow up. The flashback through which most of the story is told takes place before Tony Stark became Iron Man. The story doesn’t try to put him in a position to blow something up. It’s purpose is to put him into a position to confront these issues. That process still involves him getting shot, so it’s not like it has the monotone of an economics lecture.

This same process is also built around Tony’s interest in a woman named Cassandra. It’s one of the common themes that, like Iron Man blowing something up, unite Tony’s past and present. Being a college-aged student in this flashback, he’s easily distracted from his studies and his family issues by a beautiful woman. It might as well be the one unifying factor between rich tech geniuses and poor, immature frat guys. What makes this woman more important than another notch on Tony’s many belts is her potential link to Tony’s biological parents.

It’s a link that isn’t revealed until the end. For much of the story, Cassandra comes off as just another rich, privileged woman who has a big target on her back and not in the Kardashian sort of way. Tony, being a fan of danger even before he became Iron Man, is certainly intrigued. However, that intrigue evolves beyond a typical college hook-up when Hydra enters the picture. Not having an Iron Man suit at the time, it offers a telling hint that this woman knows things that cannot be easily Googled.

As intriguing as the premise might be, International Iron Man #1 offers little beyond telling hints and standard intrigue. The story surrounding Tony Stark’s biological parents takes a step forward here, but just barely. It’s a story that focuses more on characters than shooting Hydra goons in the head and while it has its moments, there’s nothing overly memorable to take from it.

More than anything else, International Iron Man #1 is a trailer for a much larger story involving Tony’s heritage. While some trailers end up being better than the movies they tease, this one offers more promise than most. It’s like the difference between the Deadpool trailer and the trailer for the last Fantastic Four movie: one promises great entertainment value, one promises to ignite outrage on message boards. International Iron Man is still building up its entertainment value, but it shouldn’t ignite any message boards just yet.