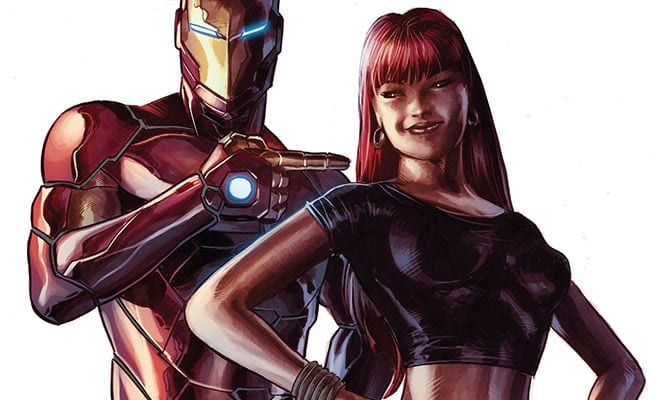 From a purely pragmatic standpoint, creating a compelling Iron Man story creates a unique set of challenges. A writer has to make a rich, good-looking, genius playboy likeable without turning him into a Charlie Sheen archetype. Needless to say, this is not as easy as Robert Downey Jr. makes it out to be.

Tony Stark does a lot of things that would earn plenty of scorn, criticism, and negative hashtags in the real world. He’s profited from the sale of deadly weapons, he’s chased beautiful women to an extent that even Hugh Hefner would find excessive, and he’s carried himself with an ego that is almost on par with that of Kanye West.

Despite these challenges, Brian Michael Bendis has succeeded in rising to the occasion throughout the course of Invincible Iron Man. He doesn’t just put Tony Stark in a position for him to show off his unparalleled tech-savvy or his Robert Downey Jr. type charisma. He puts him in situations that reveal his insecurities.

As hard as it may be for anyone outside the top tax bracket to contemplate, even billionaires have insecurities. Even a billionaire that hangs out with Captain America and full-blooded Asgardians struggles with it. Bendis even makes the case that billionaires in that position struggle more than most. It certainly doesn’t help when demons, vindictive women, and Dr. Doom enter the mix as well. There’s a limit to how much his obscene wealth can mask such vulnerabilities.

Regardless of how well they’re masked, these vulnerabilities have helped create a narrative in Invincible Iron Man that makes Tony Stark a genuinely intriguing character by doing something that isn’t easy to do with someone of his wealth and resources. It humanizes him. As this series has unfolded, Tony has humbled himself in ways he doesn’t usually show unless Thanos has him under his boot.

His battles against Madam Masque and his uneasy team-ups with Dr. Doom add plenty of spectacle around that humility. Invincible Iron Man #7 attempts to add new dimensions to this spectacle. Unlike previous spectacles, this one involves Mary Jane Watson. As Spider-Man fans can attest, she’s a spectacle unto herself and one that might seem out of place in Iron Man’s world. However, Bendis makes the case that Mary Jane isn’t just qualified to navigate this world; her ability to handle this world and look good while doing it might as well be a superpower.

It might not sit well with Spider-Man fans. It might not sit well with Iron Man fans, either. This is because Mary Jane has been built around a certain set of assumptions. She existed for many years as a love interest and someone who attracts pumpkin bombs almost as much as she attracts men. She only ever seemed to exist as Peter Parker’s wife / girlfriend / love interest. Her growing beyond that role is a very recent concept. In fact, there are terrible reality shows that have existed longer than this concept.

It’s because of this concept, building Mary Jane up as someone other than a love interest for Spider-Man, that she fits into Tony Stark’s world. A good chunk of Invincible Iron Man #7 is spent establishing just how comfortable Mary Jane is in a world where bombs, be they shaped like pumpkins or something else, are likely to go off at any given moment. At no point is she overwhelmed, intimidated, or even anxious. She survived dating Spider-Man. That makes her more qualified than most women to handle this world. Gwen Stacy can attest to this.

Beyond Mary Jane’s ability to handle the pressure, she’s never bedazzled by Tony Stark’s wealth, charm, or brand. She never carries herself as a rich man’s groupie whose primary job is to exist as arm candy. She certainly could if she wanted to, but she doesn’t. If this kind of relationship had happened 20 years ago, it would’ve been shocking. Since it’s 2016, it just feels overdue.

Indeed, instead of being arm candy, Mary Jane relies on her wit and personality, which make her immune to Tony Stark’s charms while making him vulnerable to hers. Even for a man in an iron suit, it’s another vulnerability that Tony isn’t used to dealing with. For the narrative that Invincible Iron Man has established, it’s perfectly in line with the Tony Stark that Bendis has been developing. It’s still hard to feel sorry for a man who can fly to Tokyo without dealing with the TSA, but he’s still painfully human in a way that’s easy to respect.

With Tony and Mary Jane, l Bendis dedicates significant, albeit excessive, time and energy establishing a unique dynamic. It’s a dynamic that is the very antithesis of 50 Shades of Grey in that the handsome rich man interacts with a beautiful woman in a way that never becomes romantic, sexual, or abusive. It might come off as unusual that a man like Tony Stark can exercise such restraint, but it feels like it shouldn’t, in an era when movies like Mad Max: Fury Road are an unmitigated success.

As well-developed as this dynamic is, it doesn’t do much to move the narrative forward. So much time is spent bringing Mary Jane into Tony’s world that it’s easy to forget that there’s another ongoing story where bombs that are definitely not pumpkin shaped started exploding. War Machine doesn’t get to fire a shot in return. Iron Man doesn’t even get a chance to make it up to him. It almost feels like there was an extended commercial break that makes the story feel choppy.

While the ongoing plot with War Machine slowed, it didn’t stall. Mary Jane’s introduction to Invincible Iron Man did help move this plot forward, albeit indirectly. Invincible Iron Man #7 as a whole succeeds in introducing an important new dynamic into Tony’s life, but does little to explore the latest challenges within that life.

At the very least, Tony Stark can say he has another beautiful woman helping him organize the growing list of vulnerabilities in his life and as Peter Parker can attest, this can be a very good thing. He just needs to stay away from Mephisto.