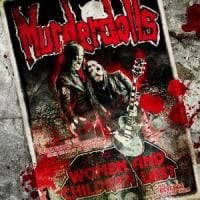 Horror punk is one of the most difficult and specialized subgenres to master. Not only do horror-punk bands have to master the style created by genre progenitors the Misfits, but they also have to find a unique way to stand out from the forefathers. This is why most horror punk bands simply become Misfits cover bands over time, because the subtlety required to achieve this mastery is very rare.

A few bands have found the right balance necessary to be successful at horror punk. One of the most underrated bands in this elite group is the Murderdolls, the duo of vocalist Wednesday 13 and guitarist Joey Jordison, who also plays drums for Slipknot and Rob Zombie. Their debut Beyond the Valley of the Murderdolls made a huge splash in 2002, but they went on a six-year hiatus in 2004 due to Jordison’s obligations with Slipknot and Wednesday 13 starting his solo project. The pair reunited early in 2010 to record a new album, much to the delight of horror-punk enthusiasts. Women and Children Last is just as good as fans hoped it would be, creating a new prototype for future horror-punk bands.

Women and Children Last justifies the band’s numerous descriptions of sounding like Mötley Crüe combined with the Misfits. The album’s atmosphere is permeated by the vintage hair-metal guitar tones of classic Crüe albums. Jordison’s guitar performance is excellent, proving what a talented and versatile musician he is. Jordison also played drums for the studio recordings, displaying a far different style from the schizophrenic, highly technical performance he gives in Slipknot. The drums are much slower and more directive in the rhythm, never taking the forefront but always proving essential to each song. Murderdolls touring guitarist Roman Surman is solid on lead guitar, throwing down top-notch solos while not overplaying his parts. The Mötley Crüe comparisons are given further credence through guest performances by Crüe guitarist Mick Mars on “Drug Me to Hell” and “Blood-Stained Valentine”.

Wednesday 13 is at the top of his game lyrically on Women and Children Last. He crafts an amusing, yet still horror-filled world perfectly in sync with the dark humor of the Misfits, while adding just enough Crüe-inspired hair-metal independence and spirit to keep things interesting. The vocal performance is where the singer really shines, though. Taking a page out of Rob Zombie’s playbook, Wednesday puts even more throat-scraping grit and grime into his voice, fitting perfectly with the dark music and darker lyrics. The effect evinces a precise reaction out of listeners, enticing them to listen to more while simultaneously driving home the perverse and slightly insane imagery created in each song.

Women and Children Last is the perfect blend of horror punk and hair metal, two styles that don’t appear to mesh well with one another on the surface. This album proves that it can be done, and the Murderdolls should be proud of their accomplishments. Very few bands could come back from such a long break and still create a follow-up album that is even better than its predecessor. Joey Jordison and Wednesday 13 have done just that, and in doing so, left fans desperately hoping that they won’t have to wait eight years for the third album to come out.