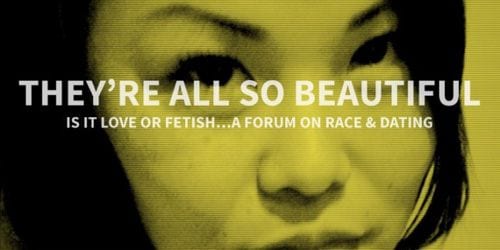 “Who said making a documentary would be easy?” Rhetorical and even fanciful, Debbie Lum’s question is only the first of many that emerge from her film, Seeking Asian Female. While the documentary begins as an examination of particular and also familiar subjects, namely, men who seek Asian females, it quickly transforms into a study of the relationship between filmmaker and subject, a relationship premised on a difficult mix of trust and doubt, desire and interdependence, self-reflection and self-deception.

At first, the documentary looks to be an anecdotal study of “Asian fetish,” a generally conceived phenomenon by which (mostly white) men pursue their attractions to Asian women. (“I’ve always wondered why certain western men have a thing for Asian women,” Lum confesses, her own role introduced early in the film.) Just so, the film opens with a series of brief self-descriptions, men who narrate what they want, without much apparent self-awareness. “It’s the hair, the long black hair,” offers one interviewee. “I think they give more consideration to how the man feels,” says another, the clichés at once obvious and disturbing. But then, as Lum puts it in the voiceover that helps to complicate every image on screen, she finds the “prefect documentary subject,” Steven Bolstad, a 60ish, Caucasian San Francisco cashier who’s been looking for an Asian female for years, that is, since before he had a computer and had to rely on magazines.

And with that, the film is turned from a talking-heads survey intercut with general observations into a personal and long-term relationship in itself. Or at least it feels long-term. As Lum observes Steven’s efforts to “find” his companion — through ads on Craigslist and other websites — she notes as well her participation in the process. While all documentaries must contend with such participation at some level, Seeking Asian Female, which premieres on Independent Lens on 6 May, draws special attention to it, in part because the filmmaker embodies one version of the object of Steven’s desire. “What is it about you, Debbie,” he asks, “that makes me want me want to expose myself to ridicule like this?” (at one point, she remarks on several photos he’s taken of her, that this project could become “my worst nightmare,” that is, she herself might be turned a picture on his wall). Thus, even as Lum focuses her camera on Steven, she makes you aware that he has agreed to the relationship for a number of reasons, one being that she is an Asian female, and another being that she is married to a white man, Jonathan, who shows up in her film as a couple of photographs and a voice on her phone.

At the same time that this abstract notion of Jonathan appears to reassure Steven (in Lum’s narration, anyway) that she is sympathetic to his own needs and wants, however, the differences between Jonathan and Steven are hard to miss. Lum’s husband appears to be close to her age, and though you never see them together or learn about their backgrounds, you do hear him offer counsel that counters her own instincts: when Steven flies to China to meet and bring home a 30-year-old Chinese woman, Sandy, Lum worries out loud that they can’t possibly love one another. On the phone, Jonathan suggests otherwise.

His suggestion articulates one of Lum’s dilemmas, which is that she wonders whether either of her subjects — Steven and now Sandy — are being truthful with her and with one another, as they say they want to be married. (The precise connection between love and marriage may be the possible topic of another documentary altogether.) But almost as soon as this relationship becomes the focus of Lum’s film, it is also not the focus. Rather, the focus becomes her part in that relationship, for both of her subjects, as she’s called on to serve as their translator.

This service involves nuance, of course, and Lum traces her own concerns, as she tries to understand both Sandy and Steven, who face an approaching deadline (they must be married within three months in order to accommodate the end of her K-1 visa) as well as a series of interactions that are at once upsetting and galvanizing. It could be, as Lum (and Jonathan) hope, that the couple is developing a kind of love, it could be that they both understand themselves as subjects in a documentary, and so behave in a way that might concoct or preserve their self-images, and they may be deceiving either themselves or each other or their chronicler.

Here, much as in Stephanie Wang-Breal’s smart film, Wo ai ni Mommy, the process of translation is tricky. And so Lum makes clear, as she complains to both parties that she cannot be “on call,” whenever they have an argument, and also, that she’s uncomfortable performing different roles, “marriage counselor,” according to Steven, and “confidant,” with regard to Sandy, who has no other friends in the States. As Lum describes the increasing tensions, she also tries to withdraw, which means that the relationship between the couple becomes less dramatic — or less visible — than the relationships between filmmaker and subjects.

If it’s always the case that a film can’t show the many dimensions of experience on screen, that it must assemble a series of pieces to resemble a storyline, this one feels like something of a roller coaster ride by its end. More than that, it feels like a ride that turns inside out. For even as Lum can show the pieces of Sandy and even Steven’s experiences on screen, the framing by her own makes your understanding more intricate, less resolved. You see here how the film is a combination of efforts, to display and to hide, to share and to contain. That these many facets remain troubled and troubling, as what’s left off screen looms, in conversations among subjects as well as in your mind. “You’ve done a wonderful, miraculous job,” Steven advises following one near-argument with Lum. “”But you’re not God, you’re just a director.” As Seeking Asian Female indicates, the distinctions are rarely clear.