In 1978, the feminist and Congress representative, Bella Abzug, described her first job to the Chicago Tribune: she was a turban wrapper, and “wrapped and unwrapped turbans” as a model for a Manhattan store; after so many wrappings in a day, her arms would feel “frozen in a position over her head”. From the early 20th century, the “Hindu turban”, wrapped stylishly over the head, arranged intricately in many pleats, became a fashion accessory. A fact coinciding with the first wave of Punjabi emigrants from South Asia on America’s west coast. Usually male, and traveling in groups, they were mainly Sikhs, the turban an important marker of their religion.

Like other immigrants from South Asia then, merchants, sailors and peddlers alike, the Sikhs, too, were commonly referred to as “Hindus” in newspapers and the popular imagination. The Punjabis experienced the same discrimination and xenophobia previous emigrants like the Chinese and Japanese had been subject to, yet the turban became not just a fashion item, but a ubiquitous marker for Hindu and East Asian identity, especially where Hollywood was concerned.

Writing for the St Louis Star and Times in 1910, Helen Hays Atwood described the new fashion accessory: the “Hindu turban”.

“[T]he Oriental tendency that had given us gorgeous cabochons in the last season has given us the Hindu turban. It could be just a plain turban with yards and yards of silk draped round and round it, or it may be more elaborate with feather trimmings or cabochons. Or its draped crown of silk may terminate in points or peaks which remind the observer of a shapely rabbit’s ears. Gold plush with the long nap and the Persian silk with quite highly colored designs are materials greatly used for the Hindu turban and the coronet is generally of a plain velvet to harmonize with the predominating shade of the draped crown.”

As late as 1935, the Fort-Worth Star Telegram noted that the Hindu turban continues to be as popular as ever. “They are suited for town wear, and make the perfect dinner wear for those who like to dance.”

In the 1930s, as British films and then Hollywood turned to the East for swashbuckling war themes, the turban became a marker of authenticity. In those decades, as the US political interests increasingly engaged itself with South and Southeast Asia, films set in what was then termed” the Orient” with themes depicting the brave, chivalrous West as savior of a backward, corrupt East became popular. “Oriental” villains were usually turbaned figures, dressed in long robes, and prone to unusual acts of cruelty.

For example, in 1936, Lee Falk’s first
Phantom comic featured as villain, Kabai Singh, the head of the Singh brotherhood who lived in their undersea dominion of ‘Bengali’; this was, in later comics, and for reasons of political correctness, changed to Bangalla. Singh, of course, was a common last name for emigrants from the Punjab. But it was the works of Rudyard Kipling (1865-1935), with their Manichean East-West dichotomies, the adventure novels of G A Henty (1835-1902), Kipling’s near contemporary A E W Mason (1865-1948), and the English-born American writer Talbot Mundy (1879-1940) that alerted filmmakers in Britain and Hollywood of the “large scale’ and “technicolor” potential of the still unknown and mysterious Orient. 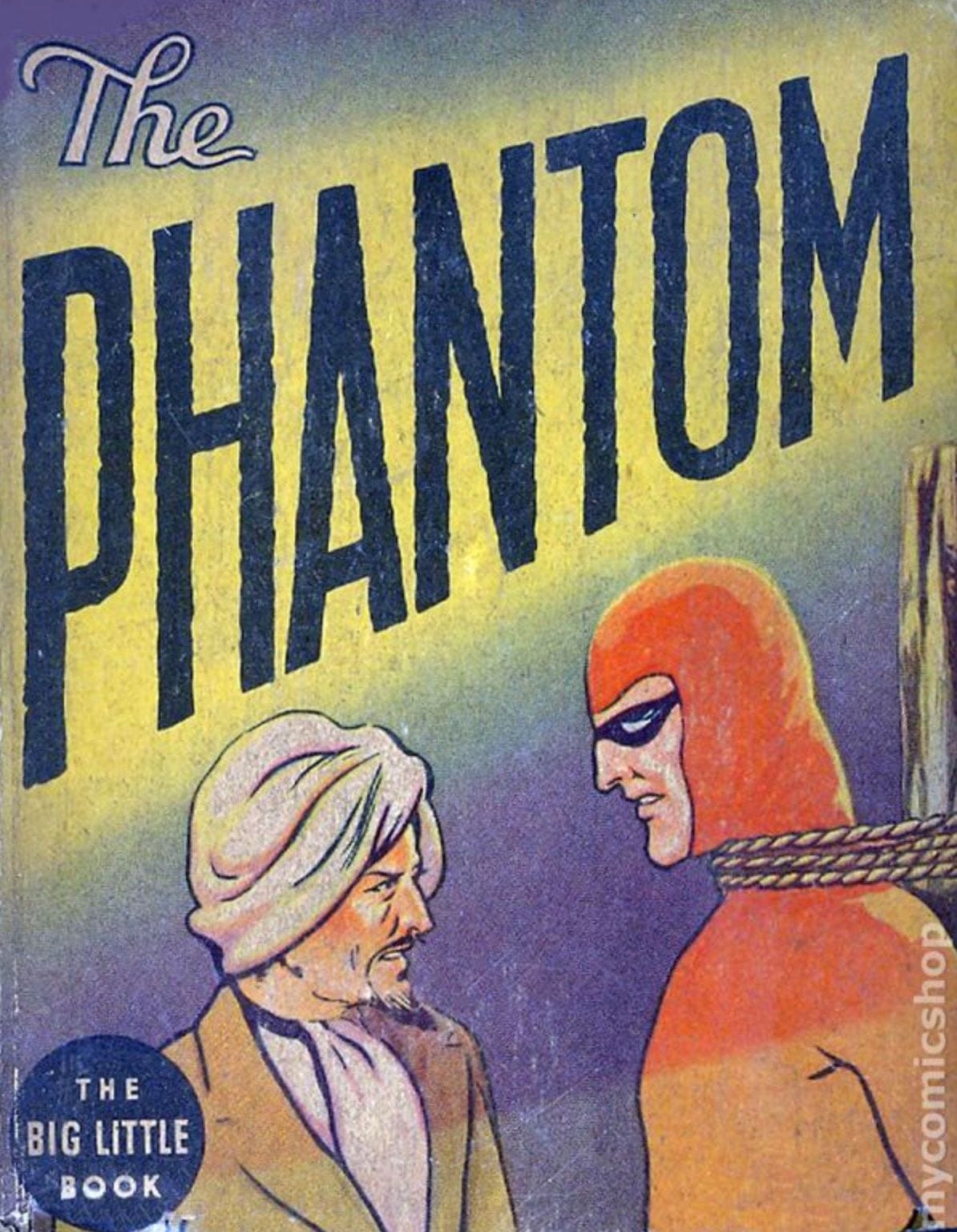 This adoption of a menacing type from the East enabled film studios to showcase their patriotic credentials as World War II loomed. From the mid-30s onward film studios, most based in Los Angeles, began employing South Asians as technical advisors and more specifically as turban-wrappers. Most Punjabi emigrants had already made California their base, working on farms whose ownership was denied them as per the state’s Alien Land Laws of 1913.

Bhogwan Singh first came to attention for his role as turban-wrapper in Michael Curtiz’s 1936 film, Charge of the Light Brigade. This Warner Bros. adaptation of the popular Alfred Tennyson poem moved the scene of action to India and the revolt of 1857. The film needed a lot of ‘natives’, and to help the extras look the part, Bhogwan Singh’s role was indispensable. Syndicated articles appeared, referring to him as the “trim, brown little man” bustling about the sets as the turban wrapper. Bhogwan Singh knew every fold and wrap of a turban, that there were as many ways to wrap a turban as there were castes and tribes in India, and that a wrongly wrapped turban could, in some parts of the world, set off a riot.

Bhogwan Singh performed with snakes for a beach sideshow in Los Angeles before he got his chance with Universal Studios to fix Rudolf Valentino’s turban in George Melford’s film, The Sheik (1921).

Newspaper articles made much of Singh’s knowledge of turbans and his expertise on related matters, including pseudo-science. Turbans were, as Bhogwan Singh believed, one reason why there was so little baldness among South Asian men, unless they were afflicted by diseases like smallpox. He prided himself on his wrapping skills—fixing as many as 250 turbans in one day on one occasion— such that he challenged his rival turban wrappers to a competition. He was also a cultural expert, serving as technical advisor for several films where his knowledge of Indian foods and customs came in handy.

Here and there he secured a bit part, a role as an uncredited extra, appearing in blink and miss roles in films from the mid-30s, such as Wee Willie Winkie (John Ford, 1937), The Lives of a Bengal Lancer (Henry Hathaway, 1935), The Jungle Book (Zoltan Korda, 1942), Sophie Lang Goes West (Charles Reisner, 1937) and others, to the late 1950s, such as: Around the World in Eighty Days (Michael Anderson, 1956) Desert Hell (Charles Marquis Warren, 1958), and Thunder in the East (Charles Vidor, 1952). Some of his meatier roles, where he appeared for more than two minutes and had even a speaking part, came after he had spent more than two decades in Hollywood.

He played a nawab, whose kingdom is threatened by Communist insurgents, before American secret service agents come to the rescue in Fred F. Sears’ The Last Train from Bombay (1952). In Oboler and Clampett’s Bwana Devil (1954), the first 3-D film set in East Africa, but shot in California, Bhogwan Singh played the leader of a group of Indian railway workers terrorized by the frequent appearance of a man-eating lion.

Inclined to embellish his life story, Bhogwan Singh, like many others, came to the US in 1910, as his ‘declaration of naturalization’ of 1949 shows. This followed soon after the Luce-Celler Act was passed, granting South Asian emigrants a quota, and allowing those already resident in the US as ‘aliens’ to finally be able to seek naturalization. In 1910, Singh travelled first to Vancouver, then came into the States on the Northern Pacific Railroad to Blaine, in Washington. By 1914, he was already in California working as a farmhand in the San Pedro area. The next year, he appeared in two shorts films produced by David Horsley, whose studios had recently set up shop in Los Angeles: in The Arab’s Vengeance (Ulysses Davis, 1915), he was credited as a Persian, and in the other, he appeared along with Crane Wilbur in the Mystery of Carter Breene (Robert B. Broadwell, 1915).

It would be six years before he would appear again as Ayeshi in Alla Nazimova’s adaptation of IAR Wylie’s Stronger than Death (Herbert Blaché, Charles Bryant, Robert Z Leonard, 1920). A lost movie, what survives is the first known photo of Bhogwan Singh, who plays Charles Bryant’s faithful man servant who follows the customs in Gaya, India, where the story is set.

The next decade he would — while working as a technical advisor in films like South of Suva (Frank Urson, 1922), and Bonnie Scotland (James W. Horne, 1935), a Laurel Hardy film set in India — also set up a perfume shop on Los Angeles’ W 1st Street. His knowledge of perfumes appeared as detailed as his expertise about turbans. Perfumes, he was quoted as saying, should be directly applied to the skin, and had to be matched to suit the actor’s personality.

In all likelihood, his perfume business failed in the Depression of 1929-1934. For some years, Singh, like a handful of other South Asians, lectured on ‘native’ customs and the political situation in then British-ruled India, to a largely American audience. From the 1930s until around 1958, when he was a Hollywood regular especially as a turban wrapper, the casting agencies even had a file on him, for he could play several kinds of Asian characters, and could also draw in other Asians when a larger pool of extras was required.

Bhogwan Singh wasn’t, of course, the only turban wrapper on the scene. Lal Chand Mehra, who came to the University of Berkeley as a student in 1920, doubled up in many roles in reel and real life. He acted in films like the The Rains Came (Clarence Brown, 1939), and Murder over New York (Harry Lachman, 1940). He appeared in radio plays, wrote books, and was popular on the lecture circuit.

Hussain Nasri, one of three turban wrappers in The Rains Came had a shorter career in Hollywood. Nasri served in the US army during World War II, which enabled him legally to seek naturalization. In the 1950s, other turban wrappers and extras emerged: Gurdial Paul Singh, a research scholar at the University of Southern California, and Chanan Singh Sohi, who teamed up with Bhogwan Singh, as one of two priests in the film, Road to Bali (Hal Walker, 1952).

Marginal and uncredited, the turban wrappers performed a vital role in these early Hollywood films, giving scenes a certain credibility and therefore helping them reach a wider audience. Bhogwan Singh died in 1962. Unlike some of his compatriots, who would occasionally visit their native country, especially once citizenship had been granted in 1945, Bhogwan Singh never did return to India. His papers show that he had a wife and son in India. However, he chose to make Los Angeles his home, living in different parts of the city throughout his life, and thriving in his role as a much-needed Hollywood hand.

Declaration of Naturalisation. Accessed on Ancestry.com

Kumar, Anu. “How the Legend of the Phantom, the Original Comic Book Superhero was created”. Scroll.in. 5 May 2016.