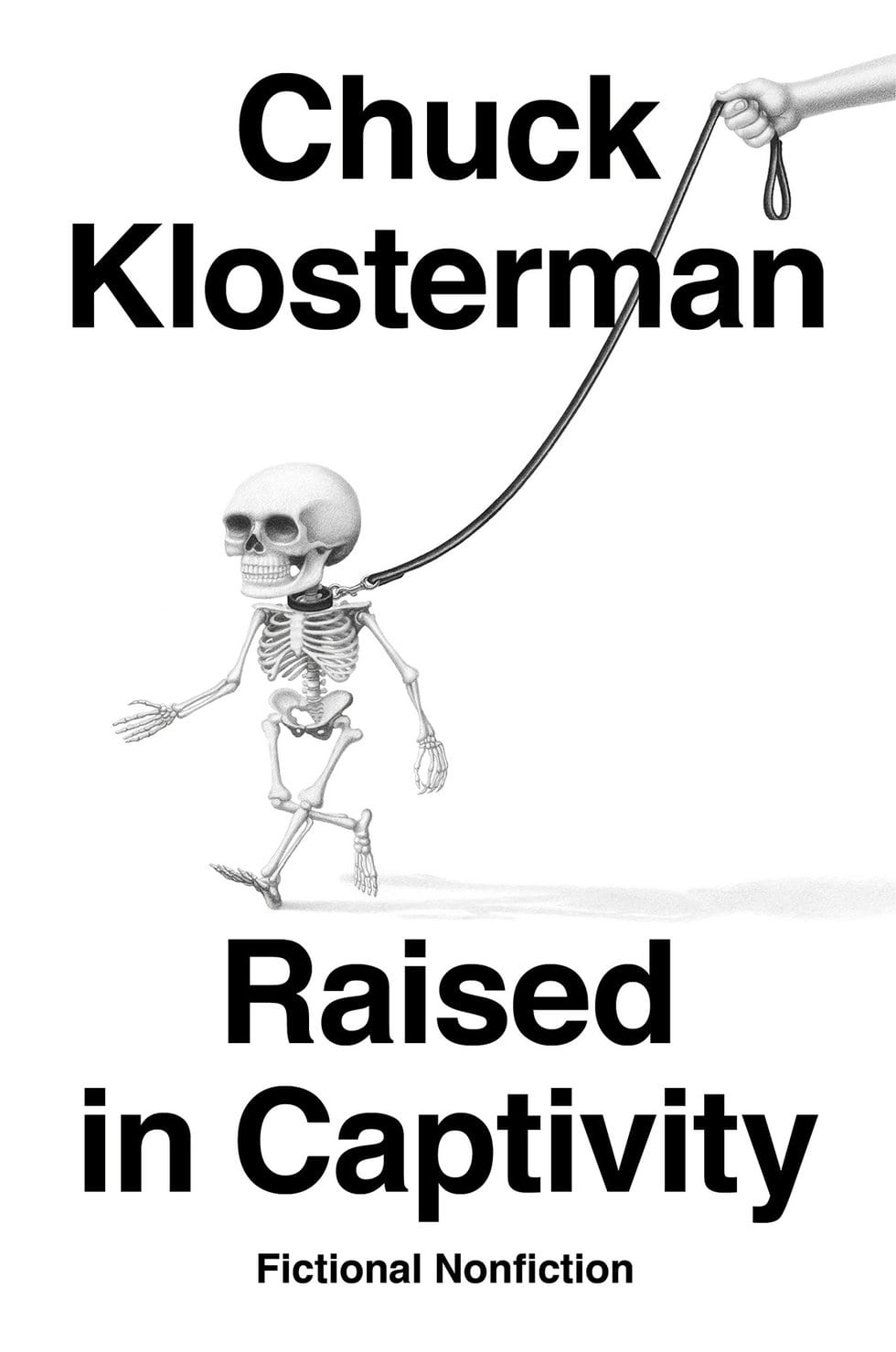 Not only is Chuck Klosterman one of those writers whose distinctive style gets lodged in your brain, but one whose ideas initiate fresh and often zany manners of thinking you might not have encountered if you hadn’t read him. His brand of junk-food intellectualism weaves together disparate pop-culture subject matter (e.g., comparing Kurt Cobain to cult leader David Koresh) in prose that’s both blunt and conversational.

Klosterman’s latest book, Raised In Captivity, is sort of his third foray into fiction; though he is best known as an essayist, he has published two previous novels, one about eccentric life in a small town and one about a man who can turn invisible. All of the very short stories in Raised In Captivity are fictional, but the overall effect falls close to his essays and even closer to his HYPERtheticals card collection of outlandish hypothetical situations meant to stimulate ridiculous conversations. The sketches eschew character depth for a focus on the ideas rooted in the bizarre scenarios he presents (a move made obvious by his decision to give characters names like Cookie Dupree and Henry Skrabble).

In “The Enemy Within”, a woman is taken captive and interviewed about whether her boyfriend is “Fake Woke”, a claim that causes her to break down in tears. In “Rhinoceros”, a counterculture couple use a complex algorithm to permanently delete Wikipedia entries, wiping out the pages on Robert E. Lee, Margaret Sanger, and the Smashing pumpkins. In “Skin”, a man breaks up with his girlfriend over an expensive meal after hearing over the radio that “you cannot… begin weeping while tasting something new and delicious”, a statement that, of course, proves to be false. On and on the scenarios go, 34 in total.

Many of the quandaries Klosterman presents are comments on the times we live in. One of the collection’s most pertinent sketches, “Toxic Actuality”, includes two college professors traversing campus and discussing an altercation one of them had in class with a student who clumsily called him out for being politically incorrect. Klosterman gives the last word not to the professor who claims that students today are living “in a false reality”, but to the one who states that “There is no real world…. Or at least not a world any realer than this one”:

“Yes,” said Geoffrey. “That’s how it works now, and that’s how it has always worked. You need to get over this.” And that was the end of the walk.

On first read, some stories are so spit-take funny that the fundamental questions driving them are almost obscured by their downright nuttiness. Such is the case with “(An Excerpt from) A Life That Wasn’t Mine“, which details the filming of a Syfy Channel-style Loch Ness Monster movie that somehow morphs into a deeply experimental film about Jimmy Page summoning the spirit of Aleister Crowley and “using mind bullets to murder Keith Richards of the Rolling Stones.” The wackiness is caked on extra thick when the story’s protagonist attempts to explain the movie’s constantly changing plot:

The story was now told from the perspective of a nosy neighbor with a biracial love interest. A decomposing woodchuck played a key narrative role. The new script was only eleven pages long, but projected to transmute into a 150-minute movie. I recall numerous dream sequences and one seamless Steadicam shot of the Page character wordlessly skulking about his residence for more than nine minutes, set against the seventeenth-century composition “Sonata per Chitarra, Violino e Basso Continuo,” an Italian classical piece some believe to be the sonic inspiration for “Stairway to Heaven.”

The absurdist tale arguably beats out Donald Barthelme’s classic short story, “L’Lapse”, about an equally grandiose and nonsensical film. The crux of Klosterman’s story, though, revolves around the protagonist’s struggle to acquire Jimmy Page’s life rights in order to keep the project from being sued for defamation. When this feat proves impossible, the movie’s director threatens to kill Jimmy Page, exclaiming, “Who is to say who owns a life?… A person’s story belongs to whoever has the testicles to make that story exist.” The piece is yet another comment on celebrity life from a man who has interviewed and written about countless celebrities, including Jimmy Page.

The short-fiction format employed throughout the book offers Klosterman a fresh way to write on many of the same subjects he tackles in his nonfiction, so it makes sense that the best stories in Raised in Captivity are the ones that most closely resemble thinly-veiled essays. The front cover deems these stories “Fictional Nonfiction”, a clunky term that seems too much like a far-reaching marketing device. Really, this is just Klosterman being Klosterman, witty and perceptive in his doggedly consistent way. The approach is different, but the voice and ideas presented are undoubtedly his, couldn’t come from anyone else, and this is where the book’s value lies.