“It started long ago but not far away,” says author Mary Lee Kortes, speaking from her Brooklyn home about her new book, Dreaming of Dylan: 115 Dreams About Bob Dylan. (The book may be ordered here or here.) The collection arrives 13 November via BMG’s book division. The title itself is a loving nod to Dylan’s tune, “Bob Dylan’s 115th Dream”, recorded for his 1965 LP, Bringing It All Back Home.

Kortes, who recorded a song-by-song re-creation of Dylan’s 1975 Blood on the Tracks with her band, Mary Lee’s Corvette, in 2002, says she’s been dreaming of Hibbing, Minnesota’s favorite son for a long time. “They’re always super-positive,” she says. “I wake up the next day and I’m walking around in this cloud of ecstasy because Bob Dylan knows me and has told me great things about myself.”

Kortes quickly transformed that feeling into something more. One day, she recalls, it occurred to her that she was probably not the only person dreaming of the man some call Zimmy. One idea begat another and soon she thought, “Wouldn’t it be interesting to read a collection of peoples’ dreams about him?”

She posted her idea at the exhaustive Dylan fan site Expecting Rain.com and was soon flooded with responses. At some point, she wondered if it might be appropriate to accompany the text with visuals. Soon illustrations and more came in. Armed with roughly 60 recollections at first, she was soon sidetracked until a fateful meeting with her music publisher.

BMG it turns out was starting its own book wing, dedicated to volumes related to music. Kortes couldn’t resist sharing her idea.

Her relationship with Dylan exists in more than dreams, however. Before she released her Blood on the Tracks set, she called his publisher, asking for permission to issues the songs. The publisher, she says, was already aware of her. Eventually, she opened at some of his gigs. “It’s been a nice relationship,” Kortes offers.

She started collecting more dreams from friends or friends of friends. Soon, Patti Smith offered up some original lines. That relationship, too, is one that is part of a larger arc. “She’s sort of accidentally blessed me a few times,” Kortes says. “My very first guitar at the Guitar Show in New York City. It used to be at this church in the East Village. I was there and she was there with Lenny Kaye, who I know. Lenny introduced us and I said, ‘I just bought my first guitar!’ As I was leaving, she was outside, standing on the corner, talking on a payphone. I walked by her and she said, ‘Good luck with that guitar!’ I thought, ‘I’ve been blessed by the goddess!'” 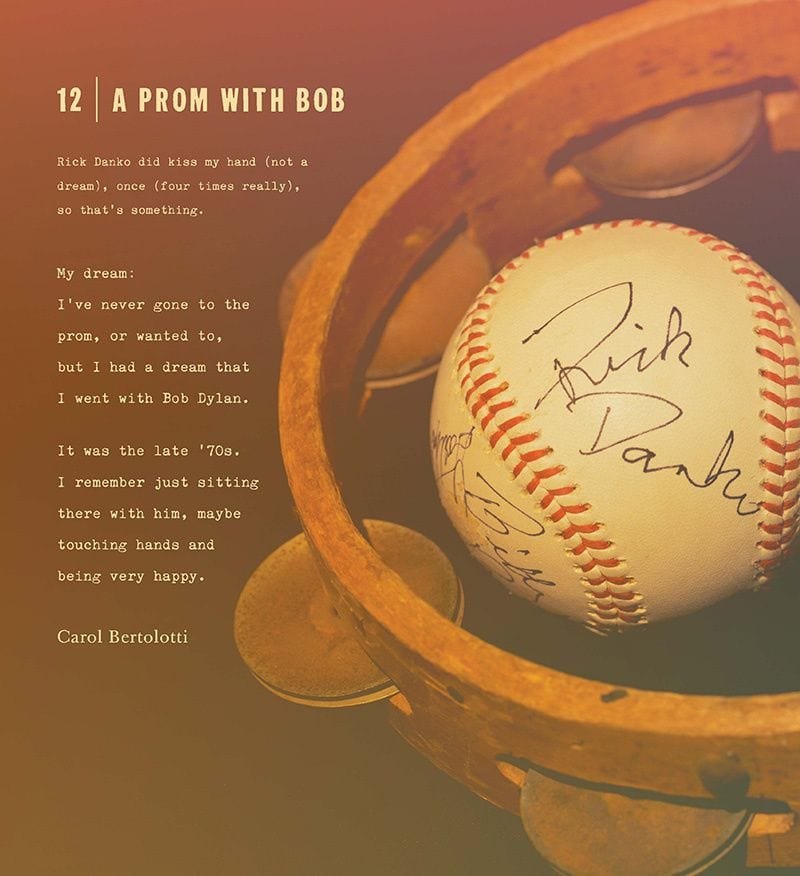 Some patterns emerged among the contributions. Water and boats make multiple appearances, as do fish and Hank Williams and even bathrooms. And, she adds, “there are some about people who are on stage with him, about to play, and they forget the song or they realize they can’t actually play the instrument. Things like that.”

Asked if she remembers when she first became aware of Dylan, Kortes says, “I don’t know. He’s one of those people where you ask, ‘When was he not there?’ I’m not a completist or a scholar. People assume that about me because of Blood on the Tracks and I’ve certainly had periods when all I wanted to listen to was Bob Dylan. But it’s not always what people expect.” 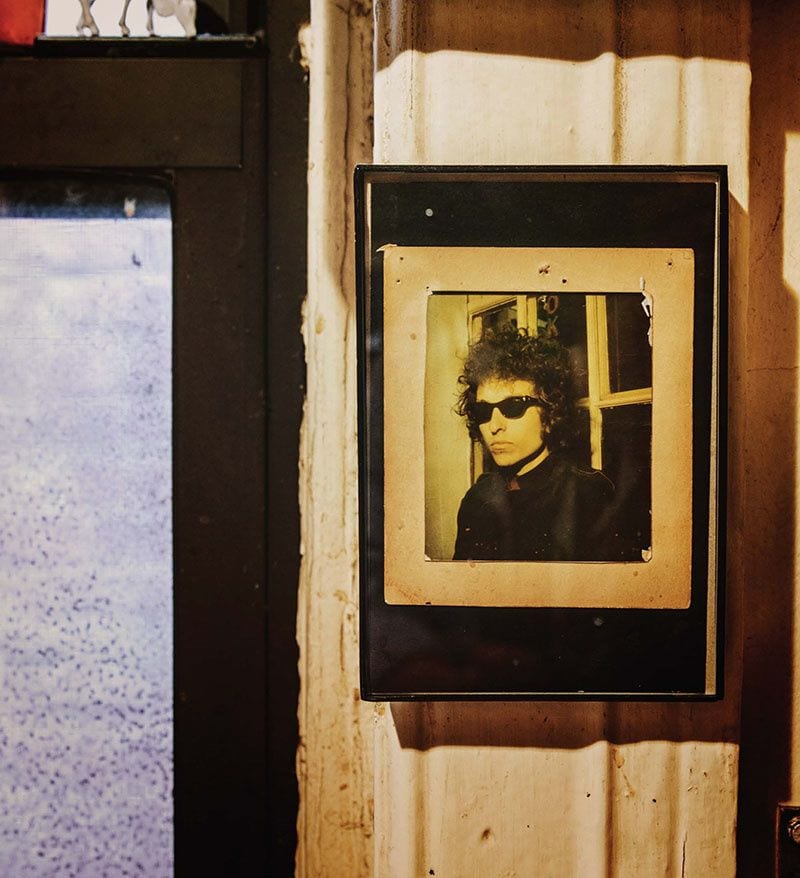 In the end, the book is a testament to Kortes’ perseverance as much as her ongoing relationship with Dylan, whether in the dream or material world. She has it on strong authority that he’s seen some of the work. “I don’t know what his reaction was, if any, but I think he would be touched,” she says.

In addition to the book, Kortes is issuing a new song titled “Dreaming of Him”. She says, “The lyric is inspired by images from the dreams. I just wrote this song about all the things that happened in my dreams of him.” 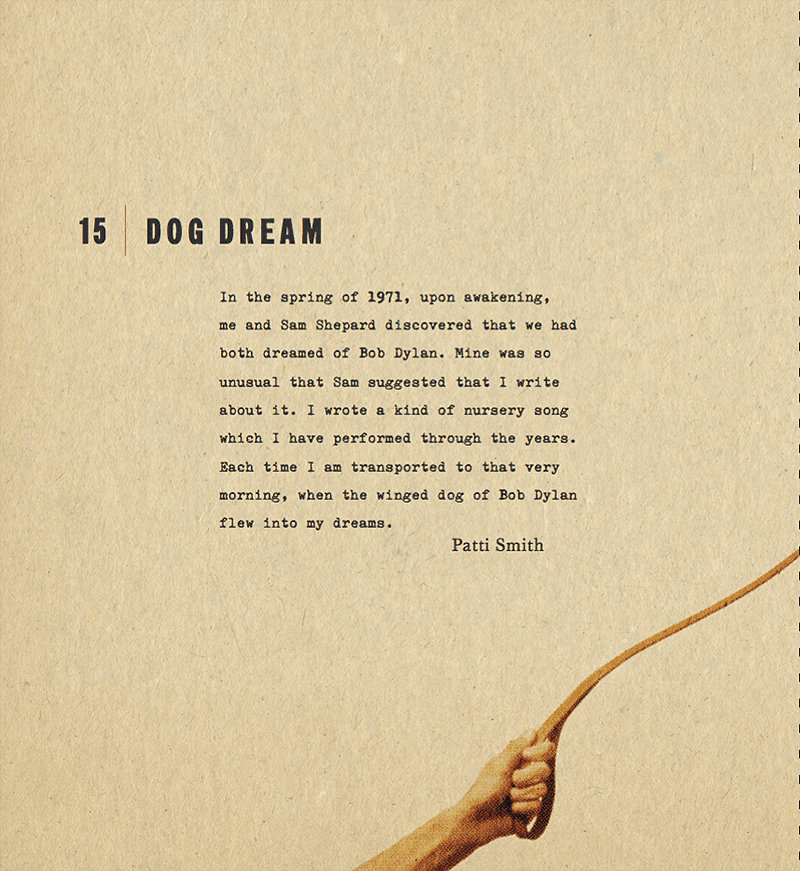