The “O” in O. Schrauwen is for “Olivier”—or possibly “Olver”, or the nickname “Oly”, or even “Ooh-lee”, depending on which of Schaurwen’s parallel lives you’re inclined to believe. The Flemish artist-writer goes by “Ollie” at his blog, but that real-world identity isn’t one of the six featured in his (or sometimes her) collection of genre-interrogating science fiction tales. These varied Schaurwens are abducted by aliens, cryogenically frozen and reanimated, stalked by a mysterious Mr. Yellow, contacted through time-travel video broadcasts, and cartoonified and later trolled via cerebral cortex nanocomputers.

They also have a lot of sex. One futuristic Schrauwen experiences an alien “miniature iron maiden” designed to collect his semen to breed hybrid alien-human children. Another has sex with his estranged girlfriend while running a Cartoonify program that makes him feel like a “virtuoso balloon animal artist, showing off his tricks.” Yet another, stranded on an alien planet without their hormone-regulating meditrons and hypersexual-field group sexotron, tries two-person, genitalic sex, which they and their partner find “far inferior” with an “uneventful build-up” and a “superficial” orgasm.

But despite the sometimes literal focus on genitalia, these stories of “O” are far from erotica. The actual Schrauwen is playfully undermining not just genre, but gender too. Though the large-breasted Ooh-lee has a penis, she is a she, and though the reanimated Olivier is exploring the “archaic notion of the self”, they and their companions understand themselves as sexual and yet genderless “organs in a body”.

If these future worlds sound dystopic, the effect is more utopic—at least in contrast to the contemporary norms they critique. While lampooning sex, Schrauwen also mocks the related gender roles of traditional science fiction tropes. The sixth and longest tale is a riff on Tarzan, with Olivier having to explain to his girlfriend, “I am the hero here; you’re a woman with an uneven chest, and of no consequence to the story.” They both laugh uproariously, before she remarks how odd it is that the hero in “ancient adventure stories” is so often alone, since “group-heroism seems more enjoyable and meaningful.”

Moving beyond genre, Schrauwen delves even deeper into the comics form, using each story to interrogate some norm readers otherwise take for granted. While “Greys” refers to grey-skinned aliens, the story is rendered entirely in grey tones, as Schrauwen introduces himself as a graphic novelist presenting a personal memoir using yet another kind of grey: “I chose to tell this story in the comics form [because] I believe that precisely in this grey area — the overlap between what can be said with words and what’s best shown with images — lies the language that can truly convey the profound mystery of the events.”

Of course, Schaurwen—meaning either his narrating pseudo-self or the actual author—conveys nothing of the sort, offering an absurdly abstract sketch as a supposed “visual approximation of the fear he felt” because his emotions are “best expressed in a more abstract way.” He also enjoys the occasional visual metaphor, with an erupting volcano illustrating “I came.” Despite drawing correspondingly blank panels for gaps in his memory, he still concludes with the “hope that by working in the comics medium I have managed to shed light on particularities that would be impossible to convey in any other medium.” 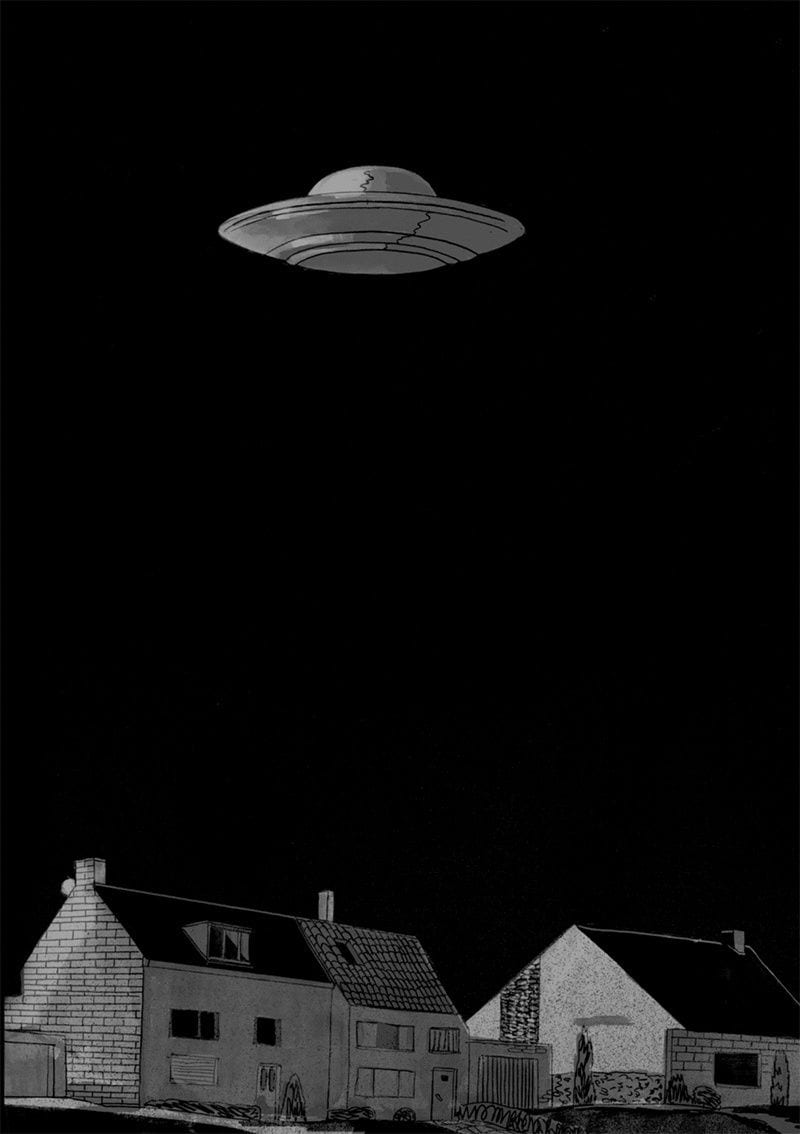 “Cartoonify” pushes the stylistic norms of that medium further by literalizing artistic effects through the sci-fi premise of a downloadable brain ap. When Schrauwen is running Cartoonify, “small details — moles, dimples — have disappeared. Other, more pronounced physical traits seem exaggerated, making it “much easier to find his way around this simplified body.” The images vary according to how high a “level of cartoonishness” each character prefers, reducing dangerous physical injuries to bloodless bumps and emotional relationships to superficial entertainment. The analysis can be applied to any comic drawn anywhere along the continuum of extreme caricature to photorealism, with each artistic choice defining the psychological effect of its content on a reader.

“The Scatman” offers a similar sci-fi analysis of the word-half of comics image-texts. The transgender Schrauwen suffers from a troll who hacks into her brain hardware and “acts like a narrator. Like a writer telling my life story.” When her friend responds, “So it’s telling you what you’re doing, while you’re doing it, in a prosaic way?” Schrauwen is critiquing the redundancy of comics that use words and images to express the same idea simultaneously — a norm of Golden Age comics and often an unfortunately continuous trend in many since. It’s no coincidence that this Schrauwen unmasks her tormentor while singing nonsense scat syllables on stage.

“Space Bodies” continues the critique, as the next narrating Schrauwen explains that he is “Storytelling”: “I’m relaying what is happening to me in the form of a first-person narrative”, which is recorded by an omni-cam and sent “back in time and converted to an ancient medium”—literally the comic book in the reader’s hand. “Hello” interrogates the comics grid by using a gutterless 6×4 layout that variously expands into larger panels by variously eliminating the single frame line separating images. “Mister Yellow” instead employs a similar but rigid 10×7 grid, telling its entire story in 140 panels that span only two pages. “Cartoonify,” in contrast, includes only 90 panels but spreads them across ten pages. 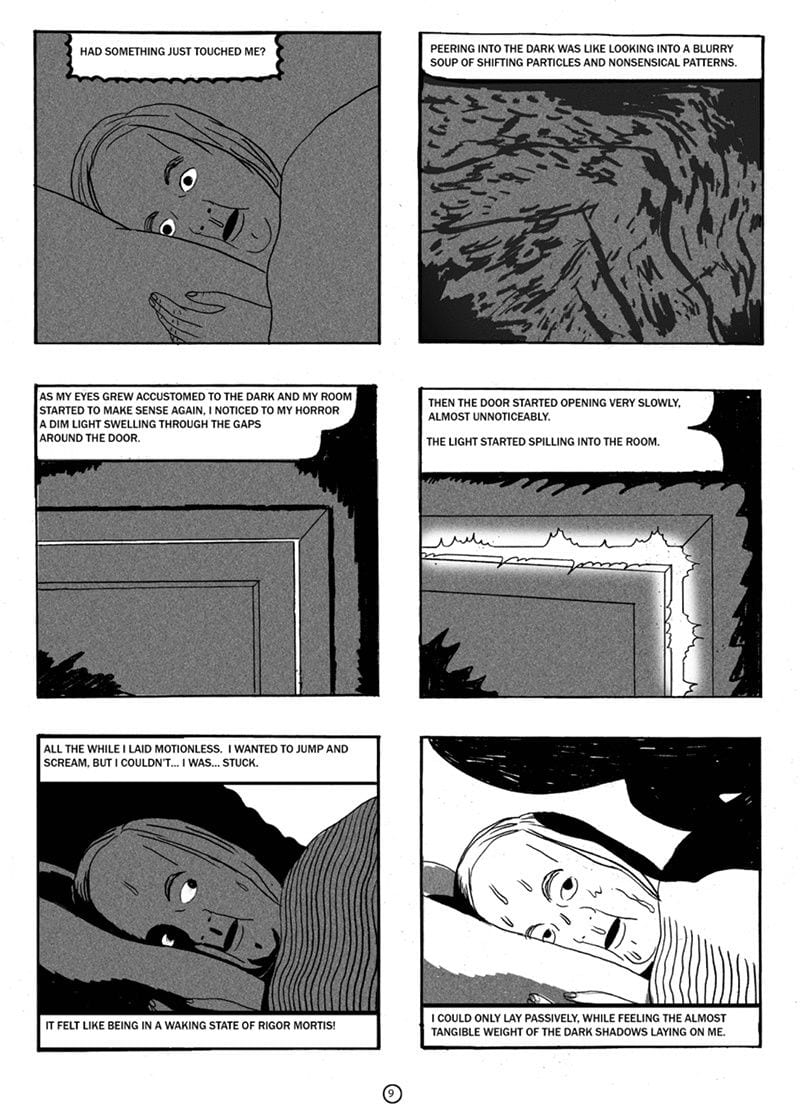 In short, Schrauwen literally draws attention to the basic building blocks of comics, science fiction, and our cultural sexual norms. While it’s rare for a creator to address even one of these underlying structures of form, genre, or gender, Schrauwen and his team of parallel selves tackle all three for insightfully entertaining results. 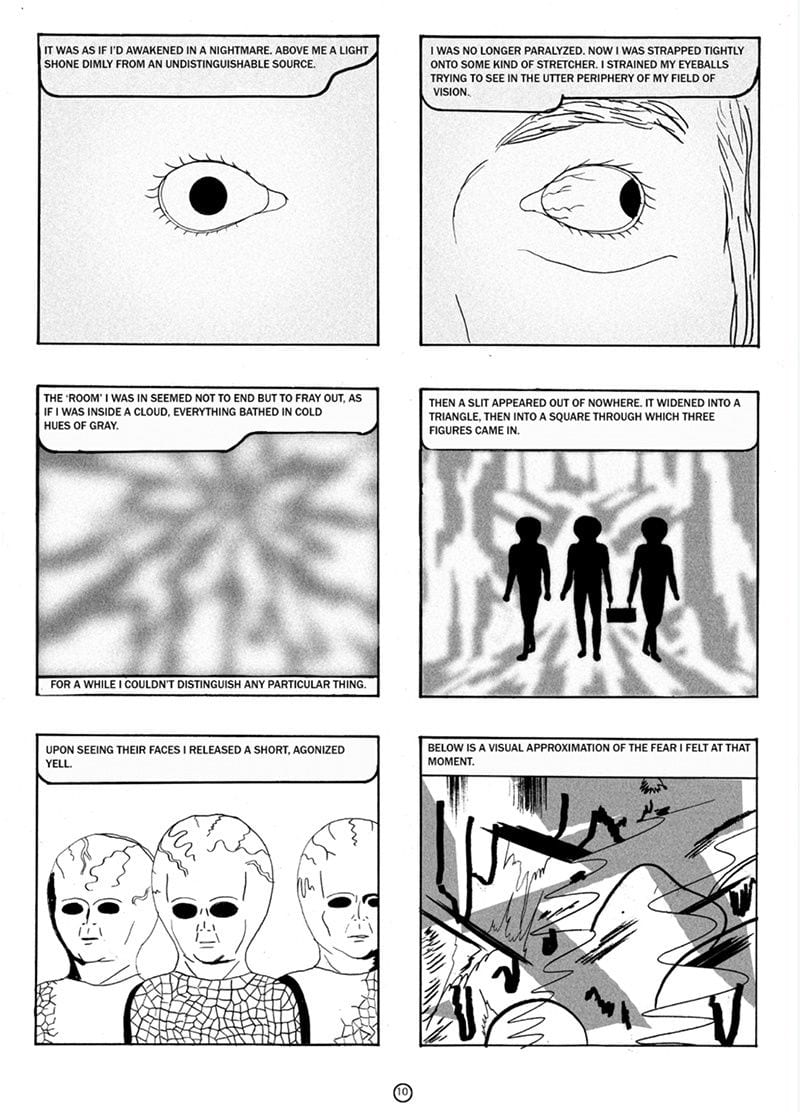