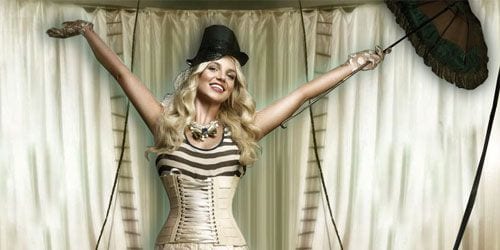 The allusion in the album title is too obvious to ignore: Circus = media circus, or the swarm of photographers, journalists, television producers, music critics (hello!) and Wikipedia editors that have been keeping track of Britney Spears’ every move. It’s no small wonder, then, that her 27-year-old life gives the impression of a diamond-studded roller coaster. We know more about Britney than we do about our second cousins, following her through multi-platinum album sales, video awards ceremonies, high-profile relationships, high-profile breakups, child custody battles, rehab stints, psychological meltdowns, and one very shaved head. The media giveth and the media taketh away. Whether they’re painting a glamorous or a demoralizing picture of her on any particular day, her career is so inextricably tied to the press that it’s difficult to imagine how she would manage if it simply ceased to exist.

Has Spears ever cogitated over this possibility? Hard to say, but I doubt she was thinking so philosophically in the years between 2003’s In the Zone and 2007’s Blackout. This was an unusually ugly period for Spears, fraught with the kind of sensationalist celebrity comeuppance stories that keep tabloids in business, and culminating in a nationally televised attack on a paparazzo with a folded umbrella. Blackout was really the first time she went toe-to-toe with the popular media in her music: inside the CD booklet was a photograph of pages ripped from tabloids and strewn about the floor like trash, and several tracks spat bald-faced threats to the paparazzi, making me wonder if Blackout was a reference to what she’d give to people if they started barking up the wrong tree. Incredibly, Blackout worked. It was her producers’ success more than hers, but they equipped her with effectively icy-hot backdrops that matched her confrontational stance, and because it didn’t arrive with the media blitz that typically accompanies a Spears record (perhaps on principle), it wasn’t a widely broadcasted temper tantrum but a single silenced shot with a poison dart.

Released just 13 months after Blackout, Circus catches Spears on a relative upswing, still recovering from losing custody of her children to ex-husband Kevin Federline, but flush from Blackout‘s positive critical reception and the release of her MTV documentary, For the Record. And indeed, we see a side of her here that’s more comfortable with being in the limelight. Where Blackout‘s hater-baiting “Piece of Me” attempted to fend off her audience, Circus‘s title track and second single courts it: “I feel the adrenaline moving through my veins / Spotlight on me and I’m ready to break / I’m like a performer, the dancefloor is my stage / Better be ready, hope you feel the same.” Maybe it’s a trap — what happens when the same lighting operators capture her in an ignominious moment? — but for now the sentiment seems real, especially given how convincingly she spoke of her passion for performing in For the Record. So Circus comes across as Blackout‘s de facto sequel, one that allows her to restore order, revel in the privilege of worrying about pettier problems (e.g. partying too hard), and continue scaling her way to the apex of the dance-pop pantheon.

In truth, Spears’ output is far too erratic to keep her in the throne for long. But we’d be forgiven for accepting “Kill the Lights” producer Danja’s claim that Spears is the queen of pop upon first playing the disc, which busts out of the gate with two singles that rival anything she’s done. “Womanizer” is a meaty, high-voltage shuffler helmed by Atlanta duo the Outsyders, who do an admirable job of recreating the chemistry of Spears and Danja on last year’s single “Gimme More”. Indeed, “Womanizer” sounds quite a bit like “Gimme More” on recreational stimulants. It’s a kiss-off, of course; Spears thumbs her nose at the men who walk into a club, entitled, and end up with nothing in the pursuit of everything (maybe you know someone like that?). Then comes the second punch: “Circus” imagines her in the middle of a kind of chiaroscuro laser light show, with thousands of people staring wide-eyed at her in the split second before she kills them with the performance of her life. The music slides, cracks, inhales in anticipation and explodes, and somehow sounds dense and amazingly expansive at once. So, to review: one song dropkicks the dudes (perhaps the same ones who might have kept the single from topping the Hot 100) out the exit door, and the other launches her straight past them to clutch the brass ring. It’s brilliant.

Unfortunately, what follows is a very large mid-album slump consisting of waterlogged filler and degraded carbon copies of past achievements. Perhaps to ward off criticism that she only plays a bit part in the creation of her own songs, she’s made it known that she wrote much of Circus herself, and judging from the bumper crop of similar-sounding skronk, that’s probably accurate. On “Kill the Lights”, “Shattered Glass” and the punning “If U Seek Amy” (say it out loud), she reveals her proclivity for the same stomping, unsubtle beefiness of “Womanizer”, but there’s a notable lapse in quality, as if some of “Womanizer”‘s strategists forgot to show up to the planning meeting. Credit Spears for grabbing the reins this time, but without the Outsyders’ A-list production values it’s a questionable look for her, and she’s been much sexier. The nearly-emo “Out from Under” and “Unusual You” try for heartfelt and come off flabby. “Blur” is almost laughable as the album’s token “regret” track; the music benefits from a sultry R&B afterglow, but the lyrics, in nuce, are ‘Shit, what in the hey did I do last night? / Everything is just a blur’.

Tune out after “Blur”, though, and you’ll miss the record’s unexpected wallop of an ending. If the two kickoff singles are clearly dressed to impress, these late-album stunners demonstrate what Spears is capable of when nobody’s watching. “Mannequin” stutters and glides like an ice cube on a hotplate while the lyrics cleverly mirror the motion: “I like it and I do what I like and you do what I like and you like it” in an unbroken downward glissando. The disco throwback “Lace and Leather” actually recalls Kathy Diamond’s criminally underrated Miss Diamond to You from 2007, all tactile slap bass, glitter, and clacking heels against the tiled floor.

And then, in an unbelievable twist of fate, the album ends (if you don’t count the bonus track “Radar” from Blackout) with the boneless lullaby “My Baby”. Her baby in this case isn’t a new boo following Kevin Federline, but her actual baby, Jayden, born in 2006 as the second Spears child and the second one handed to Federline in a 2008 custody settlement. “Tiny hands”, she sings, “Yes that’s you / And all you show / It’s simply true / I smell your breath / It makes me cry / I wonder how / I’ve lived my life”. Big jump from “Womanizer”, but that’s not what makes “My Baby” so surprising. It’s the way she sings it: like a seven-year-old child sitting on the floor with her legs splayed outward, playing with the baby underneath the mobile. She lets her naked soubrette — a vocal part that carries less weight than a typical soprano — shine, and it’s upon hearing it that it dawns on us just how awful she sounds when she’s unencumbered and de-sexed. I wasn’t sure whether to cringe or cry (did this critic get a little misty? You’ll never know for sure), but Spears clearly put herself on the line here, risking critical contempt for the sake of laying her emotions bare.

So it seems she does have them, even on record, but her moments of depth and vulnerability don’t hit with the same force as her shallower crowd-pleasers. When I reviewed Blackout for my college paper, I noted that Spears wouldn’t lay claim to an unequivocally successful album until she allowed more of her humanity to peek through the glamour and glitz. Circus gets me closer to realizing that this probably isn’t going to happen, but perhaps I’m expecting too much. For Spears, music appears to be an escape — the reality she wants rather than the one she has — and even the idea of a circus speaks to a regressive fantasy world where the dangers are staged and the beasts can’t hurt you. To that end, I suppose, Spears has won. Not everything hits the target, even with her hands gripped tightly around the controls, but she’s offered us something intermittently wonderful that proves she can still black us out even when she’s on the up and up.