There’s little in Chris Ware’s comics that goes unexplored; sadness, disappointment, joy, love, among others are all represented, though he does tend toward the more hopeless than the hopeful. Still, they all exist in Ware’s stories, and it’s an approach that often leads the reader to simultaneously run through an emotionally fraught story while also reveling in the meticulous drawing style he’s perfected. His comic Rusty Brown, published over almost two decades and reprinted in this edition from Pantheon, is just a little different in that it brings forth more hope through one character’s story.

Brought together by their connection to a school, and taking place over many years, the story centers on a handful of characters that intersect in both meaningful and mundane ways. The story begins with the first day at the school for two siblings (Alice and Chalky White), who’ve recently lost their mother. This is set in Omaha, Nebraska in the 1970s. It convesy the lives of teacher Woody Brown (Rusty Brown’s father), fellow student and bully Jason Lint, and Joanne Cole, a black teacher in the predominantly white school.

Like most of Ware’s characters, Woody is unhappy, and that unhappiness has led him to ignore his son and consider leaving his family. It’s only in the story of his younger years, when he was a struggling science fiction writer and in a dysfunctional relationship with a woman from his day job, that more is revealed about his true passion and ambition. In an extended glimpse into one of Woody’s stories, his hero is an astronaut tasked with creating a sustainable society in space along with a small group of fellow astronauts. Things inevitably go awry and his protagonist is left a lonely, bitter old man in space.

More than a metaphor for how Woody feels, both in the past (when it was his greatest fear) and in the present (when it feels inevitable), Ware’s vision of storytelling is display. His gift for jumping between narratives and through time while still maintaining a coherent overall story is not easy to achieve, yet he does so with inventive panels and thoughtful shifts in artistic style.

Though the story begins with the siblings and Woody, full treatment goes toward the characters Jason and Joanne. Jason’s life is told from his birth to his death, beginning with an almost abstract representation of his infancy. The ongoing theme of Jason’s story is his inability to maintain happiness, again an ongoing theme in Ware’s work. He sabotages relationships, is an alcoholic with varying periods of sobriety, and is estranged from his children. Every opportunity that he’s given to make his life better is invariably ruined by his own propensity to see himself as a victim or wronged in some way. 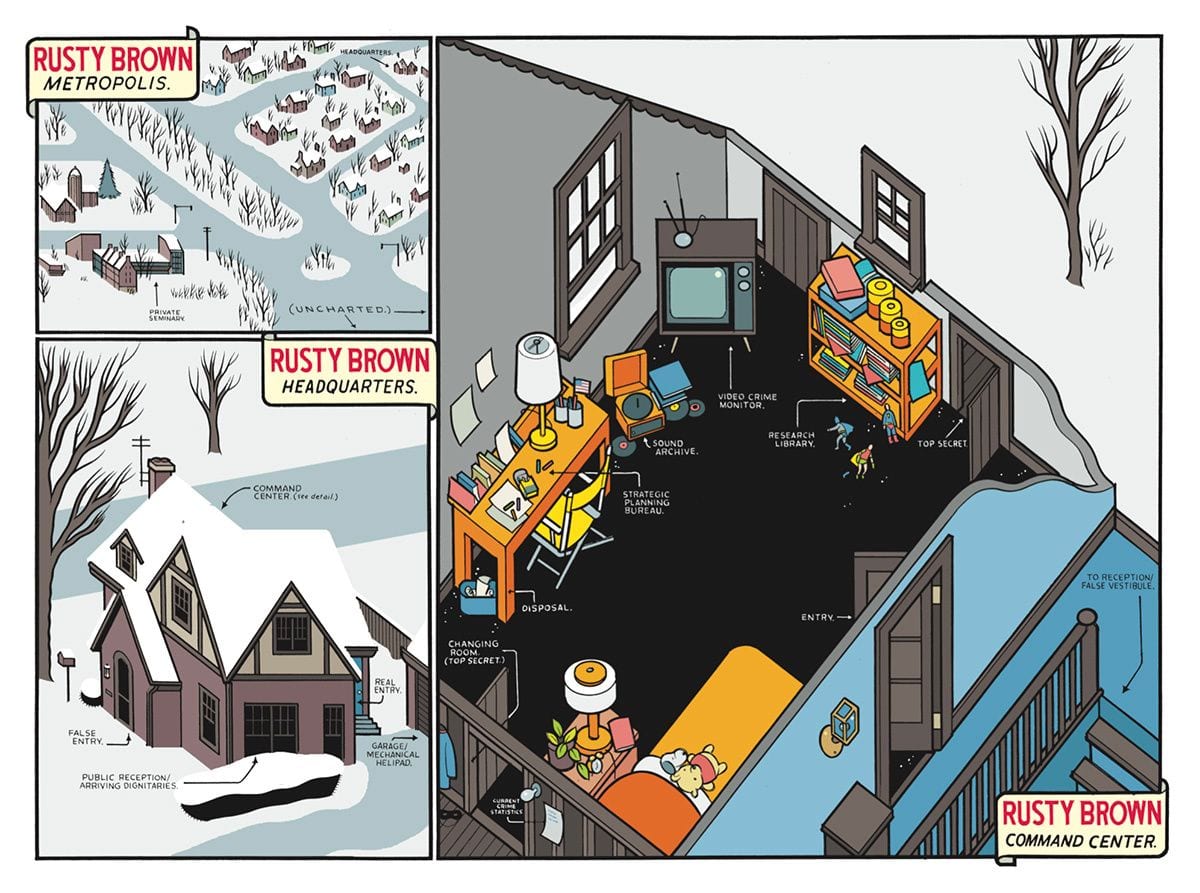 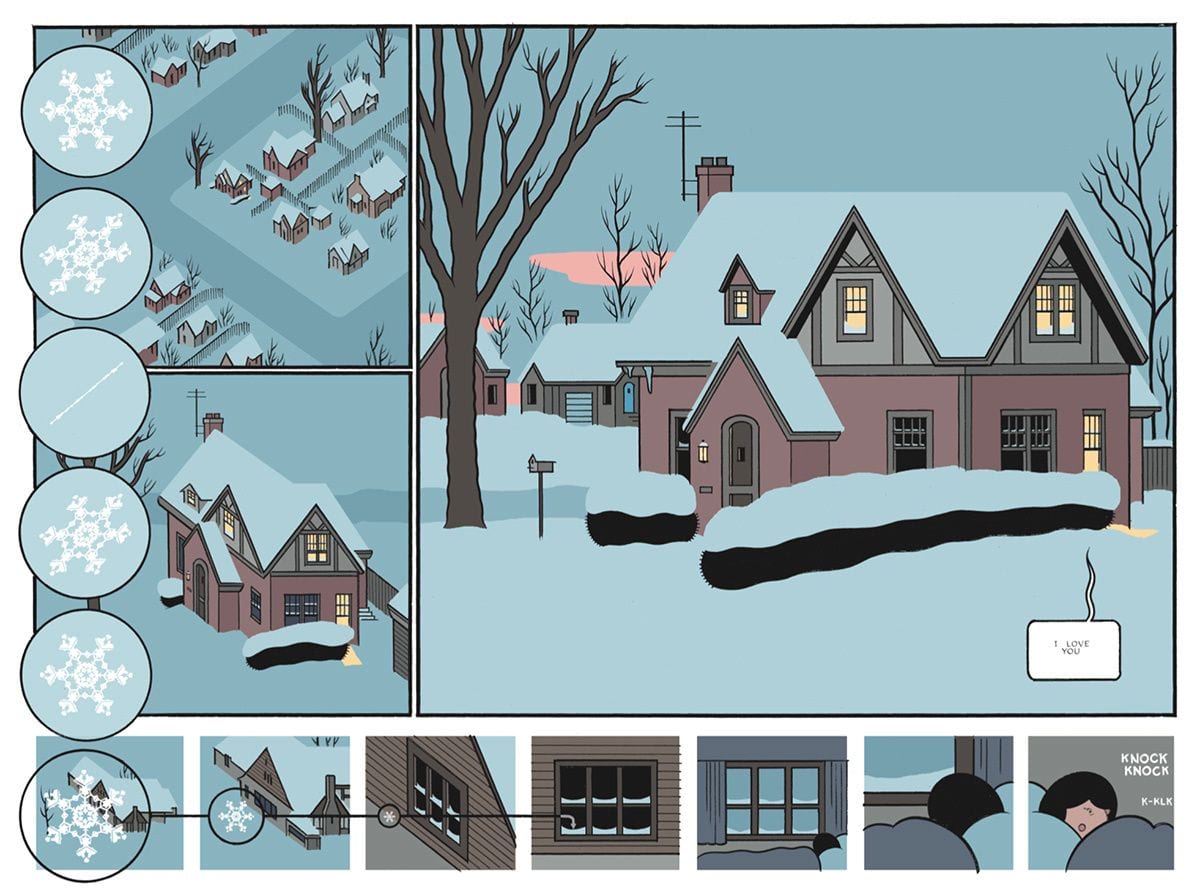 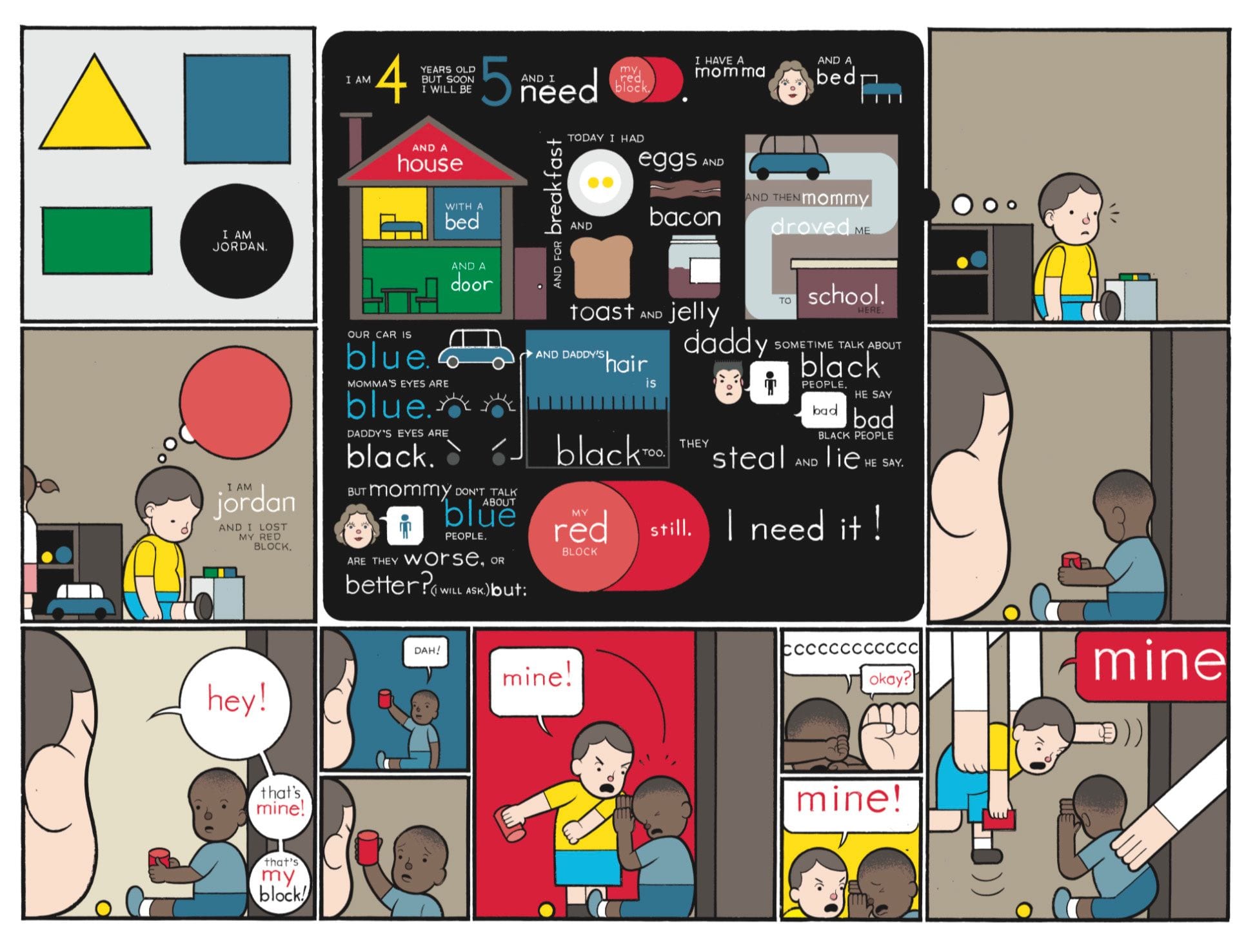 Perhaps best exemplified in his reaction to his gay son’s harrowing memoir, where he’s highlighted in a cruel and abusive story, Jason sues his son instead of owning up to his abuse of his son, creating even more chaos in his life. Ware’s depiction Jason’s realization of what he did is a departure from his usual style. Instead of the intricate detail he’s known for, Ware draws that moment with a much more expressionistic, and ultimately visceral, technique, and it’s one of the most memorable moments in the book.

In direct contrast to Jason, Joanne is undoubtedly good. She not only acts as caretaker for her elderly mother, but she also genuinely cares for her students, all the while putting herself second. Joanne contends with racism, both subtle and overt, and being put on administrative work during her later years at the school when she’d much rather remain in the classroom. While a teacher she crosses paths with Rusty and Chalky as third grade students in her class. Jason is a troublemaker, and Woody is kid. Joanne’s ability to find not only fulfillment, but joy in her students and her unexpected banjo hobby is the brightest spot in the book. Though Joanne doesn’t escape Ware’s bleak outlook, she’s a genuinely good person trying to do the right things.

There’s also pain in Joanne’s life, from secrets in her past to feeling unappreciated to the small moments of disappointment in her life. It’s these seemingly minor moments that Ware articulates so well. When Joanne’s banjo party is attended by only one teacher (Mr. Ware, no less) the work and enthusiasm she’s put into the gathering are heartbreaking. The comic perfectly conveys hermixture of embarrassment, disappointment, and determination to move forward.

In some ways, this vignette encapsulates who she is. Joanne may be dealt some difficulties in her life, but she’s always willing to keep going, rather than succumb to disappointment. It’s a contrast that elevates her above the other characters in the book, as she’s able to carve out a life of contentment and find moments of happiness by sheer will.

Ware’s talent as a cartoon storyteller is never in question, regardless of subject matter, but Rusty Brown still stands out as among his most affecting stories. Though much of the book’s content had previously been published, the larger Joanne story is new. Regardless, it’s the compilation of stories into one larger narrative that makes Rusty Brown yet another unmissable Chris Ware release.