One of the pleasures of rediscovering silent cinema is learning about titles and people you’ve always heard about but were, until now, never able to see. Then there’s the opposite pleasure: finding things you’ve absolutely never heard of. The Douglas MacLean Collection, an on-demand DVD from Undercrank Productions, falls into the second category, because virtually nobody today knows about comic actor MacLean.

As the package states, MacLean’s heyday in the early 1920s found him cranking out almost as many features as Charlie Chaplin, Buster Keaton, and Harold Lloyd combined, and while his films weren’t smash hits, they didn’t lose money. He became a star under contract to producer Thomas Ince, whose films trumpet the credit “personally supervised by Thomas H. Ince”. According to the notes, MacLean was a leading moneymaker for Ince’s studio.

On the basis of these two movies, MacLean’s persona was a dapper, well-dressed young go-getter with an advertised “million dollar smile” and almost no moral compass. He wasn’t a clown or sad sack like Chaplin or Keaton. His presentable, clean-cut nature made him closer to Lloyd or, as the package states with some justice, the young Douglas Fairbanks but without being that athletic.

While the films are good-natured, their vision of the world is facetious and absurd. The MacLean character’s youthful, presentable yet manipulative and nearly amoral personality underlines their ï status as satires of the cultures depicted. In One a Minute (1921), that’s a small town’s brush with big capitalism and the culture of patent medicines and media ballyhoo. In Bell Boy 13 (shot in 1922 and released January 1923), that’s big city capitalism, the hotel business, the venal nature of romance, and labor relations. Both films define success in terms of bamboozling a father figure into giving MacLean’s characters his money.

While Lloyd could be a brash young man, his moxie was balanced by naïve innocence and purity, especially around women. By contrast, MacLean comes across as a knowing fellow who understands how the world works and is prepared to exploit it, because the young, handsome and charming can get away with anything. Adding to the charm are a few grace notes that show him in over his head for a few moments until he finds his bearings. While Chaplin’s Tramp justified his mischievous larcenies and anarchies by being down and out, MacLean implies that mischief and larceny are endemic to the middle-American character in the Jazz Age, if that’s not too much to extrapolate from two films.

One a Minute, adapted by Joseph Franklin Poland from Fred Jackson’s play, takes its title from P.T. Barnum, who is misquoted by Jimmy Knight (MacLean) as saying there’s a fool born every minute; Barnum said “a sucker”. Jimmy arrives in Centerville, a generic “middle American” name used in many movies (and many states), fresh from having secured a law degree in New York City. As the prettily decorated title cards tell us, that leaves him fit to take over his late father’s drugstore.

On the train, he makes time with pretty Miriam Rogers (Marian De Beck), who says she admires heroes who fight for their beliefs (in magazine stories). He responds that his hero is Abraham Lincoln, who started from nothing and made it to the top. He makes no mention of how Lincoln finished up, and perhaps we’re not meant to think of it. When Jimmy arrives at the station and overhears old-timers gossiping about his washing-out in the big city, he pretends Miriam’s chauffeur-driven car is his own.

The drugstore is about to fold under competition from a chain store across the street, showing that the “Walmart-ing” of America was already a concern in 1921. The millionaire competitor (Andrew Robson), who turns out to be Marian’s papa, is about to buy out a willing Jimmy for chicken feed when, realizing that Miriam is watching the transaction, Jimmy loudly declares that he’ll fight to the last ditch.

Without wasting another second, he throws random ingredients into a foul swill that he plans to advertise as a “universal panacea” — in other words, snake oil. The fact that it tastes bad will make people think it must be good for them. He announces this plan to a beanpole friend, Jingo Pitts (Victor Potel), who owns the struggling local paper. Jingo happily colludes on the scheme and puts out an extra trumpeting the wonder drug. So much for the integrity of the press. 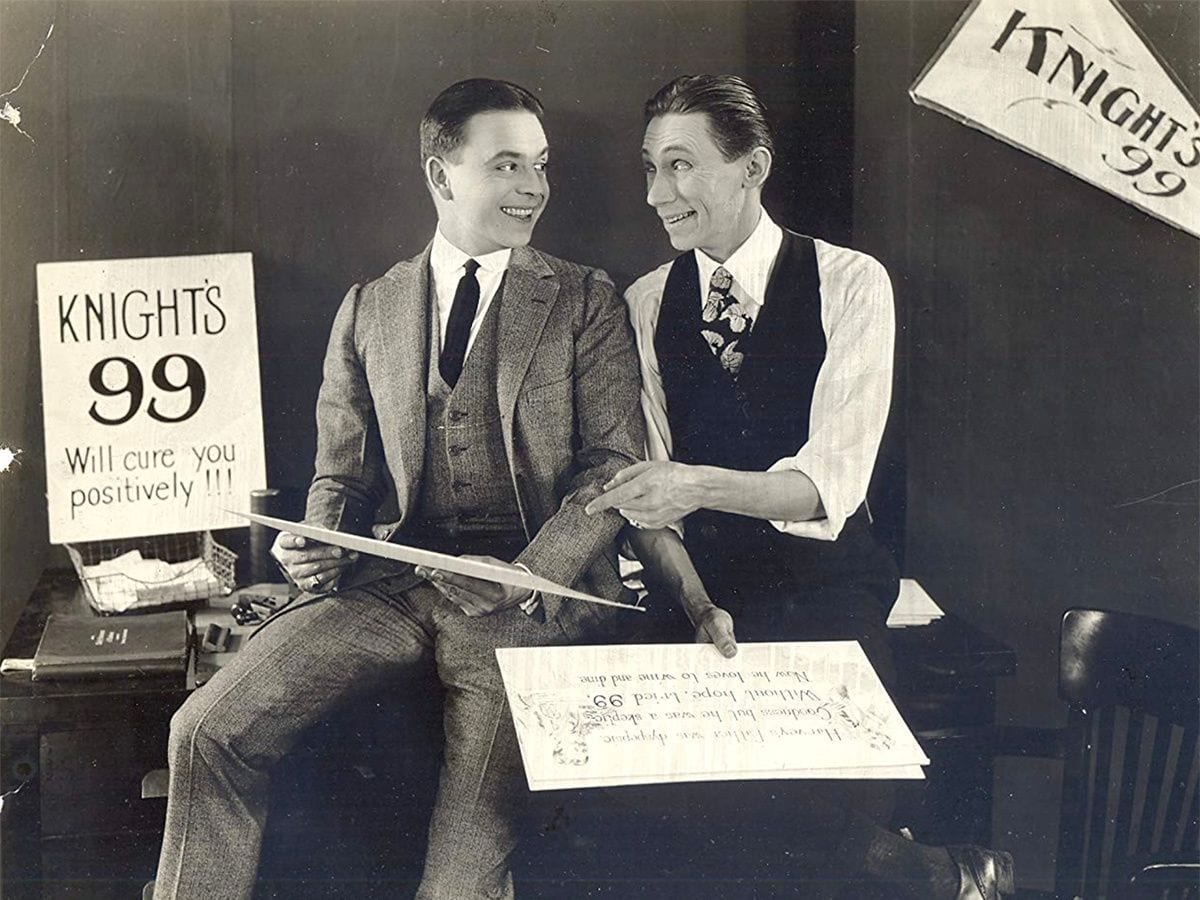 Douglas MacLean and Victor Potel in One a Minute (IMDB)

Is the name Jingo a reference to newspaper jingo-ism? “Some crust!” exclaims Jingo in admiration as Jimmy fixes himself with the local one-man “political machine” to become the next mayor. The one-hour plot goes on from there, and the institutions of law and the courts don’t escape unscathed either.

Modern viewers may be bothered by comic relief from an elderly black man and an elderly Chinese man who testify to the drug’s efficacy; these stereotypes, while patronizing and exploiting dialect, don’t cross into the mean-spirited. The black man is played by the prolific George Reed, whose more than 100 credits include Jim in William Desmond Taylor’s 1920 version of Huckleberry Finn. Bell Boy 13 has a gag at the expense of a Jewish couple who own a store, but they make out all right.

While One a Minute uses Barnum as the model for how to succeed in business and politics, which are shown to be joined at the hip pocket, Bell Boy 13 is the umpteenth variant on the young man who wants to marry an unsuitable girlfriend against the wishes of his guardian.

Written by Violet Clark from a story by Austin Gill, the plot finds Harry Elrod (MacLean) under the thumb of his uncle (John Steppling), who’s also his boss. They live together in a mansion. The uncle won’t let Harry get married to an actress, Kitty Clyde (Margaret Loomis) — who, unlike nice Miriam in the previous film, doesn’t appear especially sweet or virtuous and might be gold-digging for all we know. As encapsulated in the subplot about a little man who keeps trying to lift a packet of bonds from Harry’s pocket, everything’s about the transfer of cash.

The highlight of the brisk 45-minute feature, and the justification of the title, is when Harry gets cut off by his uncle and promptly decides to work as a bellboy in the hotel where he happens to be staying. At one point, he pulls a Lloyd and walks out on the ledge high above the bustling traffic, although it’s only a brief scene. Lloyd’s famous building-climber stunt in Safety Last would be released a few months after this film, and we must wonder if MacLean had advance knowledge of it. If not, perhaps MacLean was influenced by Lloyd’s previous skyscraper stunts in Never Weaken (1921).

The most satirical element in Bell Boy 13 is the class war fomented by Harry after his uncle gets him canned. “Bolshevism!!” exclaims the title card as Harry organizes the bellboys, kitchen staff, and barbers into a fury by rousing them with “Do you want to be crushed under the heel of Capital?” As easily as they can be worked up into a riotous mob, so can they be pacified as soon as Harry finally gets his uncle’s permission to marry — and that’s no spoiler if you’ve ever seen a movie.

“Fellow agitators, we have achieved all our aims!” he shouts to general jubilation. And so it goes. And so much for the leadership of the proletariat.

Perhaps the most amazing thing about One a Minute is the gorgeous perfection of the print, scanned at 2K from the original 35mm nitrate negative in the Library of Congress’ Thomas H. Ince Collection. Very brief damage skitters up the screen at the 35-minute mark but otherwise this is phenomenally clean and sharp, showing off Bert Cann’s photography, the handsome sets, and the editing by future auteur Lewis Milestone. If the Library has more Ince negatives this pristine, let’s see them toot sweet.

By contrast, Bell Boy 13 is scanned in 2K from a 16mm duplicate negative and looks accordingly more fuzzy and worn, although still watchable. Cann is again the photographer.

According to IMDB, One a Minute director Jack Nelson was primarily an actor who also directed close to 40 silent features. Bell Boy 13 director William A. Seiter became a prolific director of comedies who worked with Wheeler and Woolsey, Laurel and Hardy, the Marx Brothers, Abbott and Costello, and Fred Astaire and Ginger Rogers. In both cases, the auteur is undoubtedly Ince, who “personally supervised” and had great directorial chops himself.

After achieving stardom with Ince, MacLean broke away and became his own producer for the rest of the silent era. His productivity slowed down but presumably became more careful. His most famous title might be the now-lost 1925 version of Seven Keys to Baldpate directed by Fred C. Newmeyer, who’d directed Lloyd in Never Weaken and Safety Last. Hmm, the Lloyd connections continue. MacLean retired from stardom but remained a producer and writer into the 1940s.

After Ince died under mysterious circumstances in 1924, his studio passed into the hands of Cecil B. DeMille and then RKO-Pathé, David O. Selznick, Desilu Productions and finally today’s Amazon Studios. As a nifty bonus on this disc, a promotional short presents a tour of the spacious Ince grounds with a cameo by MacLean. Hunt Stromberg, who was about to embark on a long successful career as a producer, directed this piece, modestly titled A Trip Through the World’s Greatest Motion Picture Studios (1920).

The shots of filming always show two cameras being run simultaneously; one is the A negative and one is the B negative. Some shots are tinted, and one scene discusses the tinting process. This spiffy image is scanned in 2K from a 35mm nitrate print.

Like the two features, this short boasts a new score by Ben Model that’s designed to sound like an old-fashioned theatre organ. Model produced the disc for his Undercrank Productions thanks to crowd-funding from 297 contributors on Kickstarter. It’s a swell way to put out silent obscurities that reward our attention. Maybe more from this MacLean fellow should follow, as apparently another handful or two of his efforts still exist. 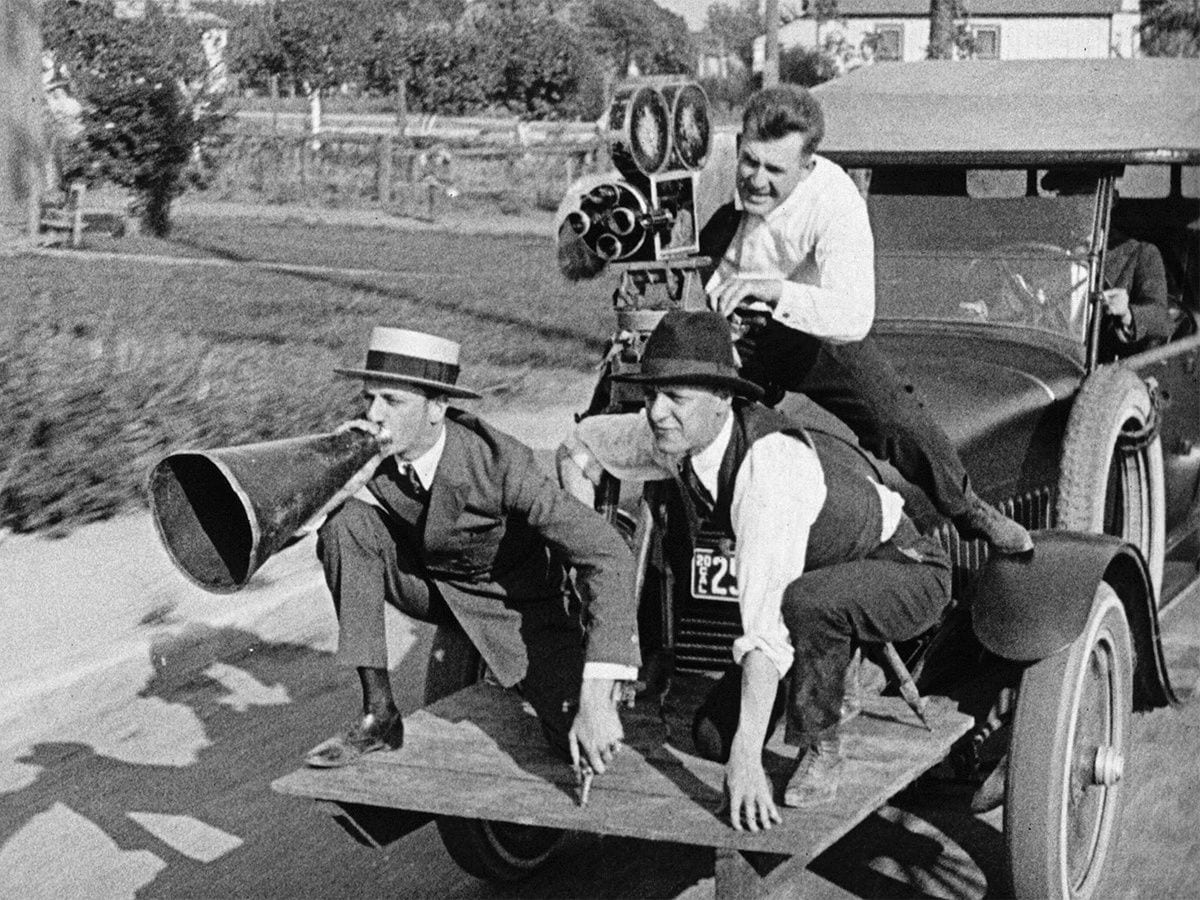 Filming a chase in A Tour Through the World’s Greatest Motion Picture Studios. [Photo courtesy of Undercrank Productions/Library of Congress]